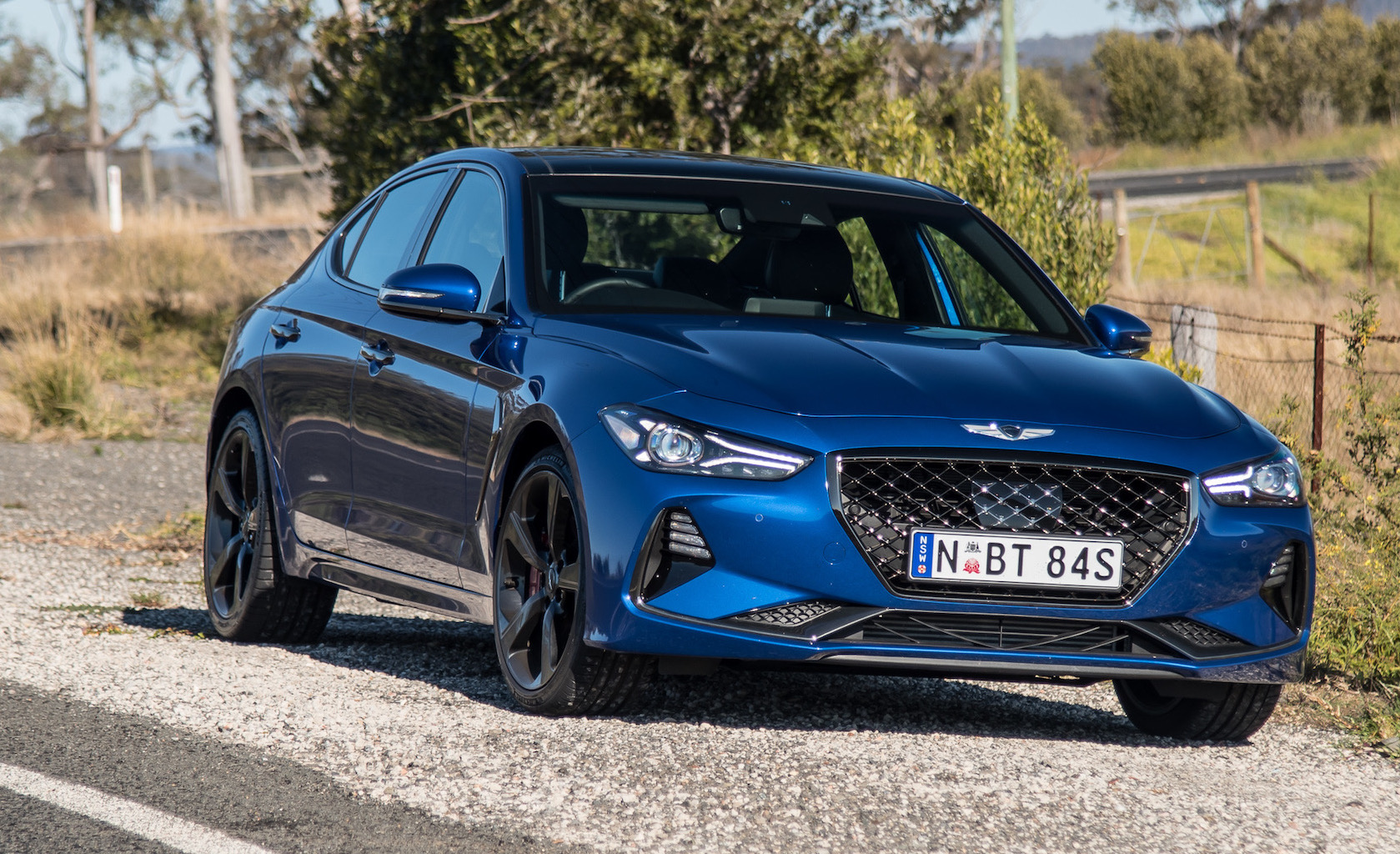 You would be forgiven for never having heard of the Genesis brand. If you haven’t, it’s essentially Hyundai’s new stand-alone luxury brand, similar to the setup Toyota has with Lexus. After a 12-month delay, Genesis finally opened its first Australian showroom in June this year, in Pitt Street, Sydney. Showrooms in Brisbane and Melbourne are expected to open in 2020. Here in Aus., the brand offers two models; the G70 mid-sizer and the G80 large sedan. More models are coming, including medium and large SUVs. 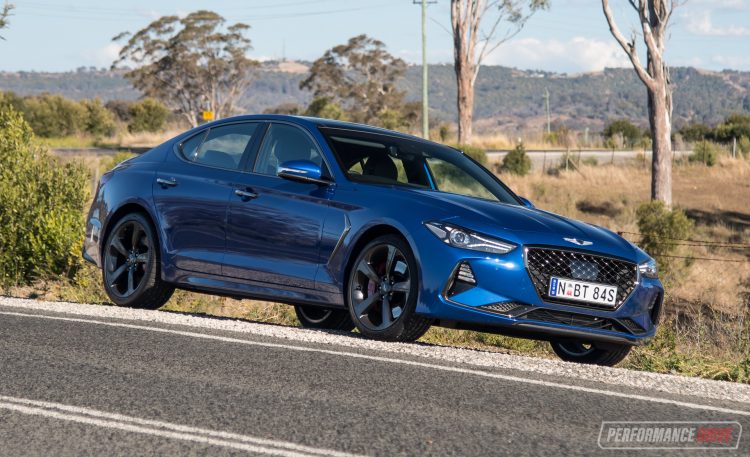 The G70 shares its platform with the Kia Stinger only it’s pitched as a more high-end product, taking aim at the likes of the BMW 3 Series and Mercedes C-Class. There are four variants available; the base model plainly named the G70, then the Sport, the Ultimate, and the Ultimate Sport.

There are also two engines to choose from; a 2.0-litre, four-pot turbo petrol, available in the first three variants. It produces 179kW and 353Nm. The second engine is a 3.3-litre twin-turbo V6 petrol ripper that outputs 272kW and 510Nm. This is offered in the top three variants. These powertrains are shared with the Kia Stinger as well.

There is no option for a manual gearbox. Instead, all models are paired to an in-house Hyundai-Kia eight-speed auto transmission and, like with most cars made for driving enthusiasts, all models are driven by the rear wheels. Here we’re testing the 2.0T engine in the Sport trim level. Prices begin at $63,300 (plus on-roads) 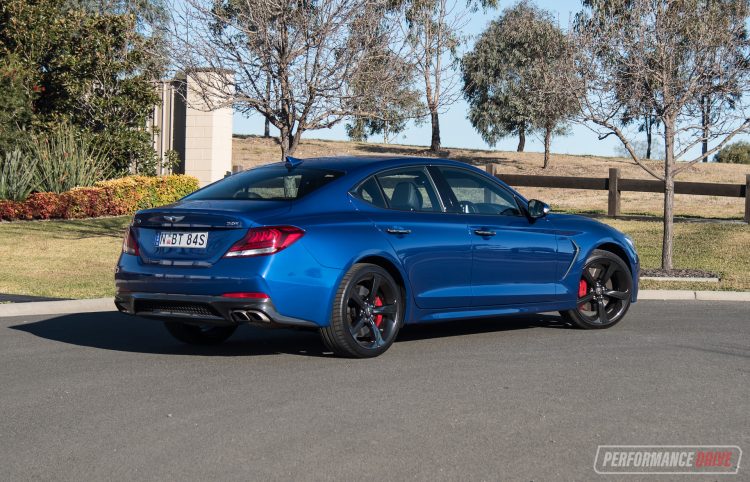 From a new brand owned by a budget-oriented car company, we think the G70 needs to push the segment boundaries in three important areas in order for it to succeed: design, technology and performance or economy. Looking at the design aspect, the G70 presents itself as fierce and athletic. The sternly-shaped headlights slope down to a large honeycomb grille, and countersunk fog lights inside a scooped lower bumper give it a distinct aggression. Can you see hints of Jaguar XE and Alfa Romeo Giulia? Bonnet ripples direct your eyes through to the rest of the handsome contours.

At the rear, the roofline gradually slopes down to the end of the boot, almost like a four-door coupe. From the side profile, we think it looks similar to the Mercedes-Benz C-Class, Audi A4 and BMW 3 series – which are the exact cars Genesis is trying to take on. The rear differs greatly from its Kia Stinger cousin, going for a more conservative and cleaner look. The boot line raises higher than the rear lights to flare a sporty in-built spoiler shape. 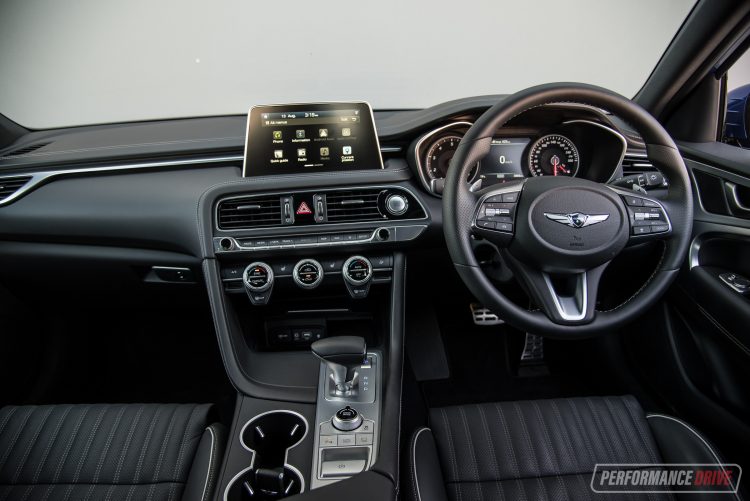 On the inside, your eyes are instantly directed to the beautifully presented quilted leather. From there, materials feel mildly upper class, and the layout is a little conservative and inoffensive. However, you do need to keep in mind the starting price does undercut most rivals. Selecting from a range of classy colours might help to add some flame. We like the brushed aluminium accents and the large analogue dials that surround the digital cluster display.

On the technology front, there are some shortcomings. The rather small 8.0-inch touch-screen looks like it’s been taken straight out of a budget-spec Hyundai i30, The resolution of the graphics falls behind the luxury rivals, too. C’mon, Genesis, if you want to establish yourself as a high-end car maker, don’t share crucial parts with a basic hatch. Even though this is not the flagship variant, it is still pitched in the same premium class. 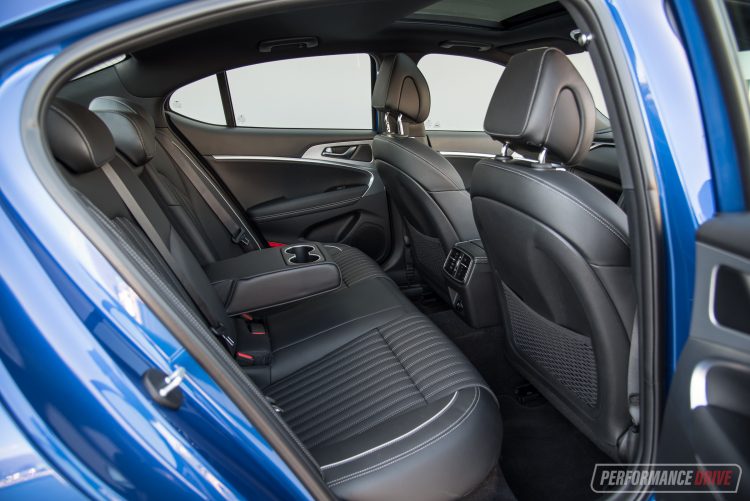 Luckily, there’s a suite of other technologies included in the G70 at no extra cost. Deep breath. It comes with blind-spot sensors, forward collision and pedestrian mitigation, rear cross-traffic alert, lane departure warning with lane keeping aid, distance-controlled cruise control, selectable driving modes, electric driver and front passenger seats, auto dipping high-beam, Android Auto and Apple CarPlay, digital radio, and wireless phone charging. Unlike others among the competition, the only item you can add as an option is a panoramic glass sunroof. It does miss out on rear collision mitigation and adaptive headlights.

The boot in the South Korean-built sedan is not huge. Although likely not highly important to most buyers in this category, it officially measures in at a measly 330 litres. Many rivals offer around 450L. Weirdly, the space doesn’t look as small as the volume figure suggests. 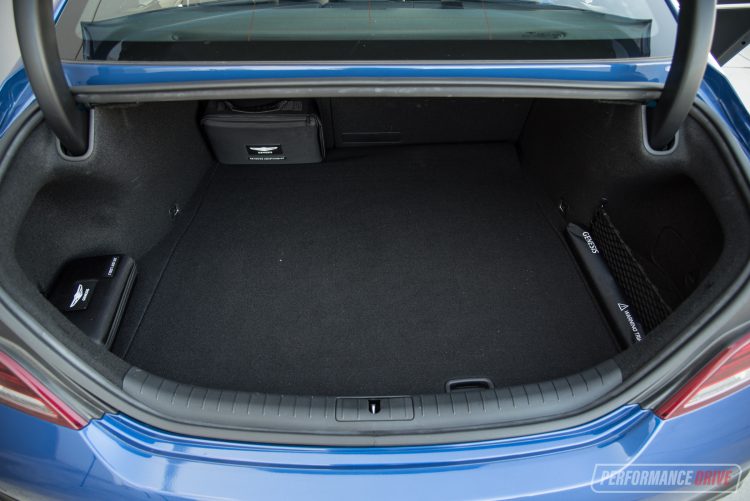 The naturally low-to-the-ground character means body roll around corners is minimal. When sport mode is selected, the computer relaxes traction control and you can throw the rear around a little before it takes control of the situation. Turning all the traction settings off is obviously where you can have lots of fun – on private roads of course!

Part of this is thanks to the Sport model’s standard mechanical limited-slip differential. The Sport trim also includes proper Brembo performance brakes, and different width tyres front and rear. At the front are 225/40 and the rear uses 255/35, with impressive Michelin Pilot Sport 4 tyres. 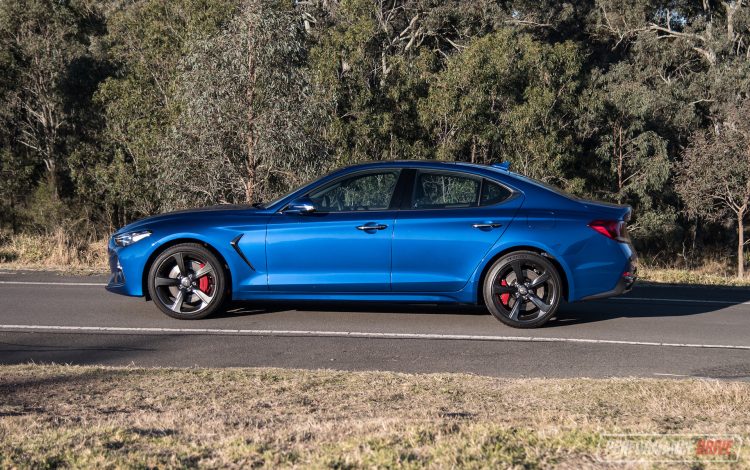 Steering feedback is adequate and inviting. And the steering wheel itself is a sporty three-spoke number with just the right amount of controls peppered over it. Going over bumps doesn’t seem to disturb the G70’s tracking or ride comfort. And this is all thanks to lots of Australian testing. Yes, although the G70 has been on sale overseas for about a year now, the Aussie-spec version comes with custom Aussie-spec suspension.

Genesis says it tested 14 different front damper setups and 30 different setups for the rear for the 2.0T models to ensure it offers the optimum configuration for Australia. The 3.3 V6 variants receive finer tuning and tweaks for the local market. Revisions were also made to the steering system to suit Australia. 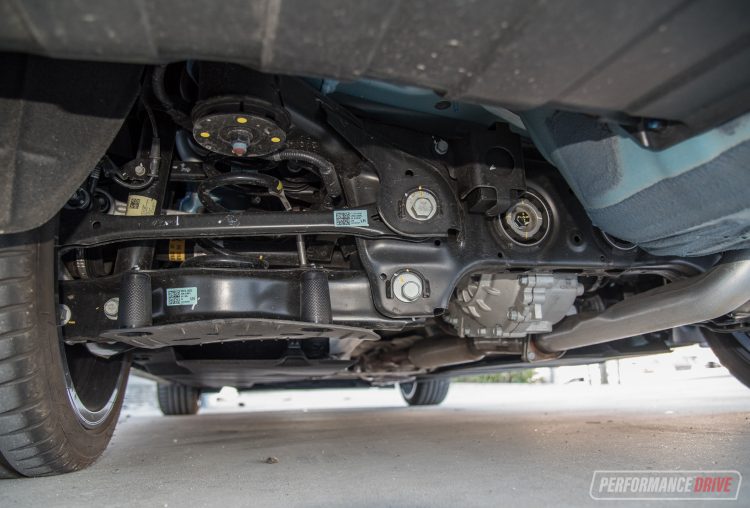 A 2.0-litre, four-cylinder might seem vanilla on paper, but keep in mind this is the entry engine. Many opening rivals offer something much weaker than the 179kW/353Nm offered here. Genesis says it’ll sprint from 0-100km/h in 5.9 seconds, and we tested it in a best of 6.71 seconds. It helps that the engine is capable of unleashing its maximum 353Nm of torque from as low as 1400rpm, and holds it right up to 3500rpm. This makes for willing and versatile drivability.

The eight-speed auto is mostly refined and organised. Even when in eco mode, it doesn’t upshift too early to higher ratios. Unfortunately for outright sportiness though the transmission doesn’t offer a specific manual mode, even though there are paddle shifters. And it will upshift automatically if you don’t – it won’t hit the redline. This is perhaps more excusable in the 2.0T but it is a bit disappointing in the V6 (full test on that coming soon). We love that a pesky start-stop feature has been omitted from the G70 lineup. 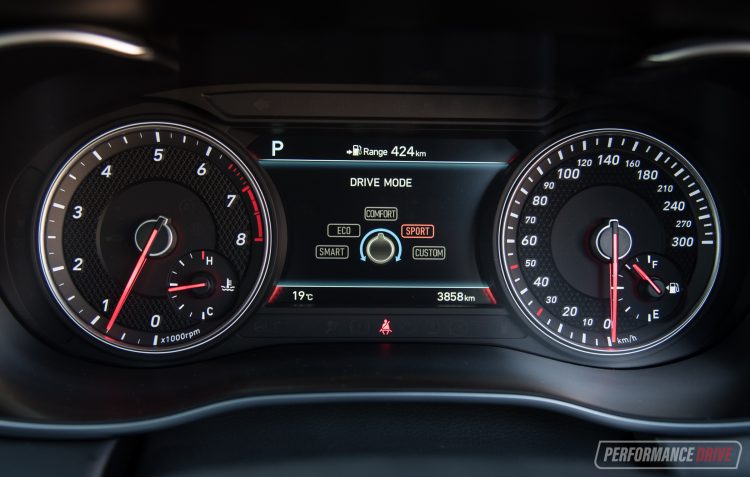 In our eyes one of the biggest fallbacks of the Genesis G70 is the fuel economy. Our tough testing achieved a fuel consumption average of 9.3L/100km, and the official rating is 9.0L/100km. This is just too high in our opinion, especially when you consider that it is the ‘vanilla’ 2.0-litre option. The Audi A4 2.0L four-cylinder option, producing a similar 185kW, offers an average fuel usage of just 6.3L/100km, for example. Even the new BMW 330i, which generates 190kW and 400Nm, offers an official average of just 6.4L/100km.

The G70 is a fair attempt for Genesis on the luxury car market. There are many things done right; the styling, the performance (even more so in the V6), and the generous feature listing. But we’d love to see a larger and higher-res multimedia touch-screen, and improved fuel economy from the base engine as tested here.

Like its head company, all Genesis models inherit one of the best warranties on the market, and certainly the best in this specific class. You get five years/unlimited kilometres. You also get five years of free scheduled servicing, and Genesis can deliver a loan car for you to a location of your choice during the servicing. All of this should be seriously considered when weighing up your shortlist.

CONS:
– Touch-screen is insulting for this category; too small and low resolution
– Fuel usage too high compared to the competition
– New brand means limited dealership network