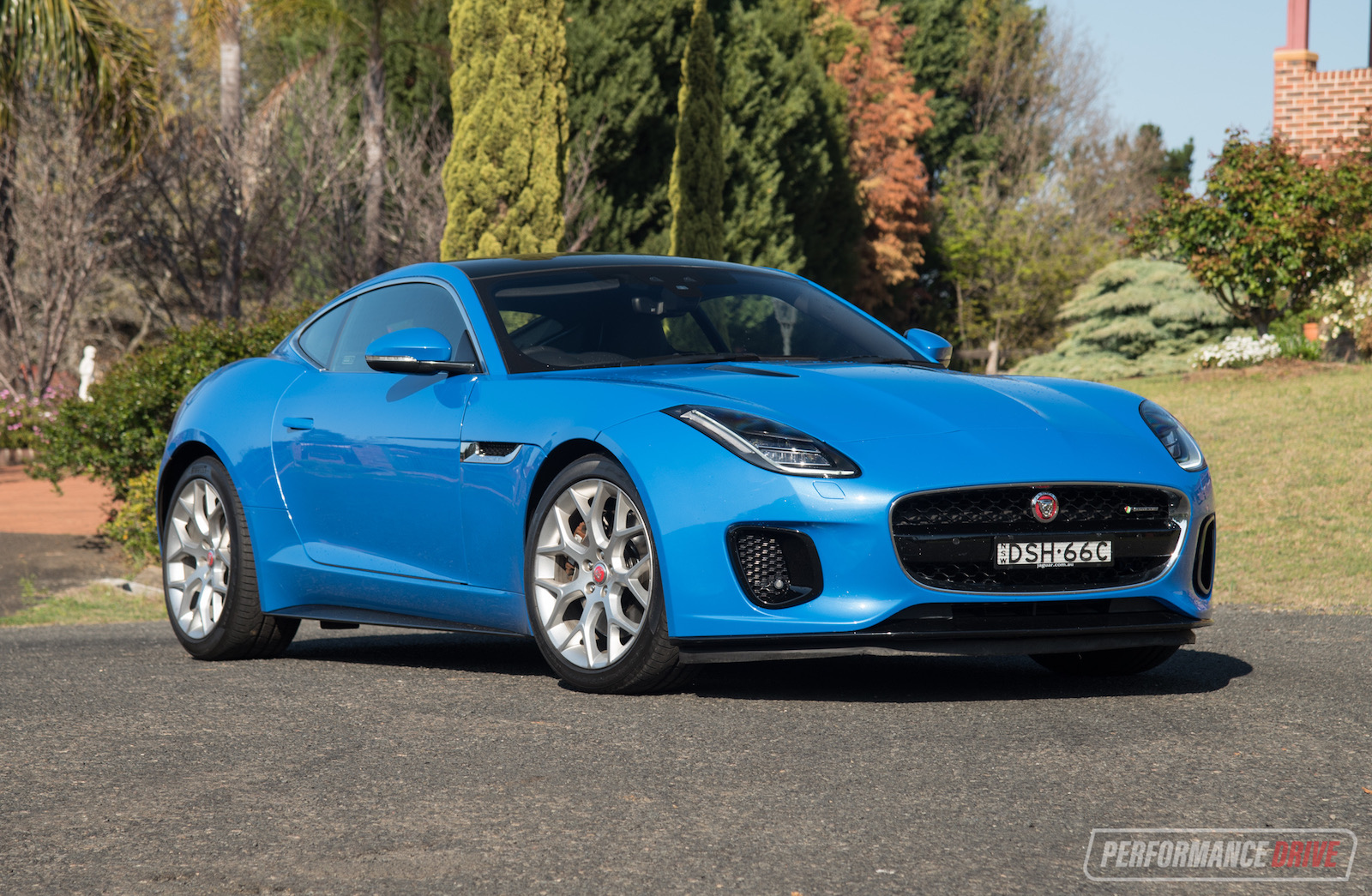 It wasn’t all that long ago when sports cars featured small-capacity engines and relied on lightness and agility for performance. Nowadays though, as modern cars become safer, more refined and comfortable, and filled with more technology, obesity is inevitable. But, some carmakers are trying to rekindle the spirit. 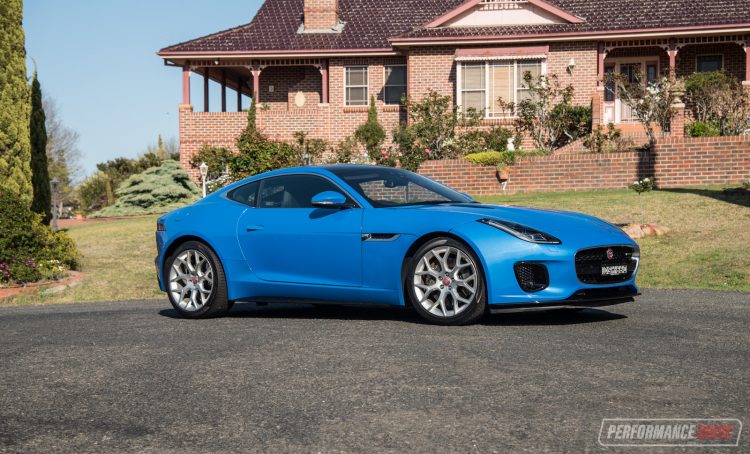 The Jaguar F-Type has to be one of the sexiest and most inspiring high-end sports cars currently on the market. And up until about a year ago it was offered with powerful supercharged V6 and V8 engine options. What we have here is perhaps the most fitting throwback to classic British sports cars; the 2.0-litre four-cylinder version. It is the lightest weight version yet, and arguably the purest version.

Jaguar introduced the four-cylinder model late last year as a way of lowering the entry price and thus the overall market reach of the F-Type. Prices open at $112,450 – the most affordable F-Type you can get. What you see here is the R-Dynamic variant which starts from $120,250. For reference, the most affordable (low-tune 250kW) supercharged V6 starts from $126,250 for the six-speed manual and $131,650 for the auto (all excluding on-road costs).

So, the question is, is it worth saving the circa-$11k over the auto V6 and going for this R-Dynamic 2.0T? Or will you really miss the extra power of the V6? Let’s take a look. 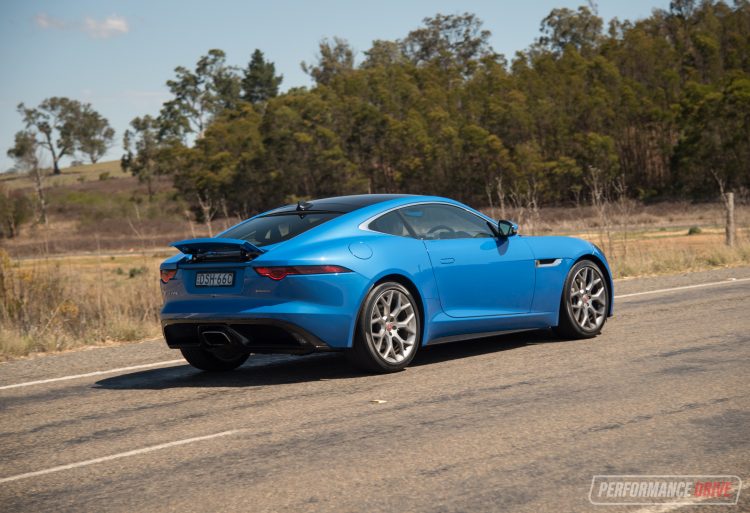 Since we’ve reviewed pretty much all variations of the F-Type over the years – from V6, V6 S, V6 400 Sport, V8 S, V8 R, and V8 SVR – we’ll try and keep this review specific to the engine and how its ‘most affordable’ status shapes up.

Under that long and empowering bonnet is one of Jaguar Land Rover’s ‘Ingenuim’ 2.0-litre turbocharged four-cylinder engines. In this tune, it is the most powerful four-cylinder Jaguar has ever made for a production car, developing 221kW at 5500rpm, and a strong 400Nm between just 1500rpm and 4500rpm. As far as 2.0T engines go, these stats are quite impressive compared with the industry standards. 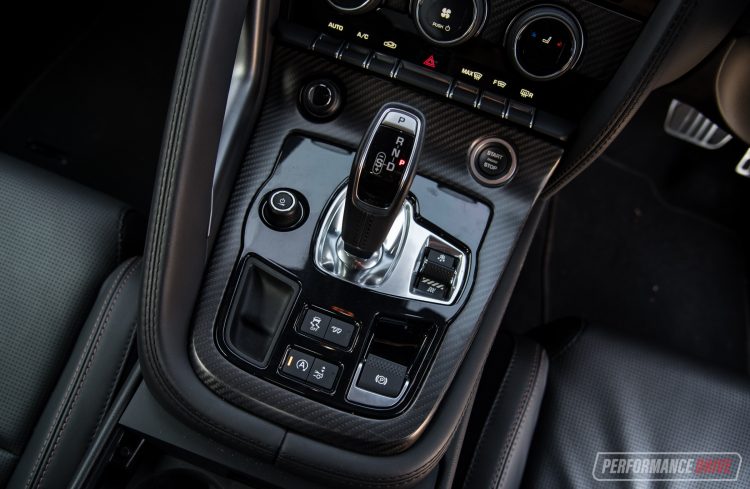 From the crank, power is sent through a ZF-based eight-speed automatic transmission and into a rear-wheel drive system. Jaguar says the eight-speed auto has been specifically optimised for the four-cylinder engine. And like the 250kW V6 models, the 2.0T uses an open differential but with torque vectoring technology to help with cornering. The 2.0T also uses a shorter final drive ratio of 3.55:1 over the V6’s 3.15:1 gearing to help with acceleration.

Other than a few other mechanical differences and changes to accommodate the four-cylinder (we’ll get to those later), this variant is still very much an F-Type. Inside you get an intimate and sporty cockpit with a driver-focused dash layout, an awesomely hunkered-down driving position that faces the same nice-to-grasp three-spoke steering wheel as featured in the others, and the same finely-detailed instrument cluster that retains analogue dials for a genuine look. 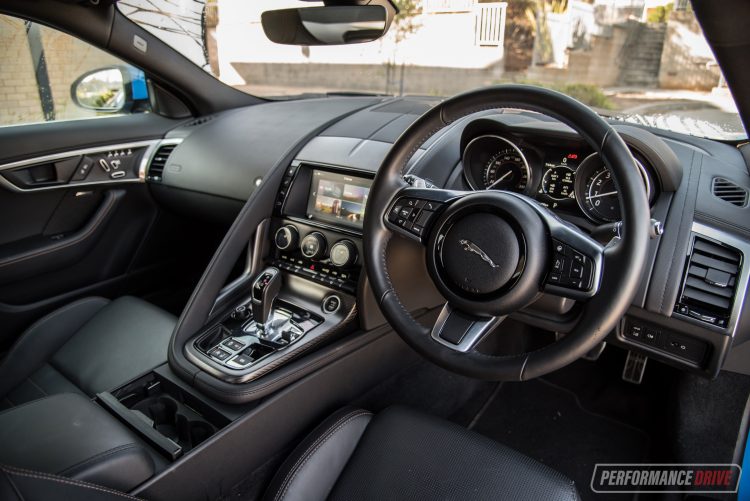 The R-Dynamic version adds some luxuries and bonus features, some of which are also optional on the higher-grade models. Driver attention warning, full LED headlights, and 19-inch alloy wheels (compared with 18in on the base model) are all included in the R-Dynamic. You also get a touch-screen media interface for the dash. It is one of Jaguar’s older systems and it does lack the crispness of the newer setups. However, it does come with in-built apps and the usual media functions.

There are still heaps of options that shouldn’t be options we feel, just like in the V6 and V8 models. A rear-view camera isn’t standard on this R-Dynamic and instead sets you back an extra $1060. Blind-spot assist is a further $900, and even keyless entry requires an additional $1200. This test vehicle has the panoramic glass roof option ($2110), a power boot lid ($1160), and digital radio ($640), among other things, to help spruce up the package.

Obviously the first thing you will notice when starting the 2.0L F-Type is the all-too-familiar four-cylinder thrum. There is a bi-modal exhaust option which, when activated, helps to provide a deeper growl. But from the inside it can be difficult to tell when it’s active or not. We think this is because there is some kind of electronic sound enhancement pushed through cabin speakers. From the outside though the difference in tone is like night and day (take a listen in our video below).

Driving casually as you go about your day-to-day errands, the car feels and sounds very normal. It’s not intimidating to drive at all, and all controls are light and easy to manage. To some interested buyers, this could be a key drawcard as the higher-end V8 models can be extremely touchy in terms of acceleration and throttle response. The V8s are also laughably loud. For those wanting something inconspicuous this might be the perfect option. 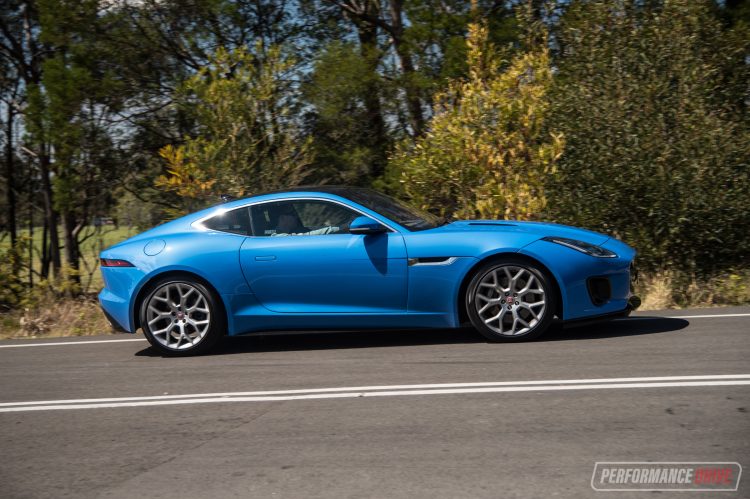 As we remembered from the previous F-Types tested, you do need to prepare to receive a ton of looks and finger-pointing as onlookers ogle the sexy design. This test car is coated in Ultra Blue, which does draw plenty of attention too. Paired with these 19-inch metallic silver wheels, we’re not sure this is the colour combination we’d go for. But, then again, if you’re going to buy an F-Type, you’re going to stand out regardless so you might as well pick an outrageous colour. Of which there are plenty to choose from.

It’s not until you really push the car that it all starts to make more sense, this 2.0T option. Jaguar has fit a smaller 63L fuel tank compared with the 70L tank in the 250kW V6. This, along with a more compact and lighter weight engine, helps to reduce weight. In fact, the auto version tips the scales at just 1584kg compared with 1716kg (tare), making it by far the lightest weight F-Type on the market. 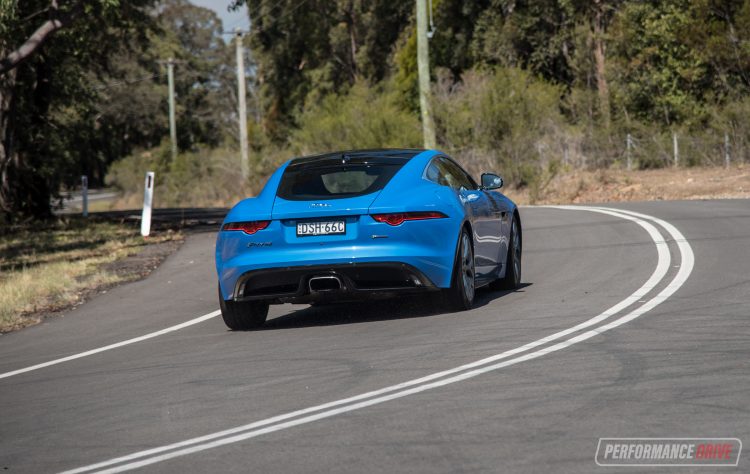 You can definitely feel that it is lighter on the front end through the excellent rack and pinion electromechanical steering. Tipping it into corners, particularly very tight ones, this model feels very agile. It also changes direction more easily, making switchbacks a real joy to navigate. There’s an entertaining, light-on-its-feet attitude to the way it takes on corners. This, again, makes it feel less intimidating than the others.

If there’s one downside to the front end lightness it’s that the nose can bobble around a little bit, especially as it travels over mid-corner bumps. We’re not entirely sure if Jaguar originally engineered the F-Type with a four-cylinder in mind, but weight balance and obviously suspension geometry would need to be fine-tuned separately between the V8 and this four-cylinder. The differentiation doesn’t feel like it is 100 per cent perfect. 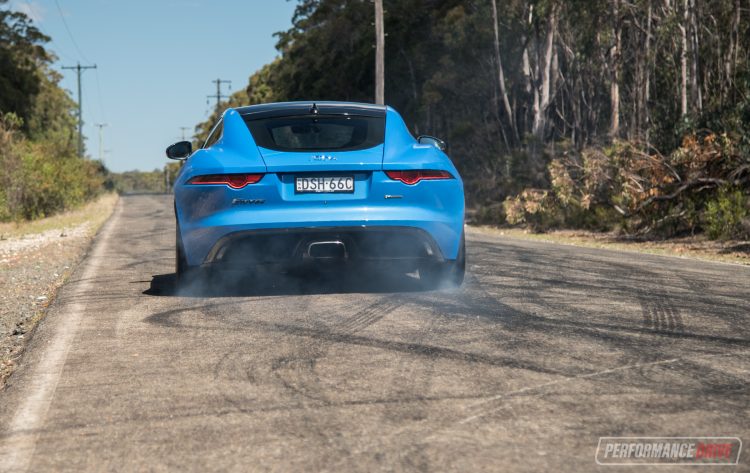 In terms of straight-line performance, we actually find this version to be just as fun as the others because you can actually use the full rev range and full throttle capacity. In the V8, if you apply full throttle and leave it, you’ll be passing the speed limit in no time at all. You might also be wrestling with the steering wheel as the rear end sketches and wheelspins up the road. Even with the stability control switched off this 2.0T version is very easy to control while still supplying a level of rear-end kick and playfulness.

Off the mark, using the launch control (building the revs on the brake), we clocked a best 0-100km/h time of just 5.89 seconds. It is surprisingly quick. In order to extract the most out of it you do need to be properly pushing it and reaching the greater reaches of the tacho. In other words, when you’re simply driving around town and being civilised, the F-Type 2.0T doesn’t feel all that quick. But if you want quick acceleration, it’s one of those cars that requires you to get involved and really give it a tickle. This makes it feel very interactive.

The F-Type is one of our favourite modern sports car. Yes, there are rivals out there that are more refined and more controlled on the limit. But none draw the same level of inspiration as the F-Type in our opinion. It looks so spectacular, too. Even some five years after it originally hit the scene.

As for the four-cylinder option? Well, it is the lightest weight and it will be appealing to the broadest market reach/driver types between all F-Types. However… our pick is still the V6 S with the 280kW output. It offers more than enough power for serious speed and powersliding malarkey, but what we love most is the howling soundtrack. In this, the turbo four-banger does sound good. But it sounds good in the way a hot hatch sounds good. We think this gorgeous design deserves something more than that.

PROS:
– That sexy, timeless, future-classic design
– 2.0T is surprisingly fast, and has an almighty bark
– Lightest weight F-Type on the market
– Agile handling and mechanical-feel steering
– 2.0T makes the F-Type more affordable than ever before

CONS:
– Lots of options, including some that should be standard
– Front end can feel bobbly over mid-corner bumps
– It’s hard to resist the V6 and V8 options