The awesome new Jaguar XFR-S sedan has made its public debut at the Goodwood Hill in the UK, with a roaring burnout and demonstration run up the famous hill climb. 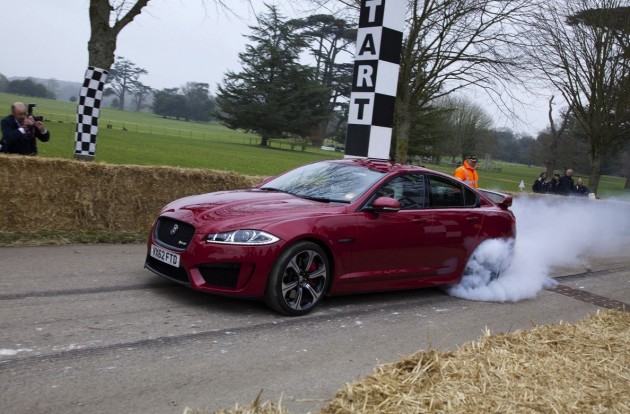 As previously reported, the Jaguar XFR-S is the company’s most powerful high performance sedan. It comes with the same 5.0-litre supercharged V8 as seen in the XKR-S coupe, producing 405kW of power and 680Nm of torque.

This kind of power output puts it very close to the BMW M5 (412kW/680Nm) and the Mercedes-Benz E 63 AMG (410kW/800Nm), both of which have been leaders in the outright power wars in terms of luxury sedans.

The red example was shown at the special Goodwood event along side various other classic Jaguars prepared by Jaguar Heritage Racing.

As far as we know, Jaguar Australia is still analysing a potential business case to determine whether it will be introduced locally. Narine Salmasi, Jaguar Australia marketing and public affairs specialist, previously told PerformanceDrive that at least one example will make its way to Australia for media purposes.

Click play below to see the hot new cat in action. The car will appear at the upcoming Goodwood Festival of Speed in July.