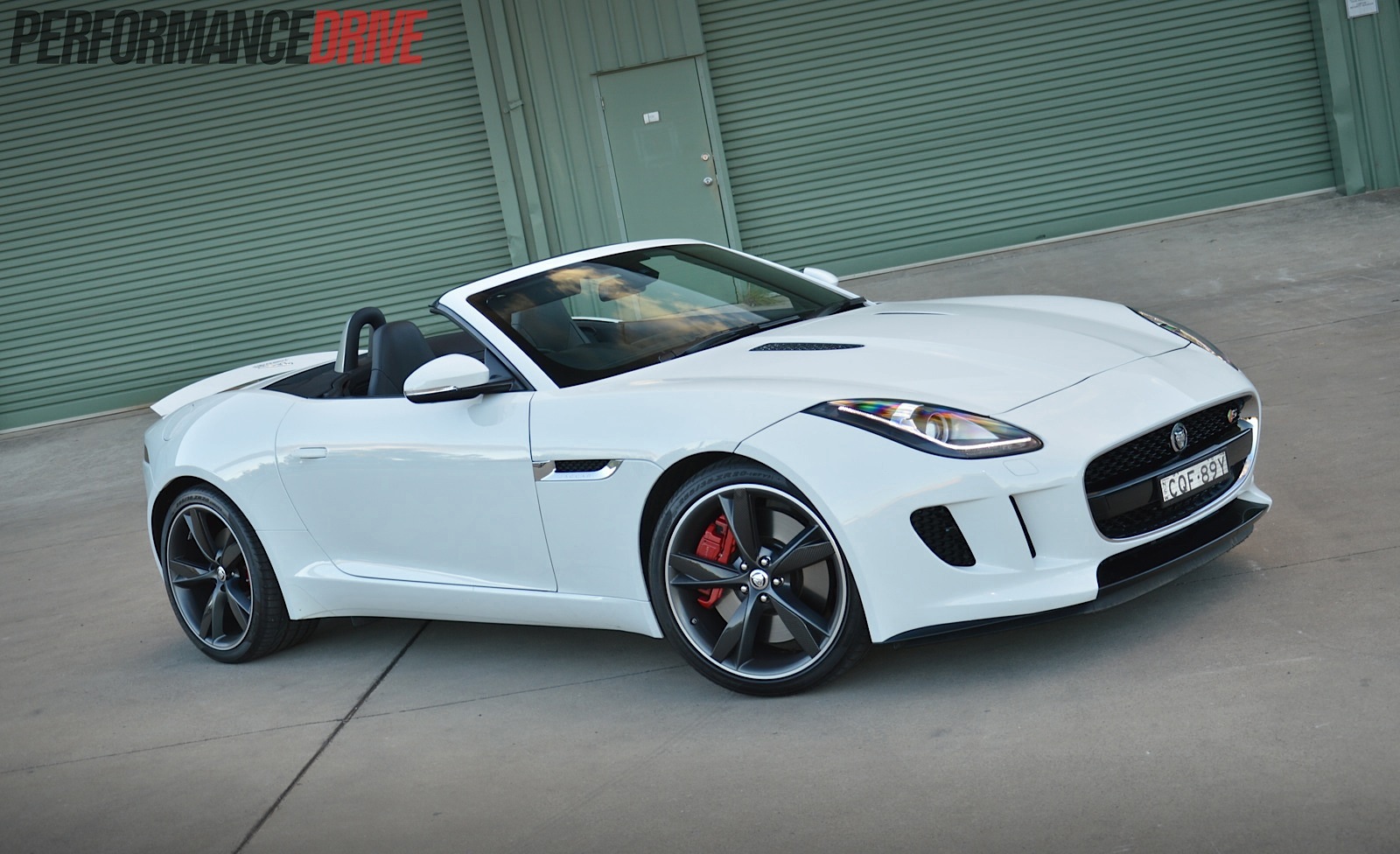 Every once in a while a special car comes along. One that really knows how to excite you, and knows what you want. It doesn’t just drive you from A to B. It helps create some of the most memorable driving experiences of your life. Welcome to the Jaguar F-Type V6 S. It is one of those cars. 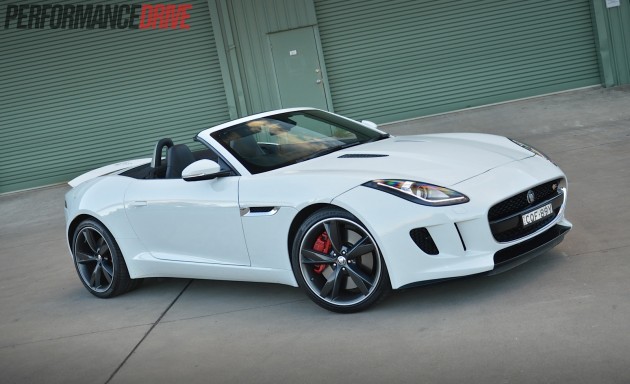 It’s hard to believe the F-Type has been on sale now for over a year. It still looks as modern and as fetching as the gorgeous C-X16 concept car that inspires it.

Perhaps the biggest change in the past year is an expansion to the range. There are now four different model variants on sale, including convertible and coupe versions. The lineup spans from a 250kW V6, a 280kW V6 S (as tested), a 364kW V8 S, and a flagship V8 R which is only available as a coupe.

The mighty R provides drivers with the opportunity to explore what it might feel like to be the god of thunder, with its 405kW V8 tune. That’s not to say the V6 S is the shyest student in the sports car class. 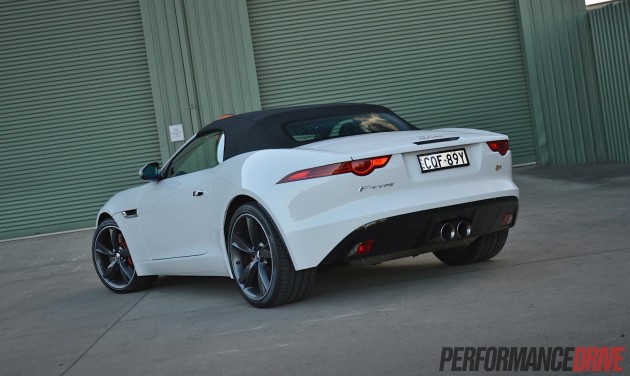 Jaguar has really stepped up its game when it comes to interior quality and fit and finish. In the F-Type there’s nothing that you can see that looks or feels cheap or like it’s going to break in a few years. Aside from maybe the centre cup holder lid. But you tend to sweep that under the rug.

The centre dash fascia is supported by a solid pillar that gives the dash a sturdy and strong look, and within this are all of the on-board controls and switchgear. You have to love the cool 007-like climate control knobs that have little windows to display the temperature settings, and the way the main air-con vent rises up when you turn it on.

Seating can be a little tight, especially if you’re… substantially proportioned. For a strict two-seater you can’t expect much more though. The seats themselves are rather boring to look at we think, however, when you actually sit in them they hug you in just fine and provide firm support in the corners.

All of the switches and toggles follow a similar theme and all feel like they have been set in billet steel. Most of the centre dash is covered in what feels like a blend of carbon fibre and leather, and there’s heaps of soft-touch surfaces and leather around the place. We wouldn’t call it a warm and cosy cabin environment. It’s more of a business class suite with crisp furniture, modern details and electronics, with some contemporary artwork on the walls.

Like some of the other high-end manufacturers Jaguar enjoys providing customers with options. In fact, it recently set up a dedicated Special Operations division which can do everything from restore your classic Jag, to liven up a modern model with custom features.

Before you go that far though with the F-Type V6 S you do have an extensive and subsequently exhaustive list of options to select from at the dealer. We’ve noticed some items on the list are quite interesting, while others should really be part of the standard equipment package.

The 20-inch ‘Blade’ alloy wheels on this test car that make you weak at the knees – with their carbon fibre spokes – will set you back $6800 – a reasonable cost for pure exotica. However, you might want to think twice about spending $960 on black brake calipers, or paying $1750 for a rear-view camera and parking sensors – it’s a bit unreasonable for Jaguar not to offer these as standard on what is a $170,000 vehicle, especially when this is Toyota Corolla stuff.

One option that is highly recommended is the Active Exhaust with dual modes. Jaguar asks just $260 for this aural bliss. This is exactly the kind of options that Jag should be offering – stuff that certainly isn’t available on a Corolla. When you hear the sound it barks out in the video below you’ll understand what we’re talking about. 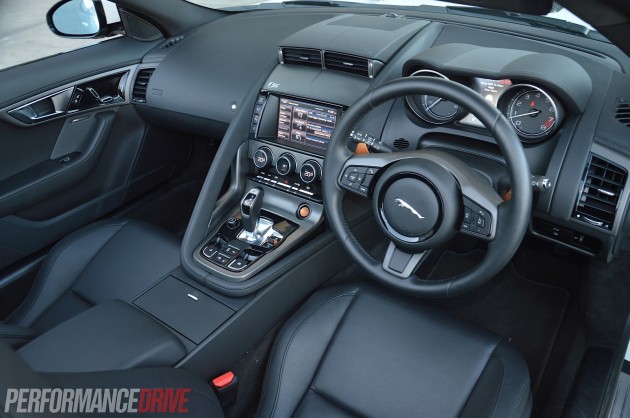 Sitting deep down in a high-end sports car is one of the greatest pleasures in life in our opinion. In the F-Type, goosebumps are as prominent as ever. Fire up that supercharged V6 and you’ll find your vision goes blurry for a second as your brain is mesmerised by what has just begun. It sounds nothing short of spectacular, bringing a real theatre and excitement to your morning.

When you click the sturdy gear lever into drive you get your first experience of the connected and direct character of the powertrain and the ZF eight-speed auto. It feels prepared and ready to go. There’s no delay going from park to drive, and no slack to be taken up when you first feather the throttle and set off. You quickly learn, this is a responsive machine.

To make things even more responsive there is a Dynamic driving mode you can select near the gear lever. This tightens everything up, including the suspension, the throttle and steering sensitivity, and it opens up the bi-modal exhaust – if you ticked that option box at the dealer like we recommended.

At this point of the F-Type experience you realise this is your day and you know you are going to have a good one. If you don’t believe it, the countless passersby that are either taking a photo or winding down their window to grab an earful of that engine will surely convince you. 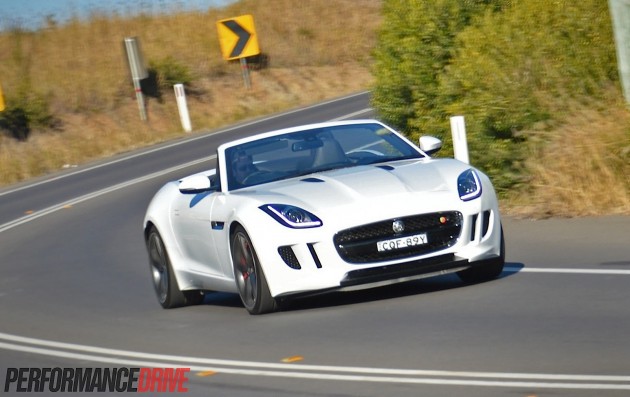 Technically and mechanically the F-Type is a superb driver’s car. The steering is precise and responsive, and you always know how the tyres are reacting to your inputs. Surprisingly, it’s not an intimidating car to drive fast either, despite the initial suspense and buildup.

We may have said it before in the regular V6 model review, but we’ll say it again; you can throw the F-Type around like you’re driving a Mazda MX-5. It’s balanced, easy, and forgiving, yet in another world when it comes to serving up lashings of lateral g-force.

The tight limited-slip differential means powerslides are easy and long-lasting. Conversely, grip is stupendous, especially with the optional 255mm and 295mm tyres. Even if you prefer to conserve the rear tyres you can still lean hard on the power around corners and it simply hooks up and rails around.

We can’t really fault the F-Type’s driving character. It’s a pure driver’s car. The suspension setting is taut and may come across as a little too firm for some buyers who have mistaken the F-Type for a luxury car, but for performance, it soaks up and absorbs mid-corner bumps like an Olympic skier’s knees on a tight slalom course.

The only question you’re left with is, would you be happier with the more powerful V8 S? If you like to explore the outer limits of your machines and like to use all of the available power more of the time, go for the V6 S. If you’re a bit lazy and prefer to use only the throttle instead of steering finesse and the throttle to steer the car, go for the V8 S. 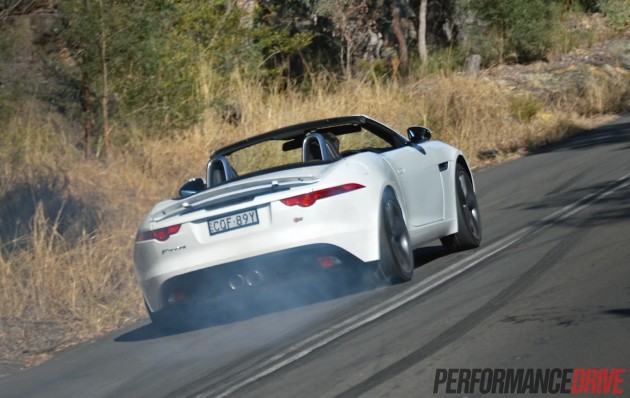 The V6 S is a perfect balance between power, speed, and useable performance in our opinion. The V8 S is extremely quick, almost too quick for anything but a race track. With the V6 S you get 95 per cent of the thrills only you can actually explore its limits without hitting warp speed or completely destroying the rear tyres.

You probably won’t agree with us, but, if given the option, we’d take the V6 S over the V8 S as an everyday car. It sounds just as good and the handling and total breadth of ability is close on the tail, only the rear tyres don’t cry every time you go near the go-pedal. The fuel consumption is liveable and acceptable for daily commuting too, unlike the sculling-master V8 S.

As always, take one (or both) for a proper test drive and see what suits you most. If you have access to a track, tyre shop, and magic recuperating points for your licence, the V8 S convertible is definitely one of the most exciting performance cars on the market. We love it. But if you’re after something a touch less flamboyant but just as enjoyable, go for the V6 S. It is noticeably more complete than the base 250kW V6 as well.

CONS:
– Boot can barely swallow a bottle of milk
– Some options that really shouldn’t be options on a $170k car 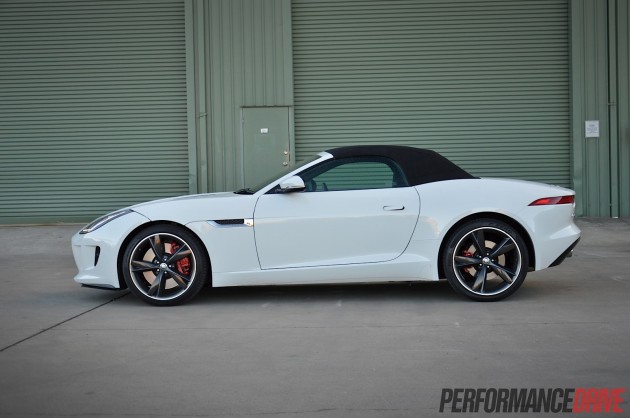 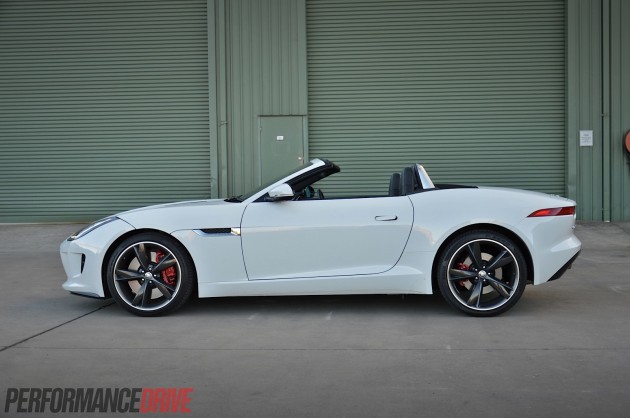