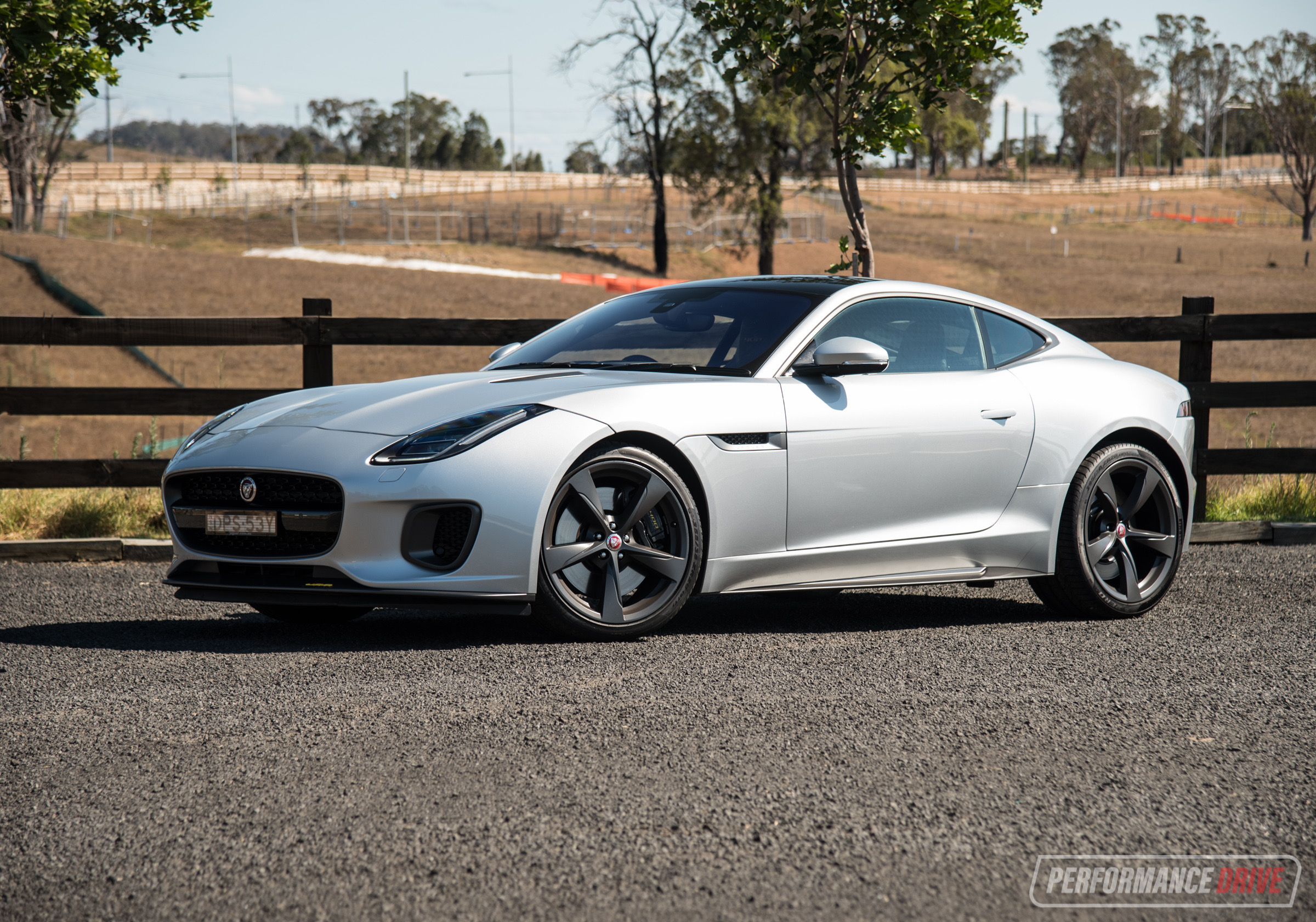 Welcome to the most powerful V6 Jaguar currently on sale. It’s called the Jaguar F-Type 400 Sport, and it is, in our opinion, the best-balanced sports car in Jaguar’s current showroom. 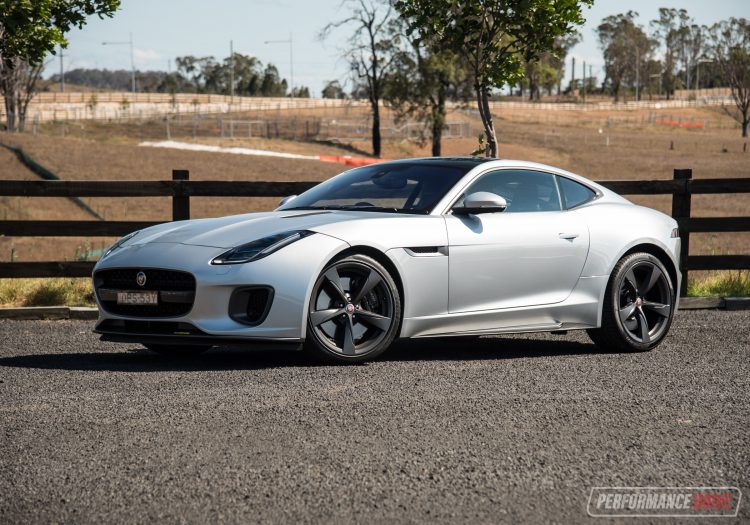 The 400 Sport (aka 400S) has been launched to celebrate the release of the MY18 range and it’s up for grabs for one year only. It comes with a tweaked version of the F-Type S‘s 3.0-litre supercharged V6, producing 294kW (400PS). This engine does come in 250kW and 280kW tune, but here it is one of the industry’s most powerful V6 petrol engines.

Aside from the tweaked engine, the 400S also adopts a range of tasteful styling enhancements. It’s not a subtle car, the F-Type, but the 400S pack seems to bring a certain level of modesty to the mix, albeit with a constrained attitude that’s still ready to pounce.

Jaguar Australia is offering the 400S in coupe and convertible form, and with rear-wheel drive or all-wheel drive, missing out on the six-speed manual option offered in the 250kW model. What you’re looking at here is the coupe with rear-wheel drive. Prices for this start at $183,512 (excluding on-road costs). 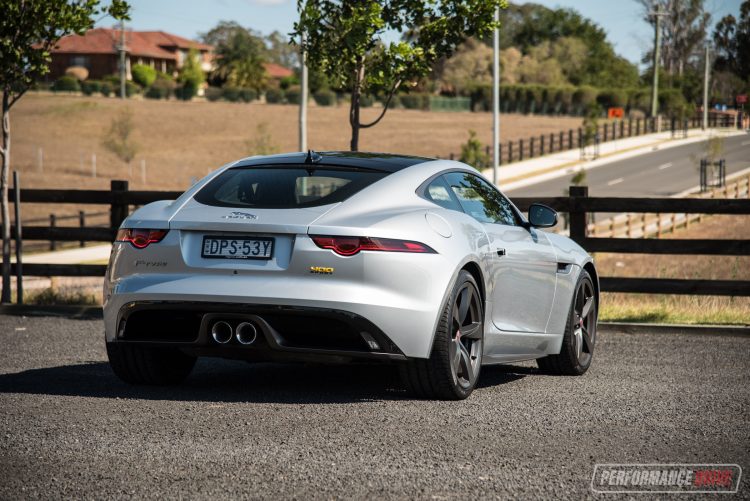 We think the 400S is awesome for a number of reasons, but one of the main attractions for us is the cool sinister style it conveys. Sure, you can get a red convertible V8 model and pose around and everyone will look at you. But in the 400S you can sneak past under the radar, somewhat, especially in this test car’s colour combination.

The body is coated in Indus Silver metallic paired with ‘Dark Satin Grey’ 20-inch alloy wheels measuring 9.0 inches wide on the front and a fat 10.5 inches on the back. Satin grey is also used for a number of discreet ‘400 Sport’ badges, contrasted with yellow, such as on the front spoiler, the rear, and on the brake calipers.

Jaguar hasn’t really given the interior a major update since launching the F-Type in 2013, and some areas are starting to age a little in our opinion. Whereas fresher cars will do without buttons and knobs and instead incorporate functions into touch-screens, the F-Type cabin still has plenty of good old generic-shape buttons around the place. 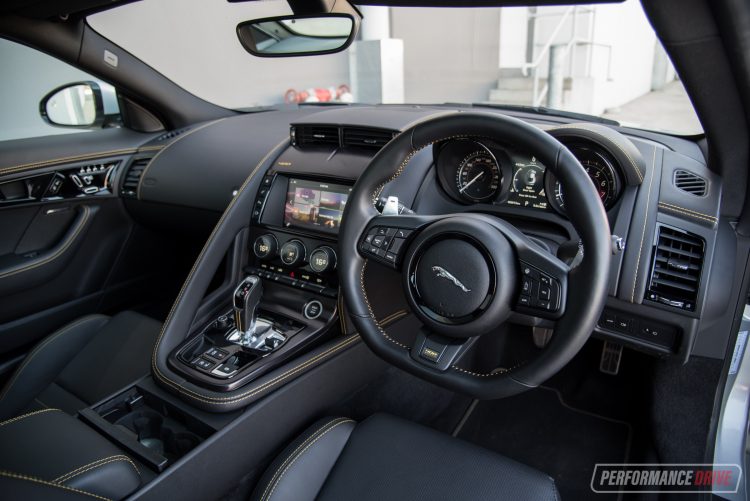 Up on the dash is an updated JLR media interface though, called Touch Pro, incorporating nice graphics and decent operability. There’s also a page of in-built apps, including an interesting app called ReRun that connects the car’s data to GoPro video recording. This is perfect for drive day enthusiasts, allowing you to compare and show off your driving skills to your mates.

Stepping inside is an experience in itself as you need to crouch right down, and once you’ve clumped into place, the car is just waiting for you to depress that pulsing start button. You get a very low and submerged seating position which definitely adds to the in-car theatre and excitement. This is a sports car that’s almost boarding on being a supercar, just by your impressions sitting inside.

Seating space is okay, with good legroom thanks to the traditional long-front sports car layout. Headroom could become an issue for tall people due to the super-low swooping roof. In fact, the F-Type coupe stands just 1.3 metres tall overall. Cargo space is also very limited. Limited to 310L, which doesn’t even compare well to the equivalent rear-drive Porsche 911 that offers 405L in the front boot. There is a decent-size centre console box though and a couple of cup holders, with space to put your phone and so on. 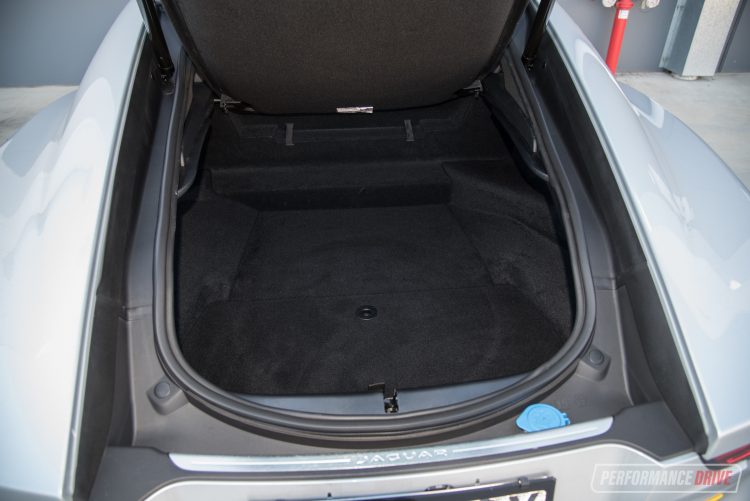 We’ve always liked the V6 over the V8 counterpart. Yes, the V8 has the noise and you can smoke the rear tyres at a mere flinch of your right ankle. But, the V6, especially in S form with 280kW, provides a more balanced drive in our opinion.

There’s still noise, you don’t have to worry about that. There’s a bi-modal exhaust available with button operation. With it disengaged it’s quiet and sounds a bit funny, but very reserved and you should be able to remain friends with your neighbours. With the exhaust open it’s a firecracker on wheels. Barking, belching, and crackling like a popcorn maker. It’s very exciting. We also like the twin centrally-mounted exhausts on the V6 models, harking back to the classic E-Type, unlike the twin separated exhausts on the V8. 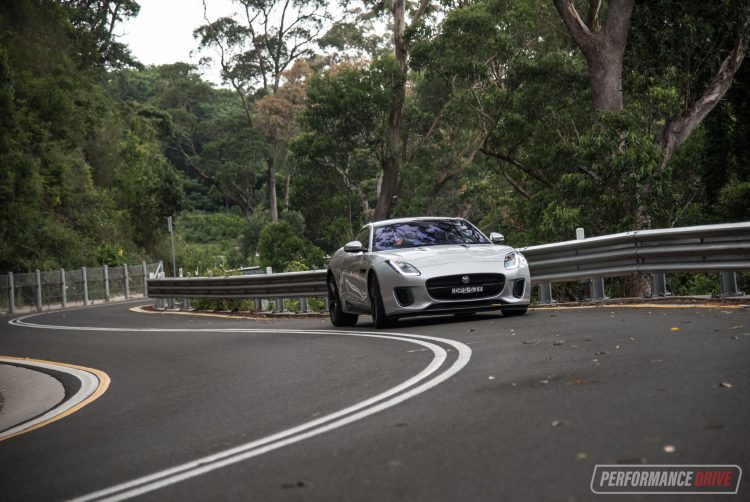 Up in the mountains the F-Type is seriously committed and reassuring. It is not a car you need to be overly delicate with, like in a BMW M4 for example. You can concentrate on threading the nose where you want to go with the steering wheel, and get away with applying a little too much throttle on the odd occasion.

The front end grip is good, with gentle push-understeer if you follow a smooth racing line with excess speed. You can unbalance the car by giving the sharp and precise steering a quick flick. Then it’s just a matter of pouring in some beans and it’ll kick sideways. There is a tight limited-slip differential on the 280kW and 294kW models, but 250kW version misses out.

With 294kW you do notice there is more top-end power compared with the 280kW version. And this comes in handy when you’re undertaking in such horseplay. Peak power is reached at the same 6500rpm, but peak torque, stretched from 450Nm to 460Nm, is available between 3500-5500rpm instead of 3500-5000rpm. This allows you to hold a slide more easily and play with the angle. 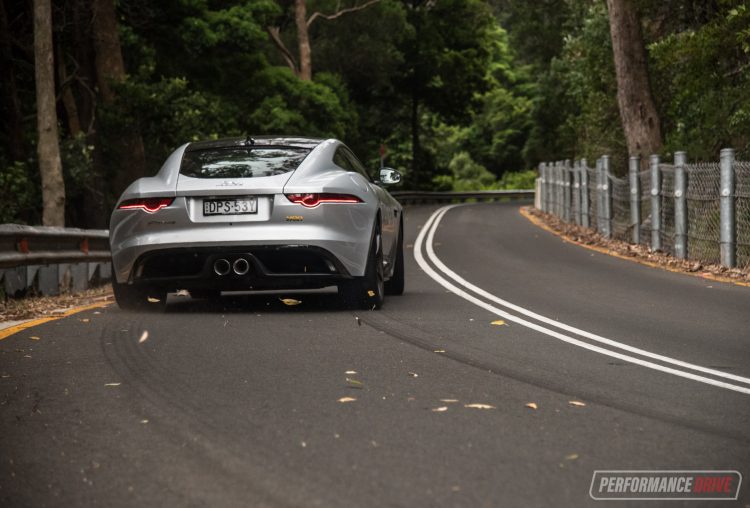 Matched up the engine is one of the best automatic transmissions on the market. It’s the famed ZF eight-speed that’s used by a number of carmakers, including Audi, BMW and even Ferrari. Obviously they each apply their own management, and in the F-Type the calibration is spot on.

Manual shifting via the perfectly-positioned paddle-shifters makes it feel like a sequential transmission, and there’s even that must-have fart between upshifts. Downshifts are instant and accompanied by a neat little prick of throttle for rev-matching. If you’d rather leave it to its own choices you have D and S modes to utilise. In D it behaves like a well sorted automatic, while in S the upshifts are held off for a bit longer and it’ll step up the aggression with its own downshifts.

With the 400 Sport you get some eye-popping brakes, called the Super Performance, which stop on a dime, every time. The F-Type coupe weighs in at 1720kg, which is on the porkier side compared with the Porsche 911 (1421kg, auto) and the BMW M4 (1542kg, auto), but even still, repeated abuse showed no sign of fade or pedal drop during our tests. 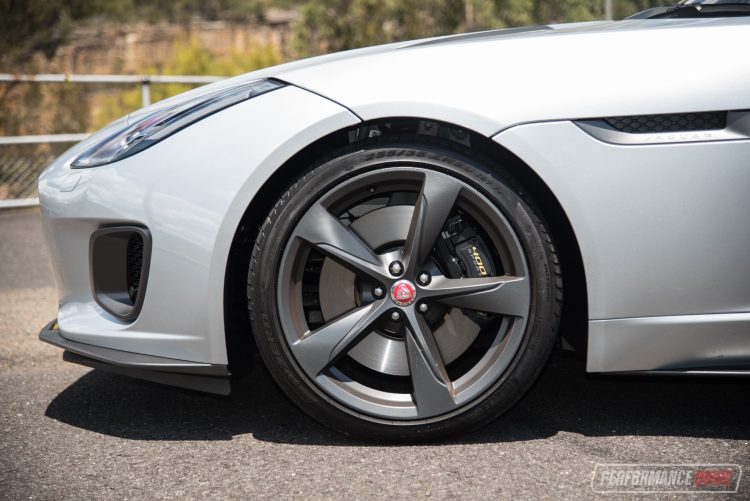 After you’re done with your Sunday morning blast, which you’ll likely get into a routine for every week, the V6 can have a civilised side. It can be quite economical, is what we’re saying. In mostly highway driving conditions and just cruising around we saw the fuel average drop to as low as 8.2L/100km, and then around 9.5L/100km in mixed conditions with a bit of playing about. This is excellent for a car of this calibre.

What kind of calibre are we talking? Across the standard 0-100km/h sprint our Vbox returned a best time of 4.96 seconds, and the quarter mile in 13.25 seconds. These times are definitely quick enough to produce proper thrills behind the wheel, and all the while you remain sane and part of society. The V8 and SVR variants are in a different league and should probably be avoided unless you have close access to a circuit.

The 280kW F-Type S was our favourite Jaguar. Now it’s this. We love this colour combination, the central-outlet exhausts and the crisp and vicious-sounding engine. We also thoroughly enjoy the overall balance the 294kW engine brings. If you want oversteer, this can be served up. If you prefer more sensible driving manners, it can do that too. More so than the V8 models.

Would we buy one over the competition, i.e. the Porsche 911 and BMW M4? Well, the F-Type definitely wins on design. It is, even now a few years old, still one of the sexiest and lusty car designs on the market. Put it this way, if you want some pizazz and adventure even driving around the city, the F-Type is the best out of these rivals. For outright driving purity and Germanic precision, go to the 911. For interaction and engagement that requires you to do the driving, take the M4.