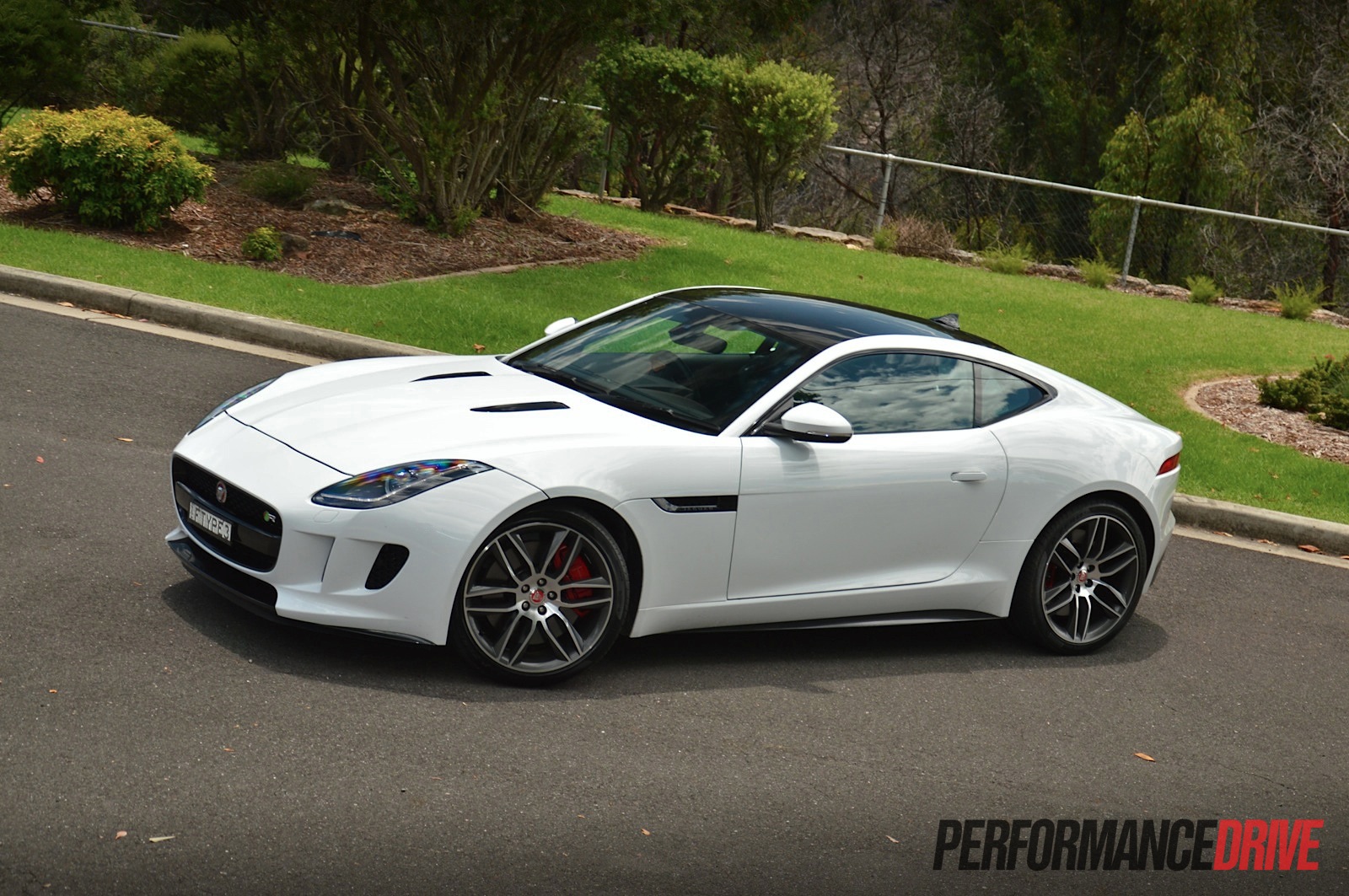 You just know this is going to be one of the great classics of the decade just by looking at it. It’s the Jaguar F-Type R Coupe, and it’s been designed as a modern, 404kW interpretation of the stunningly sexy E-Type of the 1960s. You can probably guess what it’s going to be like. 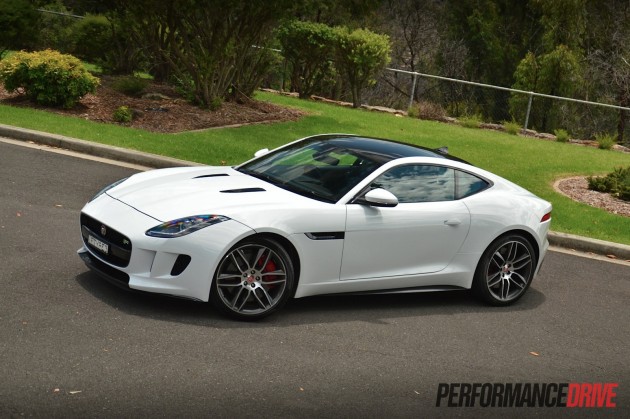 Jaguar offers the new coupe – which comes after the release of the F-Type drop-top convertible – with three different engines. All of them are supercharged, of course, with a 250kW V6, a 280kW V6, and this, the beastly 404kW V8 ‘R’ version. You can’t get the R in drop-top form.

Surprisingly, the British marque has just introduced a four-wheel drive option for some variants and a six-speed manual believe it or not. This is an interesting move by Jag, showing how serious it is about taking on its main rival; the Porsche 911. Well, we can safely say the Jaguar trumps the iconic German legend on design, that’s for sure. 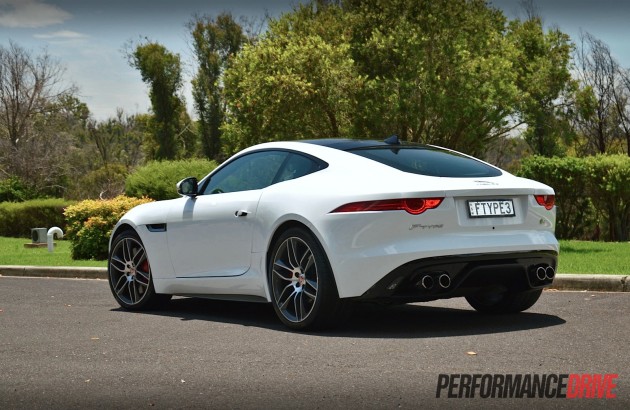 This is the first time we’ve driven the coupe, and immediately there is a heightened sense of sportiness sitting in the cabin. With a fixed roof the interior feels lower and more closed in, like a supercar. In that sense it’s a bit more intimate in here – you just want to take it for a romantic drive at night and go up to that special lookout spot and mate with it… or maybe that’s just us.

Sitting solidly in the middle of the dash is a centre stack which is slightly skewed toward the driver. It’s braced with a little beam that can also double as an extra grab-handle for the passenger. Within the centre stack is a touch-screen interface bringing sat-nav facilities, various driving functions, and settings for the climate and audio system. It’s a nice touch-screen setup, with big clear buttons and a handful of jump-to buttons for making quick selections while on the go. The sat-nav system is also quite easy to use and seems accurate and helpful.

The audio system, which is a 10-speaker unit, produces decent sounds from either MP3s or USBs. If you do like loud and powerful music though we would suggest opting for the 770-Watt 12-speaker unit. The standard setup doesn’t exactly blow your mind in our opinion.

Ride is firm and direct, which is fair enough for a high-end sports car, but there is very little give in the seats. Long journeys can become uncomfortable due to their hardness. We can’t quite understand why Jaguar has gone for such a firm setting. You only need to take a look at vehicles from HSV to see it is possible to have cushy and comfy seats that are very supportive as well. Obviously, Jaguar would want to ensure they look as sleek as the rest of the car.

Overall, the cabin lets you know you’re in a very high-end vehicle. Quality materials are used for almost all components, except for the cheap plastic cup holder lid. The dash fascia also features some fake carbon fibre trim – come on Jaguar, surely it deserves real carbon fibre? Fit and finish seems strong and durable though, and every panel and trim join is tight and precise. There are a few exotic touches as well, such as a gold start button, a rising centre air vent, and cool see-through climate control knobs showing a digital display.

Cabin space is reasonable for a sports car. The driver gets a submerged position with a steering wheel facing perfectly at the chest. Headroom is decent and legroom will only be a problem for really tall people. In the back it’s not so accommodating, with an already-small boot taken up by the spare wheel. You can only fit a weekend bag in there, at best. 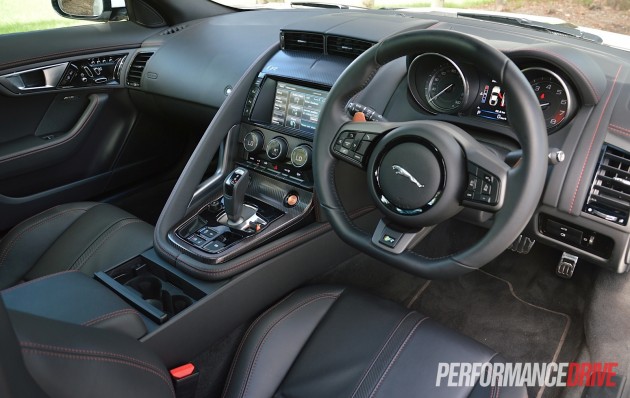 This engine is one of our favourites, and will probably be yours as well when you first hear it. Fire it up via the button start and it bursts and crackles into life, waking you out of any dreamy senses you might be experiencing. This example is fitted with the optional bi-modal exhaust, which has since become standard fitment. With it open it sends chills down your spine. It’s awesome.

The 5.0-litre supercharged V8 has been around for some time now, in various tunes. By today’s standards it is still doing quite well though in terms of output and efficiency. According to government regulated tests the average consumption is 11.1L/100km, however, you can expect more like 13L/100km in real-world conditions, depending on how excited you are by the incredible throttle response and acceleration.

Maximum torque is available from 2500rpm to 5500rpm, which means there is no hesitation whatsoever. From the moment you push the go-pedal the scenery becomes a blur instantaneously. We timed 0-100km/h in just 4.2 seconds, but we’re confident more grip off the line could see the time drop to 4.0 seconds. Once it’s off the line you’ll be blown away by the relentless force. It just keeps screaming, yelling toward to horizon, taking every gear change like the wheels are off the ground.

Fortunately, the handling is just as confident and empowering as the engine. There’s no body roll at all turning into corners. It just remains flat and very dedicated to the direction you point the steering wheel. Despite the solidity, it is surprisingly malleable in that you can throw the body around a bit and use some weight-shifting to pitch the car into the corner. From this point, it only takes a light prod of the accelerator to initiate a neat powerslide (when the stability control is off). It’ll drift all day long if you want it to.

Although drifting is not the fastest (or legal) way around a corner, it is a good measure of how well balanced a vehicle is. Particularly when returning back to centre. The F-Type is an utter genius at this, remaining completely composed at all times, with no sudden surprises of snap-oversteer or ‘tank-slapping’ to deal with. Part of this is down to the clever differential which basically locks together to provide a balanced left-right torque distribution.

Jaguar has done wonders with the steering as well. It’s very precise and fluid, with perfect communication coming back through the wheel. You always know where the tyres are on the road and how they are reacting to the conditions. This means it is both a pleasure to drive along a mountain road and easy to thread through traffic and into tight car parks.

When it comes time to settle down and trundle about town, the F-Type R rides a bit firm in terms of pure comfort, even in the ‘comfort’ driving mode. This tells us it has been set up to do the stuff mentioned above more than it has been engineered to soothe your soul. That’s not to say it can’t soothe your soul. It can. The deep baritone note of the V8 is like having Barry White sitting behind your shoulder, chanting softly. Vision is also good and the excellent eight-speed transmission in normal mode is smooth and relaxing. You could easily use this car as a daily driver, and you would thoroughly enjoy it. As we did. 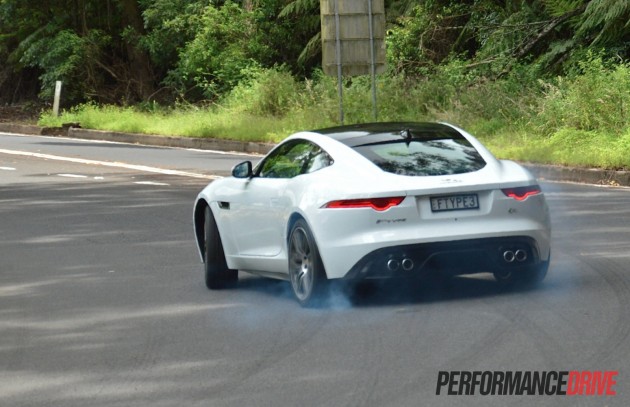 This is an incredible car and one of our all-time favourites simply because it stirs so many positive emotions. It looks stunning from every angle. It’s a bit different than the usual Porsche 911. It sounds fantastic, addictive, even. And to top it all off it is one of the best-handling and most well-sorted sports coupes on the market. As for 404kW? Well, you might as well get used to g-forces (and visiting the tyre shop), because this is about as much power you could ever possibly want.

Jaguar E-Type shoes were always going to be hard to fill. But with the F-Type, it has done more than commemorate a classic; it’s become a future classic worthy of its own accolade. We’ll take one in Stratus Grey, please.

PROS:
– Immense V8 power
– Sounds incredible
– Sublime handling and grip
– One of the best-looking cars on sale
– Quietens down and becomes fine cruiser when needed 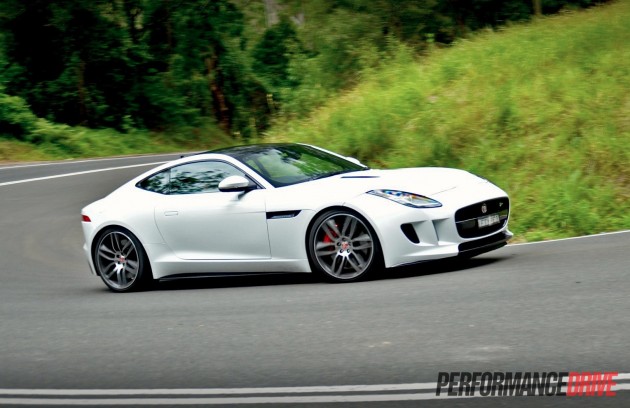