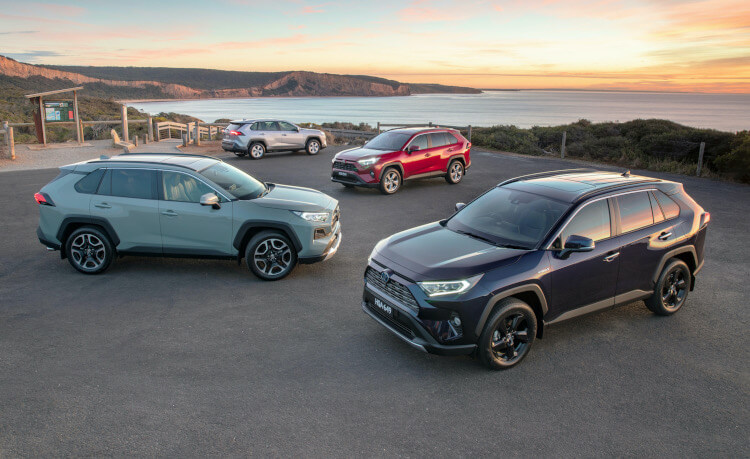 Toyota Australia says that a refreshed RAV4 for 2022 will receive a raft of updates when it heads into production later this year, with styling, technology and comfort topping the list of tweaked areas.

While we’re yet to see exactly what the styling updates will look like, Toyota says that details will be confirmed ahead of Australian deliveries starting in early in 2022. What we do know, though, is that all variants will gain a set of LED fog lights, as well as redesigned headlights for the hybrid versions to increase its nighttime vision (existing lineup shown above).

All petrol variants will benefit from an engine stop-start system, as well as a new alloy wheel design on “most” variants. Top Cruiser models will gain more comfort features, including a set of eight-way power adjustable front seats, ventilated driver and front passenger seats, digital rearview mirror, as well as illuminated door switches for the GXL, Cruiser and Edge variants.

The range-topping RAV4 Edge variant will receive some added safety tech, with the addition of parking support brake to the existing rear cross-traffic alert system. These upgrades won’t come without a cost, though, with Toyota adding that it will confirm the price adjustments closer to its introduction.

Toyota looks set to continue with its existing set of powertrain options, with the 127kW 2.0-litre petrol and CVT auto for the 2WD GX, GXL and Cruiser (manual transmission option looks to be deleted), as well as the 152kW 2.5-litre four-cylinder for the AWD Edge continuing on. The Edge maintains its separate eight-speed auto.

The hybrid versions will remain powered by a 2.5-litre petrol-electric hybrid producing 160kW in the front-wheel drive configuration, while the AWD version develops 163kW as before. These are both matched to a CVT automatic transmission. It looks like the overseas 225kW Prime plug-in hybrid variant is still no closer to Australia, unfortunately. Toyota Australia’s VP, Sean Hanley, said:

“The RAV4’s mix of style and practicality, and in particular, its hybrid powertrain, really resonates with buyers and these upgrades will add to that appeal. While these updates won’t arrive until early next year, Toyota is committed to keeping its customers aware of upcoming improvements and we encourage customers to speak with their preferred Toyota dealer about the upgrade on any orders placed.”

More details, including prices and specific trim level lineup, will be confirmed closer to launch, likely in the final months of this year. The RAV4 is currently the best-selling SUV outright on the new vehicle market in Australia.