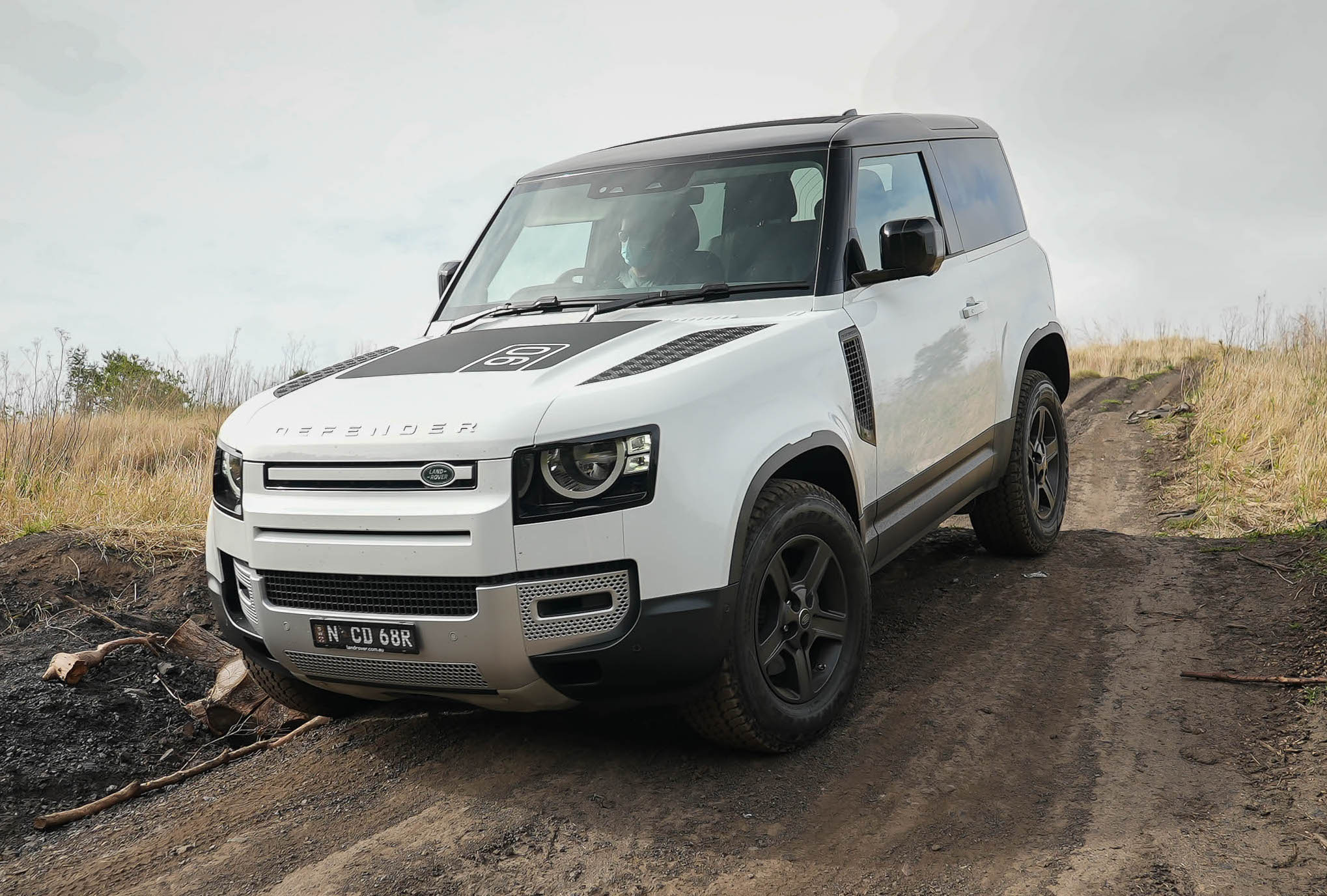 Far from a pretend off-roader, the new 2022 Land Rover Defender 90 promises to be one of the most capable SUVs on the market today. But is the entry diesel D200 enough, or are you better off further up the ranks? 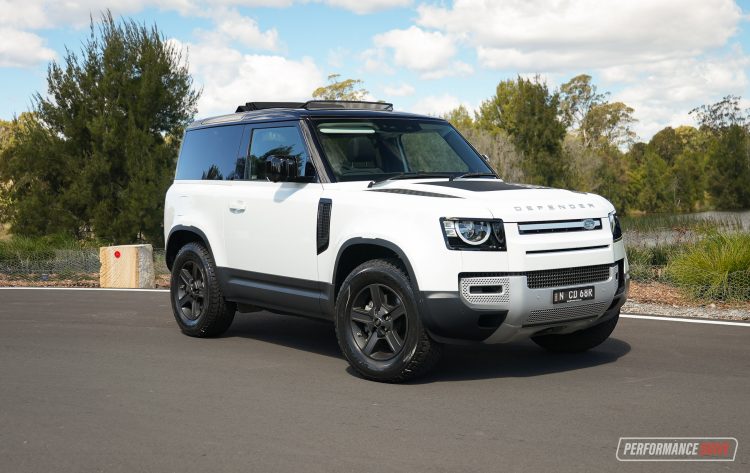 We ask this because Land Rover does offer a huge variety of power options for the new model. You can start with the 221kW 2.0-litre turbo-petrol four-cylinder P300, or move up to the 3.0-litre turbo-petrol inline-six with up to 294kW (called the P400), or go nuts with the bonkers 5.0-litre supercharged V8 that belts out 386kW.

The entry level diesel, the D200, is still way more powerful and more torquey than the predecessor’s diesel options. It generates 147kW (200PS) and 500Nm from its ‘de-tuned’ 3.0-litre turbo inline-six. Land Rover Australia did offer the D300 (220kW/650Nm) engine for the 90, but that has since been deleted. Instead, you can only step up to the D250 in the diesel fleet, which boosts output to 183kW and 570Nm. 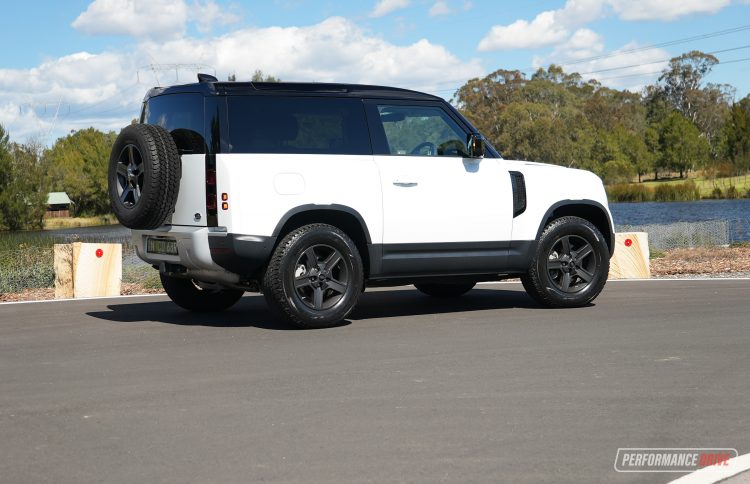 In early generations that ’90’ in the name referred to the wheelbase (in inches). But these days the figure is just a nod to those classic models. It is still a shorter wheelbase though, with two doors compared with the regular four-door model. Wheelbases measure in at 2587mm and 3022mm, respectively.

This is such a cool car in our opinion, especially in 90 form. It’s cool because it is not just another common-mould SUV. And aside from the modern, sophisticated yet rugged, concept-car-like design, the new Defender is also unbelievably practical inside. There are clever storage areas and innovative fixtures that really separate it from anything else on the market. 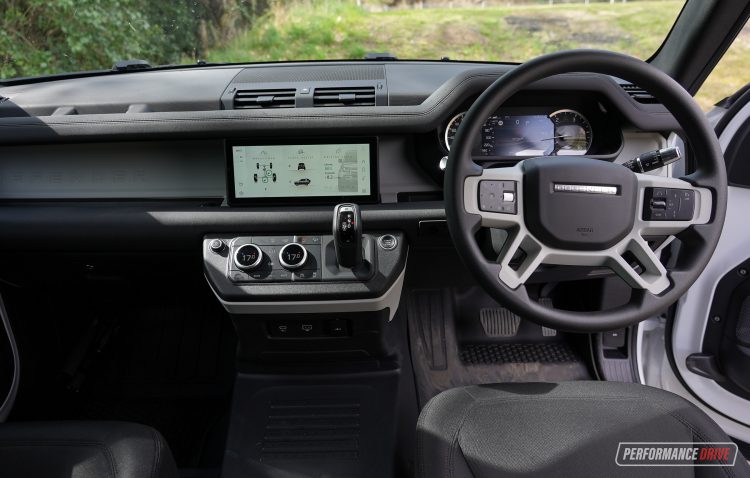 Inside are elements which are back-to-basics, such as the lack of a proper centre console and floor carpets – although optional – yet there’s also a big touch-screen with full surround-view cameras. Passenger space is good in the front, with heaps of headroom and space to move about, and there are loads of little and big storage areas including a full-length, rubber-padded dash shelf.

It’s refreshing to see a cloth trim for a change, as shown on this test car. Going for this option can help during off-roading too, as cloth tends to grip you in a bit better. And then in the back you’ll find three extra seats. They aren’t just squeezed in there, either. You get decent headroom and legroom, and even cup holders on the floor. The main concern is getting into them, as it is a bit tight through the front door. But that’s what a two-door is all about. 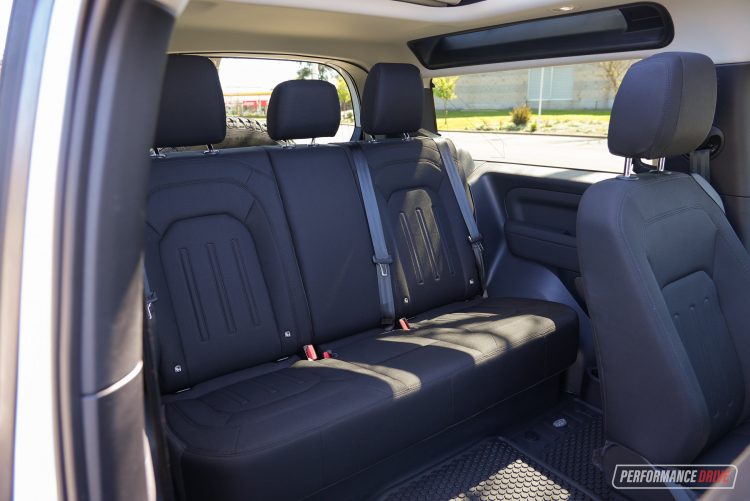 Boot space measures in at 397 litres, which is about the same as a decent small hatch. The depth isn’t great, but the height is where you’ll see most of the volume. A 12-volt socket in the wall, durable plastic floor, and a storage pocket in the tailgate add further practicality.

This vehicle also shows off the fabric peel-back roof option, and the contrast bonnet decals, roof, and pillars. It also showcases the very handy Activity Key ($910 option) which allows you to run around, go for a swim or bike ride and not have to carry the regular key with you. 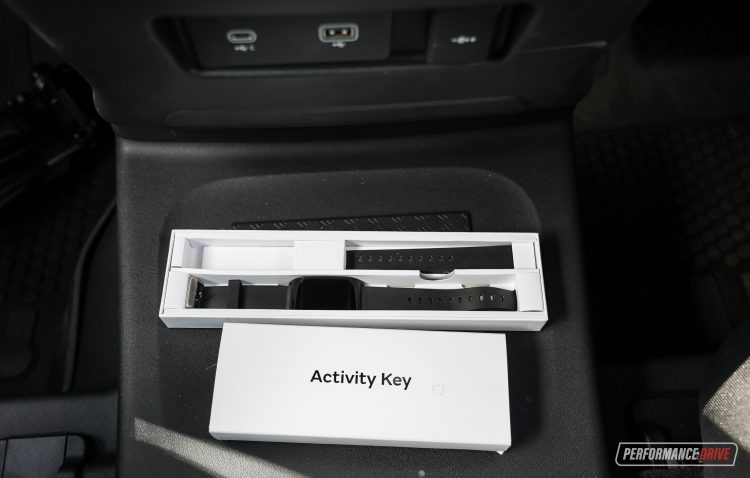 As standard the D200 comes with 18-inch steel wheels, which are perfect for serious off-roaders, but you can option for alloys too, like on this example. Land Rover also offers a range of larger items if you want to go for more of an urban look. 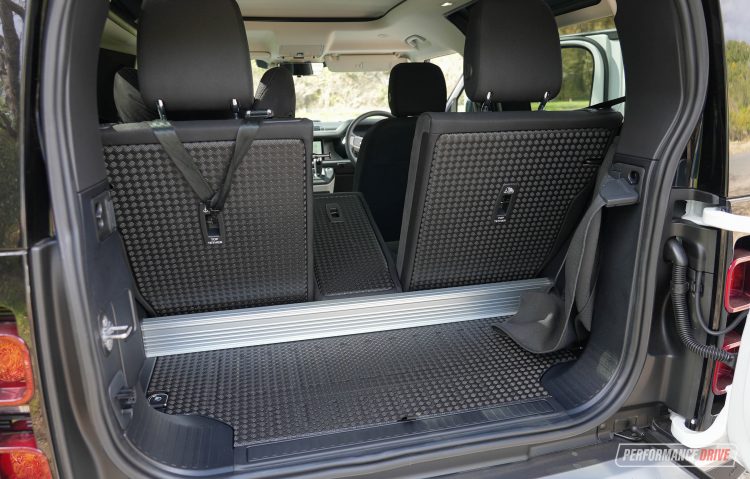 Despite its seemingly petite proportions and character, this is a heavy-duty SUV at its core. As such, the braked towing capacity is at the maximum 3500kg. The gross combination mass is also 6470kg. So if you take away the kerb weight of 2235kg and a 3500kg trailer, that leaves you with a very useable 735kg for passengers and luggage.

This is not what’s commonly left over in the popular dual-cab 4×4 utes. Using the best-seller as an example, the Toyota HiLux, in SR5 auto form it offers a GCM of 5850kg. Minus the 2055kg kerb weight and 3500kg trailer and you’re only left with 295kg for passengers and luggage. 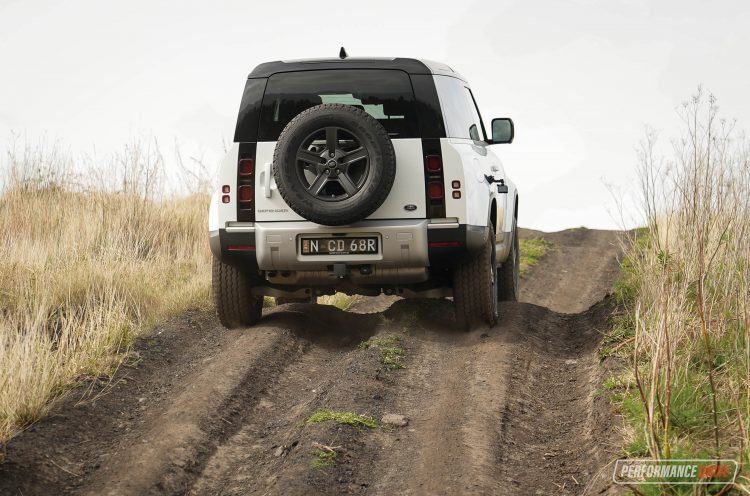 Now, ordinarily, the base diesel option for any vehicle is automatically snubbed as the poor-mans’ choice and not at all desirable. But we’re not sure if that’s the case here. The D200 comprises of the same 3.0-litre turbo-diesel inline-six as the D250 and short-lived D300 (for the 90, still available in 110 body size). And it’s infused with mild-hybrid tech, including an electronic supercharger/turbocharger.

All 500Nm of torque is available from 1250rpm. This means you get plenty of instant shove off the mark. This’ll come in handy when you’re out in the boggy stuff, snatching your unlucky friends out of too-tricky situations. It also means highway speeds can be reached in an effortless manner. It steams off the line and provides a nice constant charge. 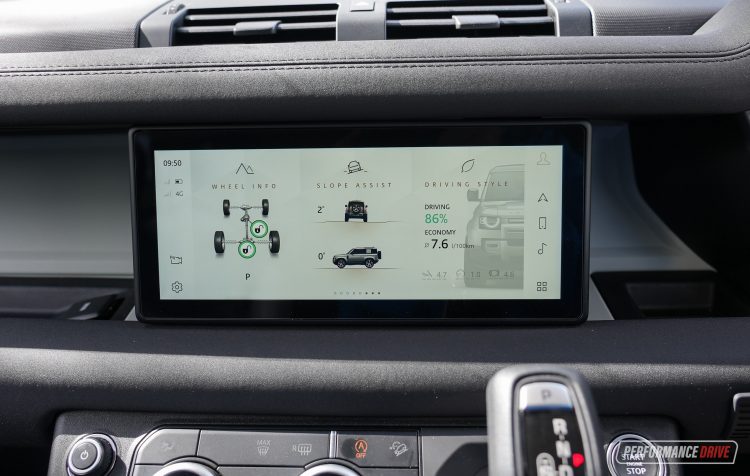 If you ask more from it, the top-end power isn’t as useful. It’s one of those vehicles that performs quite impressively with just half-throttle or less. But when you fully depress the pedal it doesn’t actually go much quicker. However, our Vbox reported some respectable numbers. The standard 0-100km/h sprint was achieved in 9.07 seconds. That’s a thick lick quicker than Land Rover’s claim of 9.8 seconds.

To put that into perspective, we usually see this sort of time from small and medium SUVs, some with more power and less weight on board. So that’s commendable of the heavy-duty Defender to score such a time. And in base diesel spec. What we like most about this engine though is the sheer smoothness, and the hush hum it emits. 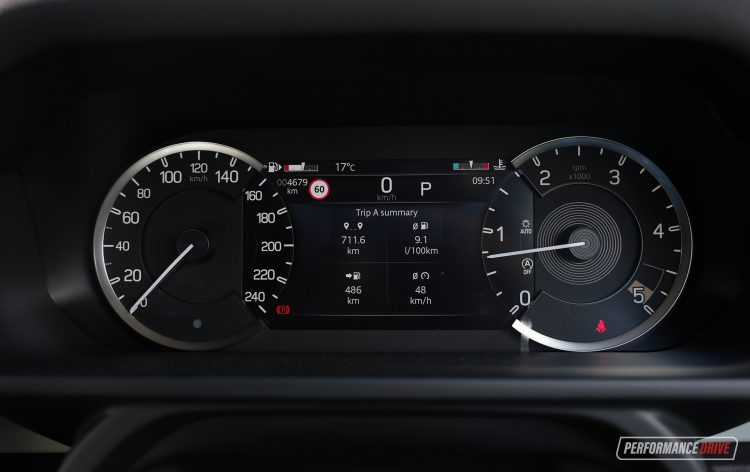 The 89-litre fuel tank and official average consumption rate of 7.9L/100km translates to a theoretical average range of 1127km, making it perfect for big road trips around Australia. During our test, which consisted of the usual performance runs, a decent chunk of highway driving, and some spirited stints in the mountains, the trip computer reported a real-world average of 9.1L/100km (over a distance of around 710km).

Of course, the main attraction to any Defender is the off-road capability. With such short front and rear overhangs, and a short wheelbase, it is just so easy to clamber over mounds and march up muddy banks in this little machine. About the only limitation is traction. It feels like it can go anywhere. This example rides on moderately chunky all-terrain tyres, measuring a tall 255/70. So traction is pretty darn good for a standard production car anyway. 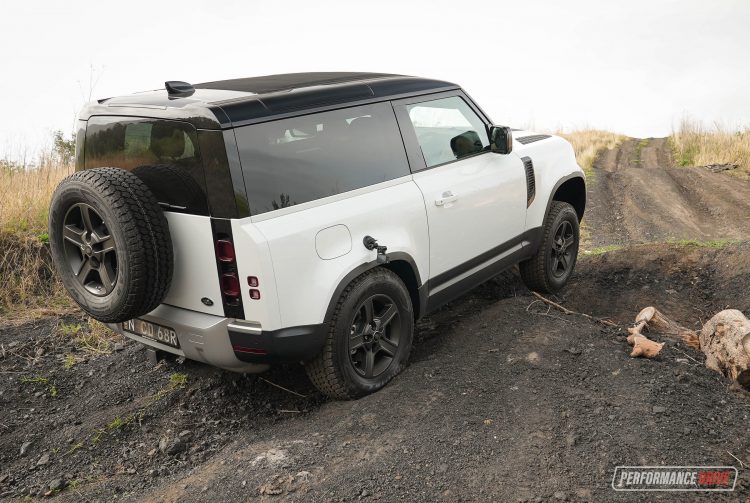 Most models do come with adjustable air suspension as standard, but this example showcases the coil spring option. This is perhaps more heavy-duty. Although, ground clearance is rated at 225mm, while the air suspension can take that to 291mm. For us, the main benefit of the air setup is a supreme ride quality. Whereas, with the coil springs, you get lots of compression range and extension, and ample give over bumpy surfaces, but not quite the suppleness of the air option.

If you’re planning a huge trip, around Australia for instance, we’d recommend the coil springs as they are likely to be more durable. In fact, it’s not very common at all for steel springs to ever break or malfunction, while air suspension setups always eventually require some level of maintenance. 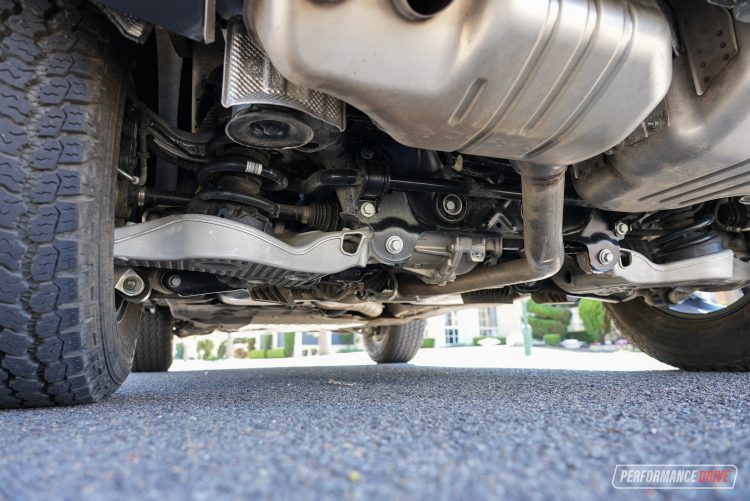 The new Defender 90 is such a joy to drive and be in. It’s cool, inviting, and very interesting, all while offering a high level of off-road capability and an impressively practical interior. We love the design, inside and out, and we love the variety available for not just engines but also trimming and accessory options.

As for the D200 engine? Yes, it is more than adequate, particularly for this style of vehicle. For most buyers it will suffice. For those that want a bit more zing, especially in the top end, we reckon check out the D250 or the more serious P400.

PROS:
– Such a cool design
– Outstanding practicality inside
– Short wheelbase creates nimble, entertaining drive experience
– Genuine off road performance
– 500Nm D200 inline-six is smooth and quite, and will do for most
– 3500kg braked towing, impressive 6470kg GCM

CONS:
– Coil spring option limits ground clearance to 225mm; adjustable air suspension up to 291mm
– Some options are expensive but shouldn’t be