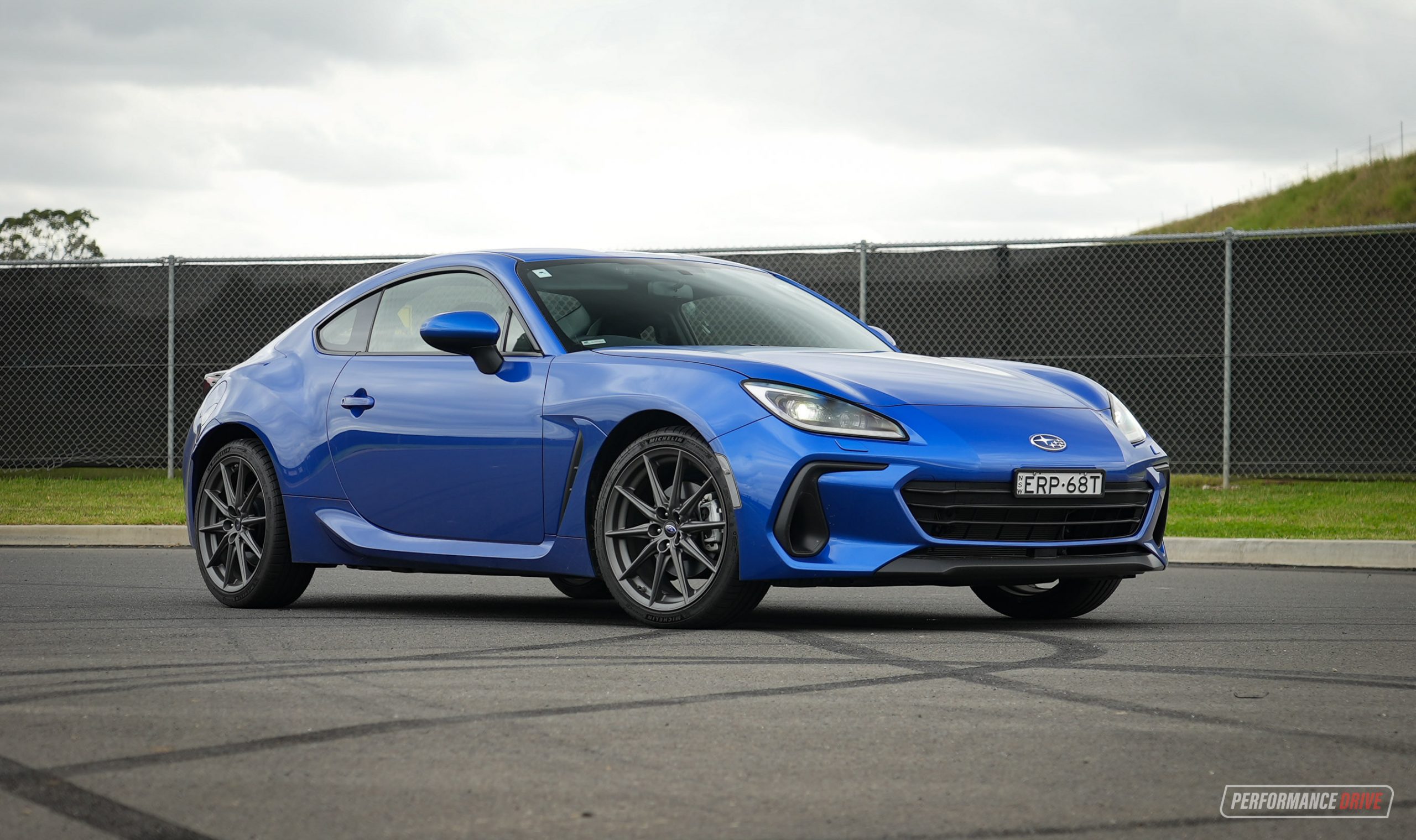 It might look similar to the original model but this is the second-gen, 2022 Subaru BRZ. Think of it as a refreshed take on the popular sports car, with more power, more technology, and an evolved set of driving characteristics that make it fun and more versatile. 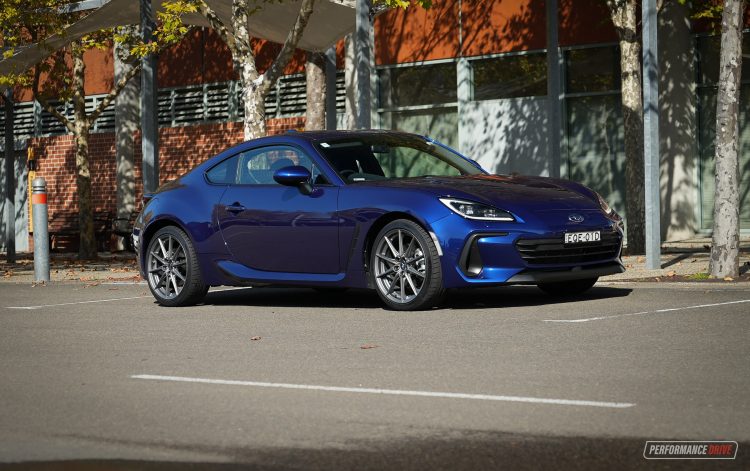 Ok so firstly, there is no turbocharged engine under the bonnet. We’ll get that out of the way – we had a number of fans come up to us during this test to ask if it was now turbocharged. Don’t fret, though, as the engine might as well be turbocharged compared with the old 2.0L unit. This now features a 2.4-litre engine, developing 174kW and 250Nm (up from 152kW and 212Nm).

You can still get it with a manual transmission or a revised six-speed auto. Rear-wheel drive and a limited-slip differential continue to ensure lots of smile-inducing enjoyment in the bends. Two variants are on sale in Australia – BRZ and BRZ S – and there are a number of tasty STI parts and accessories to choose from. Here we’re sampling the S in manual and auto forms.

We think it is simply unacceptable for Subaru to command $3800 extra for the auto option, especially as it is just a conventional torque convertor six-speed auto and not an expensive dual-clutch or even a complex CVT. That aside, it is good to see starting prices remain relatively affordable for this day and age. 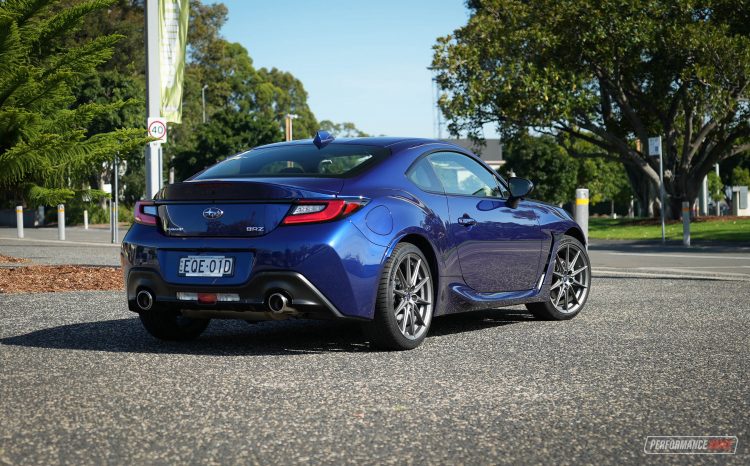 The interior has been updated in a familiar kind of way. Most of the controls are in similar areas to before, which is great as it is a very ergonomic and easy-to-digest layout. We like the new digital knobs for the climate control, and the changeable instrument cluster display which shows things such as live tyre pressures, the engine’s power and torque curves, and a g-force graph.

There’s a new touch-screen on the dash as well, running improved apps and graphics, and both the standard and S models come with a six-speaker sound system along with digital radio and sat-nav. Going for the S model adds leather and Ultrasuede seats, along with seat heating in the front. Chunky sports seats continue, offering excellent support in the bends, and the low-set, hunkered-down driving position remains. 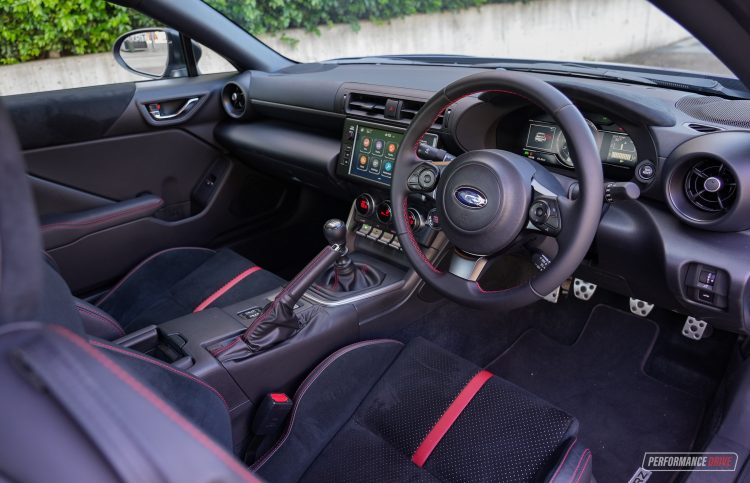 As before, the rear seat is pretty much useless. Actually, that’s a lie. You can use the area to store additional items, such as a helmet or gym bag. For people though, forget it. Even kids will struggle to find comfort in these, especially if the front passengers are slightly above average in height.

Boot space is minimal and there’s a full-size spare wheel taking up a lot of the room, sitting awkwardly in the middle. But at least the wheel is upside-down so you can fill it with your shopping.

The auto version we’re testing is coated in the popular WR Blue, while the manual showcases the subtle Sapphire Blue option. There are no visual differences for the auto and manual, except obviously inside you’ll find a (manual-looking) gear shifter and paddle shifters behind the steering wheel. 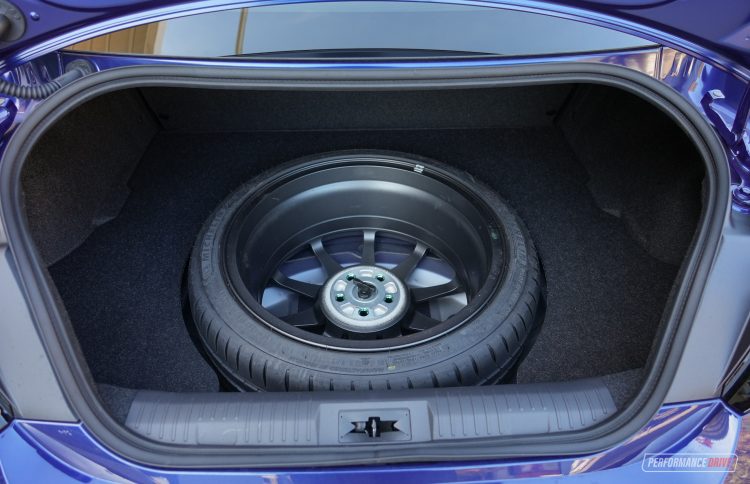 A majority of the main changes are found under the skin. The rear track is 10mm wider for better stability, and the suspension is overhauled, especially at the front. Body rigidity is also up by 50 per cent to increase handling response. Fortunately, its lightweight nature has been retained from the old model, with the manual version offering a tare weight of just 1249kg. That’s seriously light for a modern vehicle. And it feels it from behind the wheel.

Another big change is a switch to Michelin Pilot Sport 4 tyres. They measure the same 215/40 as before, but they offer heaps more grip over the previous Michelin Primacy tyres. Although it now hangs on for longer, it can drift in a more controlled manner as well. You need to be pushing really hard to get unstuck, and thanks to the raw steering feel you always know how the tyres are coping.

Hiding behind the wheels are a set of fairly conventional brakes. Being such a lightweight vehicle means it doesn’t need massive eye-popping calipers or cross-drilled discs. These do the job just fine, even after repeated abuse. And we mean repeated, and repeated and repeated torture. They keep their cool and continue to offer excellent stopping performance. We clocked 100-0km/h in just 36 metres. 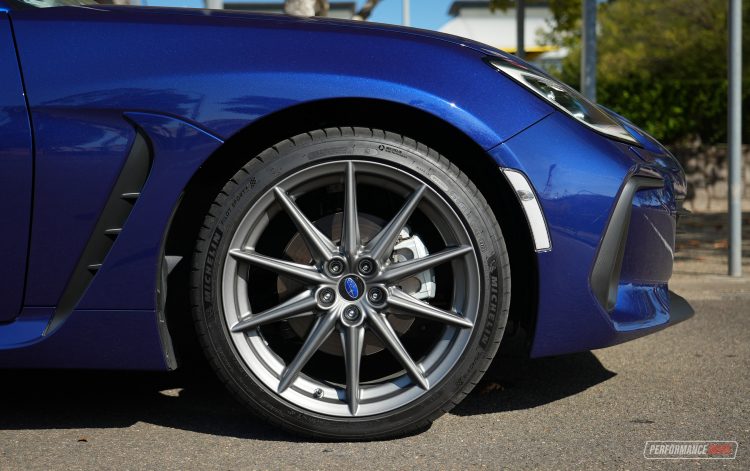 Perhaps the most welcome change is the new 2.4-litre flat-four engine. On paper it clearly offers more power and torque. Out on the road it feels like a completely different unit. It sounds a bit beefier, pulls harder and from lower revs, but still enjoys being pushed hard.

During the initial media launch drive we predicted a 0-100km/h time of around 7.0 seconds, or less with a good launch. Well, we were wrong. Using our Vbox Sport and private road we saw the sprint come up in an impressive 6.60 seconds in the manual. And keep in mind this is the S with the heavy heated seats and leather trim. In the base model you might see 6.5s or less. 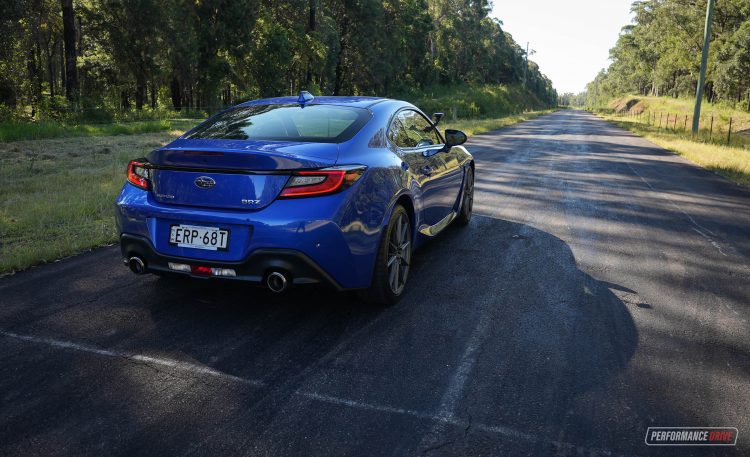 Either way, that’s a quality time we think. Most hot hatches can achieve a similar result, and they feature a turbocharged engine to help surge them along. Of course 0-100 performance is not everything. In-gear acceleration is what you rely on more during sporty driving or on a track. And that’s where this new 2.4 engine comes into its own.

With extra torque, and available lower down (3700rpm, down from 6400-6800rpm before), you can now lean on the throttle in third gear and it will eagerly pull you through. Whereas before the 2.0L engine required you to change down to second gear for an exciting corner exit. This new engine is still very happy to rev right out to 7000rpm too, so you can enjoy all of the classic sports car characteristics. 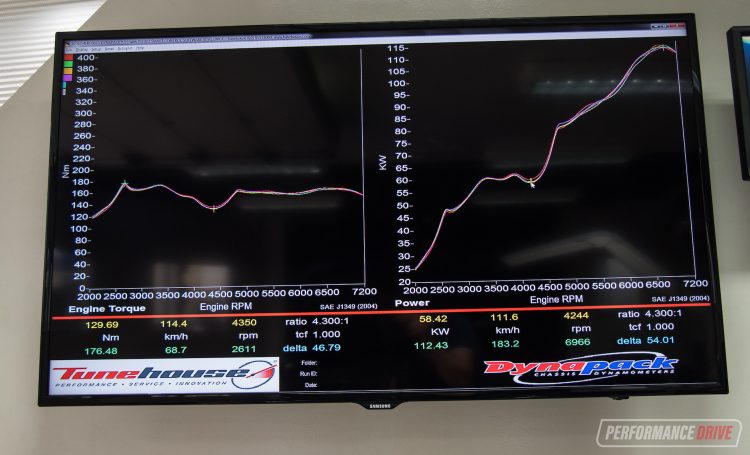 Another area that’s vastly improved is the power curve. As we found out during a dyno test of the 2019 BRZ, Subaru had engineered a flat spot into the power delivery pattern. At the time the dyno owner said this was a common modification he performed for customers, removing this flat spot. Fortunately, it has been removed for the new engine as well. Well, not removed but not grafted into the mapping in the first place.

There is a little display mode that shows real-time power and torque delivery, and the curve looks very progressive and linear. There appears to be a tiny dip at around the same 4000rpm rev point, but it’s so small you can’t feel it when driving. This means the engine revs smoothly up to its redline instead of having a moment of contemplation. 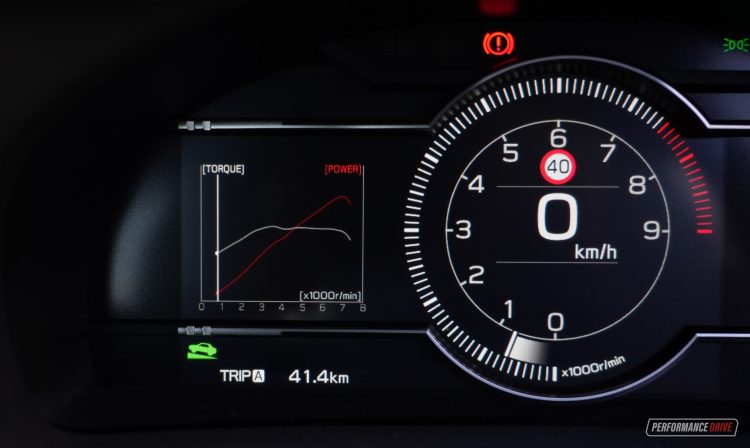 Fuel consumption has jumped from 8.4L/100km to 9.5L/100km for the manual (8.8L for the auto). We can’t confirm if the latest figure is under the newer WLTP testing protocol, but even so anything in the 9s these days is very high, especially for a little lightweight vehicle like this. 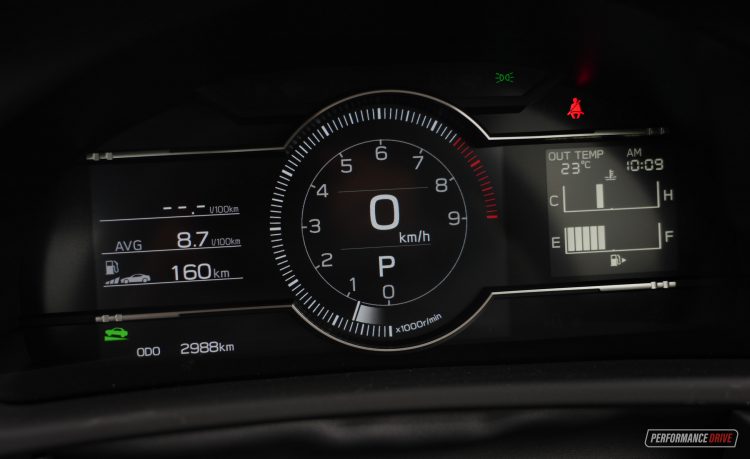 This is where a turbocharger would really come in handy. Yes, the notion of a ‘turbo’ is exciting but in reality these mechanical devices are inherently efficient, using exhaust gas to create energy that would otherwise be wasted. It just so happens that turbochargers are great for adding power and particularly torque, helping engines to breathe. Thus, fuel consumption is usually lower with a turbo.

As expected, our ‘power efficiency’ calculation doesn’t return a good result for the BRZ. The manual turns out at 18.31kW:1L/100km and 19.77kW:L/100km for the auto. Vehicles over 25 or 30 offer exceptional performance for their fuel usage. This is quite below par. 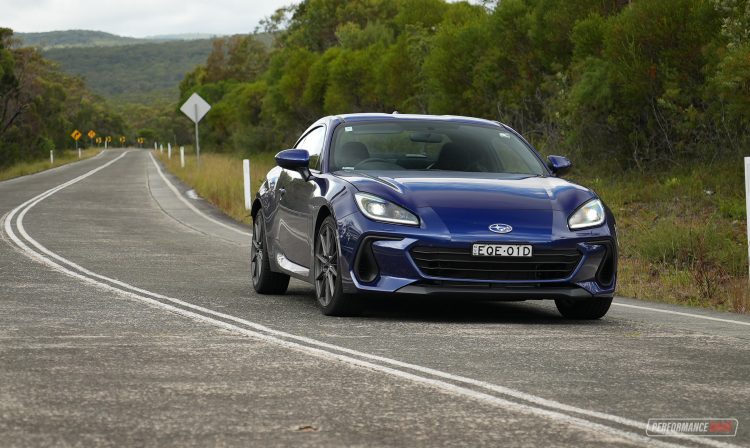 Should you go for the auto then since it is more economical? Look, the idea of a manual always makes us happy. But in reality, the auto is more practical during the daily grind. Automatics are easily the most popular choice for buyers in general, so we don’t blame anyone for going with the auto in this case.

It’s a decent unit that’s revised from before, offering smooth and responsive changes. With only six ratios it can seem a bit long-legged, making us constantly wonder how good an eight-speed would go. But hey, at least Subaru has not stuffed one of its displeasing CVTs into this.

It’s quicker, more refined, nicer to look at, and packs more technology on board, yet the desirable driving characteristics from before have carried over, in a more complete form. There really isn’t much to not like about it. Yes the boot and back seats are small, but it is a small sports coupe after all. There is no turbo option either. But in reality, this 2.4L will more than suffice for most buyers.

We guess the only real downside is you can’t buy one. Actually, you can, but you need to sit in line and wait for the next production batch to become available. Because for now, Australian allocation is all sold out.

PROS:
– Superb handling characteristics cater for amateurs and experts
– Michelin Pilot Sport 4 tyres are a world of difference over the previous setup
– New 2.4L engine no longer has flat-spot in power delivery, more power and torque too
– Sounds better than before, even with fake sound enhancement in the cabin
– Relatively affordable in entry form
– Practical cabin layout and button placement

CONS:
– Fake engine sounds can’t be switched off (without serious modifications)
– Small rear seat, almost useless
– Small boot with crude spare tyre positioning
– 9.5L/100km is far too high for the performance/power in return
– Production is limited at the moment, hard to get your hands on one