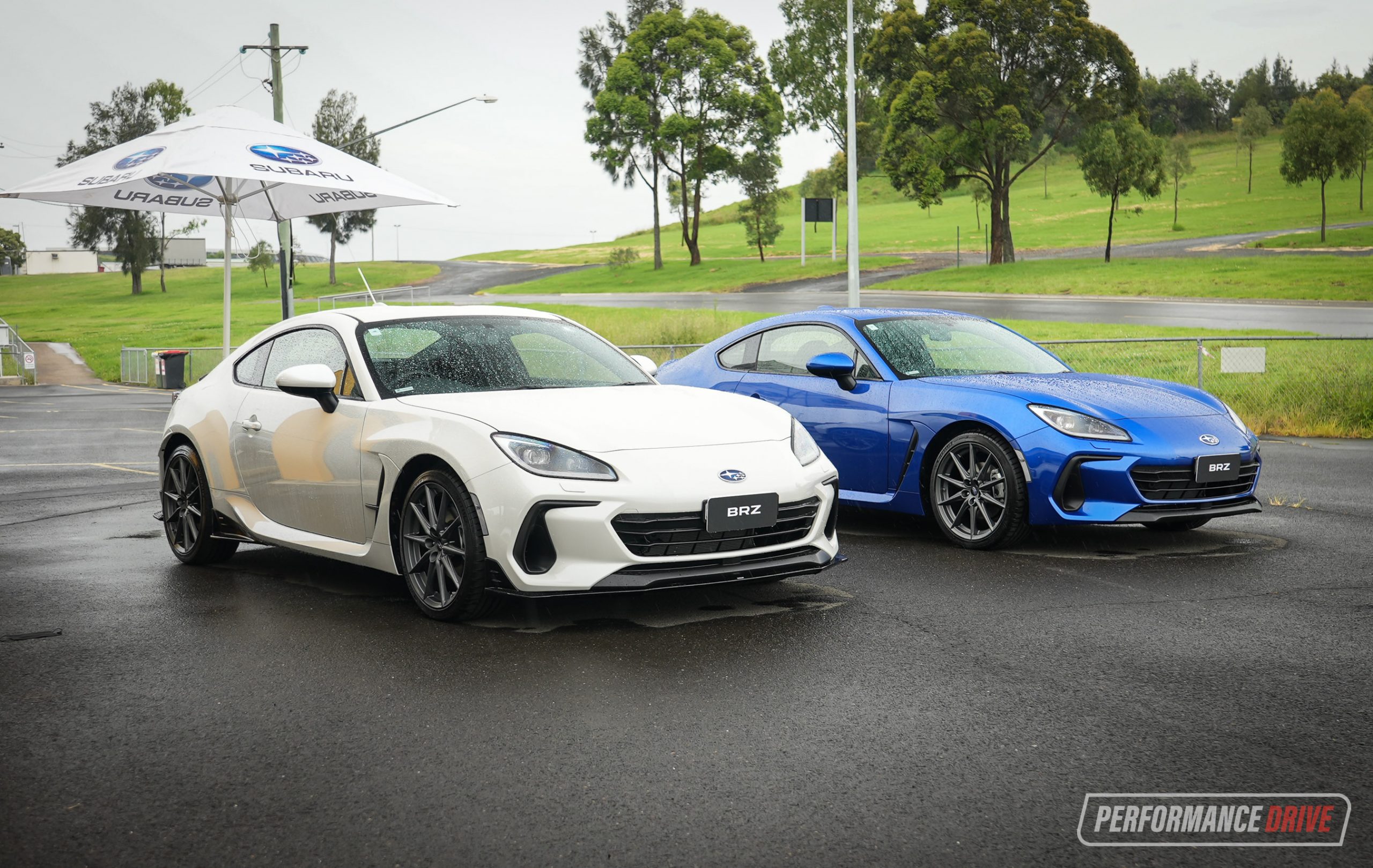 We always loved the original Subaru BRZ, and now it’s time to welcome the all-new 2022 model. This is the second-generation of the highly popular, and hugely fun, rear-wheel drive sports car. It’s still a cooperation with Toyota and its 86, but in Australia the BRZ arrives first. Is it as good as the original? Let’s take a look. 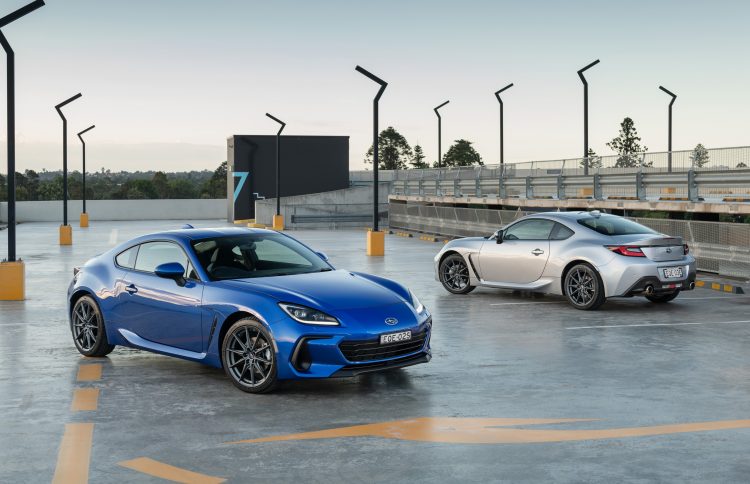 We’re here at Sydney Motorsport Park as part of the official media launch event for a first drive. Media were given the opportunity to sample the new model on the short ‘Amaroo’ section of the circuit, under speed/guidance of a lead car instructor, as well as test out its fun-loving character on a skid pan, and take one for a short drive out on the public roads surrounding the circuit.

The first supply allocation for Australia, of around 500 units, is already sold out. Even if buyers can score a spot in the second allocation, deliveries are not expected to arrive until later in the second quarter. Beyond that, buyers could be waiting until much later in the year to get their hands on one.

There are two main variants for the new model, including the Coupe and Coupe S. Both are available with either a six-speed manual or heavily-revised six-speed auto. Prices start from the following (excluding on-road costs): 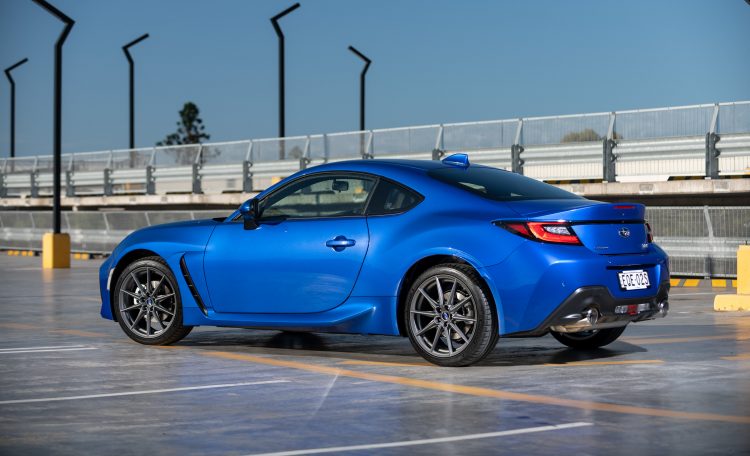 On first impressions, it kind of looks similar to the old model. But when you look a bit closer you’ll see it takes on a smoother, more modern design theme. The panel edges are rounder, the contours are more curvaceous, the headlights are bulbous, and you get a fashionable full-width taillight treatment at the back.

Although it is based on the same platform as the old model, it has been drastically revised. It’s stiffer, for starters. Subaru says that compared with the old model the front lateral flexing rigidity has been increased by almost 60 per cent, while body rigidity has jumped up by around 50 per cent. Those are impressive numbers, considering the outgoing model was already at a very high standard.

There’s also new front suspension characteristics to match the stiffer platform, with aluminium used for the front wheel hubs to reduce weight by 3kg, and the stabiliser bar is now hollow to shave 400 grams. At the back, the sub-frame rigidity is increased and the stabiliser bar is now mounted directly to the chassis rather than to the sub-frame to improve driving stability and handling. Some new damper settings have also been implemented. 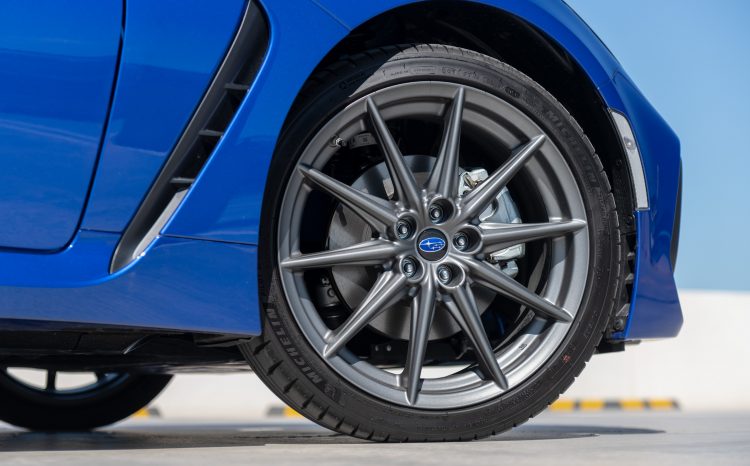 Other fundamental changes include a wider rear track, by 10mm, and the roof is now made from aluminium to save weight and to keep the centre of gravity low as possible (it’s 4mm lower than before). Speaking of weight, the new model is about 3-4kg heavier compared with the equivalent previous base model, Subaru says, and about 6-8kg heavier for the top model.

You still get the same 215-wide tyres as before, but now the new-look wheels are wrapped in grippier Michelin Pilot Sport 4 tyres instead of the more conventional Michelin Primacy tyres. The old tyres are primarily designed for safety, efficiency, and longevity, according the Michelin, as opposed to a sheer performance focus like the Pilot Sport range. 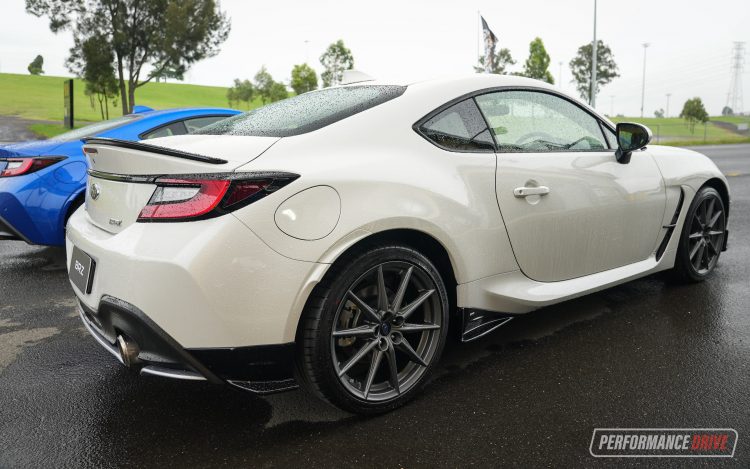 During the event we were given a sneak peak at some of the optional STI parts that will be available to customers. A white example was on display, showing off the potential, wearing a rather sleek and sinister black aero kit with skirts all around. A neat black spoiler compliments the look. Subaru will have a range of other options too, including more serious components for those looking to hit the track on a regular basis.

Inside, it’s a big leap forward over the previous model. The interior feels much more premium than before, with increased use of soft-touch materials making it feel less echoey and hollow. Although, it is still a very low and hunkered-down sports car, so getting in and out does require some leg muscle.

Some of the switchgear positioning is obviously inspired by the old model, which is great for existing owners. But there’s a nicer 8.0-inch touch-screen on the dash packed with digital radio and sat-nav (on both variants), a fully digital gauge cluster, and heated seats on the S variant. 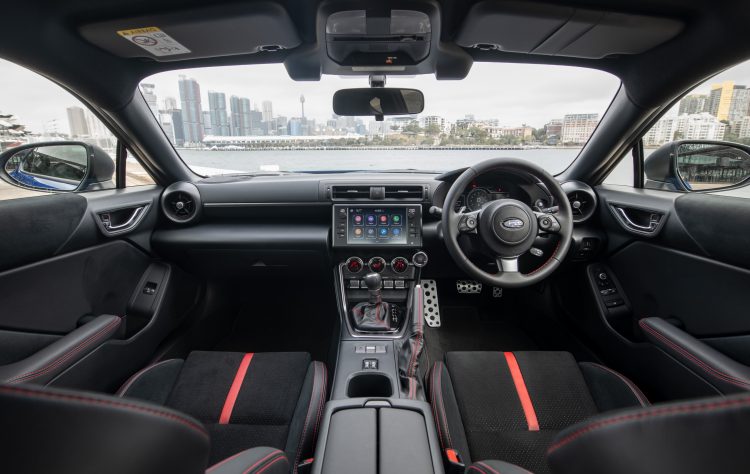 Speaking of which, the seats are lovely, offering plenty of support and comfort. As before, the rear seat is very tight and probably best left for the kids only. In saying that, adults could jump in there for a last-minute drop-off/pickup to/from the pub. So long as the front passengers are prepared to slide forward, a lot.

Boot space remains small as well, especially with the full-size spare wheel sitting right in the middle. The specs say you have 201 litres to play with. You can fold down the rear seat though, and that does open up a big cavity. We didn’t test it but we suppose you could slide in a surfboard or something like that. Nonetheless, it’s fine if this is going to be a second car, or perhaps even your first car. 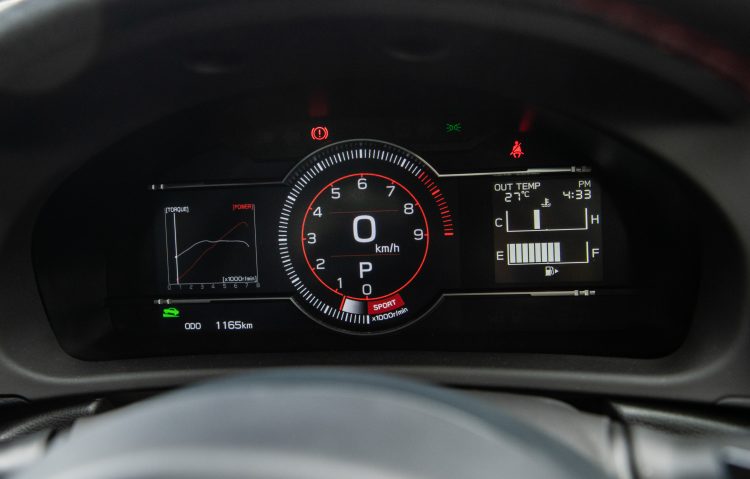 As for the engine, it is now a 2.4-litre flat-four, up from 2.0 litres. There’s still no turbo, despite plenty of cries for one from fans, but with more capacity you do get noticeably more low-end torque. Peak power is reached at 7000rpm (same as before), which is great, and you receive 174kW instead of 152kW. Peak torque is boosted from 212Nm to 250Nm, and it’s available from just 3700rpm instead of between 6400-6800rpm.

Even just looking at the specs on paper it is easy to see this engine is much more versatile, and thus more practical for day-to-day use. You no longer have to wring its neck to get the most out of it (not that it was much anyway). So now you can keep up with traffic without looking like a hoon. We had a drive of the automatic model on the road. At first my mind was thinking, ‘yuck, I don’t want to drive that, but I suppose I better for educational purposes.’

I’m glad I did as the updated auto is really nice to drive on the road. There’s even a little burble during upshifts at lower revs – or at least I thought I heard one. However, its ability to get you up to speed is vastly improved over the old model. With that extra torque you merely lean on the throttle and you’re soon up to speed. No harsh revving or looking like a fool. In that sense, it has become somewhat of a grand tourer. Or it can be more of one than before. 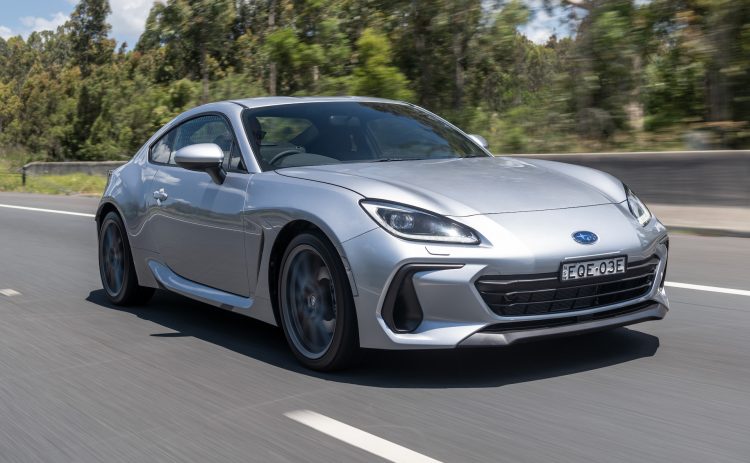 Out on a very wet and very slippery track, Subaru offered us drives of the old model back-to-back with the new model, just so we could see the difference. We could see, clear as day, the new model, with the grippier tyres, was much more controllable. Drifting and tail-out fun is still of course very possible, but now there’s a level of grip that provides more control while sliding. Whereas the old model, you kind of just prod the throttle and it starts sailing. It’s then up to you to decide when to re-apply more throttle. That’s on a wet track anyway.

Unfortunately, due to the wet weather and time constraints we didn’t get a chance to do any 0-100 testing for you. But we will put together a full test and our usual video as soon as we can. On first impressions though it definitely feels quicker. We last timed a BRZ across the sprint in 7.77 seconds, whereas now this new model feels like it could cover it in around 7.0 seconds flat, or even less with a good launch.

Overall, it is much like the old model in almost every way. And we mean that as a big positive aspect. Except, this is better in every way. Not necessarily different, but improved, higher quality, and more rounded.

The interior is more refined, the power delivery is now gradual rather than peaky, helping to improve commuting comfort, and the other big improvement is a heap of modern safety tech which was simply non-existent on the old model. We’ll go into more detail about the driver assist systems when we take one for a full road test soon. Above all though the BRZ remains a thoroughly enjoyable and driver-friendly sports car.