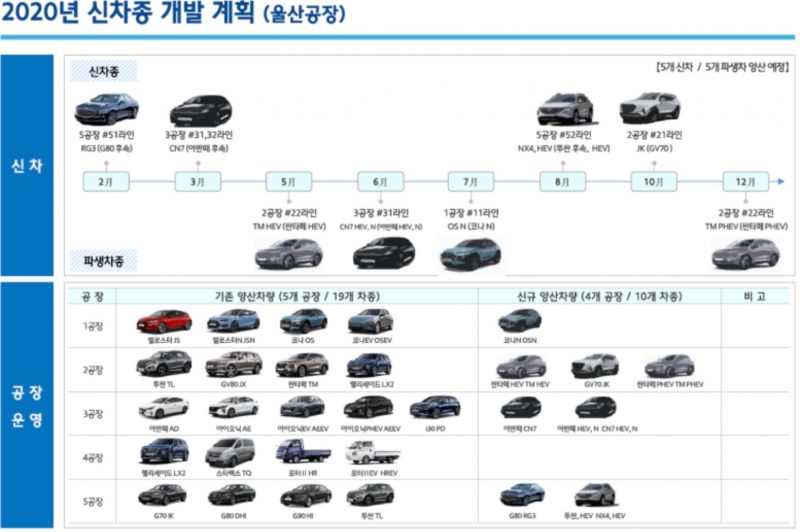 Some potential timing details may have been revealed thanks to this interesting production schedule for Hyundai’s future models. It provides some insight on the next-gen Tucson and Genesis GV70, as well as mentions of the new i30 sedan (Elantra) in hybrid and N forms, as well as the Kona N performance SUV. 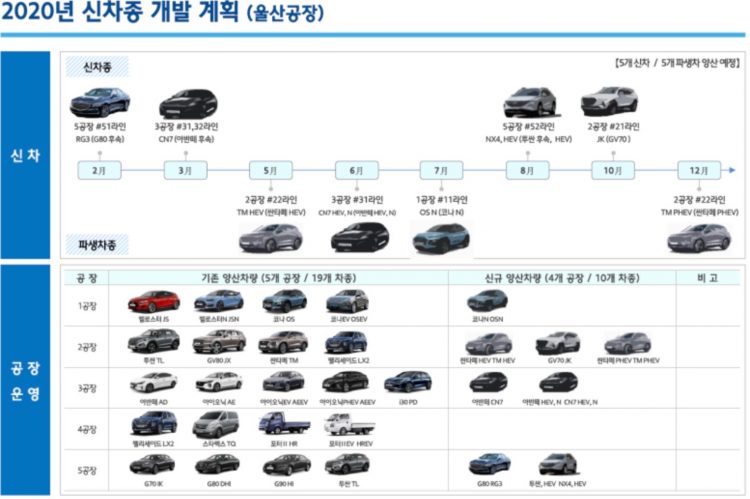 The image comes from an Autospy post and claims that it is the 2020 production schedule for Hyundai’s Ulsan facility in South Korea. It’s a shame the image isn’t large because, if you look closely, some of the models which are yet to debut appear to be shown in full view, albeit very small.

Key highlights include the new Santa Fe hybrid (codenamed TM), which looks like it will commence production in May, with a plug-in version hitting production in December. A hybrid version of the new i30 sedan and what looks to be an N model will roll through in June, with the Kona N set to go into production in July. Strangely, there doesn’t seem to be any mention of the i20 N.

Also very interesting is the all-new 2021 Tuscon (codenamed NX4), which will include a hybrid option for the first time as part of Hyundai’s future mobility plans, going into production in August. Keeping in mind this is when production will purportedly start. An online debut could take place within a month, either side of this.

You can just make out the design in the tiny image, which, as expected, does seem to carry over a similar wide front grille theme that we first saw with the NEXO. The model will also take inspiration from the Vision T concept that was revealed late last year. Prototype Tucsons have been spotted doing the rounds at Nurburgring over the last few months (below). 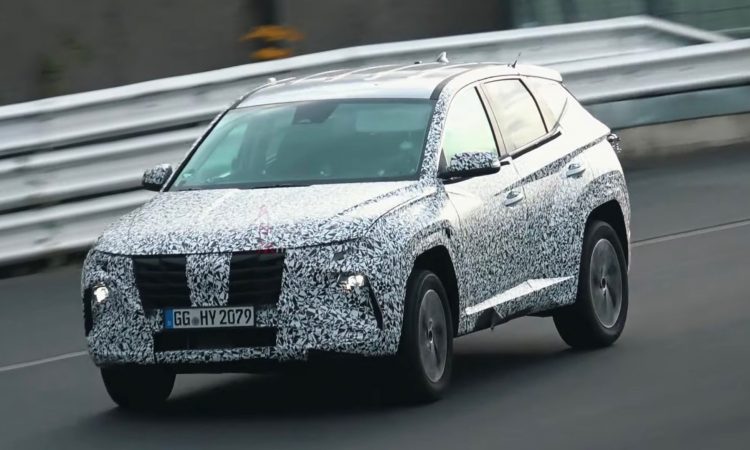 In October it looks like the Genesis GV70 will go into production. So far we’ve only seen prototype versions doing the rounds at the Nurburgring, with lots of camouflage and makeshift panels hiding the design. This will be the first mid-size SUV from Genesis, taking on the likes of the Audi Q5, BMW X3, Jaguar F-PACE, and Mercedes GLC.

We’re not sure how up-to-date this schedule is. In fact, we don’t even know if it is official. However, there could be some delays with this timeline due to the coronavirus pandemic. Even so, Hyundai may decide to go ahead with any online debuts that would have otherwise coincided with these production plans.