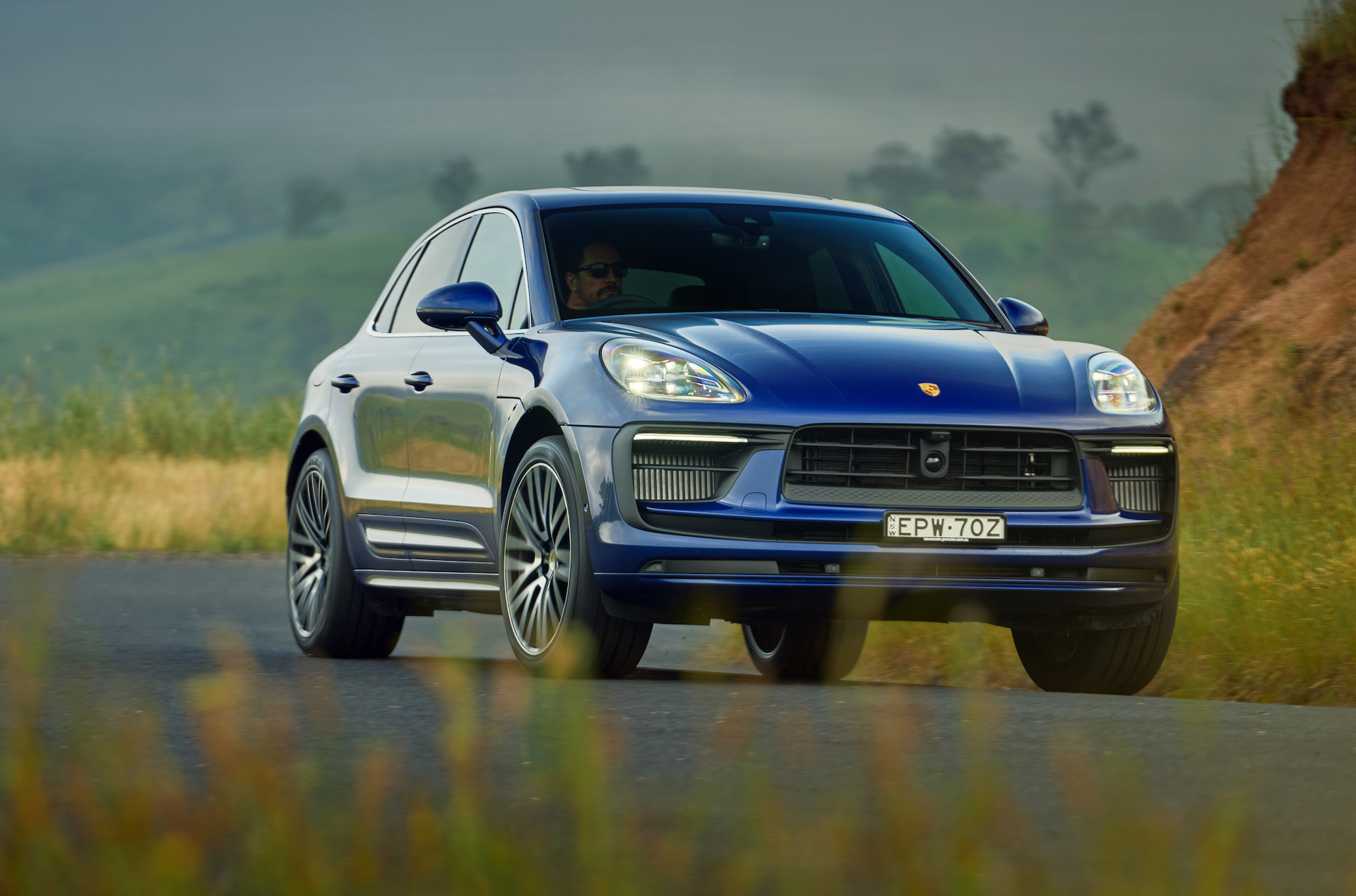 Porsche’s most popular model in Australia, the Macan, has been updated for the 2022 model and now it packs more punch across the board, while boasting a fresh and sophisticated design inside and out. It’s also surprisingly good value. 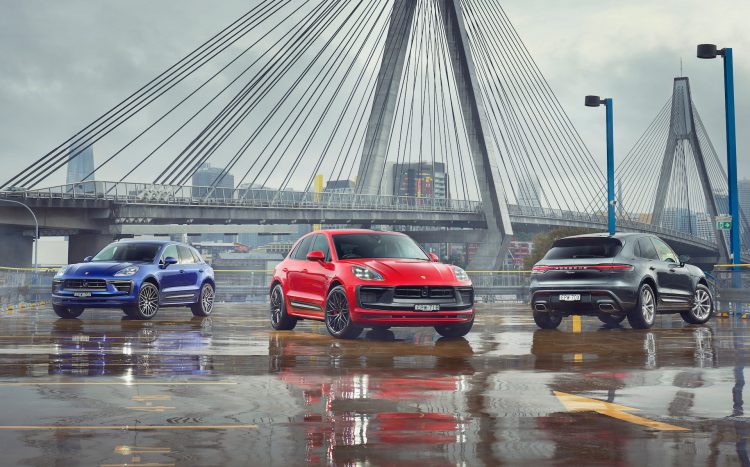 Yes, Porsche vehicles are usually among the most expensive in the market relative to their respective rivals. But that’s not necessarily the case here, especially if you compare spec-for-spec and performance-for-performance.

Three variants make up the 2022 range, spanning the entry Macan 2.0T, the Macan S, and the Macan GTS. There is no more Macan Turbo, but we suspect the badge will return when the all-new, fully electric generation arrives in around 2023. But you needn’t worry as the new GTS fills any void.

At the top, the GTS starts from $129,800. But again, to find a similar level of performance from the key rivals you’re going to have to spend quite a lot more. (All prices exclude on-road costs.) 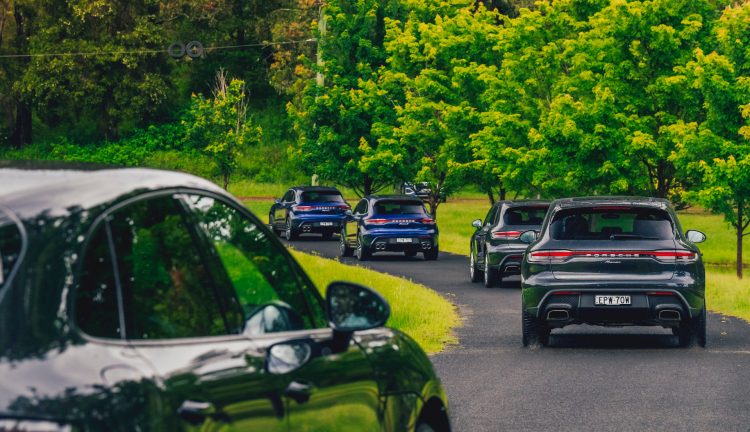 The revised design is mainly concentrated around the front bumper bar, with more of a horizontal theme for the intakes. All models also showcase updated LED headlights and include the Porsche Dynamic Light System as standard. Most of the body is pretty much the same as before, but around at the back is a new full-width taillight setup, with updated lighting clusters now integrated into the central light bar. This helps enhance the sense of width, while also meshing in with the greater showroom’s design language. 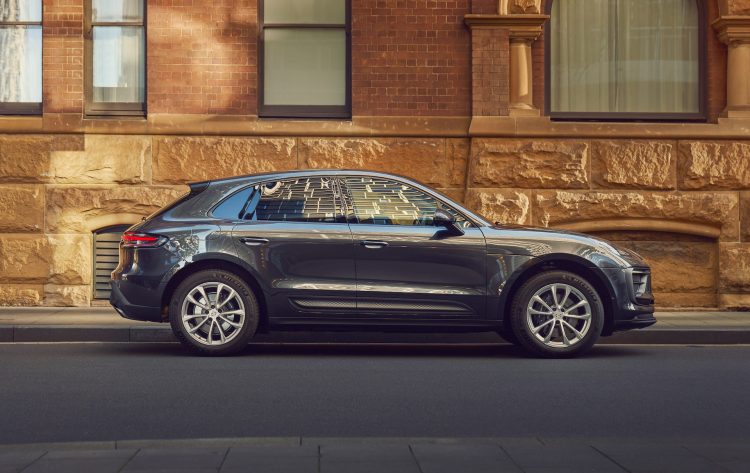 An easy way to spot the base model is by noting the 19-inch alloy wheels, compared with the 20s on the S, and the 21s on the GTS. You can of course option up to various sizes and styles throughout the lineup as well. On the base you get 350mm front disc brakes with four-piston calipers, and the S is uprated to 360mm with six-piston calipers, and then 390mm on the GTS with a special tungsten carbide coating for extreme heat resistance.

Inside, one of the main upgrades over the predecessor is the introduction of a suave new centre console panel. It gets rid of those spaceship-like buttons which used to cascade down the console, and instead goes for a clean, flush arrangement with hidden touchscreen-like buttons and metallic toggle switches for the climate controls. A 10.9-inch multimedia touch-screen remains on the dash, albeit underscored by similar flush buttons. 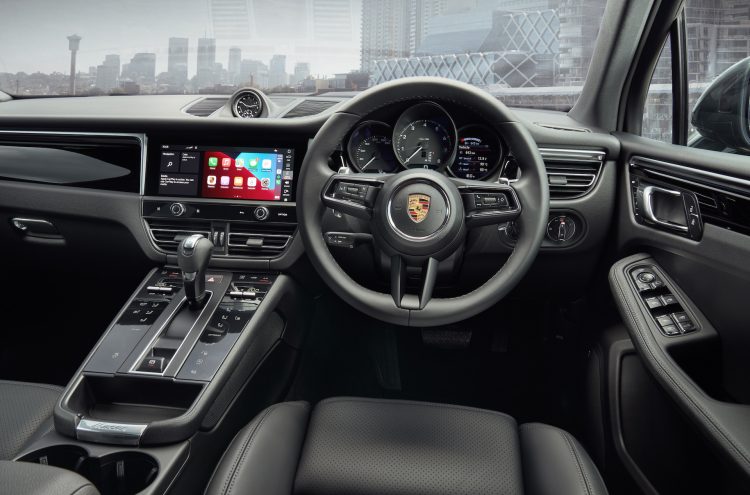 The base model is well-equipped, and passenger comfort is good thanks to soft and moderately supportive seats (awesome seats in the S and GTS). The driving position is also spot-on, as you’d expect, with an almost vertical steering wheel right at your chest. Visibility is decent through the front and over the sides, and thanks to the tidy proportions it is very easy to park in tight spots. Rear visibility is confined through the rear windscreen compared with some.

Rear seat space is still a bit tight compared with most rivals, particularly in the middle position. Getting in also seems narrower than some, with more of a hatchback-like aperture than a conventional upright wagon. However, it is good to see climate vents and a charging port back here, and a flip-down centre arm rest.

All models come with a powered tailgate and feature a 12-volt socket in the boot. The base model presents 488/1503 litres of space (down from 500L in the previous model), while the upper two offer 453/1468 litres. A collapsible space-saver spare wheel sits under the floor in all three models. 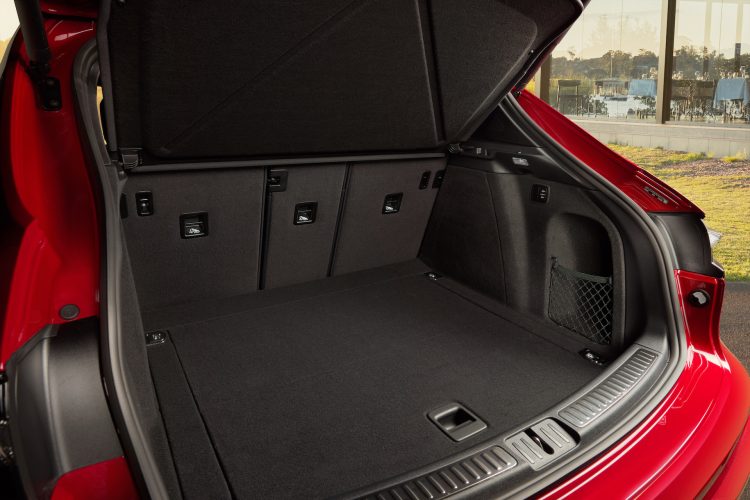 The base model retains a 2.0-litre turbo-petrol four-cylinder. However, power is boosted from 185kW in the outgoing model to 195kW, and torque is up by 30Nm, to 400. Performance is excellent for a base model. Porsche claims 0-100km/h is taken care of in 6.4 seconds, or 6.2 seconds when optioned with the Sport Chrono pack ($1880). During our test drive we managed to clock the sprint in just 5.90 seconds on a flat section of deserted road, using our Racelogic Vbox Sport.

That’s really nothing to complain about, especially for a base model. The engine is willing to rev hard if you want it to, and it gives off an appetising note complete with burbles and parps during gear changes. Mid-range grunt is also strong because all of that 400Nm is available from just 1800rpm and held until 4500rpm. For most buyers, this will more than suffice. 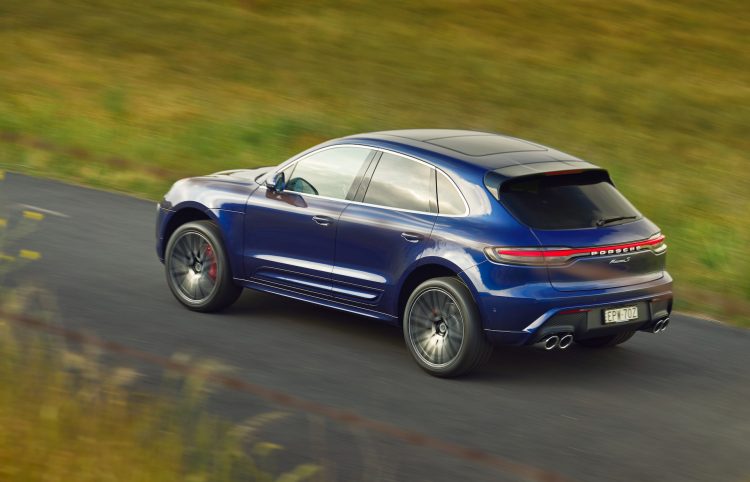 If you’d like a little more though the Macan S is certainly very tempting. It swaps the old, somewhat hollow and characterless (in comparison) 3.0-litre turbo V6 for the company’s newer 2.9-litre twin-turbo V6. Yes, it is in a ‘de-tuned’ state, but it delivers outstanding capability and theatre. Porsche claims 0-100km/h is done in 4.8 seconds, or 4.6 with the Sport Chrono pack. Our Vbox, again, found quicker results in the real world, reporting a time of just 4.44 seconds.

At that level it is quite a serious machine. It wasn’t that long ago when super sports cars and even supercars offered a similar sprint time. So in a mid-level mid-size SUV, it is very exciting. Again, mid-range pull is exceptional with all 520Nm available from just 1850rpm. This allows you to lean on the gas and fully utilise the all-wheel drive system when escaping from corners, without looking like a hoon or like you’re trying too hard. 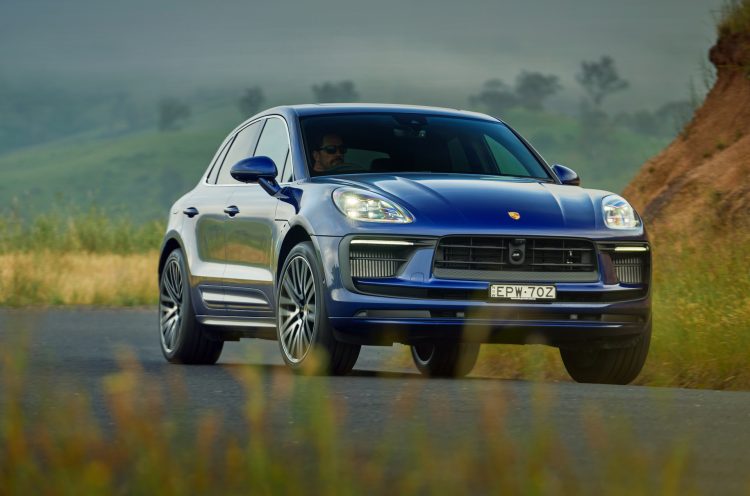 For us though it’s the engine’s character that appeals most over the old Macan S and its 3.0L unit. This gives off pops and bangs, and even a discreet turbo whistle as it spools, but also through the rev range the engine sound (not exhaust sound) changes and takes you on a journey. This is more typical of Porsche sports cars, particularly naturally aspirated ones. In our opinion, this is what adds that extra special dimension to the drive engagement and enjoyment over many rivals.

If nothing but the absolute best is your ticket, you need the GTS. It uses the same 2.9 twin-turbo V6 as the old Macan Turbo, with the same output. This thing really hauls hard when pushed. Most of the time it is a civilised machine and generates neat hints of performance through its deep exhaust. But it’s not over-the-top. It also drives with superb manners, remaining in higher gears and utilising its 550Nm of torque to get the regular jobs done. 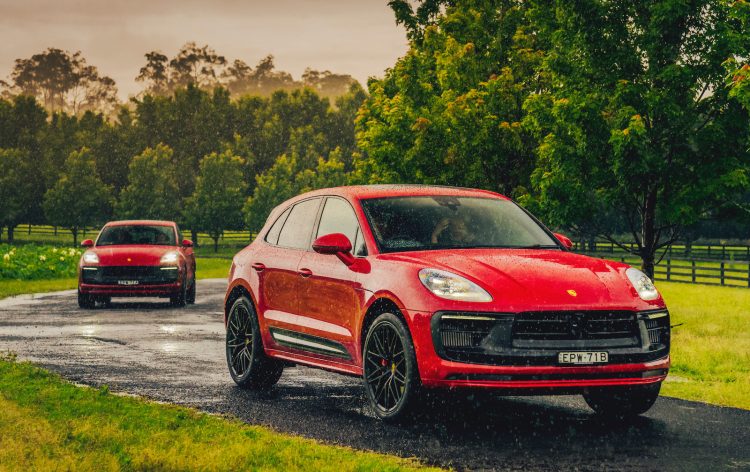 It’s not until you properly give it some that everything changes. It blasts along like an arrow hunting for its prey, with no regard for its 1913kg tare weight or innocent SUV stance. This thing is a weapon when it comes to speed and power. Porsche claims 0-100km/h comes up in 4.3 seconds, coming standard with the Sport Chrono pack, although we clocked it in just 4.16 seconds. That’s quicker than what we achieved in the 2020 Macan Turbo (4.18).

In terms of handling, they are all at the top of the class. Easily. The steering is just wonderful, providing a great balance of feedback and solidity, and the body control is extremely well managed. It also feels very agile and pokey in tight, windy conditions, like a well-sorted hot hatch, despite its weight, in comparison.

Ride comfort is also surprisingly good for a sporty SUV. In fact, it puts many rivals to shame. Obviously the GTS and its air suspension provides the absolute best in suppleness, but even in base guise the Macan does very well to absorb our shoddy country roads in Australia. If you want a driver’s car but need a mid-size SUV, the Macan remains as the ultimate expression of blending the two attributes. 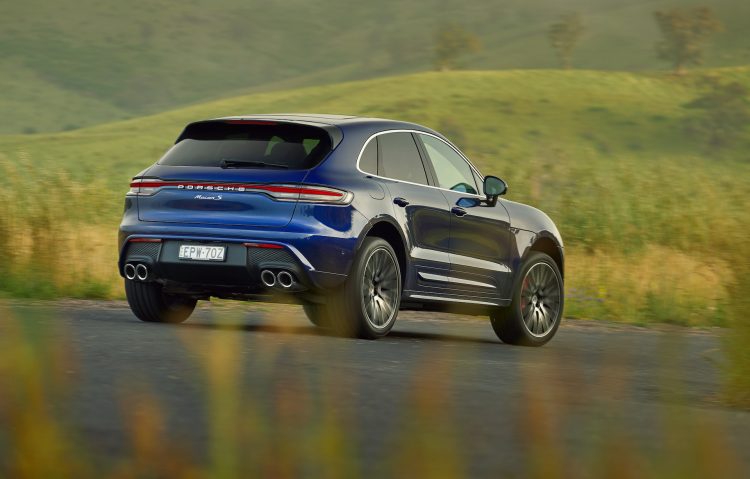 This 2022 model is set to overlap with the upcoming all-electric model in the next couple of years, so it’s great that Porsche managed to squeeze in a wholesome, better value, and higher performance refresh and design facelift for buyers in the meantime.

For us, the new Macan S seems the pick of the bunch. It represents superb value as it offers incredible performance, blowing most competitors out of the water. Yet it also undercuts them on price. The GTS does look the part, needless to say, with its darkened highlights, and it offers epic performance which only adds to its dreamy desirability. However, don’t feel like you’re missing out with the base 2.0T. The driving experience and in-car features are actually not far behind the others, at all.