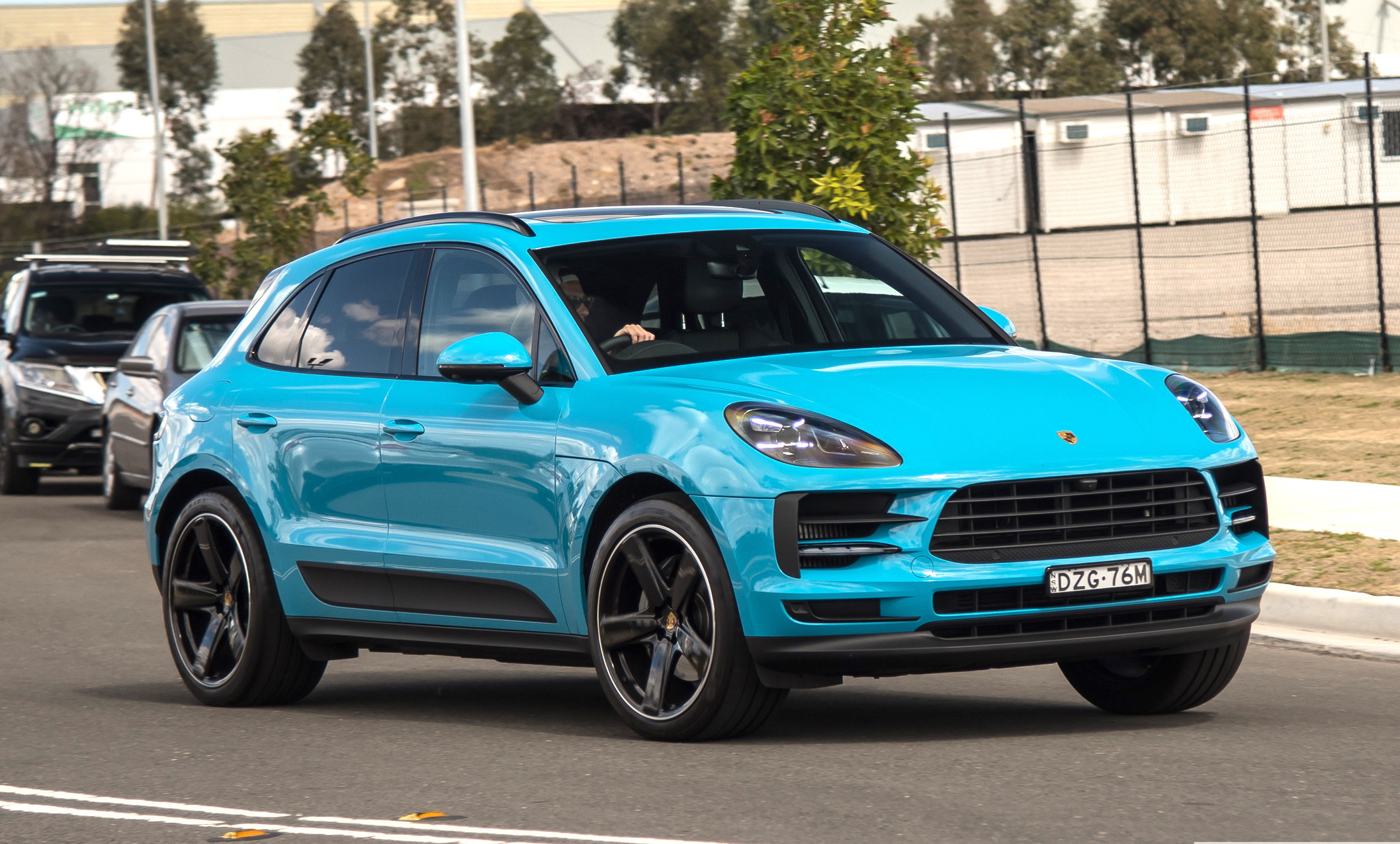 If you’re considering moving to Sydney’s glamorous eastern suburbs or the northern beaches you’ll probably receive one of these as part of a starter pack. Especially the Porsche Macan ‘S’ variant. It has a distinct aspirational demeanour about it that seems to coincide perfectly with finding that ultimate affluent lifestyle. It’s not saying you’re super-rich and that you’ve made it. But it does say you’re well on your way and you’ll be there soon. 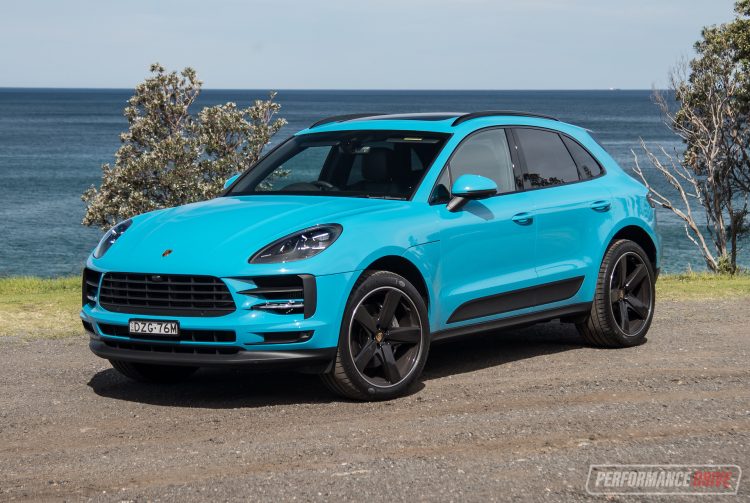 The Macan is the entry model Porsche and thus the most affordable Porsche. But, it has become more important to buyers and to the company than anything else in the showroom. You see, Porsche sold more Macans last year than any other model. In fact, it sold 86,031 of them around the world. That’s almost three times the amount of 911s that were sold in the same year (35,573).

It’s a win-win situation; customers get what they want, with an exclusive top-end luxury mid-size SUV, and Porsche can generate good revenue to build and develop its higher-end projects and technologies. It’s a commercial success, building on from the Cayenne which arguably helped put Porsche back in the black in the early 2000s.

Speaking of money, the new model kicks off from $82,200 for the Macan 2.0T, which is appropriately more expensive than the key base-model rivals, and from $98,600 for the Macan S (excluding on-road costs). Why did we say ‘appropriately’ more expensive? We think the Porsche brand is positioned a bit higher than regular Audi, BMW and Mercedes-Benz brands, and so, perceptively, it deserves a higher price. Not only that though, it is a higher quality product. 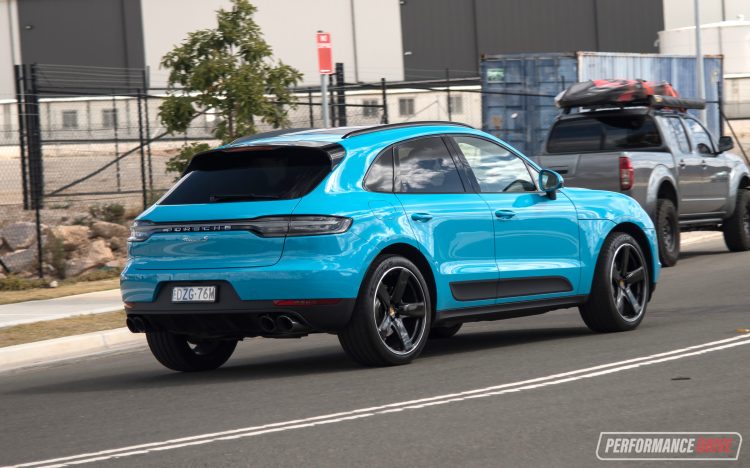 Existing or past Porsche owners will immediately warm to the interior of the Macan. The squared-off dash design, the simplistic yet semi-configurable instrument cluster with the all-important tacho sitting front and centre, and the superbly clean and tidy layout of controls is all part of the Porsche philosophy. This philosophy has been carried through for generations.

In the front we were expecting some more exciting seats, however. They are very comfortable and support you in all of the right areas. But for an S model, maybe some contrast stitching or slightly more inspiring side bolsters would be nice? That said, Porsche does offer an expansive personalisation menu so you can customise your decor and configuration to suit your tastes. 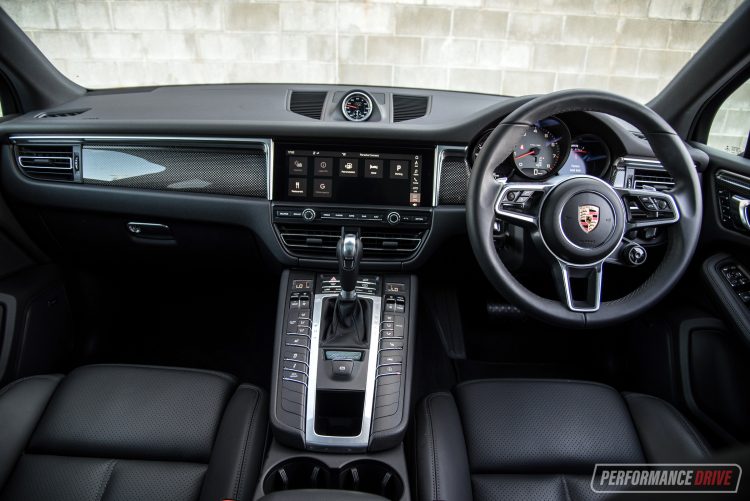 For the 2019 model Porsche has installed its latest 10.9-inch touch-screen media interface seamlessly into the almost-vertical dash. It is exquisitely presented, with very sharp graphics and pin-point touch response. Some of the menus do sprout out from random areas though, but once you get the hang of the list of menus down the right-hand side it quickly becomes your next best friend.

Porsche doesn’t offer Android Auto but Apple CarPlay is available. There’s also Porsche Connect Plus with Voice Pilot command, and you can configure the home screen layout in a number of ways by rearranging the tile apps. The screen also displays the comprehensive parking camera system, with one of the easiest control layouts we’ve ever seen in this department. 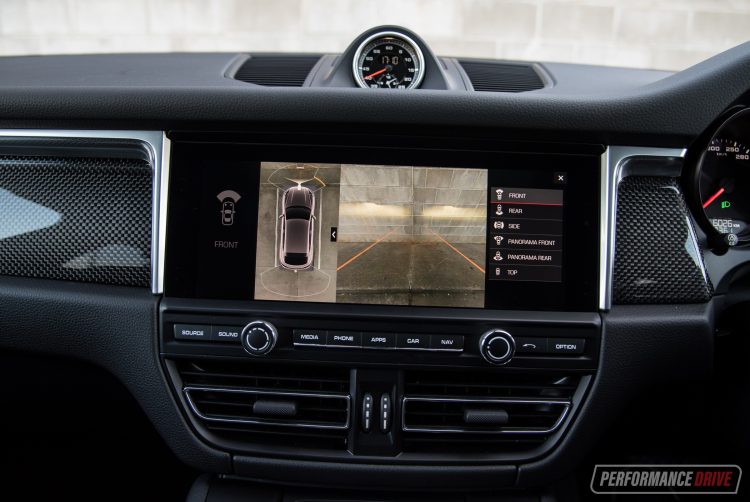 When prompted, either by engaging reverse or if the parking sensors are automatically activated, the camera display gives you access to all camera angles right there. We know there are many cars on the market that offer such ability, however, we find this layout just so simple and effective. You can toggle between front or side views, or go back to the rear view at any time during tight situations.

Underneath it all the Macan is still based on the VW Group MLB platform, like the Audi Q5 and a bunch of other group models. But, Porsche does its own suspension and chassis tuning, as well as fits its own braces and control arms in various places. As a result, the Macan is slightly smaller and sportier in terms of its design, and practicality does suffer a fraction. 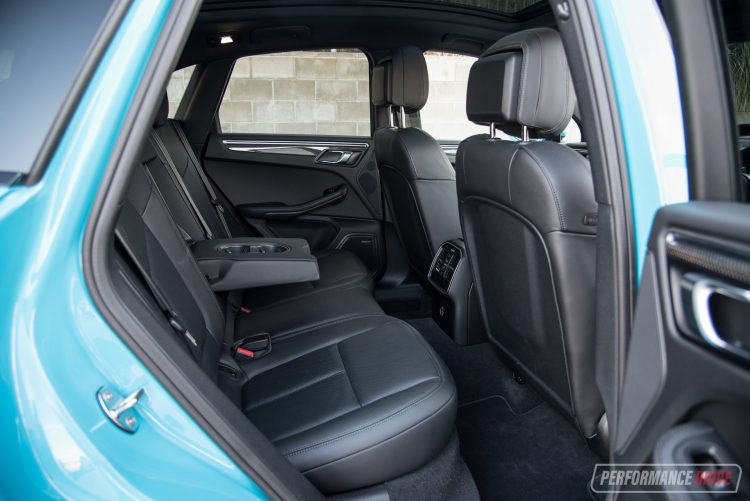 Rear seat passengers can be treated to seperate climate control and multiple charging ports, however, there is less headroom and legroom than most rivals in this specific class. It feels tighter and more confined in comparison, albeit far from cramped. The bench is comfortable and reasonably supportive – for a rear seat – and the quality of materials used for all fixtures blows the competition out of the water. Porsche applies an unrivalled attention to detail to its products, even at this entry level.

Boot space is rated at 500L in the standard configuration and expands to 1500L with the rear seats folded down. It’s easy to flip down the rear seats and there are other storage solutions within the boot area to secure smaller items. The boot floor is also a good height from the ground, not too high and not too low, providing painless loading and unloading. 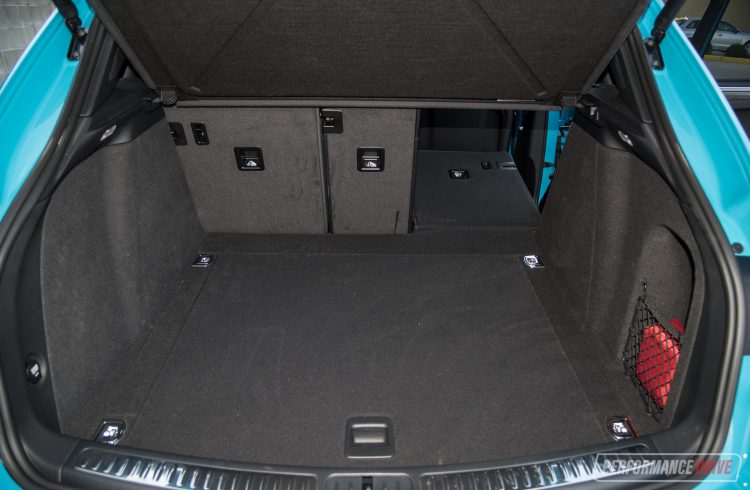 This 3.0-litre single-turbo V6 is relatively new, debuting in the Panamera not that long ago and then arriving in the Cayenne. It features a ‘hot vee’ layout, with the exhaust manifolds in the middle and the intake on the outer sides of the V. A new twin-scroll turbocharger is placed in the middle. It’s a pretty common setup these days, especially for premium carmakers.

With the turbocharger sitting on top of the engine and with very short exhaust runners, building boost pressure is done immediately as the exhaust gas doesn’t have to travel far before it hits and spins the turbine. For the driver it means very sharp throttle response, particularly during in-gear acceleration such as when overtaking. 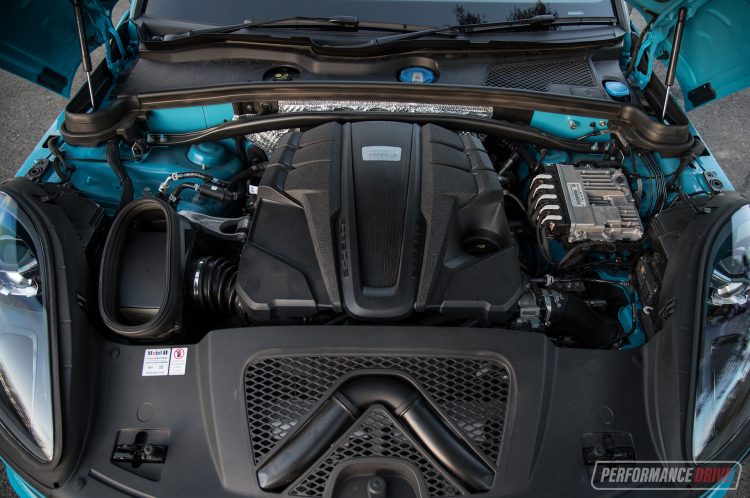 Porsche claims 0-100km/h comes up in 5.3 seconds, or 5.1 seconds when fitted with the optional Sport Chrono pack. We managed to find even better times than that though. This test car, featuring the Sport Chrono pack option (launch control and stopwatch), managed 0-100km/h in exactly 5.00 seconds dead. Considering this isn’t even the top Macan Turbo variant, this is an incredibly quick time.

Out on the road it doesn’t actually feel as quick as the numbers suggest. We think this is because the engine is just so linear. It builds power progressively, like a naturally aspirated engine. And although peak torque is available from just 1360rpm, 480Nm isn’t a serious number. Well, not to the point where it dominates the drive and throws out the overall balance. 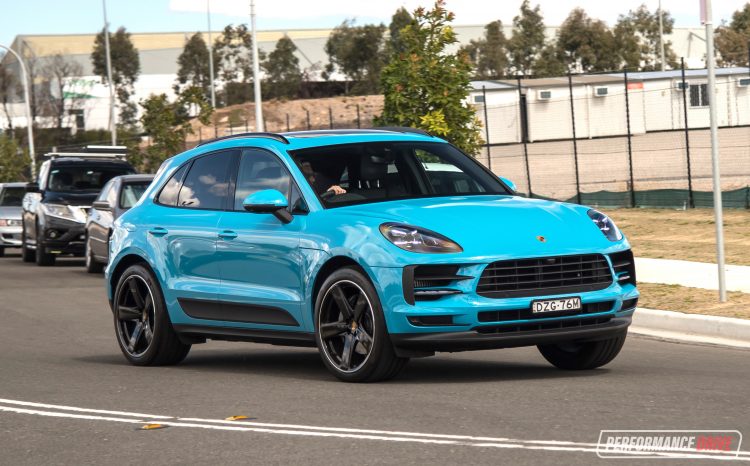 Working up and down the gears using the paddle shifters is nothing but joy. The shifts are seamless and extremely rapid, allowing you to get back onto the power exactly when you want it. This is especially fun when tackling a mountainous road with lots of variable-length switchbacks. And thanks to the strong low-end response, you can leave it in higher gears if you prefer.

The handling is obviously a key attraction to the Macan, but it’s the steering that wins our hearts. It steers so wonderfully. This test car features the optional GT sports steering wheel, too. Grasping this, you feel like you are in complete control of a genuine sports car. There’s a really high sense of confidence, mainly due to its solid and connected steering. And in our opinion the GT steering wheel enhances that.

Like we said in our recent Macan 2.0T review, the handling (not the steering) is a bit formal rather than playful. But push it hard and the Macan doesn’t change. It’s enthusiastic enough yet extremely accomplished and reassuring. Hitting mid-corner bumps does nothing, either. The standard coil spring suspension copes very well, catching and recomposing without upsetting the driving balance. Sure, the ride is a bit firm, but this is a sports car at heart. Porsche does offer an air suspension option if you really want to pamper yourself, however. 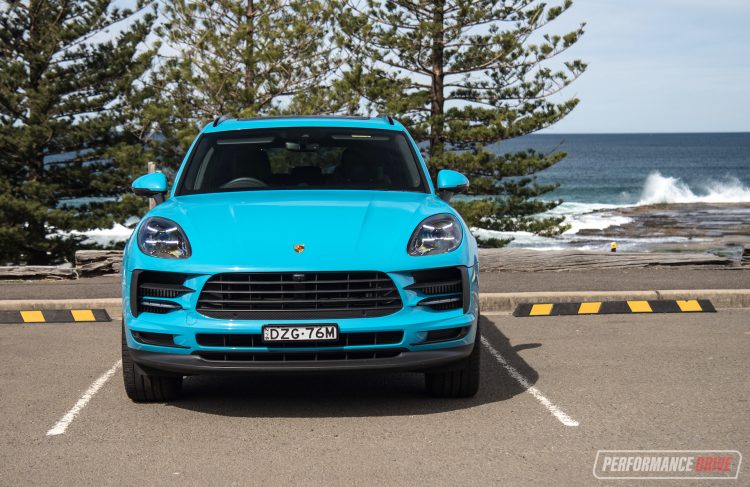 It looks so cool in this Miami Blue colour, and we love the optional 21-inch Sport Classic alloy wheels in black. Needless to say, this is one car we didn’t want to give back at the end of our week.

For us, the build quality, the telepathic steering, and the acres of tradition that so obviously inspire many areas are what make the Macan such an irresistible package. It is like no other SUV in this class, and it remains the dynamic leader.

PROS:
– Mechanical and connected steering feel
– Brilliant in the corners
– Interior quality
– V6 pulls strong, makes trademark Porsche sound
– Macan S has a certain whiff of exclusivity over anything else in the class
– Looks very cool in optional Miami Blue