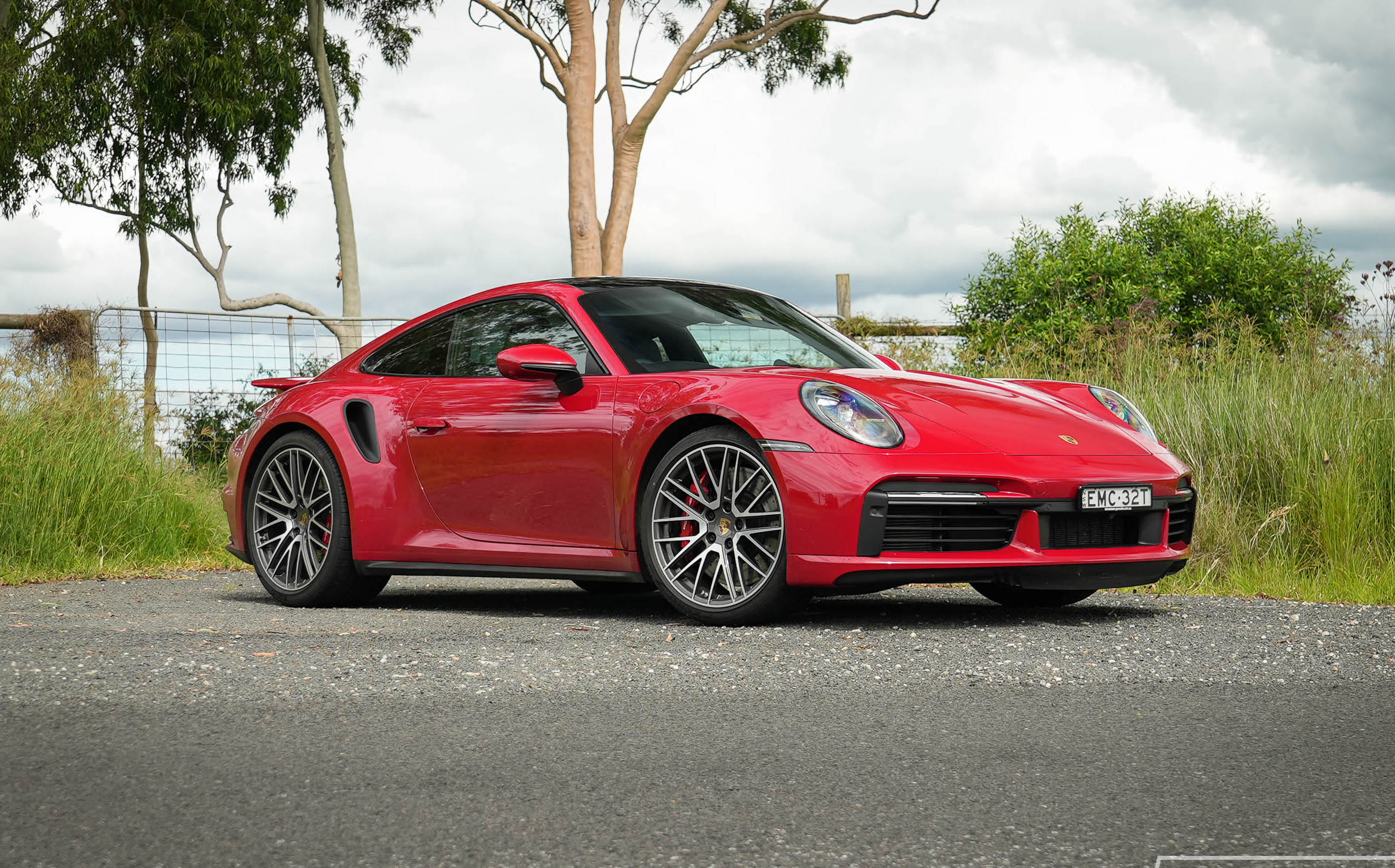 Porsche has been honing the Turbo nameplate now for almost 50 years. That’s near-50 years of development and priceless knowledge and data under its belt. It means the company automatically knows what combinations work and what combinations don’t work with each and every generation. In that sense, the latest, 2022 Porsche 911 Turbo is the culmination of the best of everything the company has to offer. 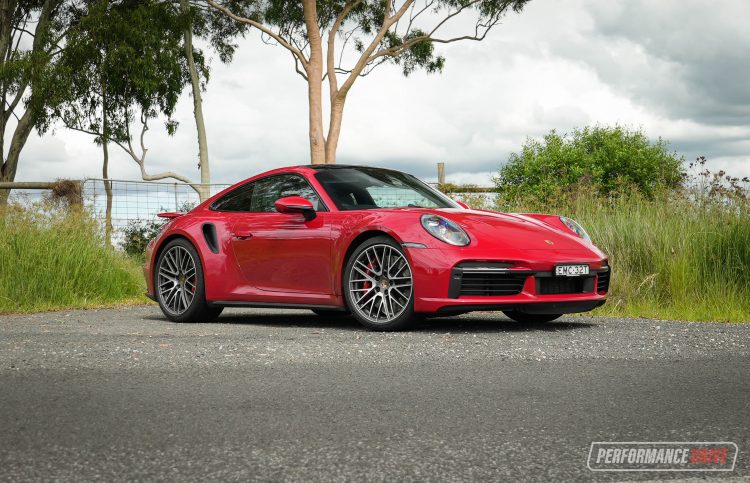 Here we’re testing the regular 911 Turbo. We say ‘regular’ because there’s also the Turbo S that sits above it. That offers a bit more power and comes with a few hardcore components, such as carbon ceramic brakes. Even so, this is not a tamed, watered-down model. It is the 911 Turbo after all. And it saves you $76,700, with prices starting from $404,900 for this and $481,600 for the Turbo S. A convertible option is available on both.

The price might seem high, and it is high if you compare it to a family SUV or small hatchback. But you really need to consider this as a proper supercar. It offers everything that a Lamborghini Huracan EVO ($459,441), or Ferrari F8 Tributo ($484,888), or McLaren Artura ($449,550) offers, in terms of performance, except perhaps the flamboyant styling and shouty exhaust notes. Although, the 911 has some practicality benefits over these. 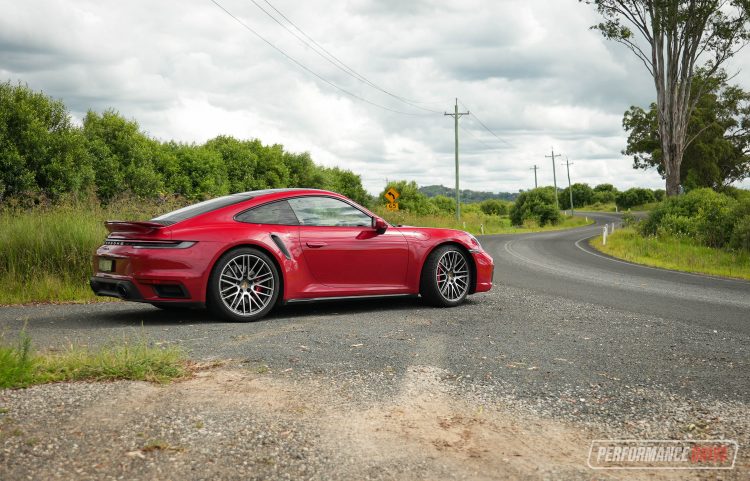 Despite its truly phenomenal underpinning technical highlights, which we’ll get to later, the cabin perfectly blends luxury, sportiness and refinement. This is a true driver’s office. The seats provide just the right amount of support and comfort, and the dash presents a clean and uncluttered array of infotainment functions. 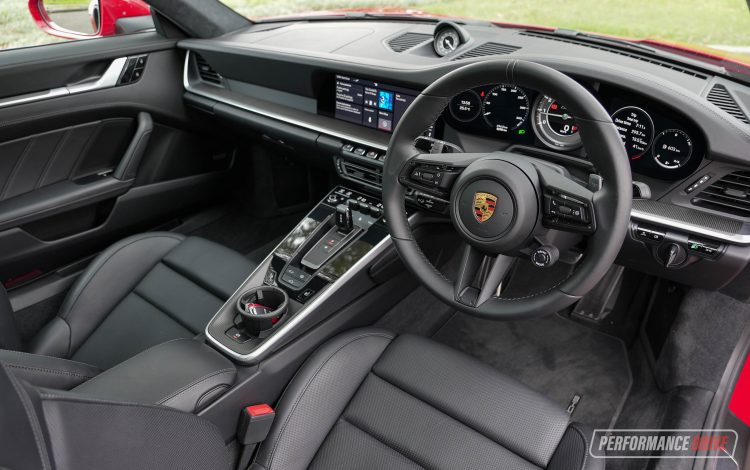 Of course, the driving position is absolutely spot on. And the steering wheel is just right in terms of size, position and feel, without too many controls on it to cloud your focus. You sit in snug in the sports seats although they might not look that special, and there are some storage options around. But, we find the centre console area lacks some space. It looks great with its flush buttons, but there’s not many spots for your phone or other nicknacks. 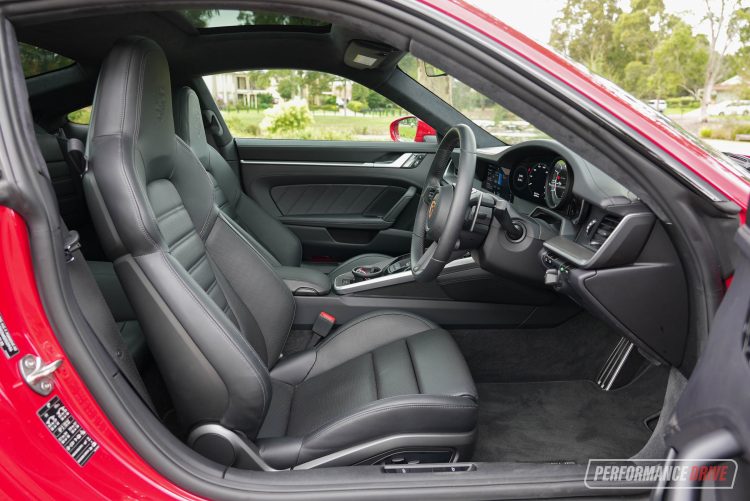 There are seats in the back but there are definitely best left for the kids. Out of curiosity, we did manage to install a forward-facing child seat in there and it fit with no major issue – better if the front seat is moved forward a bit. There is a bit of storage space (128L) behind the seat as well, however, it can be a bit of a pain to reach all the way back there. Under the bonnet is a 264-litre boot, which is about the same as what you get in some compact hatchbacks and SUVs.

One of the things we really love about the 911 Turbo is that despite offering supercar credentials in the driving department, it is practical and user-friendly. You could use this as an everyday vehicle, honestly. 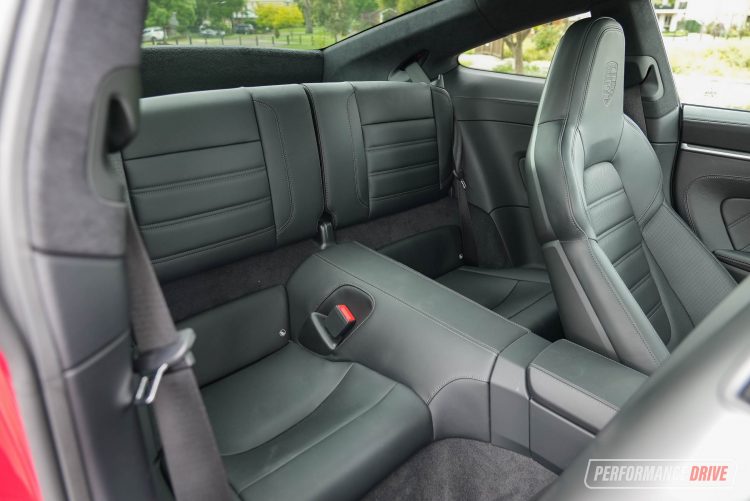 Under the back, behind the rear axle is a 3745cc twin-turbo flat-six engine. It uses two variable geometry turbochargers, larger than before, with exhaust manifolds similar to the GT2 RS that help to improve response and efficiency. There’s also piezo-electronic direct injectors for the first time, while the compression ratio drops from 9.8:1 in the old 991 version to 8.7:1 now. 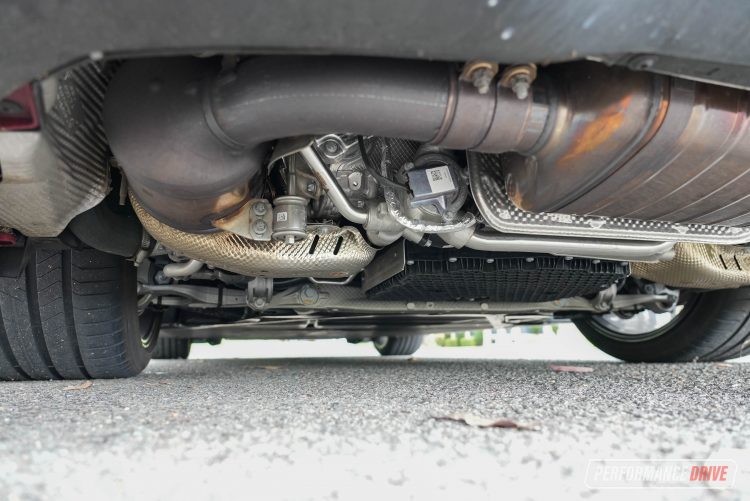 All of that monstrous power is sent meticulously through to all four wheels, via a new eight-speed dual-clutch transmission. The setup is truly astonishing, especially the gearbox. It provides incredibly fast automatic kick-down shifts and catapulting take-offs from a dead stop. In fact, using our Racelogic Vbox Sport and a private road we clocked 0-100km/h in 3.32 seconds, without launch control. That’s just full-throttle off the mark. Usually this sees some delay with dual-clutch transmissions. Not here.

With launch control, however, we saw 0-100km/h come up in 2.79 seconds, 0-200km/h completed in 9.32 seconds, and the old-fashioned quarter mile in just 10.66 seconds at 213.0km/h. Seeing these figures in the real world, and not on a specially-prepared drag strip is simply amazing. Remembering this has a big touch-screen, sat-nav, heated seats, and plenty of other luxuries. 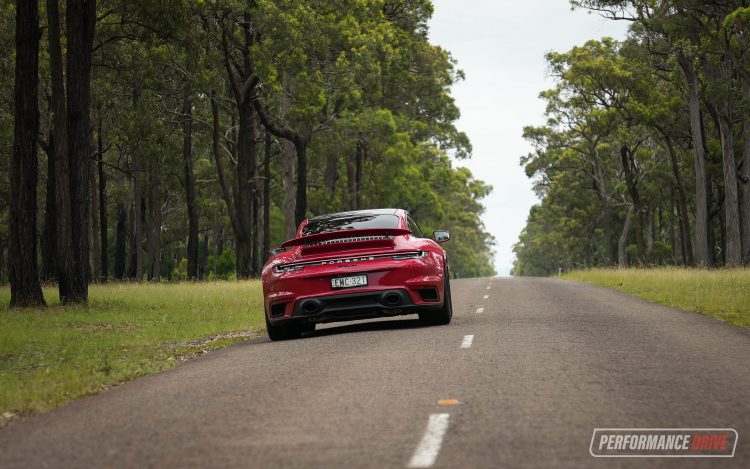 Out on the open road, it is difficult to explain just how right and so together it feels. It is incredibly well-balanced, yet ridiculously fast at the same time. It’s like a crazed axe murderer calmly playing a game of chess. Rarely does it seem like much more than an excellent sports car, until you put your foot down. Then it transforms into a bona fide supercar.

The ride character is firm but acceptable for day-to-day errands. It’s also very easy to drive in general, needing no special care when it’s cold, for example, and that eight-speed dual-clutch auto is faultless in traffic conditions and on tricky hills and driveways. It really is the best dual-clutch auto in the business as far as we’ve experienced. 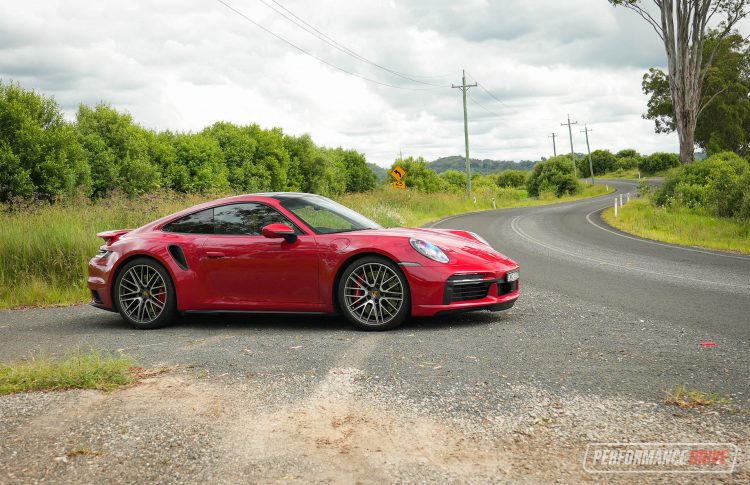 Take on some corners and you’ll quickly see what all the fuss is about. This isn’t a heavy car by today’s standard, with a 1599kg tare weight. So it feels light and agile darting between corners, yet you also experience that reassuringly heavy and rock-solid feel that German cars tend to offer. Grip levels and the subsequent g-force your body can be put through are nothing short of mind-blowing.

There are plenty of systems working together beneath the service to ensure absolute performance at all times, but you don’t necessarily notice them. They work in the background. After all, the 911 Turbo has always been a bit of a technical showcase of Porsche’s latest capabilities. 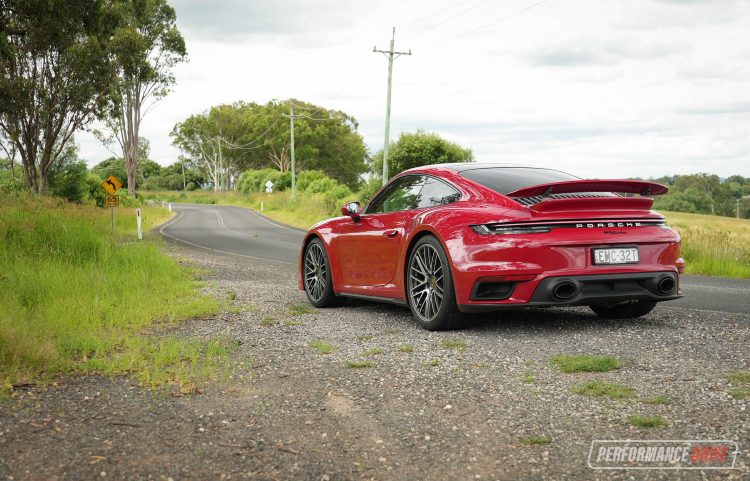 To name a few systems that ensure a clean and enjoyable journey, standard tech includes; Porsche Active Aerodynamics (PAA) with a rear wing that automatically changes angles on-the-go, Porsche Active Suspension Management (PASM) with sport and normal settings, and Porsche Torque Vectoring Plus (PTV Plus) that helps pivot the car, mechanically, around corners.

Interestingly, the official fuel consumption is rated at 11.5L/100km for both the Turbo and Turbo S. Not that you’re likely to be concerned about that sort of stuff if you’re shopping in this market. We averaged around 13.8L/100km during our time with this example.

This is the best all-round super sports car money can buy, in our opinion. It’s quicker than many fully-fledged supercars yet it’ll happily drive you to the shops or even tackle a snowy road. We can’t think of another production car available right now that gets anywhere near the broad range of capabilities of this machine.

While many of its nearest rivals have been around for a long time as well and have similar pedigree, they haven’t always followed a uniform formula. Take the Ferrari F8, for example. That could be categorised as a rival, but it started life as the V6 Dino, and over the years it has transitioned from a naturally aspirated V8 to a turbocharged V8. The 911 Turbo has always featured a turbocharged flat-six, while keeping its iconic 2+2 coupe form. If you want pedigree, this is about as innate and authentic as it gets.

PROS:
– Unrivalled versatility and broad performance spectrum
– Quicker than many more exotic supercars
– Steering and handling are astounding, and in all weather
– Uncluttered yet refined interior, with perfect driving position

CONS:
– Could do with more vivacious exhaust sound, at least in sport mode
– Hmm… Can’t think of anything else…