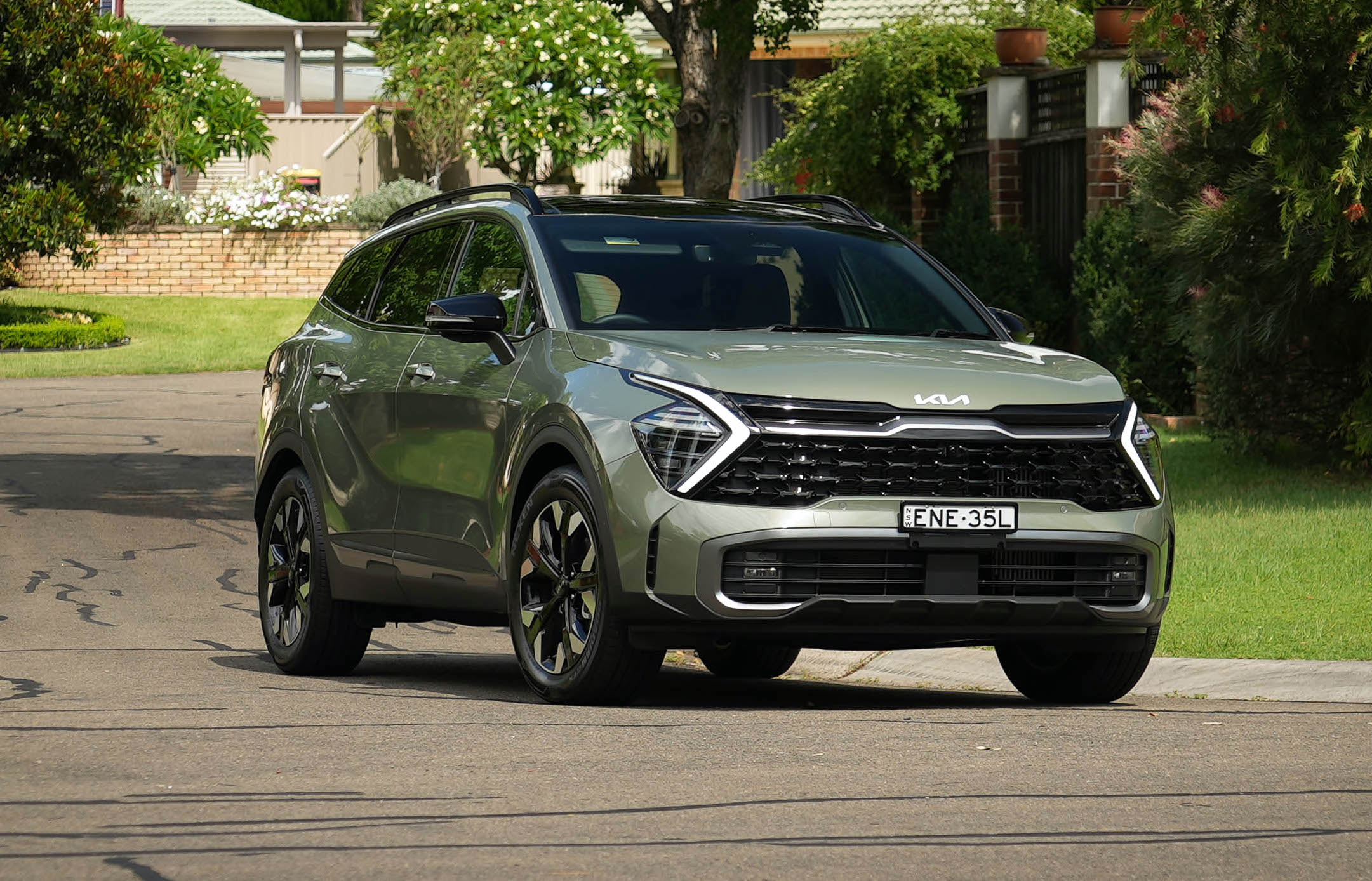 The all-new 2022 Kia Sportage has its work cut out. It has to compete with some very tough players in this field, many of which are just as fresh and as well-prepared as they fight for buyers’ attention in this class. 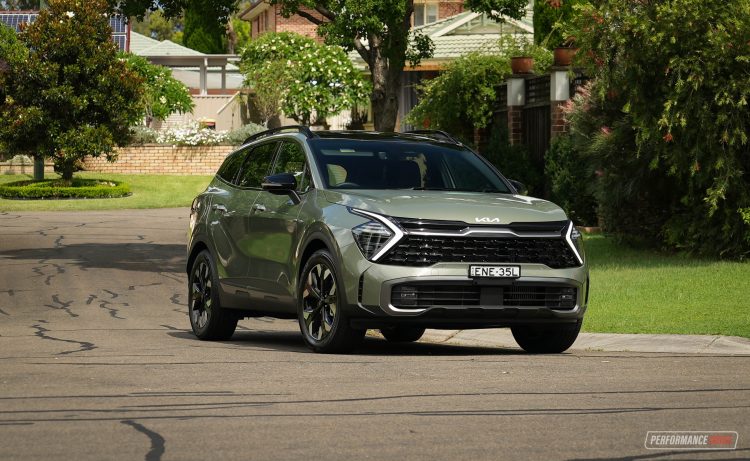 For this review we are checking out both ends of the lineup spectrum to get a full-scale idea of what the new model is about. We have the top GT-Line, finished in a rather chic ‘Jungle Wood Green’ colour ($520 option), and the absolute base model S front-wheel drive in white, with a manual transmission. Yep, you can still get a manual (only in the base model).

The GT-Line is available with a 2.0-litre turbo-diesel developing 136kW/416Nm or a new 1.6-litre turbo-petrol that produces 132kW/265Nm. It’s the first time a turbo-petrol engine is being offered in the Sportage, at least in Australia. And it comes paired with all-wheel drive. Meanwhile the S uses a common 2.0-litre petrol, generating 115kW/192Nm.

Prices start from just $32,445 for the new Sportage, in base S form with the manual. And when you start to see just how much vehicle you’re getting, you realise the price tag is quite attractive compared with most rivals. The automatic is $2000 more, which is probably a bit much to ask considering it is only a nothing-fancy six-speed auto. 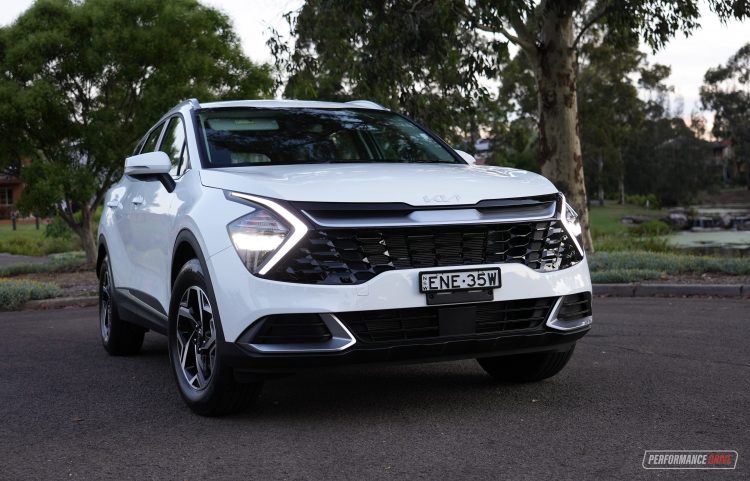 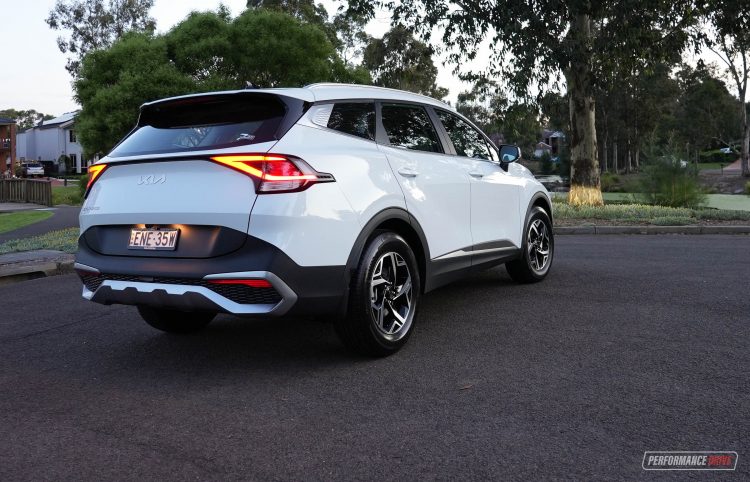 The new model showcases an intriguing design theme. We’re not sure we like the front end as it looks like it’s not finished yet. But it doesn’t matter if you’re not immediately in love with it, it definitely captures your attention and provokes thought. Which is good for this class because it is a very competitive segment so it’s difficult to stand out.

The rest of the body looks neat and well-proportioned, with a relatively fuss-free set of panel contours and lines. We love the new badges, which almost sit flush with the body and they appear to be made of brushed metal. Also very cool is the pinched taillight design which runs across the length of the tailgate. 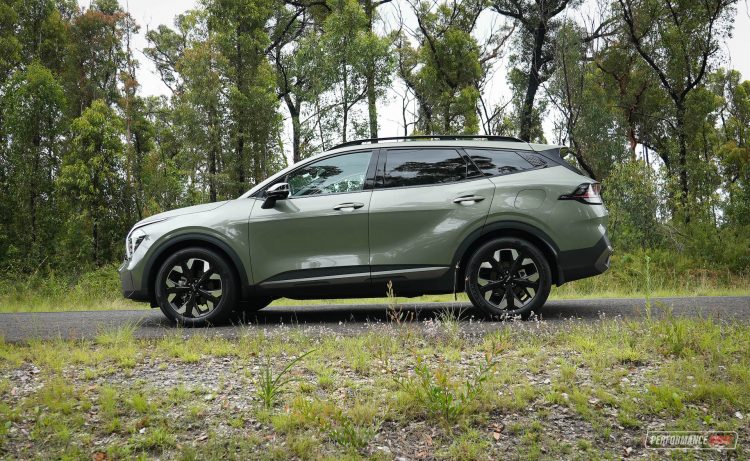 Going for the GT-Line gets you some nice two-tone 19-inch alloy wheels wrapped in 235/55 Nexen tyres, while the S comes with 17-inch alloy wheels wrapped in the same width 235/65 Hankook tyres. Other than that the S actually looks very similar on the outside. You need to look closer to spot the difference. Some of the trimmings are not as shiny, such as around the windows, and there’s more of that basic black plastic. But from a distance it is pretty much the same.

Inside is really something. This is a quality interior. We love the mixture of different materials in here, with fine wood-like inserts on the dash for the GT-Line and artificial suede sections on the seats. It’s a very contemporary decor, with clever design flourishes in various areas; the cool NACA duct-style interior door handles, spiny-around cup holders in the front, and dual-purpose climate control/media control panel (a button switches between the two). 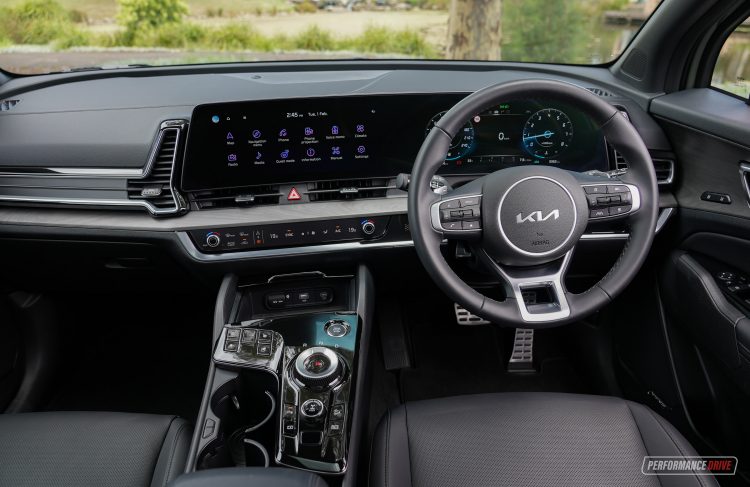 Fortunately, Kia has not forgotten about its reputation for practicality either. There are loads of clever storage spots around, including a mobile phone tray (rubber-lined) at the front, big door pockets, and convenient button placement. The ergonomics are also spot on, with a good driving position and plenty of adjustment to find it.

Even rear passengers are well catered for. There’s heaps of legroom. More than what you’d expect from this class. Passengers are also treated to charging ports in the GT-Line, climate vents, and more of that luxurious trimming on the doors. In that sense, this is both a great family car and a respectable business car. 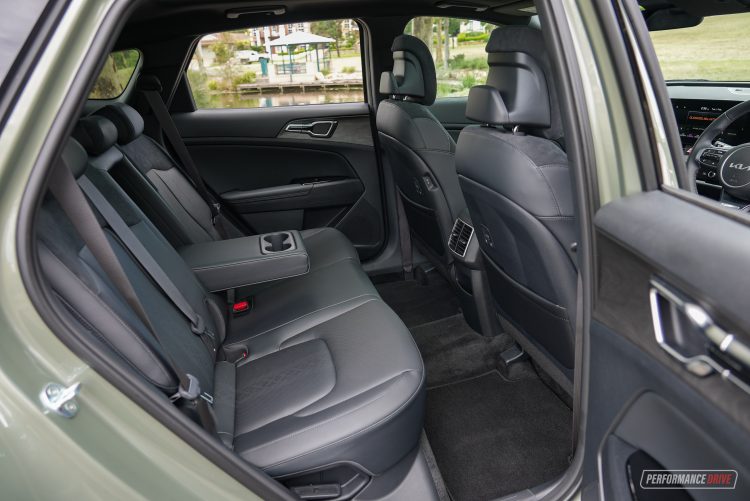 Boot space stacks up very well against the key rivals, with 543 litres in the default setting. Flip down the rear seats, which can be done from the back in the GT-Line, and you have a massive 1829 litres to utilise. There’s even a full-size alloy spare wheel under the floor.

Over in the S model, sure, you won’t find any of that classy trim. But it’s still a very nice place in here. Plenty of hard-wearing surfaces and materials make this a great option for busy families, or even for those looking for a comfortable ride-sharing car or company car. Rear passengers miss out on the charging ports offered in the GT-Line, but cup and bottle holders and climate vents remain.

The S doesn’t get the pull-tabs to fold down the rear seats from the boot area either, but it does come with a 12V socket and a full-size alloy spare wheel. Overall practicality and most of the useful features remain. It misses out on the dual 12.3-inch screens, instead receiving a still-worthy 8.0-inch media screen and digital gauge cluster. It definitely looks more expensive than it is. 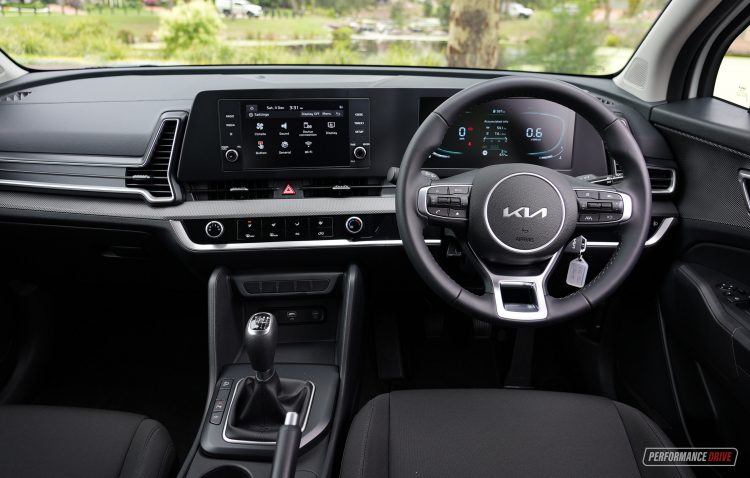 This is an all-new model. Meaning, it is a major generational change and includes a brand-new platform – shared with latest Hyundai Tucson. That includes everything from suspension, geometry, rigidity and safety; all improved. Driving dynamics have also been moved up a level. A few levels, actually. But before we get to that let’s quickly talk about these powertrains.

The GT-Line is offered – for the first time – with a 1.6-litre turbo-petrol. It is a new engine falling under Hyundai Motor Group’s Smartstream family, but the outputs are not that modern or appetising. With 132kW and 265Nm, it offers less grunt than the Honda CR-V‘s smaller 1.5-litre turbo (140kW), and in fact less than the 150kW offered in the smaller Cerato GT hatchback with the same engine as this (although technically not a Smartstream unit). 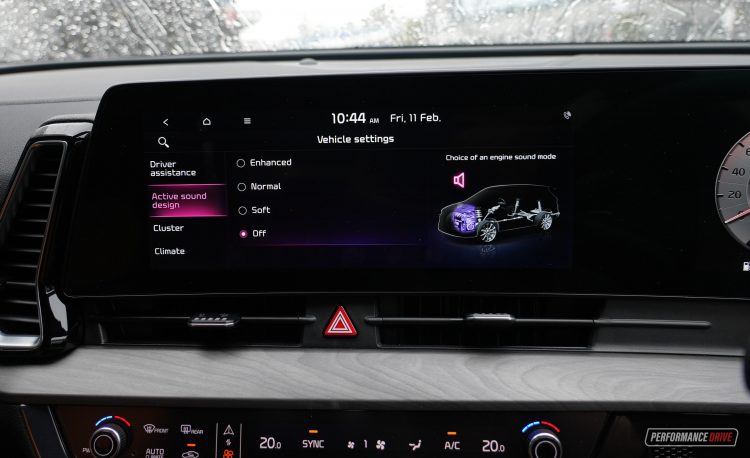 This, we feel, is not good enough for a top-line model. And it is the reason we think the diesel option is the pick. With 416Nm, and a bit more power, it’ll require less effort to get the same job done. Even if you care very little about power, economy is also superior in the diesel with an official average of 6.3L/100km compared with 7.2L/100km in this 1.6 petrol.

There’s another reason not to like this 1.6T; the old seven-speed dual-clutch auto. It hesitates badly off the line, including in completely normal conditions. It’s almost dangerously tricky during inner-city side-streets too, when you need to pull out from busy hilly streets. Honestly, on a personal note, my wife had a drive of this example and thought it was broken. And she likes/understands cars about as much as I like/understand scatter cushions.

Hyundai and Kia need to retire this transmission. They already have a very good replacement with the eight-speed dual-clutch auto, as found in the Sorento and Sonata. So why flog off scraps to consumers? Just bin it already. 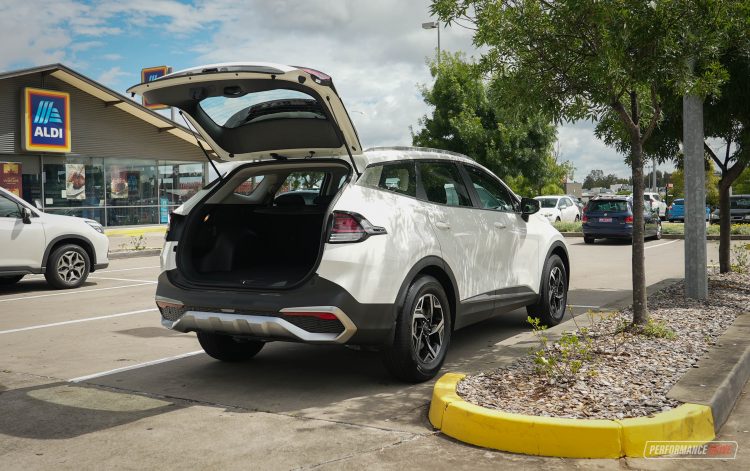 Fortunately, everything else about the drive experience is about as positive as it gets in this segment. Kia Australia did it own suspension and steering tune specifically for local conditions, so it meshes extremely well with our style of roads. We notice Kia seems to have dialled in a bit more comfort compared with the Sorento on this one, so it can soak up country roads a bit better in our opinion.

In saying that, it doesn’t feel as soft as the equivalent Tucson. But to us that’s a good thing as this feels a touch more lively and spirited in the bends as a result. The steering provides an adequate level of communication, and it’s not too sensitive or overly lazy. Good grip levels also provide lots of confidence. 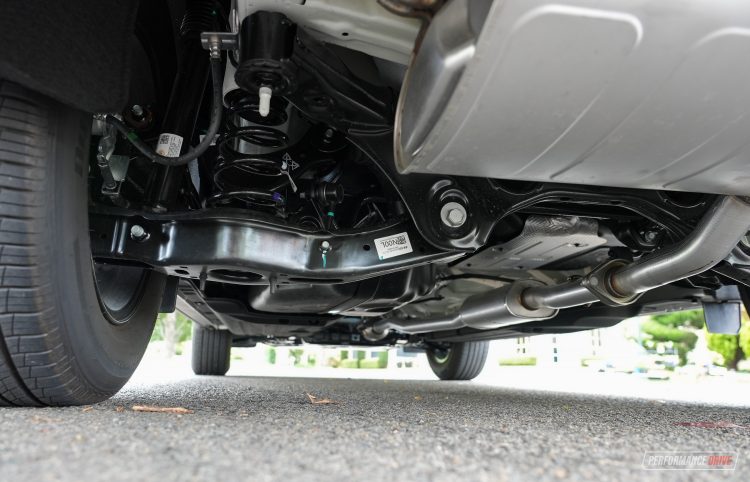 Despite featuring front-wheel drive, the S retains the same comprehensive multi-link rear suspension setup as the AWD models. This ensures a quality ride and good driving dynamics as well. The taller tyres on the S, measuring 235/65, provide lots of give on unforgiving roads such as unsealed back roads, but you can feel a degree of added roll when tackling twisty roads.

In terms of performance, the base 2.0-litre petrol, running a fairly high 10.8:1 compression ratio and all of the modern tech as per Smartstream philosophy, goes okay. Frankly, it is what it is in terms of acceleration and character. After all, it’s not promising otherwise. But it is likely to be very reliable over the years, and fuel consumption is decent in the real world. We averaged 8.2L/100km and the official average is 7.7L/100km. The manual transmission makes it fun, but if you’re not bothered, we can understand why most buyers will simply go for the auto. 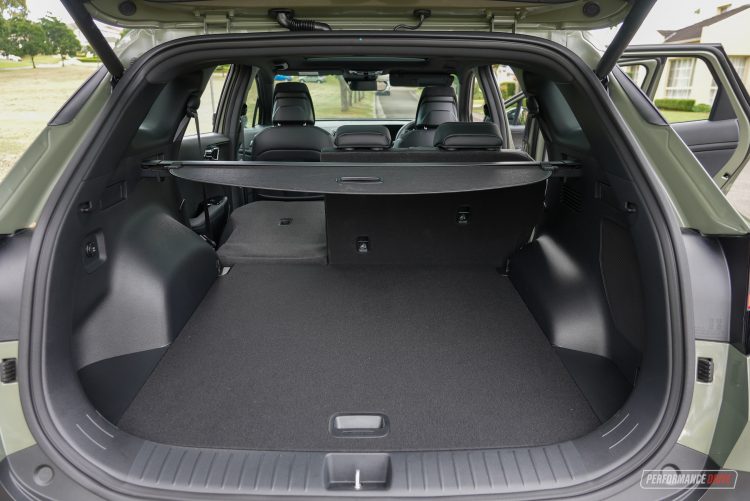 If Kia Australia could hurry up and secure the hybrid and plug-in options offered overseas, the new Sportage would be the one-stop-shop for all mid-size SUV buyers. It does everything, and most things really, really well. Our recommendation is to opt for the diesel if you can as the 1.6 turbo-petrol and pesky dual-clutch automatic have little benefit that we can see.

The base S is a great option for those in the market for a largish family car and those who have never previously considered an SUV, purely because it packs so much and all from a hatchback-like price. Heck, a mid-level Mazda3 is more expensive. We wouldn’t bother the manual as featured here, but the auto does unfortunately add a back-handed $2000 to the bill.

PROS:
– One of the best interiors of this class; quality, design, features list
– Good passenger space front and back
– Comprehensive lineup should meet most buyers’ needs
– Base S is excellent value for money
– Can’t ignore that 7-year warranty

CONS:
– 7-speed DCT needs to be retired; hesitation/clunky at low speeds
– 1.6 turbo lacks power for a top-line model in this class