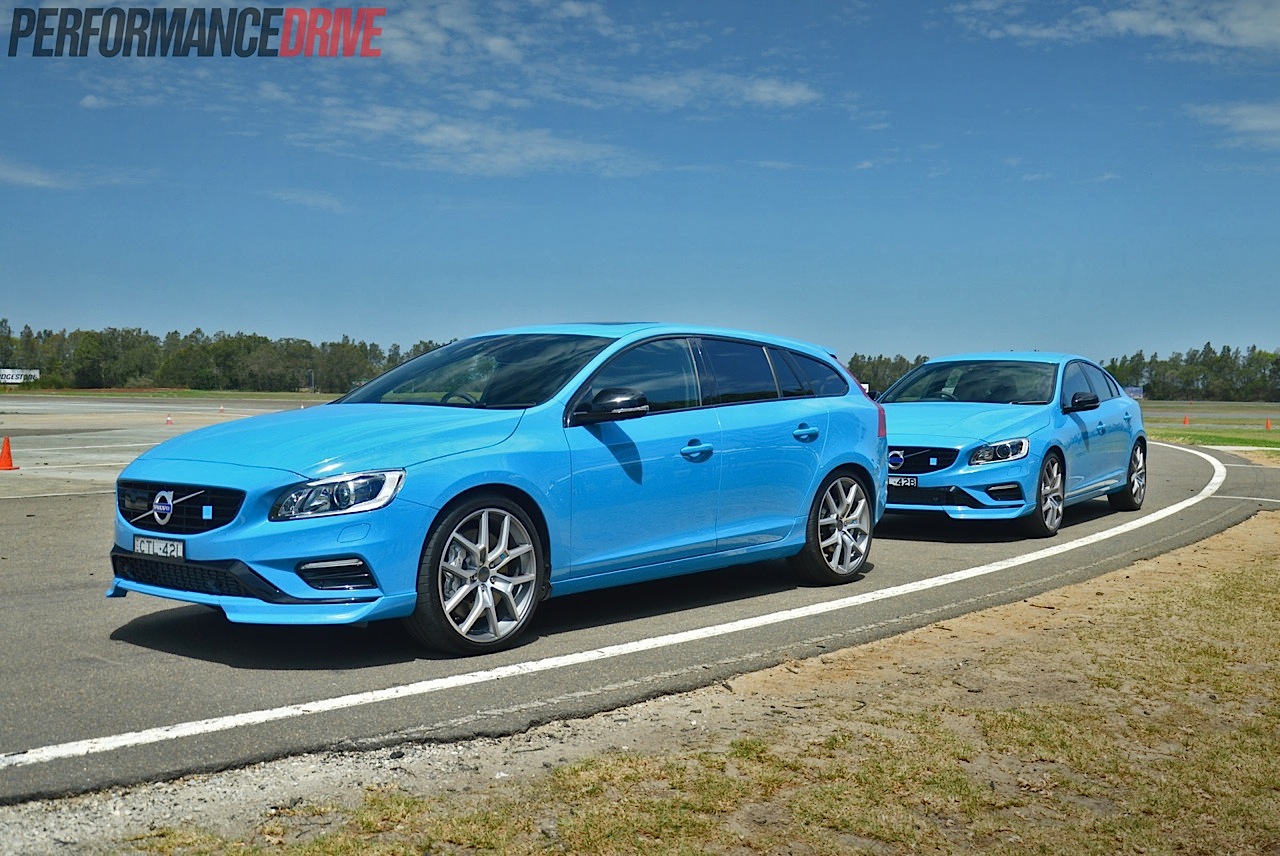 The evolution of the performance Polestar brand continues with the launch of the 2015 Volvo S60 and V60 Polestar. Handling has been fine-tuned, technology is updated, and the styling has been tweaked. German performance cars, step aside, the Swedes are on the way to setting new benchmarks. 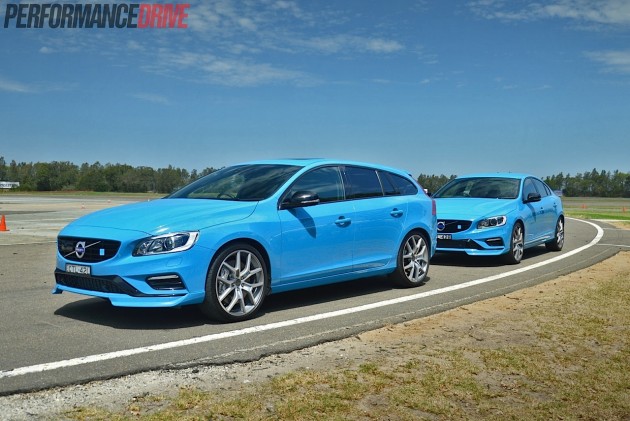 Australia was the official pilot market for the road-going Polestar production car program. We saw the first-ever S60 Polestar launched here in 2013, and since then there has been a 2014 model year update and now this, the 2015 version. Think of it as the finest tuned, most complete version, featuring all of the best Volvo has to offer in terms of performance for the S60/V60.

Unlike the 2013 version, this new model is now a regular part of the showroom range; it is not a limited edition. The same 3.0-litre turbocharged inline six engine is carried over, producing 257kW of power at 5250rpm and 500Nm of torque between 3000-4570rpm. All of this is sent through a revised six-speed automatic transmission with paddle shifters, and into a Haldex all-wheel drive system.

Starting prices are basically the same as the 2014 model, kicking off from $99,990 (up $490) for the S60 sedan, with the new V60 starting at $102,990. This means it sits in a fairly lonely part of the market, with no direct rivals nearby. Polestar says it did not look to any particular rival for direction in the making of the S60, instead asking media to place it where they think it goes.

In our opinion it competes against the Audi S4 in terms of size and powertrain packaging, and the Lexus IS F in terms of price and performance. You could also compare it to the BMW 335i sedan which is not a dedicated sports sedan like this is, and the upcoming Holden Insignia VXR (formerly known in Australia as the Opel Insignia OPC) which will be considerably cheaper but slower than the Volvo. Basically, Polestar forges a new segment, and that’s a hard job for any carmaker, let alone one which is only a toddler in the production car world.

For the launch program media were able to drive the new model on some terribly-laid roads around Gold Coast, and on an ex proving ground called Norwell Park. This gave us the opportunity to explore the breadth of the suspension in various settings, and on the track we could really stretch the 245-section Michelin Super Sport tyres mounted on the new 20-inch wheels. 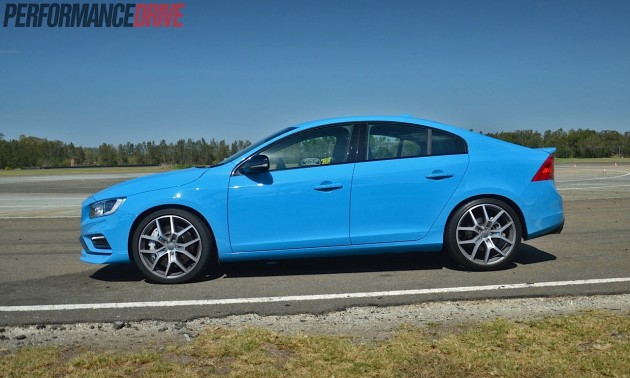 Let’s start with the engine. Many performance cars today present upwards of 300kW. So is 257kW and 500Nm enough? We think it is. Acceleration from 0-100km/h takes just 4.9 seconds when using the launch control system (holds revs when the brake pedal is depressed with the accelerator). This is a cracking time for a sports sedan/wagon.

On the road you can really use the torque to pull through the gears, and overtaking is no problem even if you leave it in a higher gear. Perhaps the best aspect to the engine is the engine note. Polestar has fitted up an active 2.5-inch into 3.5-inch exhaust which opens above 4000rpm, providing virtually a straight-through system from the catalytic convertor back. There’s a distinct burble and bass at lower revs and an angry rasp under full throttle. It’s superb.

New to the 2014 and 2015 model is a set of paddle shifters. Robert Dahlgren, current Volvo V8 Supercar driver and Polestar test driver, told us the transmission has been significantly fine-tuned for the 2015 model. While shifts are noticeably quicker compared with the original 2013 version, it is not near the benchmark in non-dual-clutch sports automatics in our opinion. Upshifting is quick but there is a typical ‘slur’ – albeit very minute – during the upshift, even in sport mode.

Downchanges are the main disappointment though. There is no aggressive throttle-blipping which means you have to wait for the revs to line up with your driving style before you can fully utilise the engine power and torque pulling away from corners. Downchanges aren’t very quick either, which means you have to spend time getting used to the anticipation and expected time of actual shift after you’ve pulled the paddle. 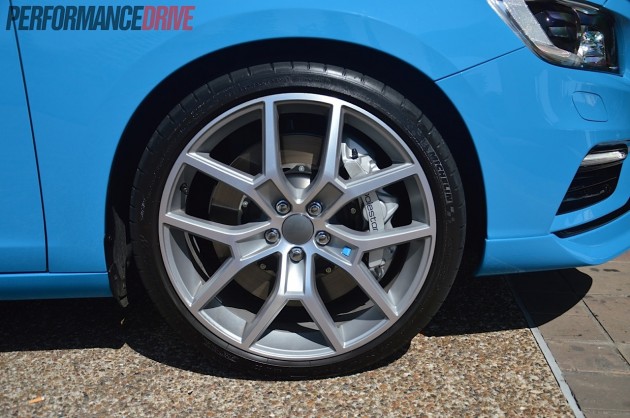 Fortunately, there is now six-piston front and four-piston rear brakes by Brembo, developed by Polestar. These are some fantastic brakes and much-improved over the 2013 items, with a new master cylinder and booster introduced to cater for the increased tyre grip. They didn’t show any sign of fade on the track, keeping in mind the test took place in Queensland in 30-plus degree heat. There’s good pedal feel and control, and brake distribution is also spot on. If you jump on them when the car is unsettled the brains behind the brakes sort out the best bias, continuously, resulting in stable and confident deceleration.

As for the handling, the regular S60 is already a nice setup. With the Polestar you get serious Ohlins dual-valve adjustable dampers and Polestar springs that are 80 per cent stiffer than the standard T6 R-Design springs. Ride and comfort on the street with the factory setting is noticeably firmer than the standard car – Volvo says the factory setting is about in the middle of the 20-way adjustment scope.

The V60 Polestar wagon has a slightly different front-rear weight distribution and receives minor adjustments compared with the sedan. It’s very difficult to feel the difference between the two though, both on the road and track.

Driving along the shoddy, broken up bits of bitumen in the mountains around Gold Coast we found the factory setup to be on par with other serious sports sedan setups in this segment. During the second leg of the road test Volvo wanted to show us a stiffer setting, which, to most luxury car buyers, is overly stiff. However, if you enjoy driving and driving hard on a daily basis, it’s good to know you can wind up the settings to a real performance-oriented level. 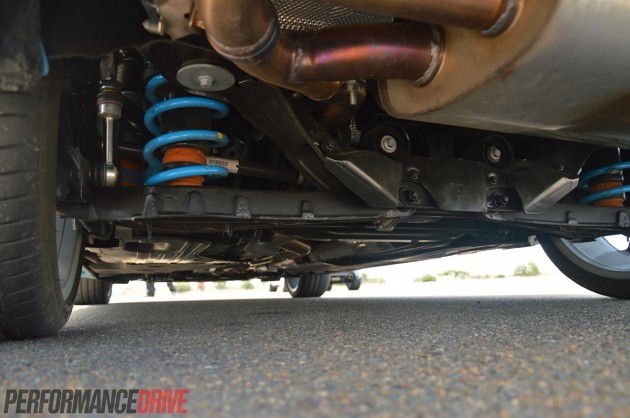 Around corners on the track the S60 and V60 show mild body roll and excellent all-wheel drive traction. It’s a pity the steering isn’t able to keep up with the hardcore suspension though. We think it deserves better. All rivals – well, rivals that we think are rivals – present a nicer, more enjoyable, and more engaging steering setup. The Volvo uses a hydraulic system with electric support, with three weight settings to choose from.

On centre there is a definite moment of play and sloppiness which does tend to detract from overall engagement. We get the fact a tighter/quicker setup could result in a busy/touchy feel on the highway, however, most rivals are able to achieve an ideal balance without compromise; Volvo should be able to do this as well. The setup is acceptable for daily driving on the street and so on, with relatively clear feedback. Precision is mild and that means it is easy and relaxing to drive.

Finally, it’s all down to the new Michelin tyres. These were not just a quick-fix, bolt up and away you go addition. Engineers were initially given one week to tune the car with the new tyres, but it ended up taking months in re-tuning and adjustments to fully calibrate the car with all related components. The tyres in question are just a few steps down from proper road legal track tyres. This obviously puts more pressure on various aspects of the car. 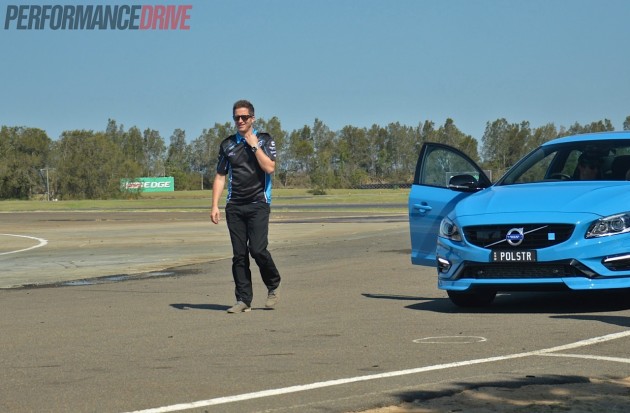 We were given opportunities to test the setup on the track, but, Robert Dahlgren kindly ran us around for a full-pelt hot lap. We were only in the car for the day whereas he played a big part in original testing and development. In other words, he was the best person to show us the full potential of the car. Cornering grip and power traction is amazing. It squirms under high cornering g’s, like it’s wearing a set of soft compound track tyres, and corner exits can be dispatched at full throttle thanks to the clever Haldex system.

The all-wheel drive doesn’t have a specific default front-rear bias, like other all-wheel drive systems out there. Instead, the Haldex unit continuously monitors the current traction level and adjusts accordingly. Oversteer is not really possible, except via weight shifting without throttle, and understeer is only really a problem if you carry excessive speed into a bend. Once you jump on the throttle the system will instantly adjust and pull the car straight. In its home land in Sweden in the snow, this is probably a completely different story. Hello four-wheel power drifting. 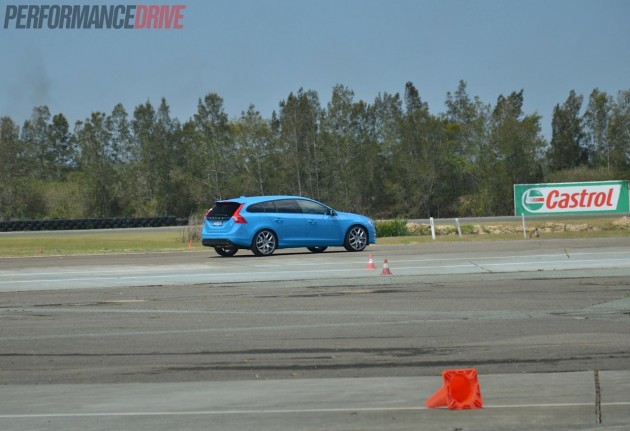 When you look at the hardcore suspension, the eye-popping brakes, and hear the almost straight-through exhaust, you think, ‘okay, so this is a very serious sports sedan’. But then you turn the ‘regular’ steering and use the ‘regular’ automatic transmission, you’re left with a slightly confusing package.

If Polestar wants to take on the big guns in the industry it is on the right track. With each evolution we’re seeing a healthy application of updates, higher performance components, and finer tuning. But if we had $100k to spend on a vehicle right now, we’d expect every area of the car to be balanced and matched up to the same level.

It will be interesting to see what comes in another couple of years. Hans Baath, Polestar managing director, is adamant the brand is here to stay and is under a long-term agreement. Although he withheld any future product plans, he enthused the idea of a possible SUV and even a performance version of the V40 hatch.

So, what’s next for the S60 Polestar? We asked Dahlgren what he thought of the car and asked what he would change if the possibilities were endless. He admitted he’d like more power, more speed, and more grip, but said if he didn’t want this then he would not be a racing car driver.

PerformanceDrive is aiming to put together a more in-depth review, including our usual performance test video, in the near future. Stay tuned.