The Ford Mondeo Zetec EcoBoost is a pioneer, and it has set the benchmark in many ways over the years. It’s also been one of Ford’s key catalysts for its new EcoBoost engine family. With the all-new model just around the corner, is the current gen still a class front runner? 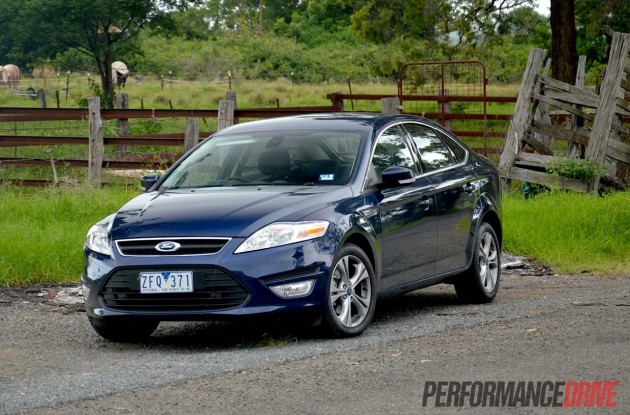 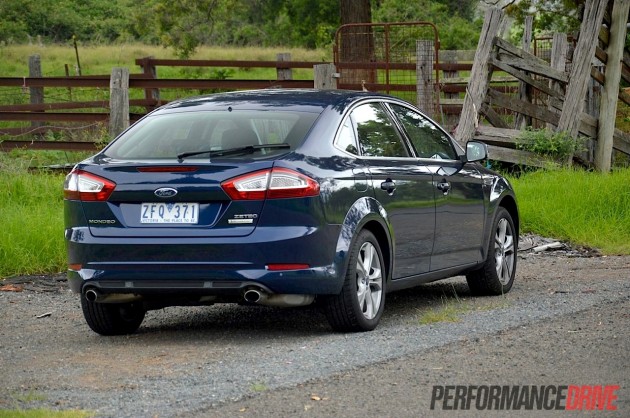 The Ford Mondeo has received its final facelift before the brand new model comes out early next year. The latest version gets slightly revised styling with new headlights and bumper bar fixtures, as well as some new features in the cabin.

Launched in Australia in 2011, the Zetec EcoBoost was one of Ford’s very first models to showcase the new EcoBoost four-cylinder. The engine has since gone on to become a part of Ford’s key strategies in striving towards improving efficiency and lowering emissions. The engine has also gone on to find homes in the Falcon, Focus, and Kuga, as well as various Volvos and Land Rovers, all in slightly differing specification.

In the Mondeo, the 2.0-litre turbo four-cylinder produces 149kW of power at 6000rpm, and 300Nm of torque between 1750rpm and 4500rpm. Its matched up to Ford’s latest PowerShift dual-clutch automatic transmission, sending power to the front wheels.

The Mondeo slots itself not too far under the Falcon in size, but with a more European feel. It competes predominately with the likes of the Honda Accord, Mazda6 and Toyota Camry. In some respects, it also competes with the mid-sized sub-luxury market, with cars like the Volkswagen Passat, Volvo S60, and to a slightly lesser extent the Audi A4, BMW 3 Series and Mercedes-Benz C-Class.

Back in the early days, the Mondeo brought a touch of elegance and intelligence to what was otherwise a dull and boring mid-sized car market. When the current shape first appeared in 2007, it was a highly praised product, winning various awards around the world for design, innovative accomplishment, and driving refinement. It was even the car of choice for Mr Bond in the 007 flick Casino Royale. 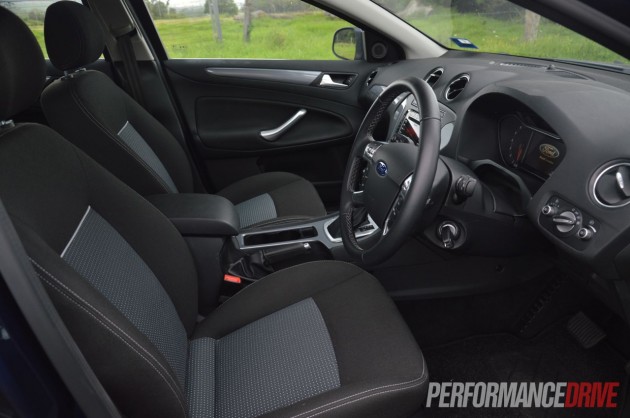 Since it helped set new standards in its day, it comes as no surprise that even today it sits up there among the most popular sellers on the market. In fact, in 2012, it was the second most popular vehicle in its segment in Australia, with 6626 examples sold (VFACTS). It was only beaten by the Toyota Camry (19,169).

The Zetec sits in the middle of the range in between the LX and the Titanium. It’s available in automatic form only. The EcoBoost engine is available in the Zetec and the flagship Titanium, but only in this hatch layout – the wagon versions come with a turbo-diesel.

The 2013 Zetec comes with a vast array of mod-cons as standard, although much expected among this segment. You get 17-inch alloy wheels, front fog lamps, dual-zone climate control, Bluetooth hands free with voice control, cruise control, a great sounding Sony premium audio system with nine speakers, and USB and MP3 compatibility.

The Mondeo is quite a sizeable car. You’ll be especially surprised by the size of the boot, as it doesn’t look like it is all that accommodating from the outside. It is huge for this segment, offering up to 816 litres with the rear seats in place, or a whopping 1919 litres with them folded down.

The copious capacity is aided by the boot lid which opens as a hatch, with the rear windscreen lifting up to really open up the loading potential. 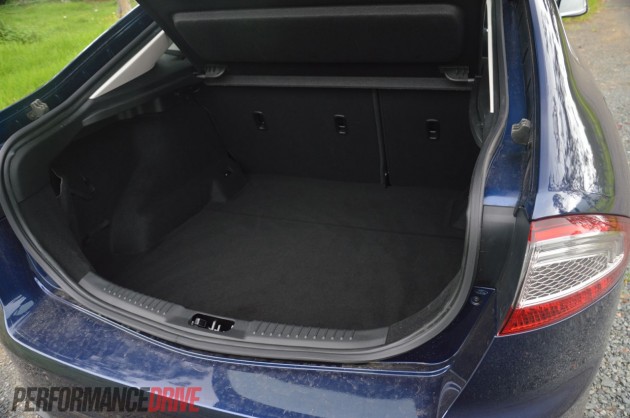 In the cabin, space is ample even for five passengers. It feels like there is more legroom than what most of the competitors offer, including the Honda Accord and Mazda6. The Toyota Camry is marginally larger on paper though, presenting 98.8cm versus the Mondeo’s 95cm.

The latest model update brings what Ford calls Human Machine Interface (HMI). In other words, it is a command centre that allows you to control virtually the entire car’s settings through one integrated menu system within the instrument cluster.

With so many features and customisable settings in cars these days, we found it very handy to have it all rolled into one, and available at your fingertips through two steering wheel mounted toggle buttons. The only problem is, you wouldn’t want to explore most of the menus unless you were stationary, as it does require a reasonable degree of attention. 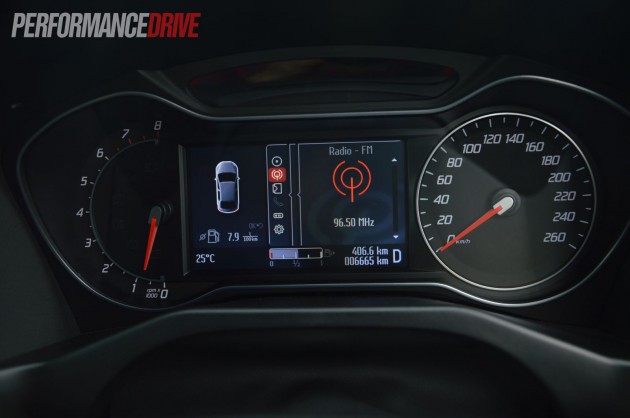 The design of the Mondeo was stunning enough to win a few awards in its day, showcasing Ford’s current styling philosophy which is still used on some new models today. However, it is starting to age now, especially with the striking new model just around the corner. 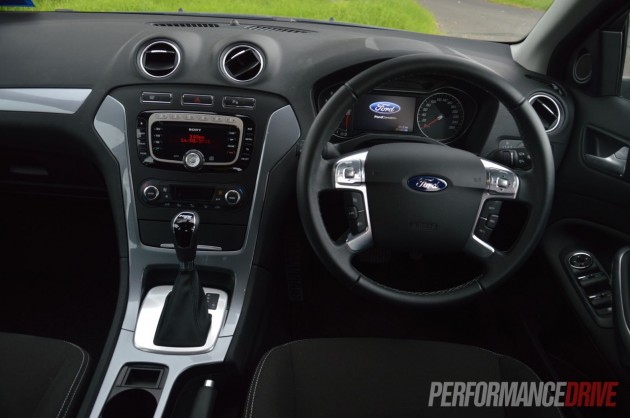 With front and rear parking sensors, pedal intrusion protection, and whiplash protection, the Mondeo has been given a five-star ANCAP safety rating. Stability and traction control, and a state of the art airbag system with nine airbags are also standard.

You could easily mistake the four-cylinder EcoBoost as a six-cylinder if you were none the wiser, in terms of sheer forward motivation. Like with most engines these days, the highest output from the smallest capacity is the goal.

On the road, the EcoBoost engine does a mighty fine job of providing respectable and somewhat exciting acceleration, and torque whenever you need it. Even though there’s plenty of lowdown torque to climb steep hills and pull a full family to their holiday destination, the engine isn’t scared to rev high up in each gear. It’s punchy and willing. It will effortlessly pull you out of a lane to overtake a truck in front, for example, all the while giving a sensory intone from under the bonnet.

Matched up to the PowerShift dual-clutch cog-swapper, gears are changed without hesitation. The quick shifts mean you put your foot down and it’ll find the right gear almost instantaneously, ready to give you a dose of acceleration. 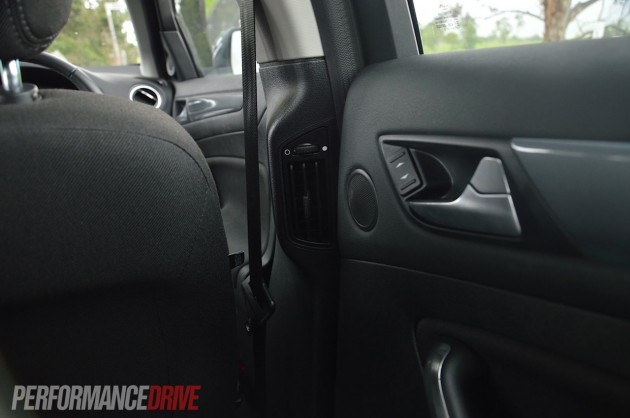 It also pretty quick from a standstill. We timed 0-100km/h in 7.4 seconds, which is almost dipping down into sports car territory. The time is no doubt at least partly thanks to the swift gearbox.

Although the Mondeo is a car oriented towards families, it is still joyously eager when it comes to handling. The steering is quick and perhaps a little too touchy, and the road-holding is sturdy.

Although far from disappointing, the engine’s performance is held back slightly by the softer, more comfortable ‘family-oriented’ damper settings. Grip from the chassis and MacPherson strut front and Control Blade rear suspension is impressive, but body roll soon becomes an issue when you approach corners with a keen speed. Though, the plush ride will definitely leave the kids dosing away in the back. 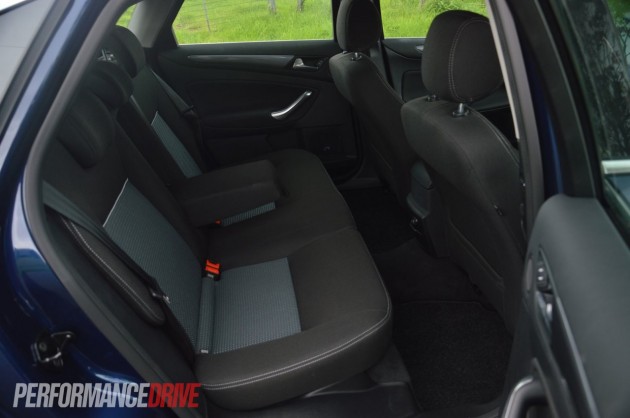 The Ford Mondeo is a medium sized family car. But don’t let the boring stigma associated with such types put you off. The Mondeo Zetec does so much more.

It’s larger than a medium-sized car inside, even comparable to a decent-sized SUV or its bigger brother, the Falcon. Power and acceleration is at the top of the class, and the all-important fuel economy, for a petrol, is very good.

Ford has done a great job at delivering all these important aspects in one award-winning car. We can’t wait for the all-new model, it’s set to be just as impressive and will likely sweep the floor in terms of segment technology and innovation once again.

We know this will cause a bit of a stir, but aside from the Aussie manufacturing and jobs associated, it actually makes you wonder just a little bit; is there a need for the base model Falcon anymore? Obviously the high performance turbo and V8 versions need to stay… 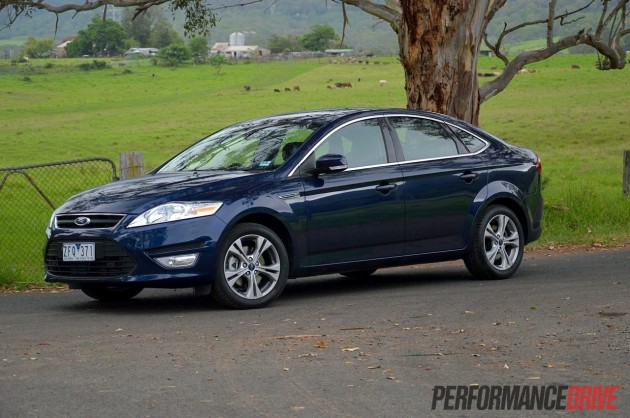