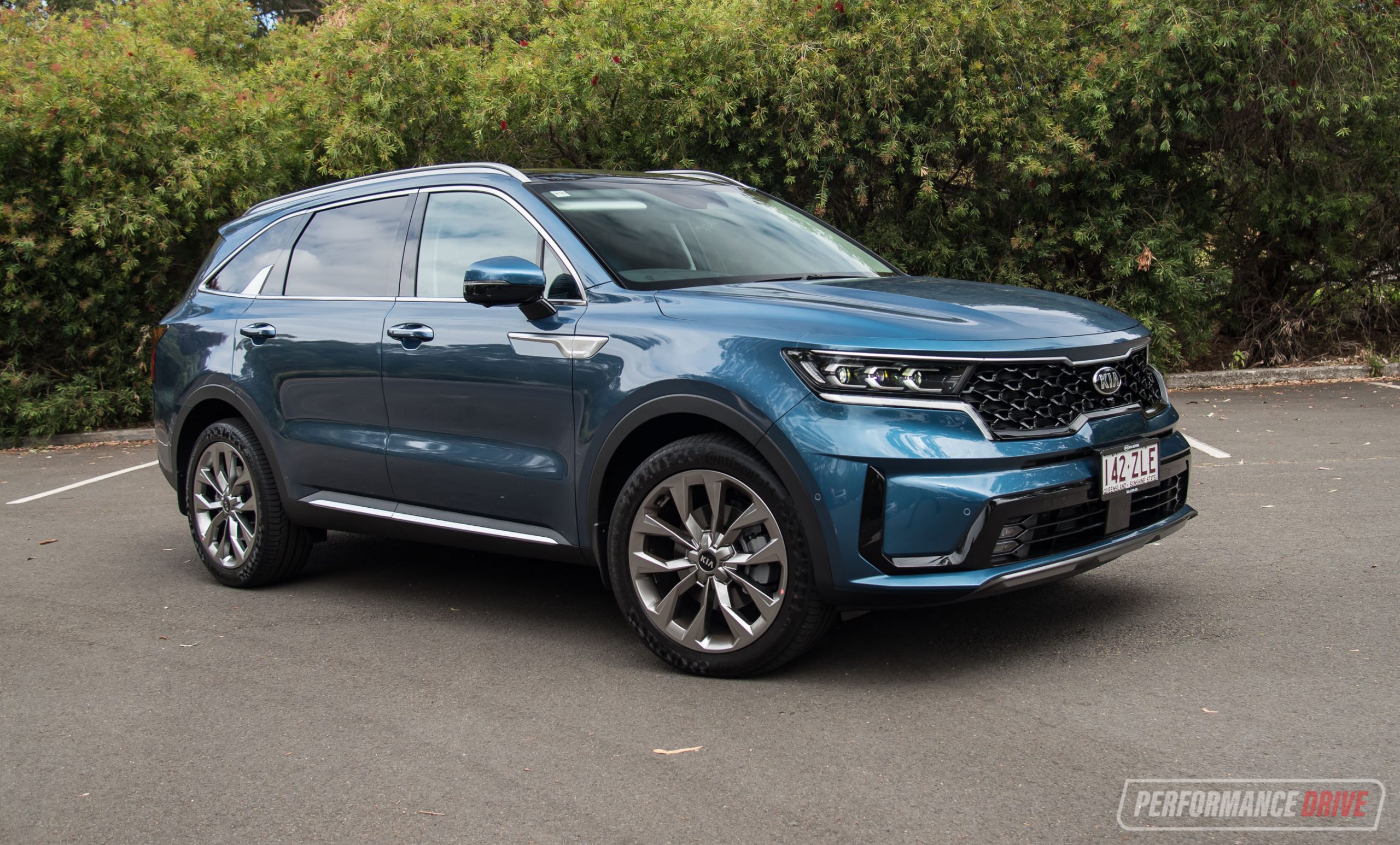 Here’s a lesson in how to large practical SUV. This is the all-new 2021 Kia Sorento. Specifically, the flagship GT-Line, which comes with enough bells and whistles to keep all the family happy. The new model continues with the same stream of variants as before, kicking off with the S, Si, SLi and top GT-Line. All are available with a fresh 3.5 V6 or an equally just-born 2.2-litre turbo-diesel four-cylinder. As a guide, the V6 is front-wheel drive while the diesel is all-wheel drive. The diesel also adds Hyundai Motor Group’s new eight-speed dual-clutch auto, which is certainly a unique combination not just for this class but the new vehicle industry.

Prices have climbed a bit over the predecessor, but that’s justified to some level due to the higher level of standard features. One could argue that more tech is just simple evolution and that shouldn’t provoke price hikes. Whatever the view, this GT-Line diesel starts from $65,290, while the equivalent previous model started from $59,490. For the absolute budget conscious the 2021 Sorento range opens with the S V6, starting from $47,290.

* Figures based on Sport+ variant, as tested by PerformanceDrive on the day. Factory claims may be different 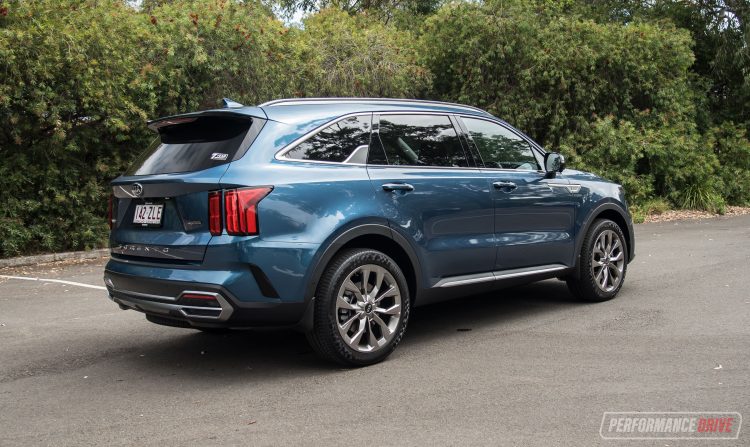 Just wow. This is a spectacular interior for a routine seven-seat SUV. The design of the dash and the way the climate vents are stacked to create a robust H pattern, and the cornucopia of perfectly integrated storage pockets and gadget holders; it’s all as thoughtful as it gets. You barely need to imagine putting an object somewhere, whether it be a drink or a random tidbit, and boom, there’s an ideal spot for it. Right there, waiting.

You can definitely tell Kia has taken in a lot of customer feedback in developing this new interior, that’s for sure. The seating positions up front provide excellent ergonomics and posture, with a nice clear view outward to reduce any chances of claustrophobia or car sickness. Despite being so practical and considerate, the layout of the controls and the styling of the fixtures is all really interesting. It’s pleasant yet savvy. A hard mixture to perfect. 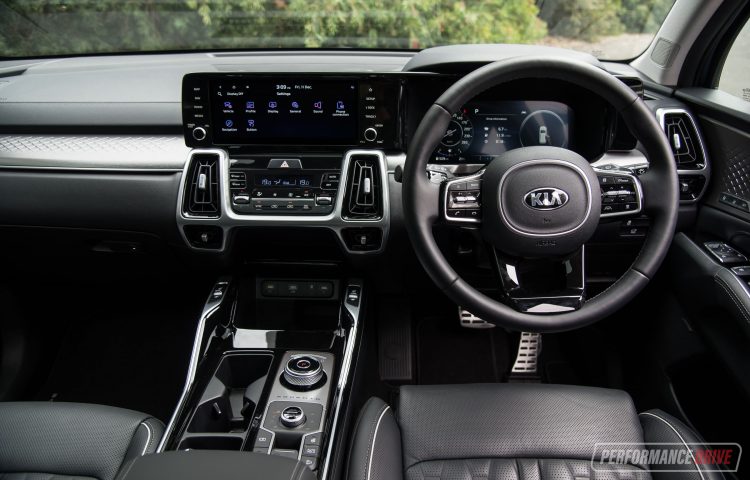 The GT-Line comes with all the goods Kia has to offer. Chief among which, in our opinion, is the sharp new 12.3-inch digital instrument cluster. It doesn’t offer a wide variety of display configurations, which is a bit unusual since it is just a screen of arranged pixels. But the innovative blind-spot camera system is superb.

Basically, if you flick the left indicator the left gauge becomes a view of a camera mounted under the side mirror. Flick right, and the right gauge is automatically replaced with the right-side view. The speed remains shown in digital form no matter what happens, and the dials return to normal as soon as the indicator is turned off.

To be honest, we didn’t really glance down at the views during our drives all that much, mainly due to a habit of physically checking blind-spots. However, we can definitely see how this could come in handy after longer-term use. There’s no doubt it could drastically reduce the chances of a side collision during those occasions where a vehicle unnoticeably appears in the danger zone. 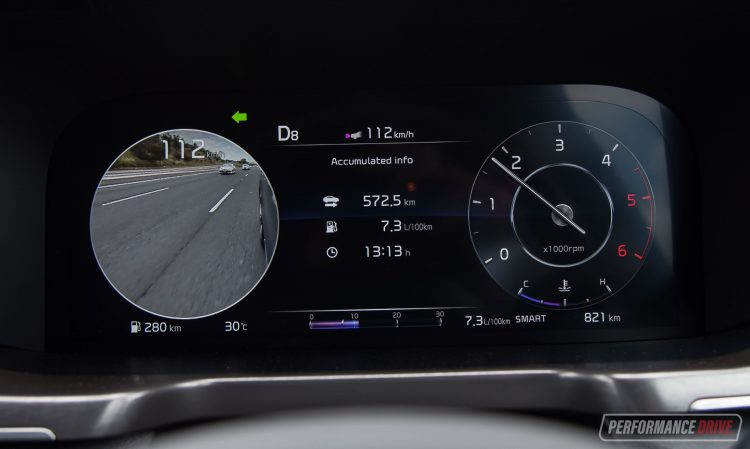 Obviously, the second row seat is fully adjustable and slides forward and back. This is completely expected of a modern Kia – after all, it is exactly the sort of stuff the brand is renowned for. However, take a closer look and you’ll find USB ports discreetly nestled into the backs of the front seats, and there’s another power outlet duo down on the console. Climate vents are of course presented, and the doors feature not just a bottle holder but also a cleverly integrated cup holder. 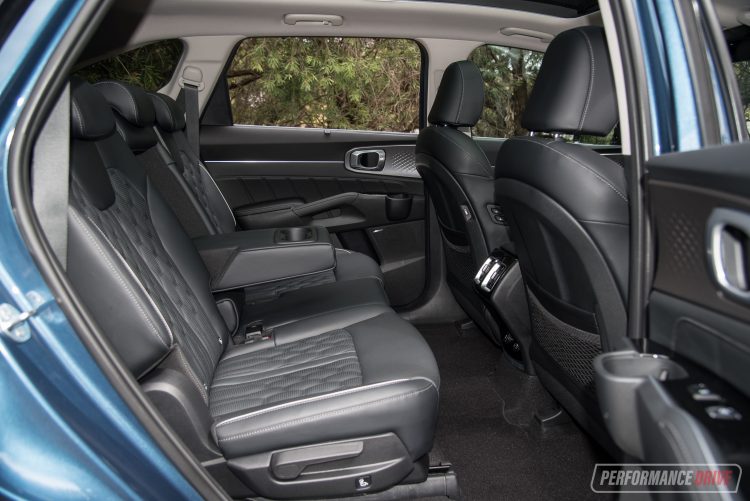 Turning your attention to the third row, and yep, more cup holders, climate venting and fan speed control, and more charging ports. No family could possibly be in need of a more accommodating in-car environment. Legroom is a little restricted in the third row, as is the norm for this class, but it’s certainly up there with the best of them. Again, you can slide the second row forward for some additional space if needed.

Boot space has grown significantly over the predecessor. This now presents 187 litres with all seats up, and up to 2011L with the two rear rows down. That easily defeats the old model which offered 142L and 1662L, respectively. A 2000kg braked towing capacity remains unchanged for both the petrol and diesel models, but the maximum towball download is now 200kg, up from just 100kg. 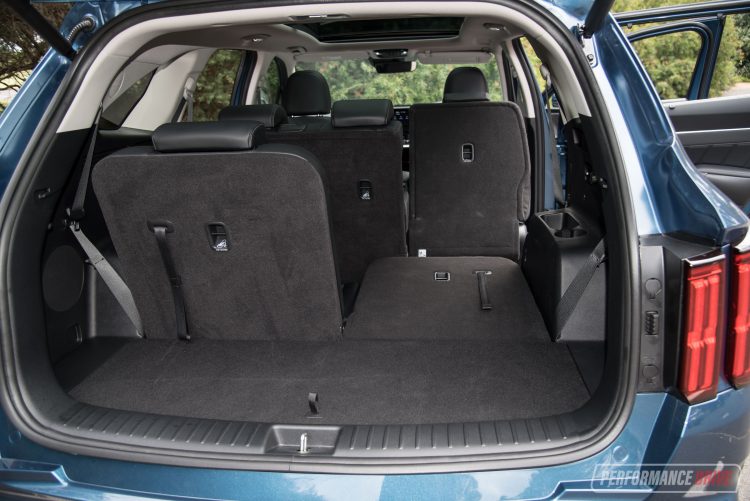 This really is an all-new model. Underneath you’ll find a substantially updated platform which supports hybrid powertrains, just like the new Hyundai Santa Fe. Overseas, the new Sorento is offered with a 1.6-litre turbo-petrol hybrid that develops 169kW. This unit is expected to arrive in Australian showrooms in the future. Even so, the platform has helped garner a number of big improvements in handling, chassis rigidity, safety, and driving engagement as well.

According to the specs, the layout has provided some weight loss benefits too. This trim level has a tare weight of 1908kg, whereas the previous diesel GT-Line was stamped at 1985kg tare. Some of this is due to a smaller fuel tank in the new model, dropping from 71L for the diesel to 67L. Nonetheless, it does feel much lighter on the road than you might expect. 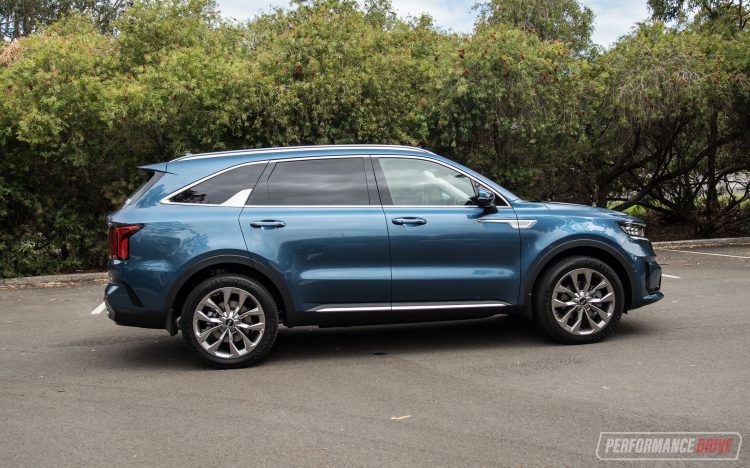 The suspension is nice and tensioned so you can actually chuck it around and have a bit of a play. This sporty three-spoke steering wheel helps get you in the mood as well. And we know, this type of vehicle is not designed for this kind of sporty driving, but we can’t help but praise Kia for offering something that can be quite fun to drive in this humdrum segment.

As usual with Hyundai Motor Group products, the new Sorento saw some development time out on the Nurburgring in Germany. That’s pretty much the gold standard when it comes to European quality control and refinement. Mid-corner bumps do not send ricochets through the body and cabin, and the suspension takes hard impacts with utter confidence and composure. If there is one minor setback, it’s that the ride might not be as comfortable in normal conditions as the old model. We love it, though. 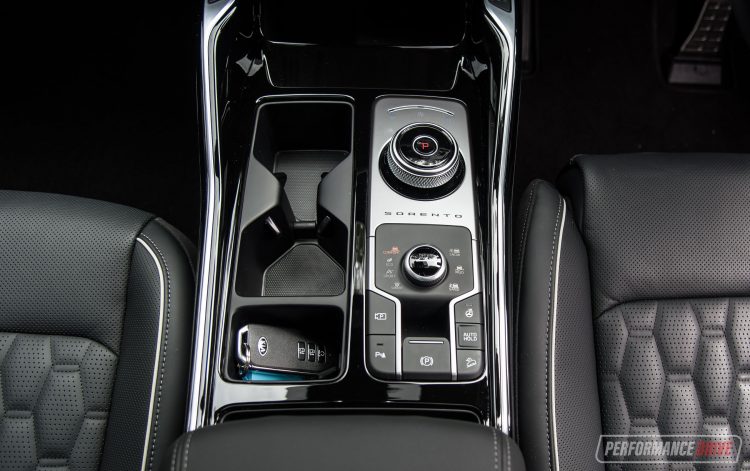 In terms of this new diesel engine, it produces 1kW more but 1Nm less than before. That doesn’t matter at all in the real world. According to our Vbox tests, the 0-100km/h dash is done and dusted in just 8.54 seconds. That’s a decent lick quicker than what we last achieved in the previous model; 9.76 seconds. We put a lot of this down to the new eight-speed dual-clutch transmission. It changes gear extremely quickly when it needs to, but it’s also smooth and friendly on lighter throttle demands.

Not only does the new powertrain provide improved performance out on the road, the official average fuel consumption drops from 7.2L/100km to just 6.1L/100km. That’s quite an impressive jump, and a super-impressive figure for a large SUV. In the real world we averaged 7.2L/100km, which included a mix of highway driving and performance testing. Although the fuel tank is smaller, as mentioned, the theoretical average range is 1098km compared with 986km in the old model. 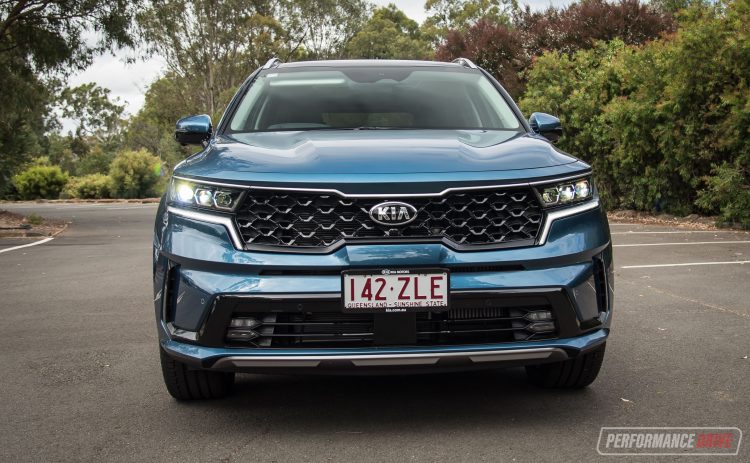 This is a fantastic seven-seat SUV. It goes straight to the top of our highest recommendations list. We love the design, the sophisticated yet extremely practical interior, and the performance and economy of the new powertrain. As a genuine bonus – not at all expected for this style of vehicle – the handling and potential driving enjoyment that can be experienced is remarkable.

All in all it’s a thoroughly thought out and well executed refresh, fitting exactly with the demands on what has become the Australian family vehicle archetype.

CONS:
– Ride might be too firm for some
– $5k more expensive than predecessor