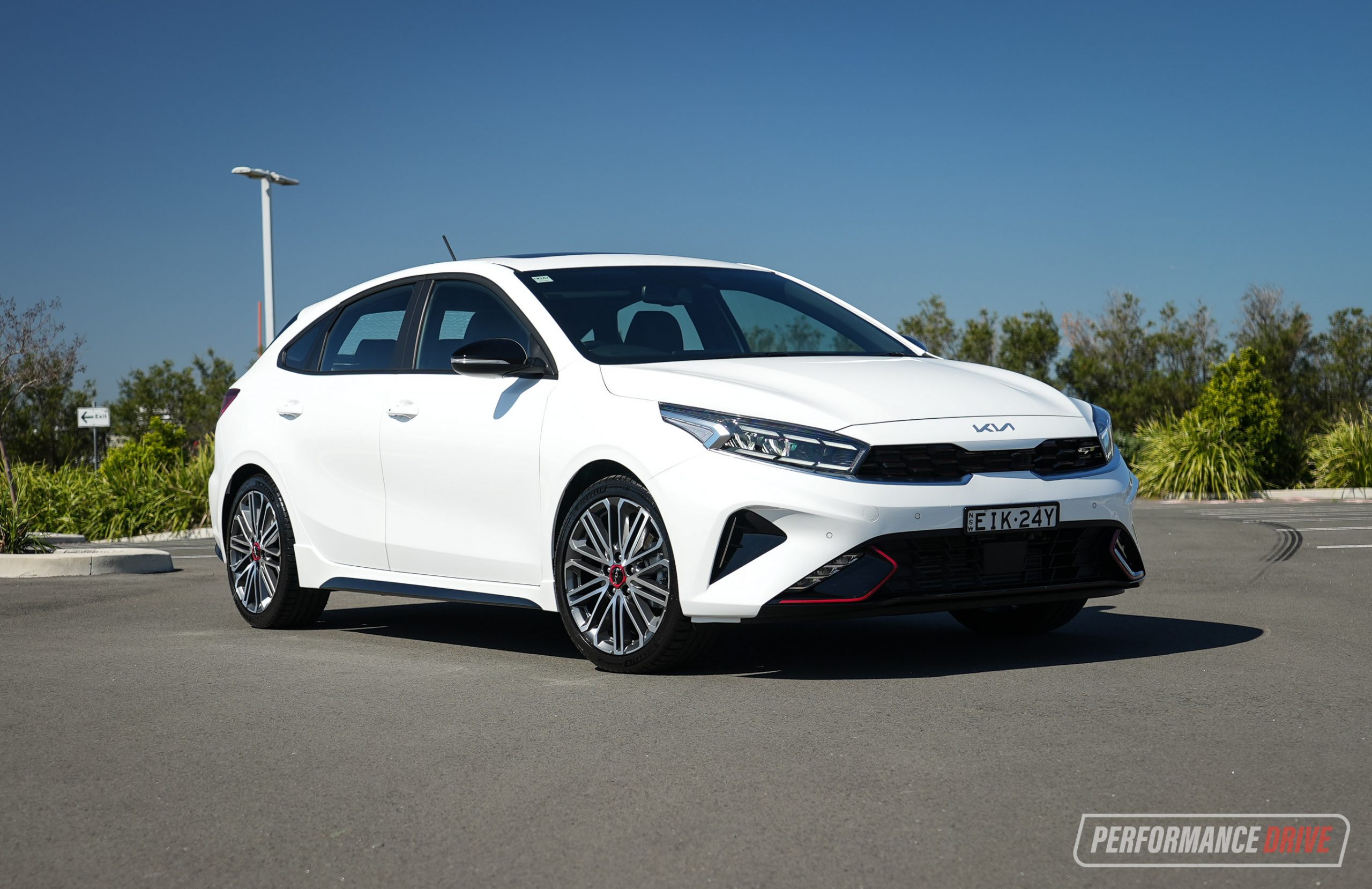 Even though the 2022 Kia Cerato GT does not offer the full ‘guns-blazing’ of something like a Hyundai i30 N hot hatch, there is still plenty to like about this tamed option. 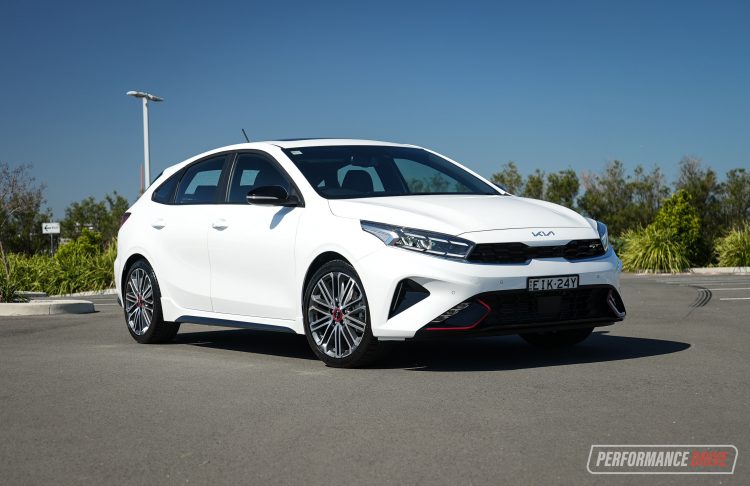 The humble small sedan and hatch are a dying breed Down Under, as car buyers flock to SUVs in masses. But the Cerato has been one of many models to turn the South-Korean carmaker into a success story in the last few years. In fact, 2021 saw the Cerato become the most successful model from Kia. It has sold 155,000 examples since it hit our shores 10 years ago. The Cerato GT specifically is a brilliantly balanced small sedan and hatch that offers an athletic touch while maintaining realistic affordability and practicality.

Kias and the Cerato also have some of the longest feature lists for their price, and still come with one of the best warranties in Australia. Here, we’re giving the Cerato GT hatch a go. The current generation has been out since 2018, but the MY2022 update sees a minor design revision, more features, and a $1100 price hike. Prices start from $35,290 for our testing GT hatch auto (plus on-road costs) – same price at GT sedan.

Sadly, there are no manual transmission options to be seen above the Sport variant, and the GT is exclusively paired with a seven-speed dual-clutch auto gearbox. The GT also speaks more to our desires with a zippy 1.6-litre turbo four-cylinder engine that produces 150kW and 265Nm. 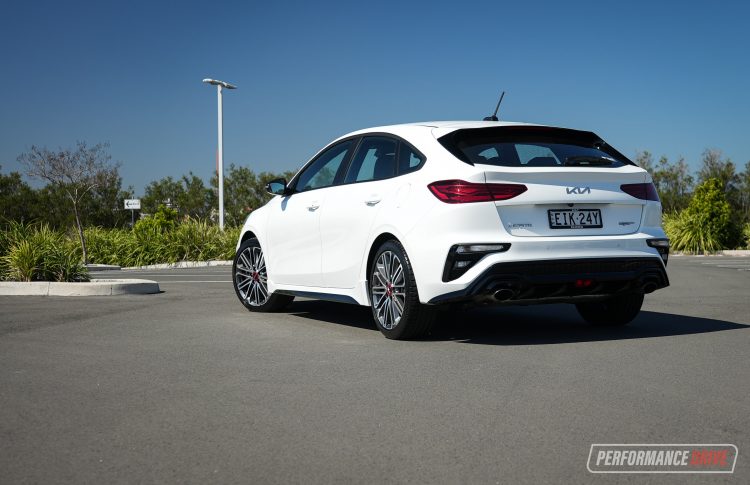 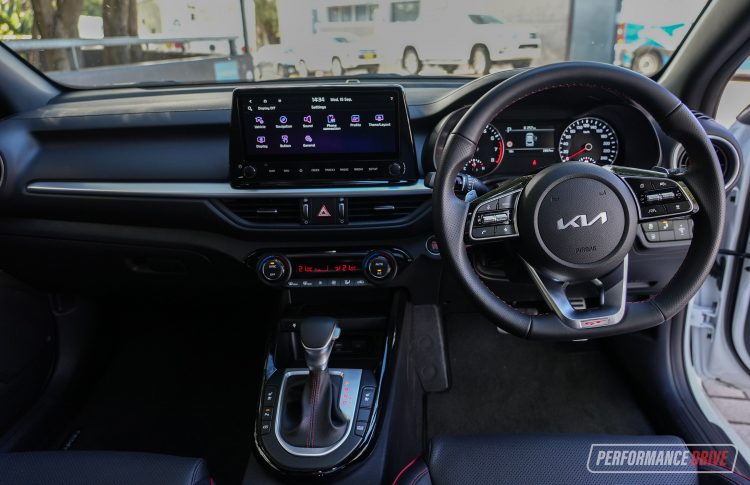 As you can see, there are a heap of features included as standard. But the trouble with having a parent company is the sibling rivalry that comes with it. The Hyundai i30 N Line comes with the same engine as the Cerato GT and is $3870 cheaper. Though, the i30 doesn’t have a sunroof as standard. The i30 N Line also still offers the option of a manual transmission, which brings the price down another $2000. 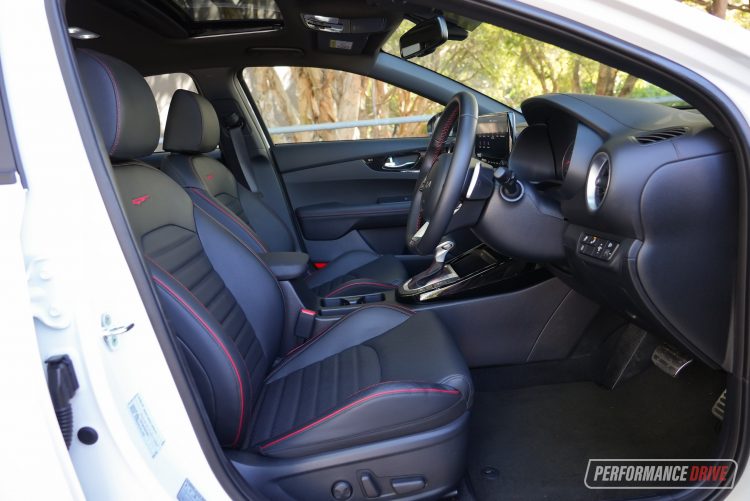 Design-wise, the Cerato now looks more in line with other newer Kia models. The front has a more prominent black grille that merges seamlessly with the headlights to make the car appear wider. The headlights have also been freshened to look sharper by replacing the four-prong look with wider dash-shaped LEDs. Only the sedan gets new LEDs at the rear – the hatch remains predominantly unchanged.

We think it still looks modern and athletic overall. It still has a few years left in it. High gloss black areas and a subtle body skirt continues to add that GT flair but doesn’t go so far to ruin a practical and respectable looking car, fit for visits to your in-laws. 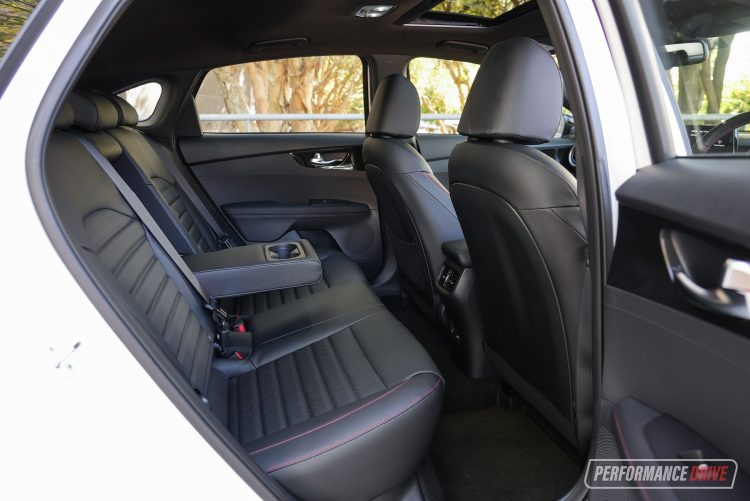 On the inside, the GT still looks up to date. Most importantly, it is also practical for a sporty hatch. Materials and the instrument panel look and feel good in quality. Especially the soft-touch buttons. The dash is clear and easy to pilot. Notably, the centre storage bin is large for a small car, and there is a handy two-tier shelf above the gear shifter. Also, the cup holders in the centre console and doors are big enough to fit a 1-litre bottle. Rear air vents are now standard in all models.

The front seats are heavily bolstered like bucket seats, so you feel secured in firmly. We have no complaints, but they might be uncomfortable to larger-framed bodies. Front and rear space is very commendable for a small car. The boot space of the hatch remains unchanged at 428 litres and offers larger opening access than the sedan. The hatch is also longer overall than the Hyundai i30 hatch, giving it 33 litres more boot space than the i30. The GT also uses a space-saver spare wheel like the Corolla, i30 and Mazda3. 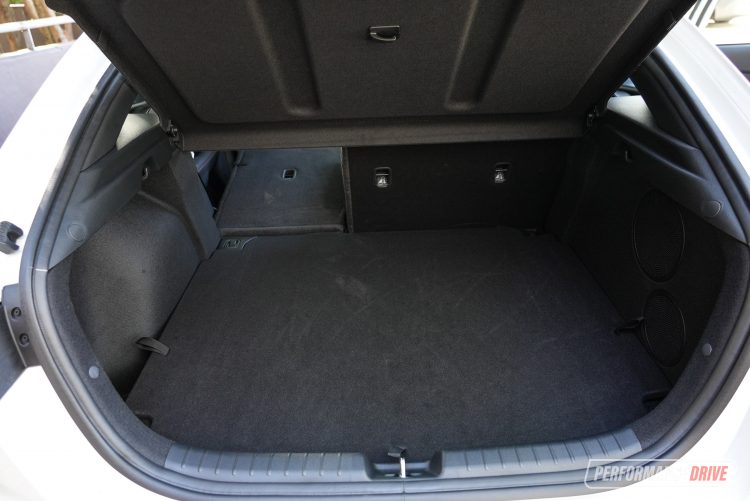 Compared to the 2.0-litre engine offered in the lower three variants, the GT’s 1.6-litre turbo engine is most definitely worth the higher price tag. It feels more willing and a lot more fun. You notice the quicker pick-up at low revs, and unlike the standard engine, it sounds happy to be played with higher in the rev range. Our testing revealed a very respectable 0-100km/h time of 6.71 seconds – almost proper hot hatch territory.

The seven-speed dual clutch auto makes it markedly faster to zoom through the ratios. But it takes a little getting used to. There is a slight delay on take-off when accelerating gently, comparing to a conventional auto gearbox. This trait is non-existent when driving spiritedly. The gearbox snaps to the job and punches through the gears quicker than a conventional gearbox. 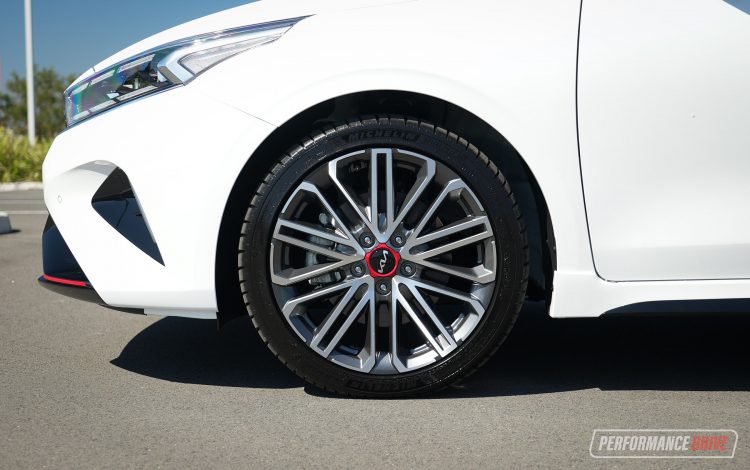 It’s not just in performance that you benefit from the GT engine either. During our test we averaged 6.9L/100km, which is very close to the official 6.8L/100km average. The naturally aspirated standard engine drinks more, at 7.4L/100km. Thankfully, the GT engine can still run on the lowest 91 RON fuel and E10 blended fuel. Not bad at all.

The GT continues with larger 305mm ventilated front disc brakes (compared to non-GT variants) and uses a more dynamic multi-link rear suspension. Though, it has been further tuned by Kia’s local engineers to improve ride comfort without losing its sporty handling. And this we noticed. It feels more compliant, tolerant over bumps, but hasn’t lost its flat and sturdy cornering skills. The balance between comfort and stiffness for cornering is right on par for a sports hatch. 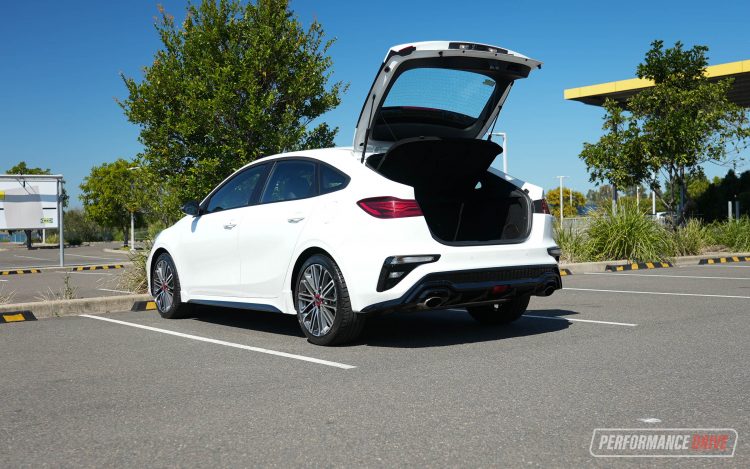 The Kia Cerato GT continues to be one of our favourite small cars for the price. You get a few additions to its already long list of features and safety tech with the MY2022 update. It is also one of the few that bothers to offer a brilliant alternative sporty engine compared with the rest of the range, and it is perfect for those who want some extra zing in their commute without turning too many heads or losing on practicality.

The MY2022 update also spices it up just enough to keep it stylish. If that is not enough to persuade you, Kia still offers a seven-year, unlimited kilometre warranty. Servicing intervals are required every 10,000km or 12 months.

PROS:
– Well-equipped for its price
– Interior is very practical and spacious, with large storage areas and cup holders
– Big boot for a small hatch
– Fun and zippy engine and gearbox dedicated to the GT
– Good balance in design between sporty and conservative

CONS:
– Space-saver spare wheel
– $1100 price increase over the previous model, and $3870 more than Hyundai i30 N Line
– Ride still might be too firm for some, despite revisions for 2022MY