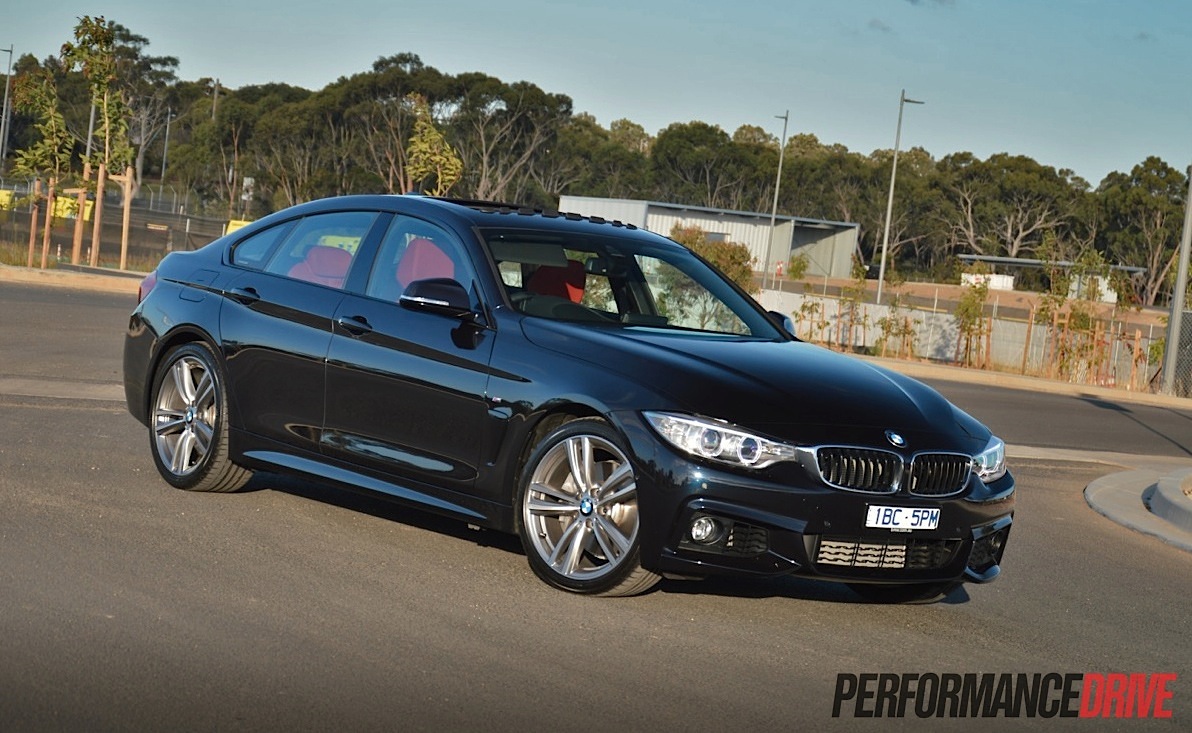 Instead of going for the two-door coupe 435i, buyers now have the option of the sexier Gran Coupe, which is BMW’s four-door coupe version of the 3 Series sedan. Confused? Let us explain. 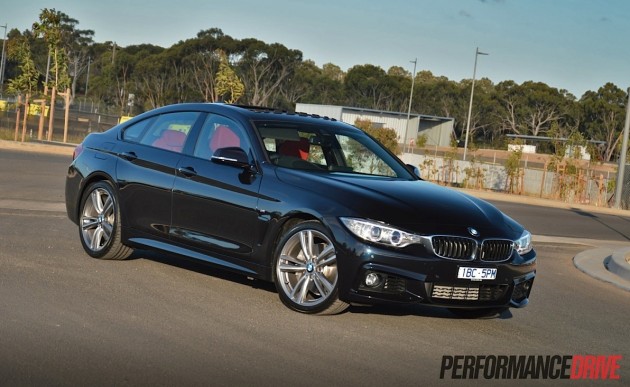 The BMW 3 Series is no longer available in a variety of body styles; you have the sedan and the wagon, and that’s it. However, the newly-introduced 4 Series badge is reserved for the two-door coupe and convertible variants, and this, the Gran Coupe which is a four-door coupe. So, in theory, you get the practicality of a sedan with the sportiness of a coupe.

Featuring the ’35i’ label on the back means it gets BMW’s sweet 3.0-litre turbocharged inline six engine producing 225kW and 400Nm. In Australia it comes with a ZF eight-speed automatic transmission as standard, with paddle shifters. All local variants are rear-wheel drive as well.

Being the flagship of all closed-roof 3-Series-based models (aside from M3 and M4), the 435i GC does come at a flagship price, kicking off from an eye-opening $109,000. If you’re unable to stretch that far but you can’t fight the attraction of the Gran Coupe, the local arm does offer the 420i Gran Coupe from $70,000. 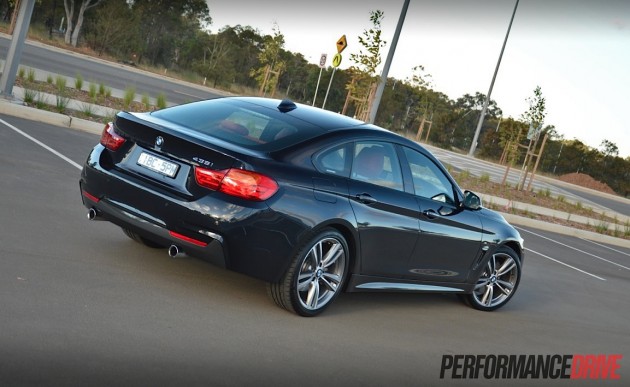 Once you’ve taken in the gorgeous exterior, you’ll soon want to meet the interior. At first it seems like a less practical version of the 3 Series sedan. The rear headroom is restricted due to the sleek roofline and it can be tough leaning down to get in. We drove the car with four adults and, to our surprises, there weren’t any major complaints.

Taller passengers do need to slouch down slightly to avoid head-butting the ceiling in the back, but it’s not as bad as it might look. The rear seat is very low which does provide some leeway. It works well for four adults we think, and it’s certainly useable as a family car with three kids in the back.

Up in the front it’s typical BMW luxury. Every panel and every fixture is precisely fixed to the car with a distinct Germanic quality. All materials are of premium nature and feel robust and well put-together, except for some surfaces around the gear shifter which seem like they could be scratched or stained easily.

Going for the top 435i gets you the full leather experience, with leather wrapping the dash, door trims, centre console and steering wheel. Contrasting stitching is a nice touch to highlight the ‘realness’ of the presence of leather, and as showcased on this test vehicle you can opt for a vibrant red hue (no cost for 435i).

Standard on all 4 Series GC variants is the top ‘Professional’ grade navigation system with an 8.8-inch screen and 20GB on-board media storage. This includes a rear-view camera and top view camera system for complete external awareness. 435i buyers benefit from a high-end harman/kardon stereo with 16 speakers and a 600-Watt digital amplifier. It sounds good but not as good as the specifications suggest, in our opinion.

Another perk of going for the 435i is the standard fitment of the full M Sport package. This otherwise optional kit includes an entire suite of M-style highlights and mechanical features to enhance overall performance and sportiness. Aside from the subtle bodykit, including a bespoke front apron, rear bumper bar and black side gills, the driver also gets adaptive suspension with multiple settings to play with. Blue-painted four-piston front and twin-piston rear M Sport brakes are a $1400 option (not fitted here).

As mentioned, the Gran Coupe aims to provide the practicality of a sedan compared with the two-door coupe. There’s no boot lid like with the sedan, but there is a huge hatch which rises up – electronically of course – to expose 480 litres of cargo space. The volume can be expanded to 1300 litres by folding down the 40:20:40 rear seats. It’s very practical, even compared with the sedan which offers the single 480-litre capacity. 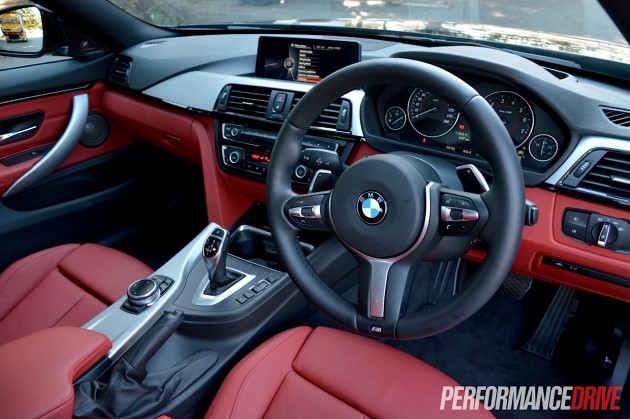 If you want to know what the definition of a driver’s car is, a good place to start is to take a BMW for a drive. From the moment you sit in the 435i, with its perfect driving position and sporty three-spoke steering wheel at your chest waiting to be grasped, you just know you are going to enjoy your journey.

The latest 3.0-litre single turbo N55 engine is one of the nicest six-cylinder units on the market. And that’s not just our opinion. The motor is derived from the N54 twin-turbo straight six (same 225kW/400Nm output) that won the International Engine of the Year award five times in a row. It burbles and hisses on startup, with a reassuring bass that you only get from a straight six. Being a straight six also means it is wonderfully balanced and smooth, like a premium Polish vodka. Like vodka, it has a tangy kick to it too.

Acceleration off the mark is urgent and then relentless. It just keeps screaming and pulling you closer and closer to the horizon. You can easily hit and exceed the speed limit without even meaning to. We timed 0-100km/h in 5.7 seconds, which is quite off the manufacturer’s 5.2-second claim. Overtaking performance is where it really shines though. On a private road we timed 0-200km/h in 19.5 seconds, with 60-120km/h coming up in 4.7 seconds and 120-180km/h coming up in 7.8 seconds. This gives you an idea of its long-legged surging ability.

One of the great things about the engine is the way it delivers its output. Maximum torque is available from just 1200rpm (just off idle) and it holds all the way until 5000rpm. Maximum power then comes in from 5800rpm and stays until 6400rpm. The versatility and subsequent response is incredible, especially considering this is not a dedicated performance motor.

You can indulge in high revs, bouncing off the 7000rpm limiter if you like, and it’ll sing and soar with pure delight. You can also work the excellent eight-speed auto and upshift early to capatilise on the torque. Think of this engine as like a cross between a torquey turbo-diesel and an old-school, naturally aspirated high-revving screamer. It’s no wonder it is literally an award-winning unit.

Fuel economy isn’t bad either. We averaged around 10.1L/100km during our week, with mostly heavy-footed driving. The official government-regulated combined cycle rate is just 7.5L/100km. We’re not sure if anyone could actually achieve that in the real world but we have no doubt you could get it as low as 8.0-8.5L/100km.

BMW’s natural habitat is in the corners, so it’s no surprise the 435i GC is pretty much flawless in that regard. Managing the pin-sharp steering is actually one of the most fun aspects of this car. It feels light and responsive, partly thanks to its relatively low 1585kg kerb weight. You’ve probably heard experts describe BMW steering as organic or like an extension of your arms and hands; there really isn’t any other way to describe it. It feels alive and passionate, and it conveys all information directly through to your hands.

In terms of handling and grip, the 435i corners better with a bit of throttle. If you come hot into a corner and roll off the brake and tip it in, it will gently start to understeer. Apply light throttle though and the outfit will rip around with high g-force. Switch the traction control off and you’ll engage the electronic locking differential, in which case sideways shenanigans are totally doable. We tried a donut in a private carpark to put the differential under real pressure and it spun around like a ballerina – beautiful.

Under braking the 435i performs with confidence and composure, even at high speed. Pedal feel is ideal and you can easily modulate pressure with mild sensitivity. There’s four-piston brakes up front as standard (single-piston rear), however, they did overheat a bit on our test vehicle during our usual fast-paced mountain road test. We’d suggest opting for the $1400 M Sport items if you engage in spirited or track driving on a regular basis. 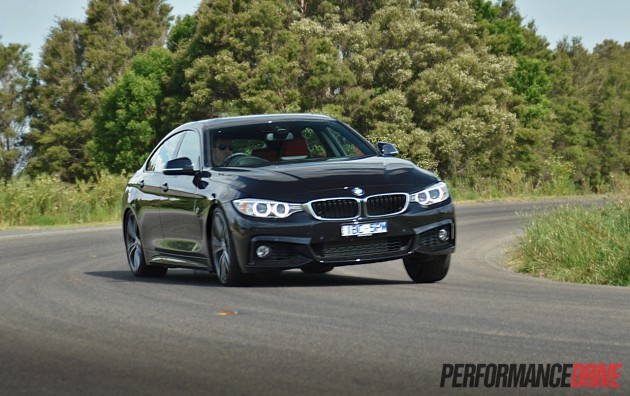 The ‘ultimate driving machine’ phrase might be a marketing pitch, but in this case it’s totally warranted. Whether it’s smoothly along the highway, pacing out on the freeway, or galloping through a country road with some tight bends, this car loves to drive. Every element works in harmony and strives for the same outcome. Its only main drawback is the price.

Unfortunately, Australian buyers continue to battle high new car prices compared with some international markets. For example, the 435i Gran Coupe is priced from US$46,725 in North America, which roughly converts to just AU$57,500 – almost half the Australian $109,000 list price. There are of course a number of variables and governmental influences that push local prices high, but it would be great if cars like these were more accessible to more of the population. On a side note, the virtually identical 335i sedan starts at $93,430. 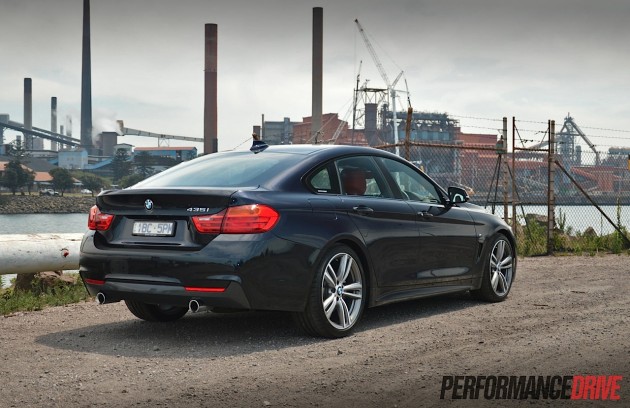