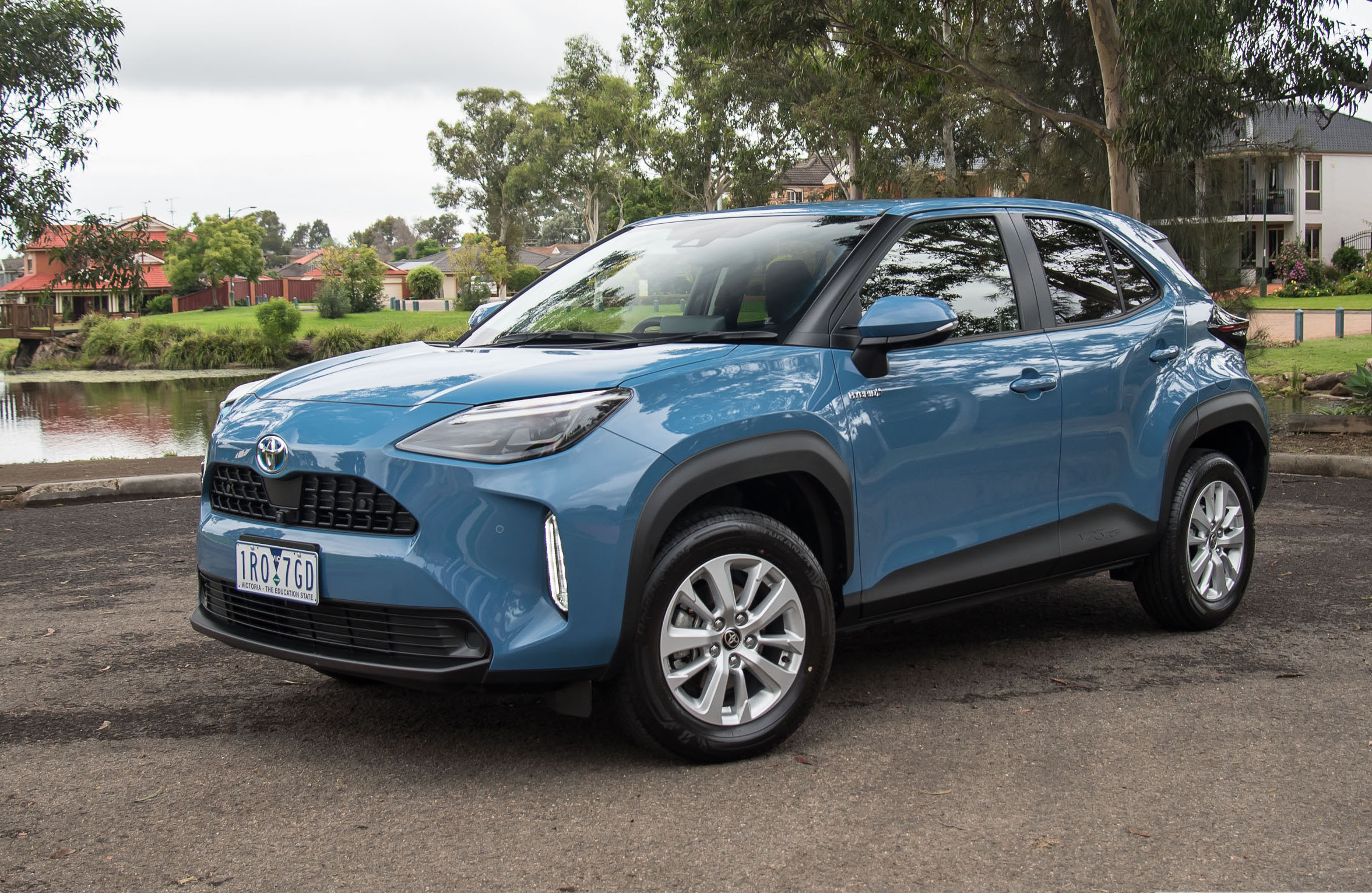 Toyota has put its best foot forward with the all-new 2021 Yaris Cross, feeding increasing consumer demand for compact SUVs. The new model becomes the smallest of a seven-strong SUV fleet from the Japanese brand, competing against the likes of the Hyundai Venue, Kia Stonic, and Mazda CX-3. 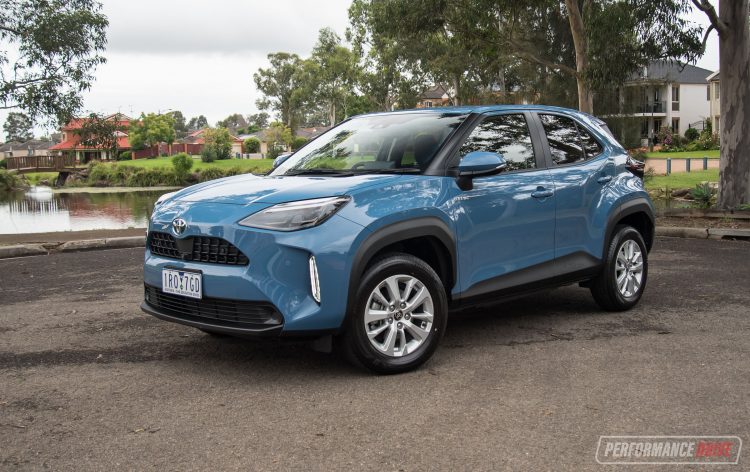 Even though it uses the Yaris nameplate, it looks quite different, is more spacious, and is higher off the ground. Buyers have a world of options to choose from. You can get it in front-wheel drive, all-wheel drive, petrol and hybrid. All of which use a 1.5-litre three-cylinder petrol engine. The hybrid adds a pair of motor generators, and the all-wheel drive hybrid adds a third electric motor to power the rear wheels. 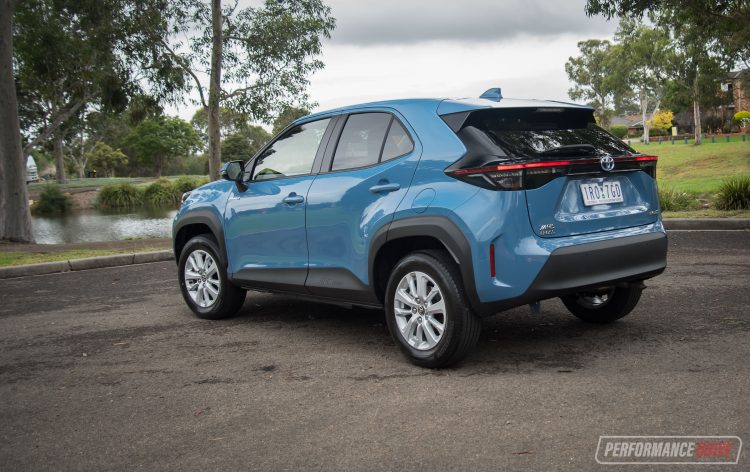 It shares the same ‘GA-B’ Toyota New Global Architecture (TNGA) platform as its hatch twin, but the Yaris Cross has been stretched 10mm in the wheelbase, with a 35-45mm wider track, and 20mm of extra ground clearance. There are also some external design changes too, like the cute front end made up of a significantly smaller upper and lower grille, and playful-looking headlights.

The side profile takes a leaf out of the RAV4’s design with the squarer wheel arches and plastic surrounds to give off a rugged vibe. The rear is where it resembles the Yaris hatch the most, dominated by the dark full-width taillight unit. Overall, we think it looks fresh, fun, chirpy and ready to spring into an adventure. 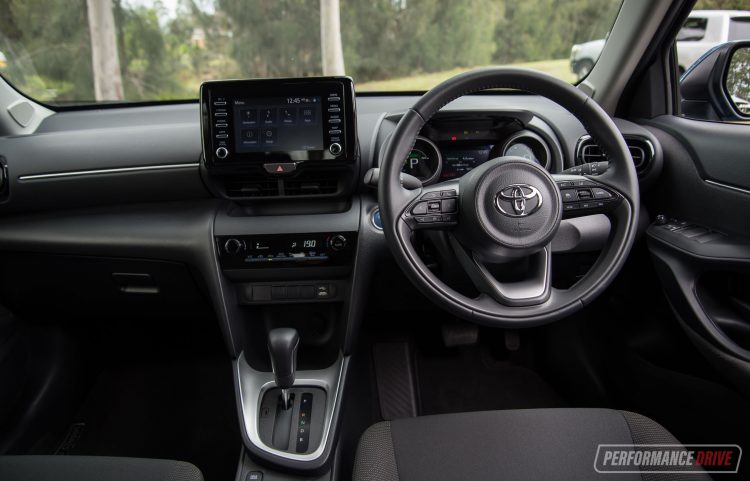 The interior design is also just as funky as the exterior, as well as practical and simple to use – in typical Toyota fashion. There seems to be a minimalistic approach used, as there are not many buttons or large clusters to stare at. In the dash, two small circles are used to display your gear selection and your speed, in digital form, and a small info panel between them. There is no typical speedometer or tachometer in a gauge format.

You get an average-sized 7.0-inch multimedia touch-screen with separate side buttons and volume knob, and air-con controls are separated out on a lower panel. Interior materials feel hard-wearing but not so elegant. Areas of hard plastics, rather boring colours and seat fabrics are adopted. At least on this GXL trim level. 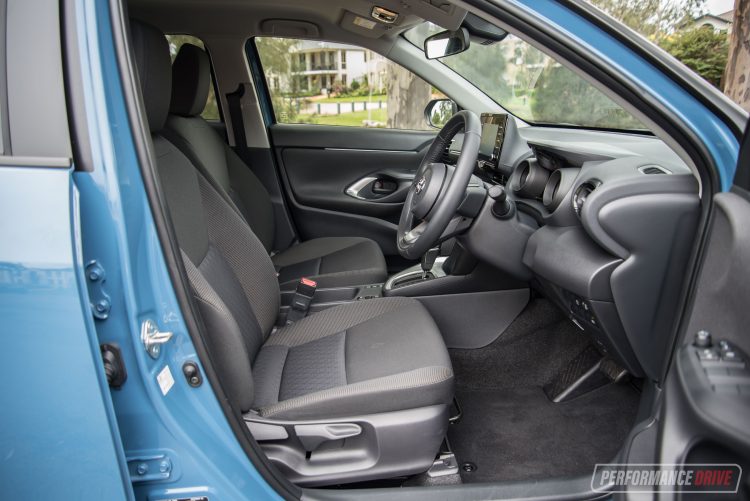 Space-wise, the interior is surprisingly roomy for the smallest SUV of a fleet of seven. There is a commendable amount of room in the front row, and decent head clearance on entry/exit. It helps that everything is made small to make the space seem bigger; like the small steering wheel, small dash, no centre console box, and small-framed seats.

Impressively, the front doors fit 1.5-litre bottles, and 600ml bottles in the rear doors. In the rear, legroom is decent enough for trips with four average-height adults. You notice the extra depth in the floor as your knees sit lower than in the Yaris hatch. The seats could do with a little more shape and lumbar support, though. Headroom is also noticeably increased compared with the hatch. 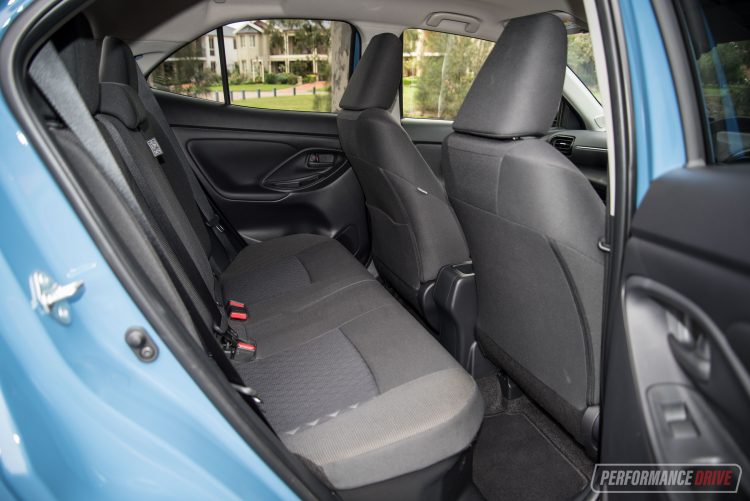 Further back, the boot is a versatile space. It’s easy to access with a wide opening. 2WD models have a deck board that hovers above the boot floor to make items easier to reach; and to create extra deep areas on the sides behind the wheel arches so that items don’t roll around. Usable boot volume is 390 litres, or 314L in AWD form. At 390L, it is one of the largest volumes in the class, in front of the Mazda CX-3’s 264L, the Hyundai Venue’s 355L, and the Kia Stonic‘s 352L. The Nissan Juke and Ford Puma, in this same segment, offer slightly more, at 422L and 410L. 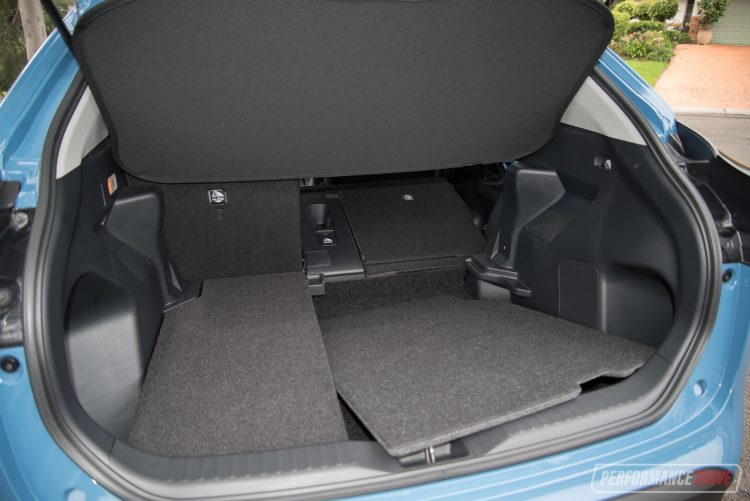 If you spend more to get the GXL, you receive blind-spot sensors, reverse collision mitigation (which is a first for a vehicle at this price range), front and rear parking sensors, sat-nav, LED headlamps, and rear window privacy glass.

The Yaris Cross is sold with a five year/unlimited kilometre warranty, seven years on the engine and drivetrain, and ten years on the hybrid battery. Services are required every 15,000km or 12 months. You can purchase a “Toyota Warranty Advantage” program, where the servicing price is capped for the first five services at $205 each. 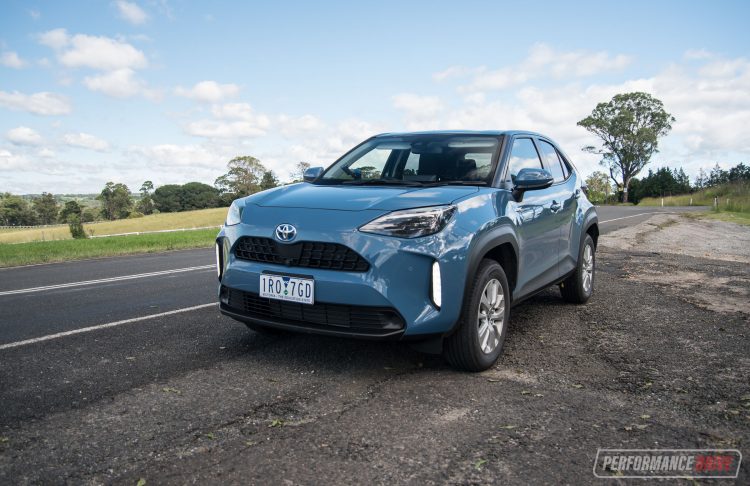 We tested this 1.5-litre hybrid engine in the Yaris hatch not that long ago, and we remember being surprised but its torque. Fortunately, it goes just as well in the Yaris Cross. It’s totally uncomplicated, and you don’t have to do anything different to what you would normally do in an all-petrol car. And compared to the previous generation four-cylinder Yaris engines, this drivetrain is worlds apart. A combined power output of 85kW doesn’t sound like much on paper, but it feels livelier, more enthusiastic and less breathless than the old unit. It feels like it gets up to speed without needing to try as hard. And it tends to eat up hills more competently thanks to the extra torque from electric system.

If you feel the temptation to push it to it’s limits like we often do, there is not much difference made to the rate of increase in speed, as it already acts with a lightness in its step when driving in a civilised fashion. We clocked 0-100km/h in 10.55 seconds, which is just shy of what we saw in the slightly lighter Yaris hatch with the same setup (10.32). We think this combo is brilliant, especially when you consider its fuel consumption. 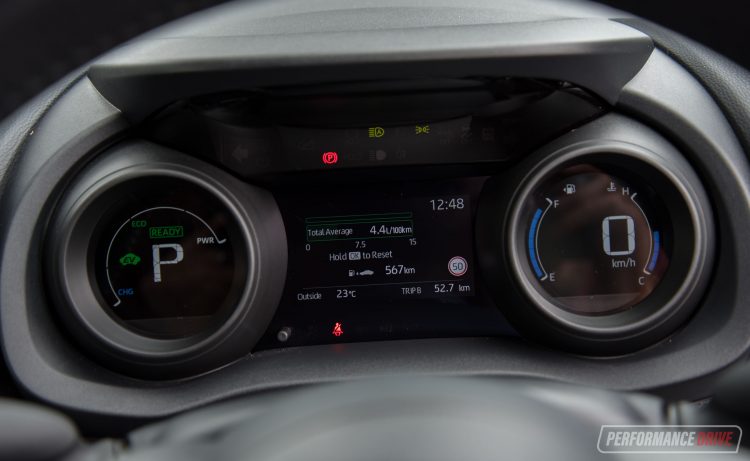 The business case for purchasing the hybrid version is strong. For a $2000 premium over the all-petrol GXL, you are looking at a frugal fuel consumption of just 3.8L/100km. Though, you should consider what sort of driving you will be doing mostly. Around the city, we were easily able to achieve the official figure. But when we took the Yaris Cross to the highway, fuel consumption climbed to 5.3L/100km. It’s still a decent figure, but the electric side cannot be used much at higher speeds.

Constant braking in the city charges the battery; in turn, allowing more electric power to be utilised. When the battery is well charged, it is common for 100 per cent battery power from a standstill to about 40km/h, depending on how heavy-footed you are. Our average consumption over a week of mixed conditions was 4.9L/100km, but our driving patterns were biased towards highway speeds.

Of course, there is more to hybrid vehicles than fuel consumption. The CO2 emission average drops from 124g/km to just 86g/km. And the other advantage is that filling up the tiny 36-litre petrol tank with E10-rated fuel at $1.30 per litre, you can travel almost 1000km at the cost of about $46 on one tankful. 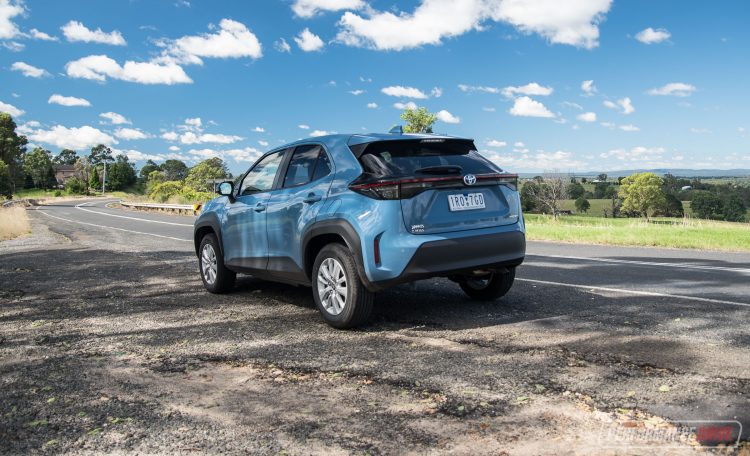 The steering is light to give an effortless and peppy feel. The track is wider than the Yaris hatch, so it feels more stable and balanced in the lanes at highway speeds. Thanks to slightly more suspension travel, we think the Yaris Cross does even better at absorbing big bumps and holes in the road. Surprisingly, this hasn’t compromised on a sporty feel around corners. In fact, it takes on corners with considerable zip and poise. You also get more grip from the tyres due to a wider tread, too.

We are not fans of CVT auto transmissions. But in this application, where economy is key, it makes sense. This auto is one of the better feeling CVTs because it does not cause the engine to sound breathless or droned out. It seems to slice up the torque from the engine/electric motor really well, and spread it evenly. It actually pulls quite strongly at low revs.

Over the last few years Toyota hybrid vehicles have been very successful in planting themselves as a stablemate in the automotive landscape. And going off the Yaris Cross, they get better and more justifiable as time goes on. This 2WD hybrid is an extremely easy vehicle to drive. You’re no longer driving an experiment, and you don’t need any extra training to operate one. You just get in it, drive, and start enjoying the cost benefits. And the great thing is, the GXL hybrid is only $2000 more expensive than the all-petrol GXL.

For the Yaris Cross as a whole, it is a brilliant little SUV that makes good use of the available space inside, it looks fun and modern, and feels the same to drive. We think its price is justified when you consider the loads of safety tech, features and low running costs. But what happens now if we want to buy a car for less than 20k? It seems like 30 is the new 20.

CONS:
– Highway travels sees the fuel consumption rise
– Can get pretty expensive for this segment
– Lots of hard plastics inside