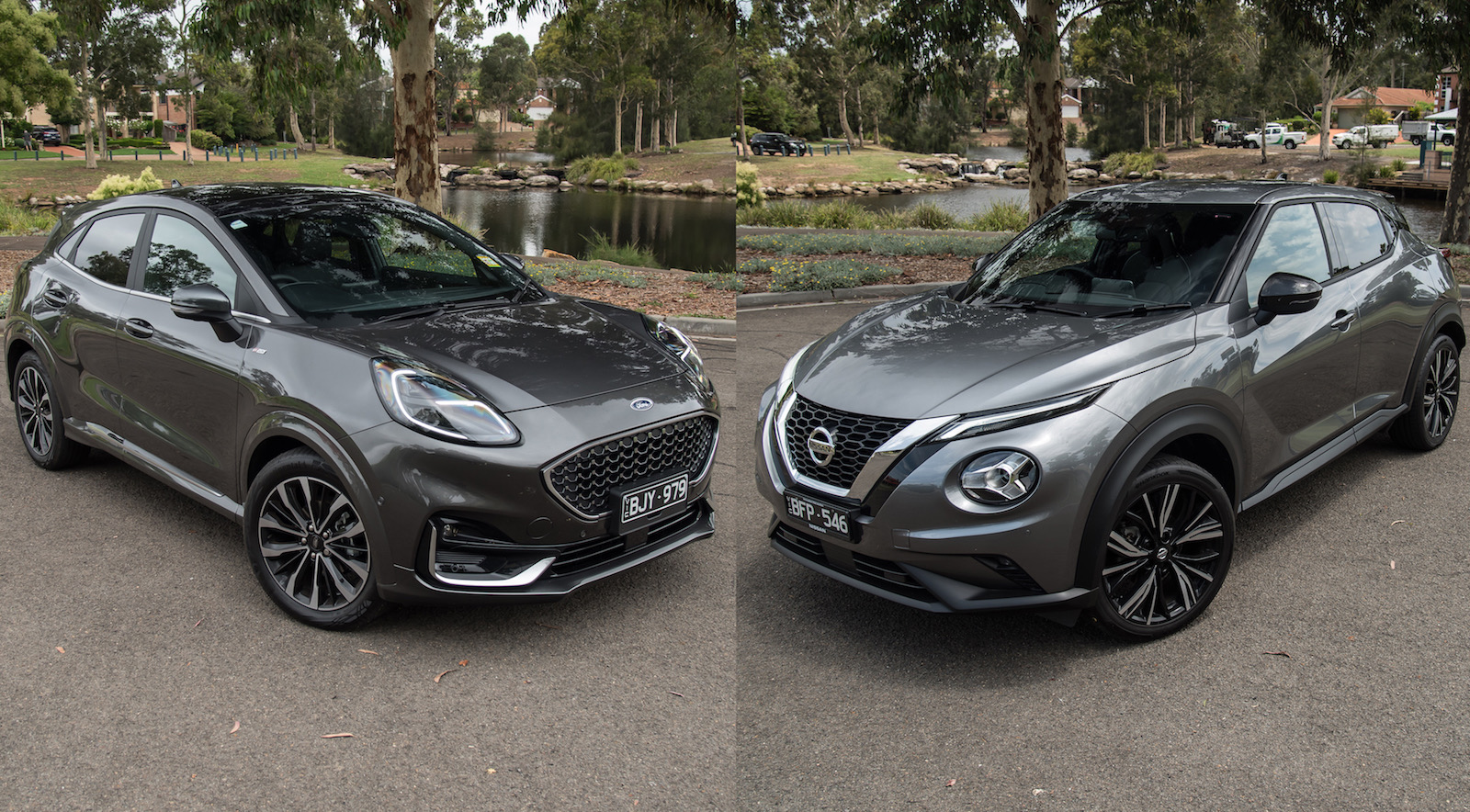 It’s easy to become overwhelmed if you’re on the prowl for a new small SUV in today’s market. So much so that VFACTS recently had to create a new market segment that slots below the ‘small SUV’ category, introducing the ‘light SUV’ category. And the newest models to this segment are the trendy Ford Puma – an entirely new model for Australia – and the quirky Nissan Juke. 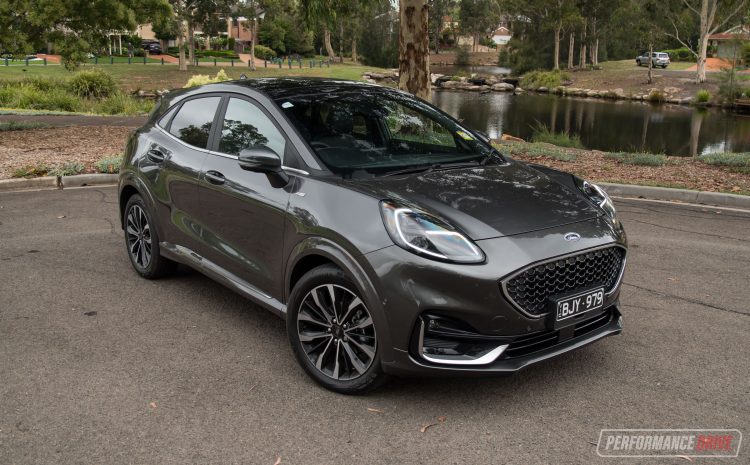 Here, we’re taking the top-spec of both models and putting them side-by-side to help you decide what’s right for you. Both are available with just the one engine that happen to be exactly the same configuration. They go with a 1.0-litre turbo-petrol three-cylinder. This layout is seemingly becoming more popular as manufacturers look to reduce fuel consumption and emissions. They both also come in seven-speed dual-clutch auto and front-wheel drive configuration only. 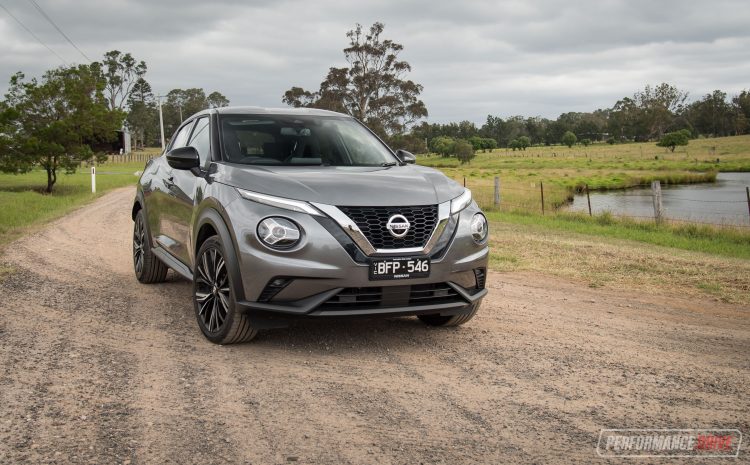 The Ford Puma is an all-new design for Aussie car buyers. It looks slick and smooth, with flowy and rounded shapes that look Jaguar-esque at the front. At the rear, we see a high waistline and sculpted LED taillights that look brilliant. The Nissan Juke possesses a more unique and charismatic design that we recognise from the previous generation, only sharper. The high-positioned headlights on the bonnet have been eased slightly, and the large, round lower lights remain.

Design elements are sharper than the Puma, like the prominent V-shaped grille and surrounding chrome, and the chiselled taillights that protrude out from the body. Design is always a subjective thing, but here, both cars have a design that is quite unique. 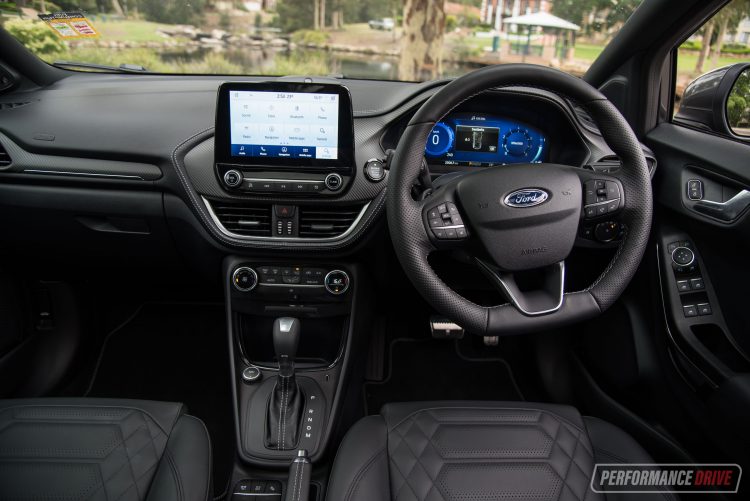 Turning to the inside, the available space is surprisingly decent for the class. Both the Puma and Juke have plenty of room to adjust up front. And thanks to a higher roof than regular hatches and extra height from the ground, they are both effortless to climb in and out of. If you need to carry more than two passengers, the rear seat in both cars might start to feel a little squashed on longer trips, especially for tall adults. But it’s more than adequate for kids.

The presentation of the interior in the blue oval feels slightly more premium than the Juke. Materials feel higher in quality, and the overall design is more conservative and professional looking. We admire the soft blue backlight glow and the elegant feel of the layout. The Juke adopts a quirkier, circular theme inside, and there is lots of soft Alcantara placed throughout for a sportier feel. Both models are equipped with partially leather seats.

Right down to the basics, the UK-built Juke feels rougher and inferior compared to the Romanian-built Puma. For example, closing the doors in the Juke occurs with a rough and unrefined clank, while the Ford doors seem to shut with a better-absorbed impact. 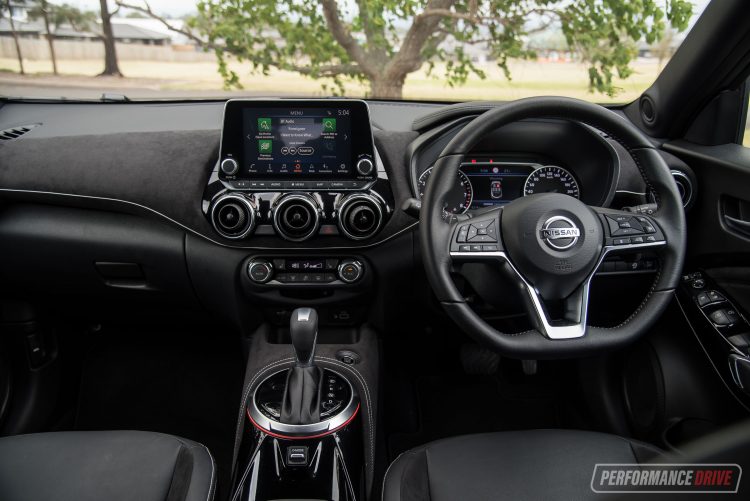 Weekly shopping trips and the odd weekend getaway are possible with a modest boot space in both models. The Juke offers slightly more space than the Puma, with 422 litres versus 410 litres (or 456L including under-floor storage). When the rear seats are folded down, the Puma provides 1170L and the Juke increases to 1305L. We prefer the Ford boot as the rear seats fold completely flat, and there’s a 12V socket in the boot wall. The under-floor bucket is also a handy spot to throw dirty or wet items.

Both models are fitted with an 8.0-inch touch-screen featuring sat-nav, Android Auto and Apple CarPlay, and digital radio. Though, the Juke’s screen appears to be lower resolution and presents a blockier font. In the Puma, you get a brilliant 575-Watt 10-speaker Bang & Olufsen sound system. The Juke also offers a superb system, with eight speakers by Bose and what they call Ultra-Nearfield sound. Basically, there are speakers built into the front seat headrests, which give a clearer sound experience. 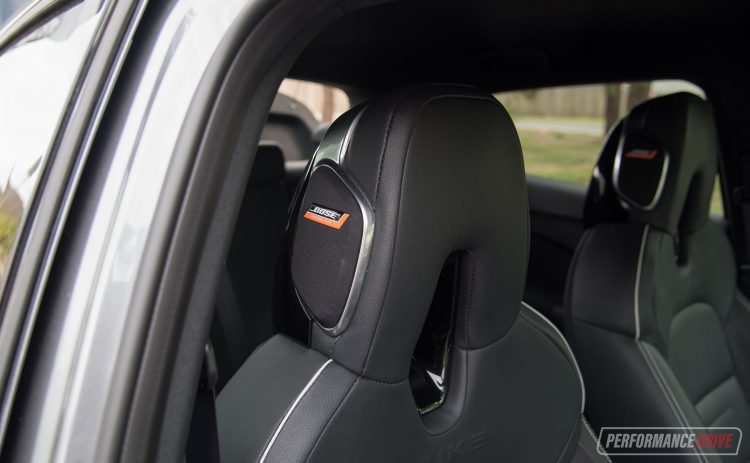 It’s a mixed result when it comes to the standard feature offering. There are some important omissions in both cars. The Nissan Juke misses out on wireless phone charging, active cornering headlights, a fully digital instrument cluster, and a powered tailgate (but who needs this when it’s a small and light tailgate?). Meanwhile, the Ford Puma lacks front- and side-view cameras, an electronic handbrake, front parking sensors, heated front seats, interior ceiling handles, 18-inch alloys compared with the Juke’s 19-inch alloys, and adaptive cruise control as standard (you need to pay extra for the Park Pack to get this – $1500). 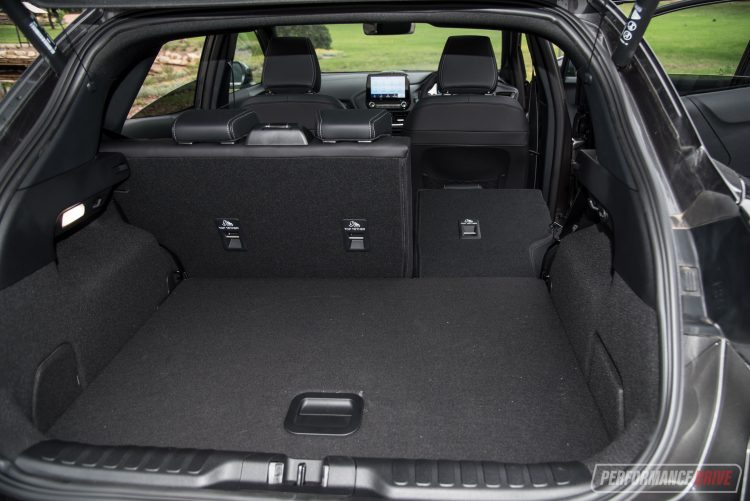 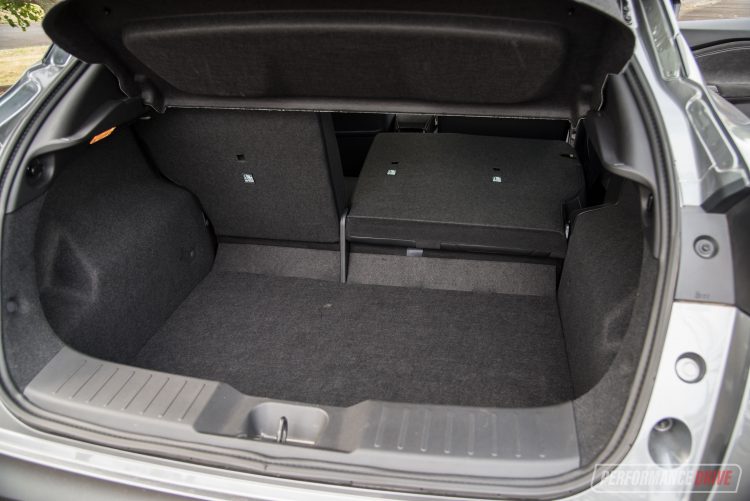 When it comes to engine performance, there’s not a lot between both engines, given they both go with a 1.0-litre three-cylinder. Nissan manages to extract 84kW of power and 180Nm of torque from the pint-sized engine. Ford steps it up to 92kW, but 10Nm less torque than the Juke. However, the delivery of power is worlds apart. The Juke exhibits a terribly jerky and unrefined acceleration behaviour with flat spots compared to its competitor. And the engine tends to idle rougher than the Puma’s. Peak torque in the Ford is also spread wide, between 1500-4500rpm, while the Juke’s max torque is achieved only at 2400rpm. This makes a noticeable difference in day-to-day conditions, particularly when zipping around the city.

The 0-100km/h sprint is achieved in 11.17 seconds in the Puma, and 11.35 seconds in the Juke, according to our best Racelogic Vbox results. Going up hills becomes a little thrashy with both the engines, but it’s not an entirely breathless task – they just need higher revs than what you might be used to. And luckily, they don’t feel strained or uncomfortable being high up there in the rev range. Normal take-off at the lights is not a stressed process either. It’s easy to keep up with the flow of traffic without the need for heavy right foot encouragement. 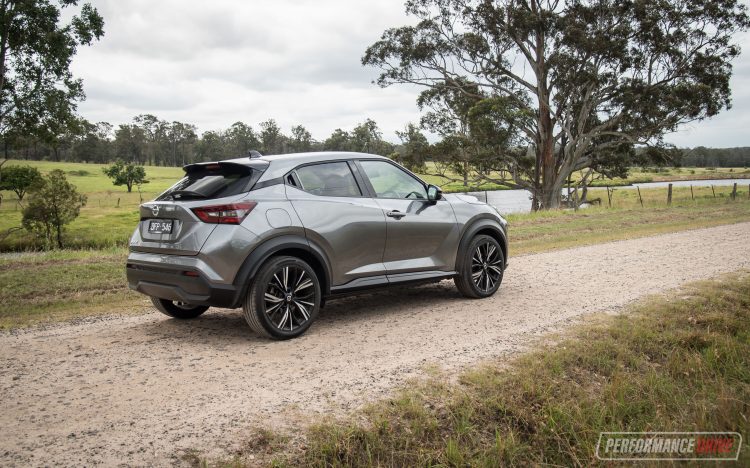 With shrinking engines, it would be reasonable to expect to see some decent benefits in fuel consumption and emissions. Officially, the Ford Puma burns 5.3L/100km on the average cycle. Our mixed driving of over 600km in the city and on freeways resulted in 6.5L/100km. That’s pretty decent, and makes all this shrinkage worthwhile.

However, the Nissan Juke trailed behind. Official figures rate it at 5.8L/100km, but our testing on similar routes and driving styles to the Puma resulted in 7.2L/100km. Average emissions are slightly lower in the Puma, with 121g/km versus 136g/km in the Juke. And it should be noted that the Puma requires a minimum of 91 RON petrol, with the Juke requiring the more expensive 95 RON at minimum. The Ford’s 42L fuel tank results in a theoretical range of 792km, and the Juke’s 46L tank translates to a 793km range (using the official average consumption ratings).

Thank goodness there are no CVT autos to be seen here. Both models are generous to offer a performance-minded dual-clutch auto. Although, these types of transmissions might catch some drivers off guard at first, as it’s trickier to inch forward in very slow conditions, such as in a tight carpark. But you do get used to it. 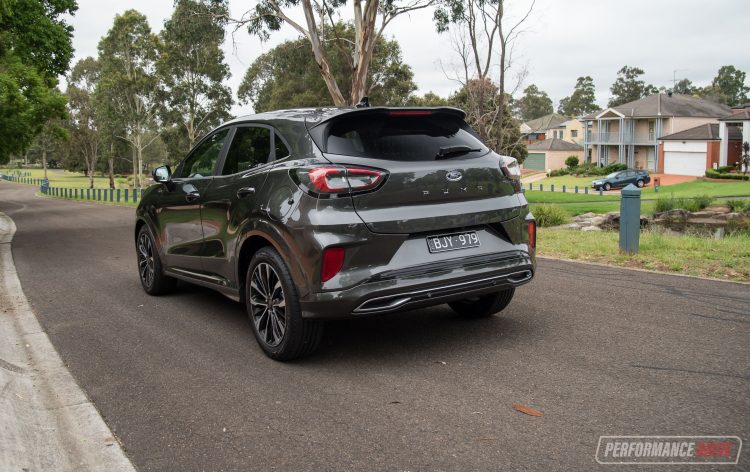 In terms of driving dynamics, thanks to their petite size, both the Ford Puma and Nissan Duke feel nimble and zippy to drive. Corners can be tackled with a sportier edge in the Puma as the ST-Line V scores a sports-tuned suspension upgrade. But it might be too stiff for some. The softer-riding Juke is still very playful but not quite as sharp in our opinion. That can be a good thing or a bad thing, depending on your priority. The Puma also seems to accept hard-hitting bumps better than the Juke. It is less disturbed and more composed by the nasties of Aussie roads. The Juke sometimes judders and skips over low-quality bitumen and dirt roads.

Both compact SUVs are not really designed for off-road purposes, except perhaps for the odd camping track or long rugged driveway on a family farm. For this, the Juke has a marginally higher ground clearance than the Puma, at 172mm compared with 164mm. Being only front-wheel drive, we did not venture further than a dirt road to test this area. 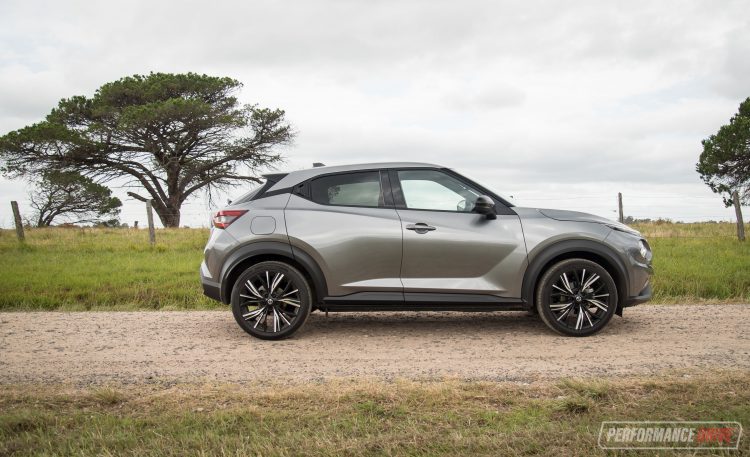 We won’t tell you which light SUV is better overall, as every driver will rate aspects of cars with different weightings. It really depends on what attributes of a car are most important to you. We can tell you that the Nissan Juke is cheaper than the Ford Puma in entry-level form.

But if slight cost variations are not an issue to you, we think the Puma looks and feels more premium than the Juke. It also has an ever-so-slightly better performing engine that accelerates smoother, and also doesn’t require 95 RON fuel. On the other hand, we think it’s an insult to have to pay extra on a top-spec model Puma for adaptive cruise control in today’s market.

Both manufacturers offer a generous five-year, unlimited kilometre warranty. And servicing intervals are required every 12 months, or 20,000km on the Juke, and 15,000km on the Puma.

What does the Ford Puma do better?

What does the Nissan Juke do better?