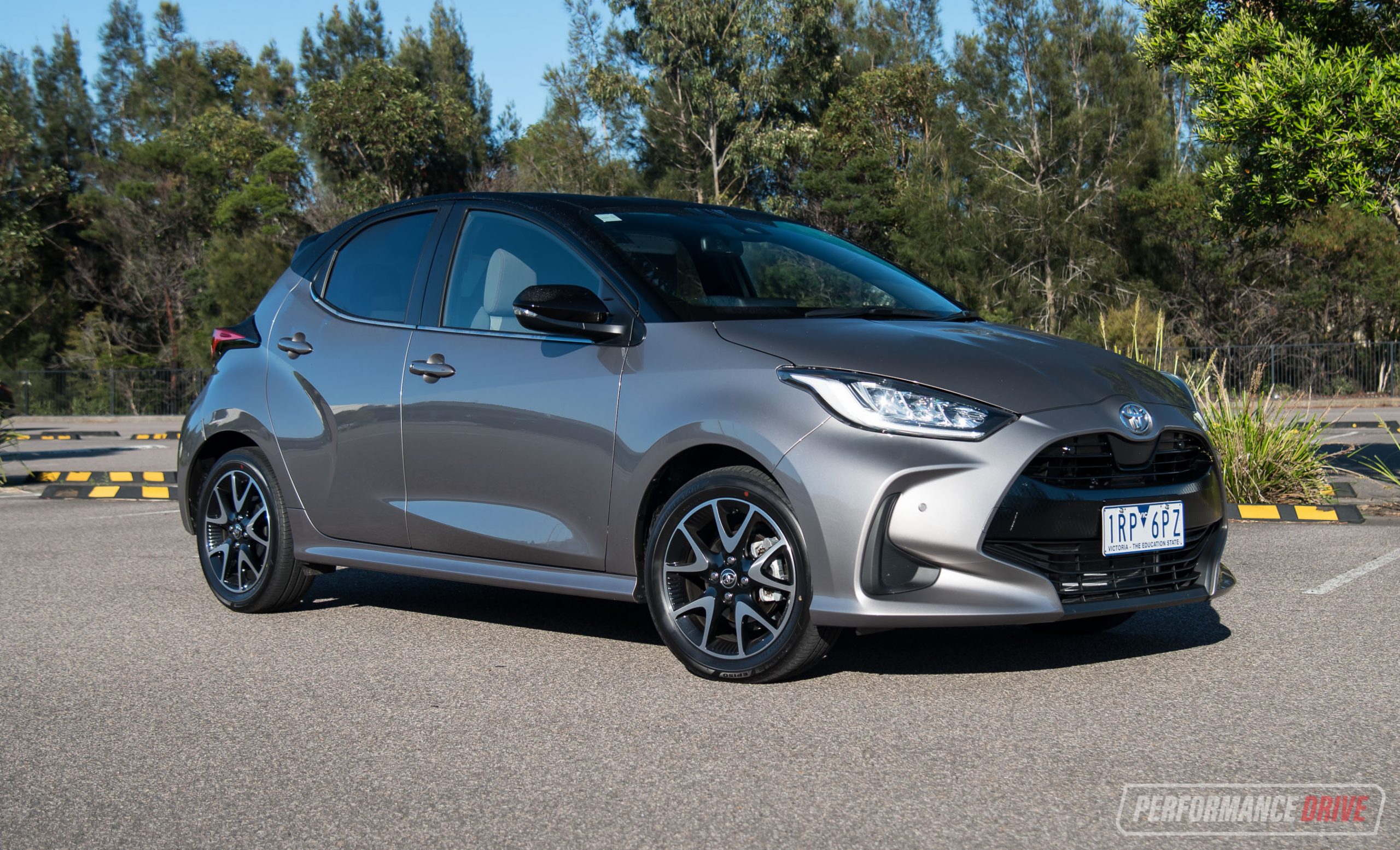 Throw everything you know about the Toyota Yaris out the window. Any preconceptions you have on the light-sized hatch will be forgotten when you get to know the fourth generation 2021 model. It would have to be one of the biggest changes to a car’s formula we’ve seen this year. It’s no longer boring, cheap, featureless or powered by a boring engine. 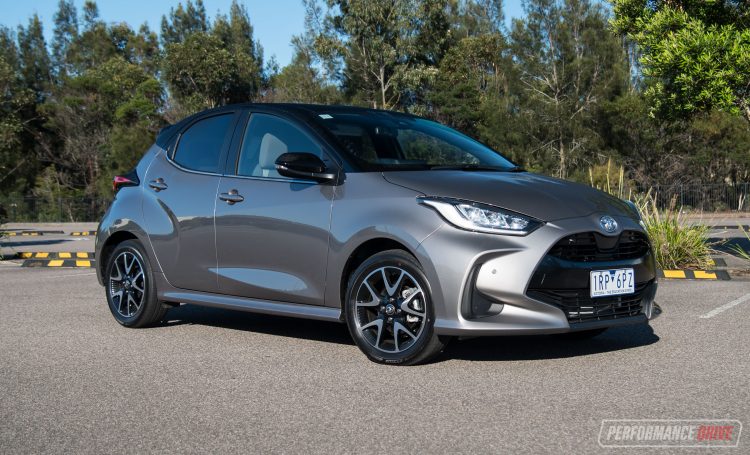 We see an entirely new choice of engines including a hybrid, a more practical interior, and levels of funky that are worlds apart from previous models. A sedan version is MIA for now.

The 2021 lineup begins with the Ascent Sport, which can be chosen with a six-speed ‘intelligent’ manual transmission or a CVT auto. It starts from $22,130. We can read your mind when you think, ‘wait – you could buy a bigger Corolla for that price!’ In Toyota’s defence, the price hike is somewhat justified by its higher-than-ever level of standard features (more on that later). The range rises to the SX, and to the ZR at the top. Both of which come with a CVT auto only.

There are two engines to choose from in the SX and ZR. Toyota debuts its new 1.5-litre naturally aspirated three-cylinder petrol engine, available in all variants. It squeezes out 88kW and 145Nm. Also debuting is a same-sized petrol engine paired with an electric motor-generator and lithium-ion battery to form one of the smallest hybrids on the market. It gets going with a combined maximum power output of 85kW. Prices peak at $32,100 for the ZR hybrid, or you can save $2000 by going for the petrol ZR.

We spent some quality time with the new Yaris, testing the SX petrol, ZR petrol and the ZR hybrid to investigate more about the new model. 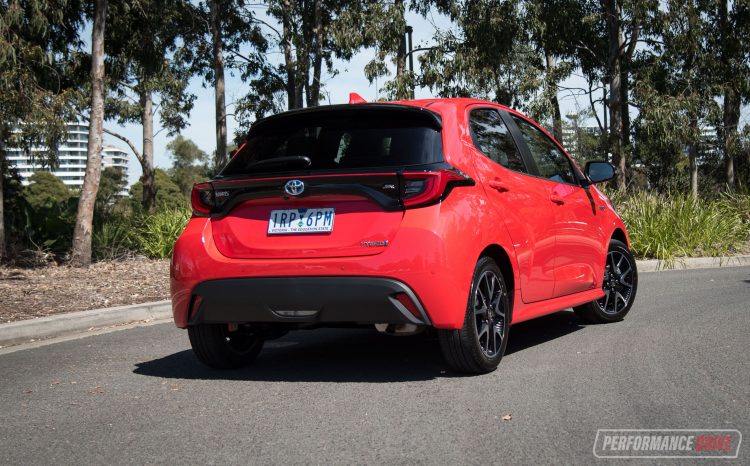 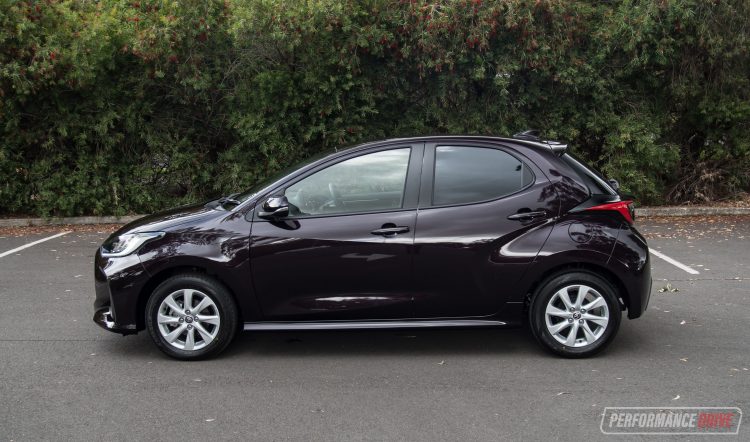 Before we jump into how the new Yaris performs, let’s attempt to help Toyota justify the price hike before you look away (and no, we don’t get any kick-backs from Toyota). Every Yaris model now gets features that not even premium cars offer as standard – and so it should. Some of these go a long way in mitigating accidents or at least reducing their severity. After all, the safety of a passenger in a Yaris is just as important as the safety of a passenger in an Audi or Mercedes-Benz. 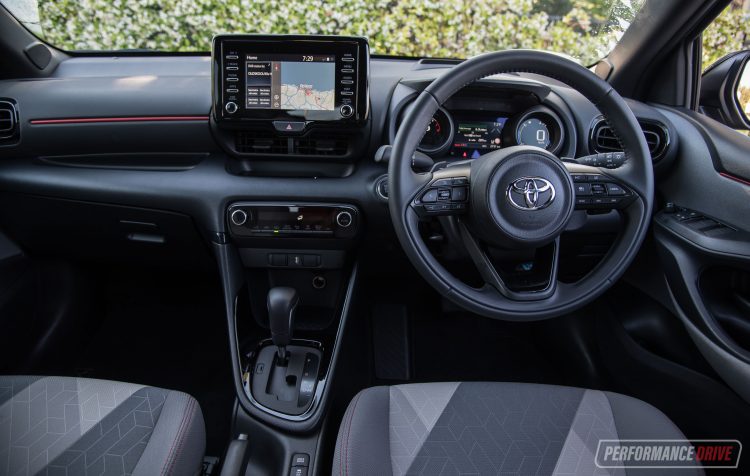 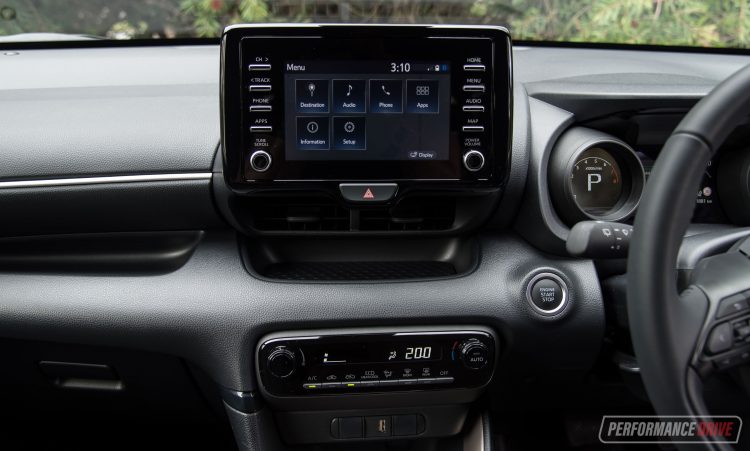 If the feature listing and price is not your worry, but owning a boring hatch is, then you are in for a surprise. Up front you’ll notice more aggressive and bolder styling. It goes with a large black front grille and slick contours that sweep towards the rear, as though they have been shaped by high-speed wind itself. The ZR models with LED lighting lift the modern and sporty appeal even further.

The rear also looks entirely different from previous generations, with a flared-out shape towards the wheels and rear lights that are joined by glossy black panelling. 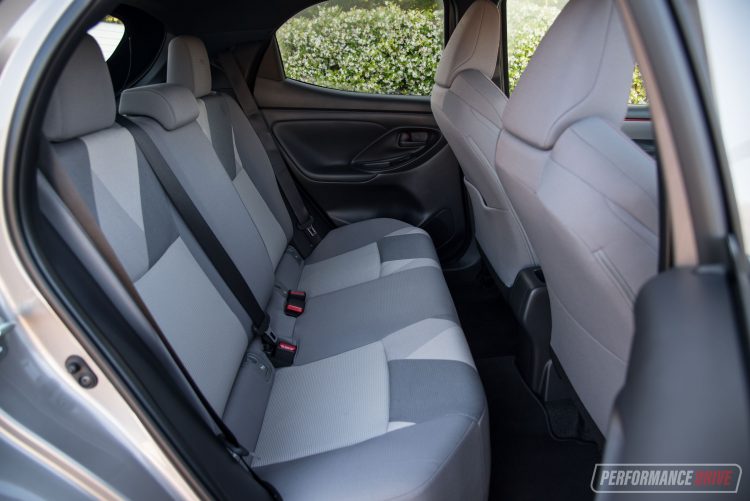 On the inside, the funky trend continues – it no longer feels like an entry-level car. There are sculptured sections and high-quality buttons and touch points. It’s also quite minimalist, which makes the cabin super-easy to navigate. The only gripes we have are that the seats lack bolstering and support, and the 7.0-inch multimedia screen seems a bit dated – it needs a font and menu upgrade.

Somehow, Toyota has also made the interior incredibly roomy for a light-market hatch. Even though the Yaris is now shorter and lower (by 5mm), it has a longer wheelbase (40mm). Which means the front and rear rows have loads of room for this size car to comfortably accommodate four adults. Also abundant is the amount of storage holes, shelves and holders scattered around. There’s a place for all your belongings.

It’s just a pity there is no wireless phone charging pad or auto dimming rear or side mirrors in any variant. In the very rear, the boot offers a modest 270 litres of volume (down from 286L in the previous model). There is no change in space between the hybrid and non-hybrid models, which is a bonus. 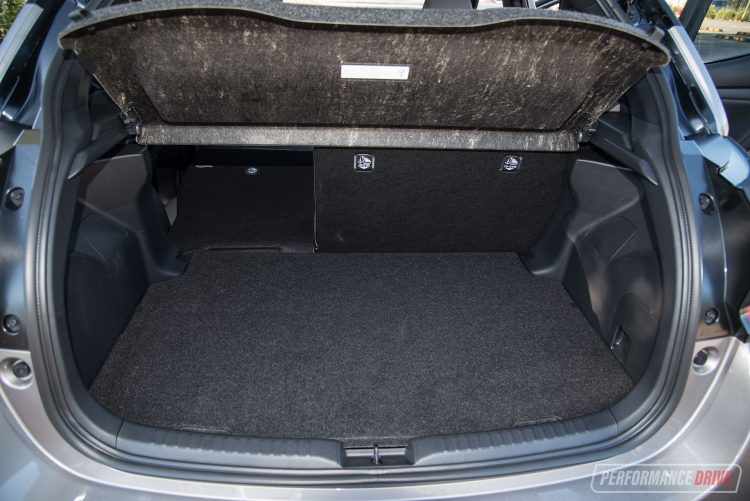 Both powertrains in the lineup comprise of a new 1.5L three-cylinder naturally aspirated petrol engine. It is a much more willing and throatier engine than previous gens. It doesn’t feel uncomfortable to push hard as it seems to have a more useable powerband. In non-hybrid form peak torque is spread from 4800-5200rpm. We don’t usually see any spread in torque with non-turbo engines, let alone puny units like this. So that’s a real positive.

Starting with the petrol-only version, it is quick to zip up to speed in an urban setting. Although 88kW doesn’t sound like much, weighing only 1055kg makes it feel zippier than the numbers convey. Only when you approach a steep hill will you need to push it harder. We love the angry roar three cylinders produce, and the brilliant petrol consumption. Officially, it burns 4.9L/100km. We also achieved the exact same average in our travels.

This makes the case for the hybrid option a little harder to justify. Tacking on an electric motor-generator and lithium-ion battery gives an improvement of 1.6L/100km, officially, to bring it down to a frugal 3.3L/100km – we averaged 3.5L/100km in the ZR hybrid. If you’re doing a lot of driving, maybe those differences are worth the extra upfront cost. But there is a $6k difference in price from the cheapest petrol variant and the cheapest hybrid variant. 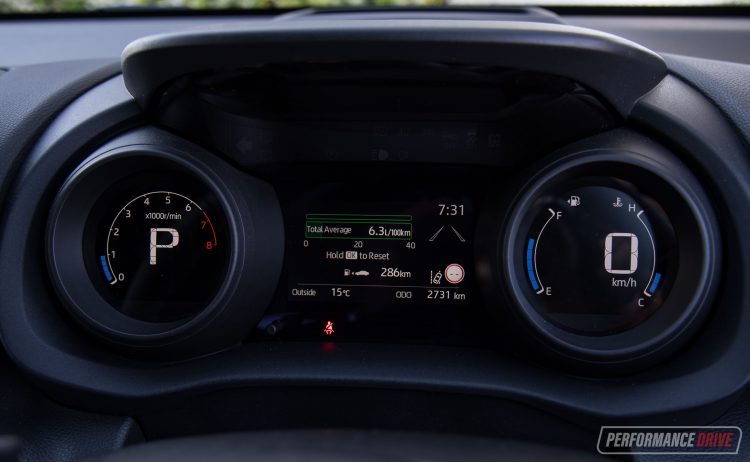 Of course, it’s less about speed when it comes to green cars. Or in Toyota’s case, the smallest hybrid car on the market. When you look at CO2 emission averages, the petrol emits 114g/km to just 76g/km in the hybrid. And the other benefit is that filling up the tiny 36L petrol tank with E10-rated fuel at $1.10 per litre, you should be able to travel at least 1000km at the cost of $40 on one tankful in the hybrid (a 1091km range, using the official average consumption). The petrol has a 40L tank, translating to a theoretical average range of 816km. 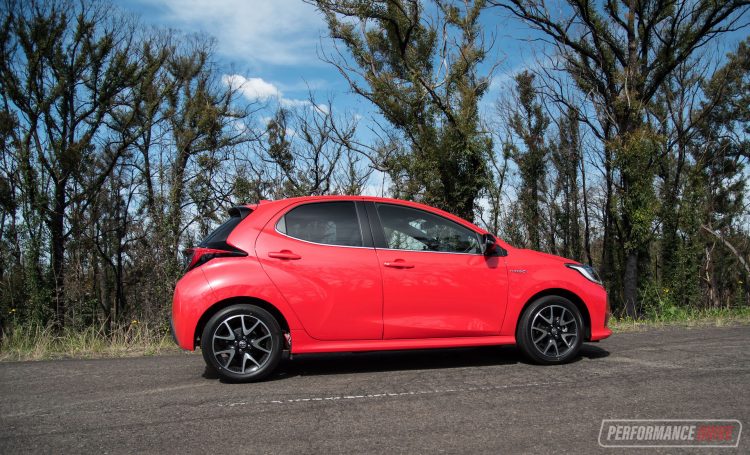 The Yaris parades with extremely light steering to give an effortless and peppy feel. Though, this means it feels less stable at highway speeds when keeping in the lanes. Due to tall tyre sidewalls on the eco tyres with a low friction compound, it can feel a little saggy around fast corners, but this means it handles bumps and holes with poise and control. Overall chassis tautness and response is fantastic though, no doubt thanks to the sound TNGA platform.

We have said it many times before that we are not fans of CVT auto transmissions. But in this application, where economy is key, it does makes sense. In our opinion, this is one of the better-feeling CVTs as well. It doesn’t make the engine drone or feel breathless. And there’s a “launch gear” which behaves like a normal first gear, so it gets off the line with a traditional, progressive build. 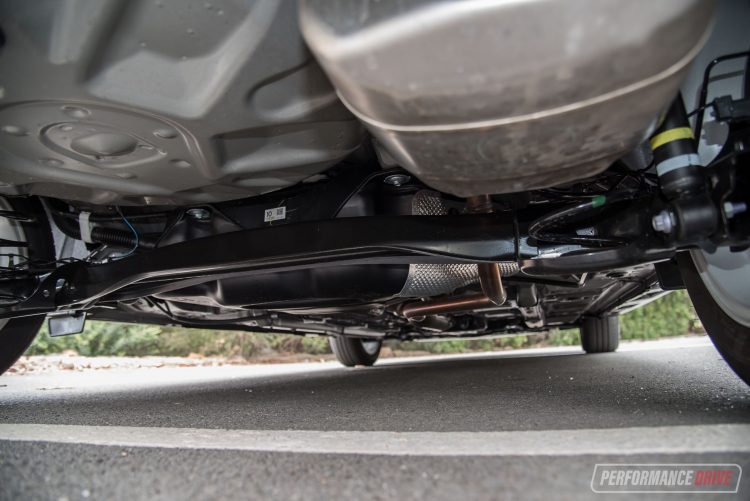 The bold new Yaris is a game-changer for this end of the market. Toyota has taken a stance to sell a car with all the bells and whistles that are commonly omitted in the cheap car segment. It helps that choices for consumers are dwindling more and more. Every new Yaris buyer now has access to the same crucial safely features of higher up classes.

The new three-cylinder engine is a huge improvement over the last generation. And, surprisingly, it pulls it off without the use of a turbo. However, the hybrid version is also very inspiring as we progress further into the clean and green space. As a result, it’s our pick.