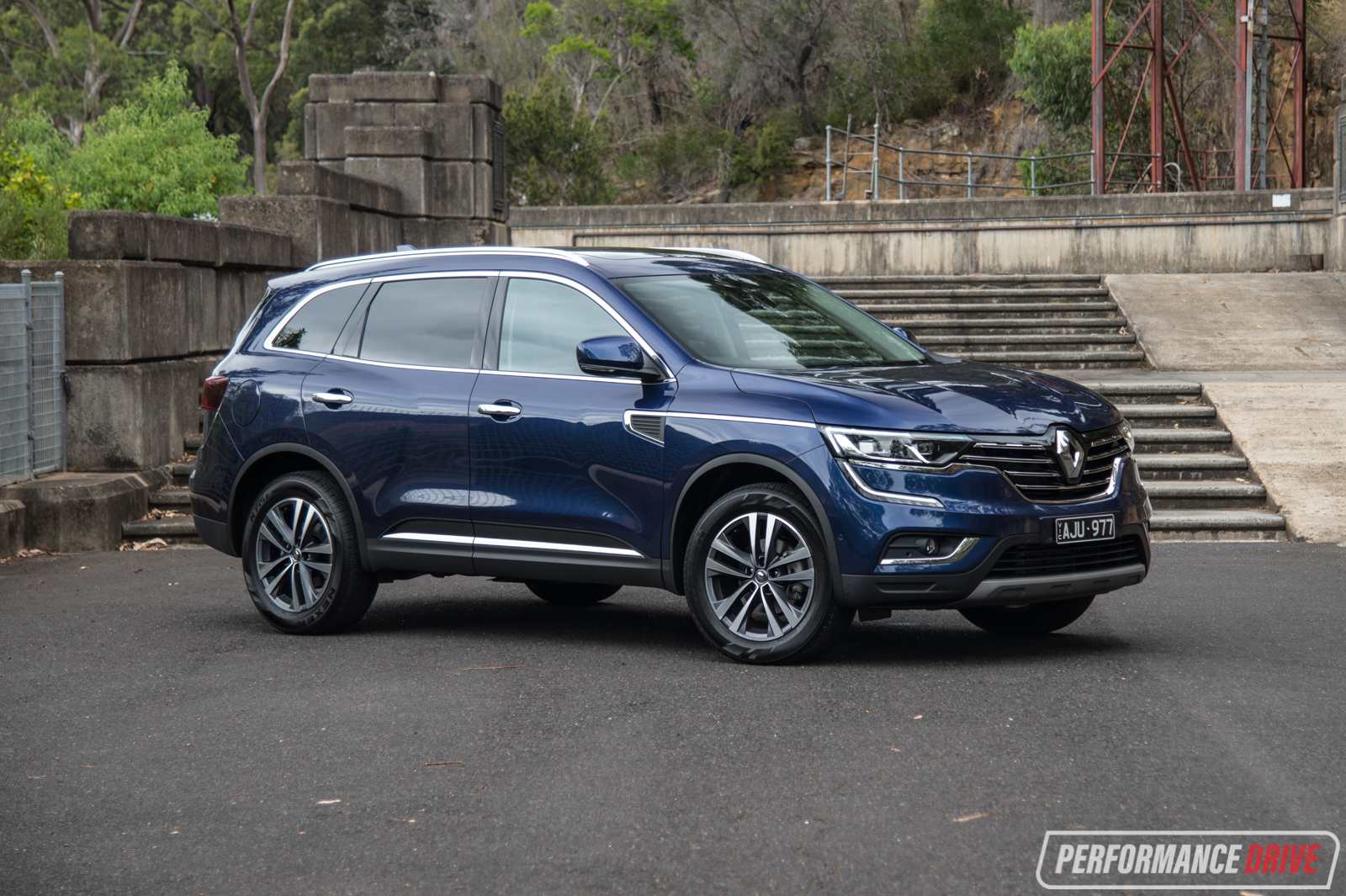 The 2017 Renault Koleos has a very mixed pedigree. It is a French-designed car sharing its platform and mechanicals with a Japanese SUV (Nissan X-Trail) built in South Korea by Renault-Samsung. Does this mean it has an identity crisis? Or has Renault bred a multicultural medium SUV masterpiece? 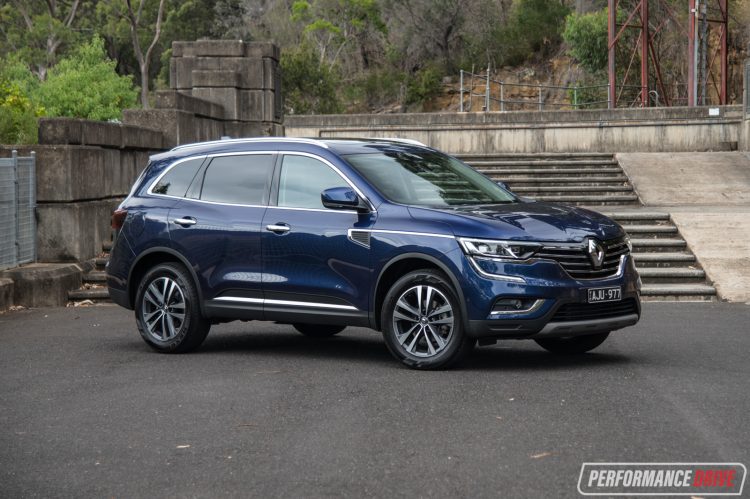 The Koleos has some pretty serious competition. January 2017 new car sales indicate the medium SUV segment has grown by 1.2 percent compared with 12 months ago. This category is dominated by the Mazda CX-5, Hyundai’s Tucson, the Koleos’ sister car,the X-Trail, Kia Sportage and Subaru Forester – in that order.

The Koleos’ meek sales of 149 in January is a massive improvement on its predecessor, but may be attributed to Renault’s relatively small dealer network, five-seat only availability and no diesel option. It is early days yet, though, and sales could well increase once word gets out. Also, things like Renault’s Concept Store in Hornsby Westfield signal the company is trying new things to get customer attention.

Sales are seldom an indication of greatness, though, so we got ourselves the top-of-the-line Renault Koleos Intens to see if standing out is a good thing. 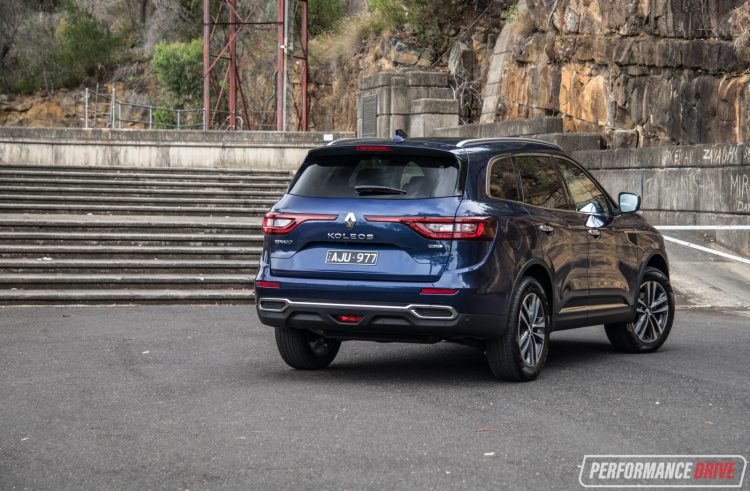 The Koleos starts at $29,990 for the front-wheel drive Life model, while the middle of the pack Zen which we set upon the CX-5 earlier this month starts at $33,990. At the top of the range, the price and equipment Intens-ifies, priced from $43,490. This is where things like panoramic roof, automatic parking, 8.7-inch tablet with R-LINK2, 18-inch alloys, auto up and down tailgate, and autonomous emergency braking come into play. No sign of adaptive cruise control, though.

For those interested in the figures, the Koleos exclusively uses a 2.5-litre four-cylinder that makes 126kW at 6000rpm and 226Nm at a rather peaky 4400rpm. Connected to a CVT auto, it shifts around 1608kg, which is weirdly 3kg lighter than the 2WD models. Petrol consumption is quoted at 8.3L/100km, which translated to 9.0L/100km for us. Quite good.

The F̶r̶e̶n̶c̶h̶ J̶a̶p̶a̶n̶e̶s̶e̶ Korean SUV definitely has an upmarket visual flair. The headlight jeweling, C-shaped DRLs and grille detailing plus the rear-end LEDs and dazzling blue paint meant our car looks to be in the calibre of X3, GLC, Macan or Q5 competitor from the outside. The pronounced hips at the rear window line give the SUV a muscular stance.

The faux clamshell bootlid character line is a bit cheesy, however, with the actual shutline further inward rather than the expensive-to-produce Q5 or Lincoln MK X-style items. There is a family resemblance to the Megane which succesfully hides the car’s Nissan-y origins. This story continues inside. 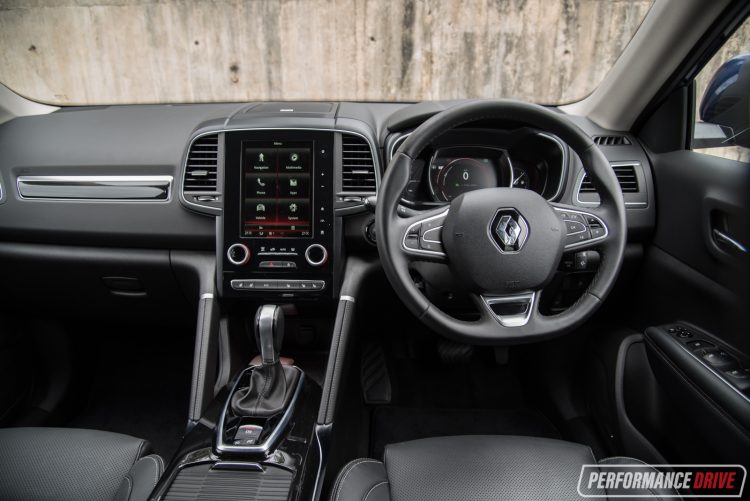 Size-wise, it is one of the larger vehicles in its class at 4672mm long, 1843mm wide and 1678mm tall, on a 2705mm wheelbase. Space is well utilised, with roomy accommodation in the back and rear ventilation adding to the comfort. The panoramic sunroof makes things feel airier, and boot space is a generous 458L with the rear seats up, or 1690L with them folded. Towing capacity is two tonnes.

The things that let the package down for us are mainly what we’ve covered in previous Renault reviews. Unlike the Zen, this Intens does away with a volume knob and fan speed buttons. This means more time is spent going through the menu to do these than is necessary.

The audio control pod obscured by the steering wheel and cruise control switch in the console add up to a user experience that is not intuitive. Unlike Citroen’s latest interiors, which are functional and minimalist, the Renault’s ‘Frenchness’ is gimmickry.

While we’re griping, the ‘new car smell’ was a bit more pungent and dour than that in most new cars. The Bose stereo does please the ears with a nice bass kick and quality sound, although our car did not want to stream music via Bluetooth; nor does the R-LINK2 system featuring Apple CarPlay and Android Auto.

On a positive note, the interior ambient lighting can be an array of colours, as well as the instrument display, which is very clear and easy to read. Definitely a highlight and something which gives the car a real stand-out quality in its class. So despite head-scratching switch placement and a bewildering infotainment system, the exterior and interior do have a premium aura about them, with plenty of space and storage to boot.

Any argument that the X-Trail basis robs the Renault of authenticity is countered by trustworthy Japanese engineering and the lower parts costs that entail; $299 capped-price servicing with an impressive 30,000km interval (or 12 months). Combined with a five-year warranty, this is shaping up to be a smart long-term proposition. 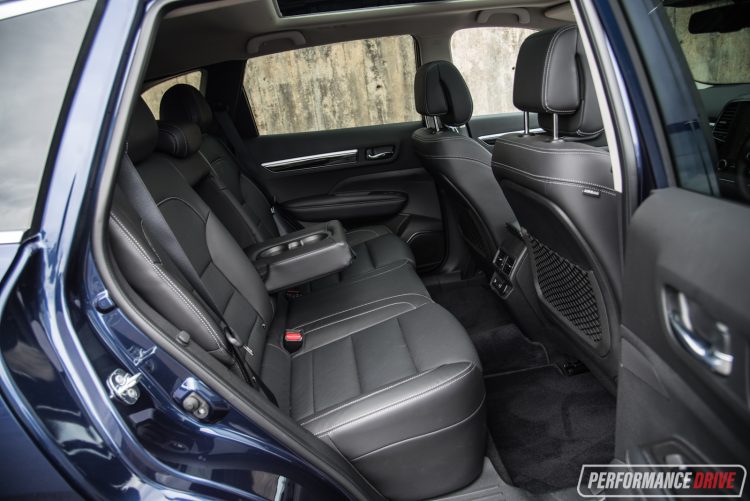 On the road, the Koleos is a quiet, predictable thing to pilot, with a commanding driving position thanks to 206mm of ground clearance. It will go where you point it without too much protest or histrionics, and with less body roll than you’d expect. The steering has a nice fluid feel but the rack is slow and does not telegraph any information back to your fingertips at all.

This theme continues with the driveline. The Nissan-sourced QR25DE is quick enough to respond, and the CVT does a surprisingly good job of keeping the engine singing where it needs to most of the time. There is not much in the way of charisma though, but it gets the job done and is quite efficient doing so.

And that pretty much sums up the Koleos’ driving experience. It is a relaxing way to get places but isn’t going to appeal to driving enthusiasts as much as, say, a Mazda CX-5 or Kia Sportage. It never goads you to hustle it and keeps you isolated from the action. It shows the above comparison with prestige SUVs only goes skin-deep.

But for a fraction of their price, it looks the part and is easy to manoeuvre – particularly with the hands-free parking, good visibility and easy steering.

The biggest blot on the Koleos’ copybook came during our braking test. As a cost-cutting measure, cheap and nasty Nexen tyres are used. Although braking itself was only just below class standards, this test exposed the tyre’s weak link; we suffered a blowout without much provocation. After that, the Koleos wore its undersized steel spare with shame. How about some Michelins like your other French cars, Renault? 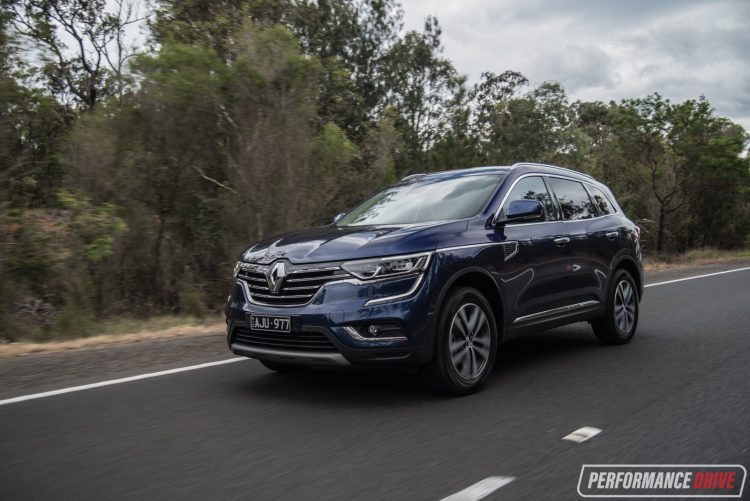 If you’ve looked at the Nissan X-Trail and want something with a bit more flair and Gallic flavour, then the Koleos does fine. It has a level of detailing that elevates it above the donor car and helps it excel in areas that matter to some SUV buyers. Space, towing, fuel economy and features are examples.

The combination of Japanese mechanicals and reliability with European design at an affordable price is enough to make us wonder why it isn’t doing any better on the sales charts.

Things that blunt the car’s appeal include the lack of a diesel engine or seven-seat option, competent but bland driving character and crap tyres. If you can live with those, it has its rewards.

CONS:
– Bland drive character and engine
– Low-grade Nexen tyres
– Flawed infotainment system
– Strange placement of some buttons, can be distracting
– Keycard does not have a keyring
– No full-sized spare on this top-spec Intens
– No diesel option