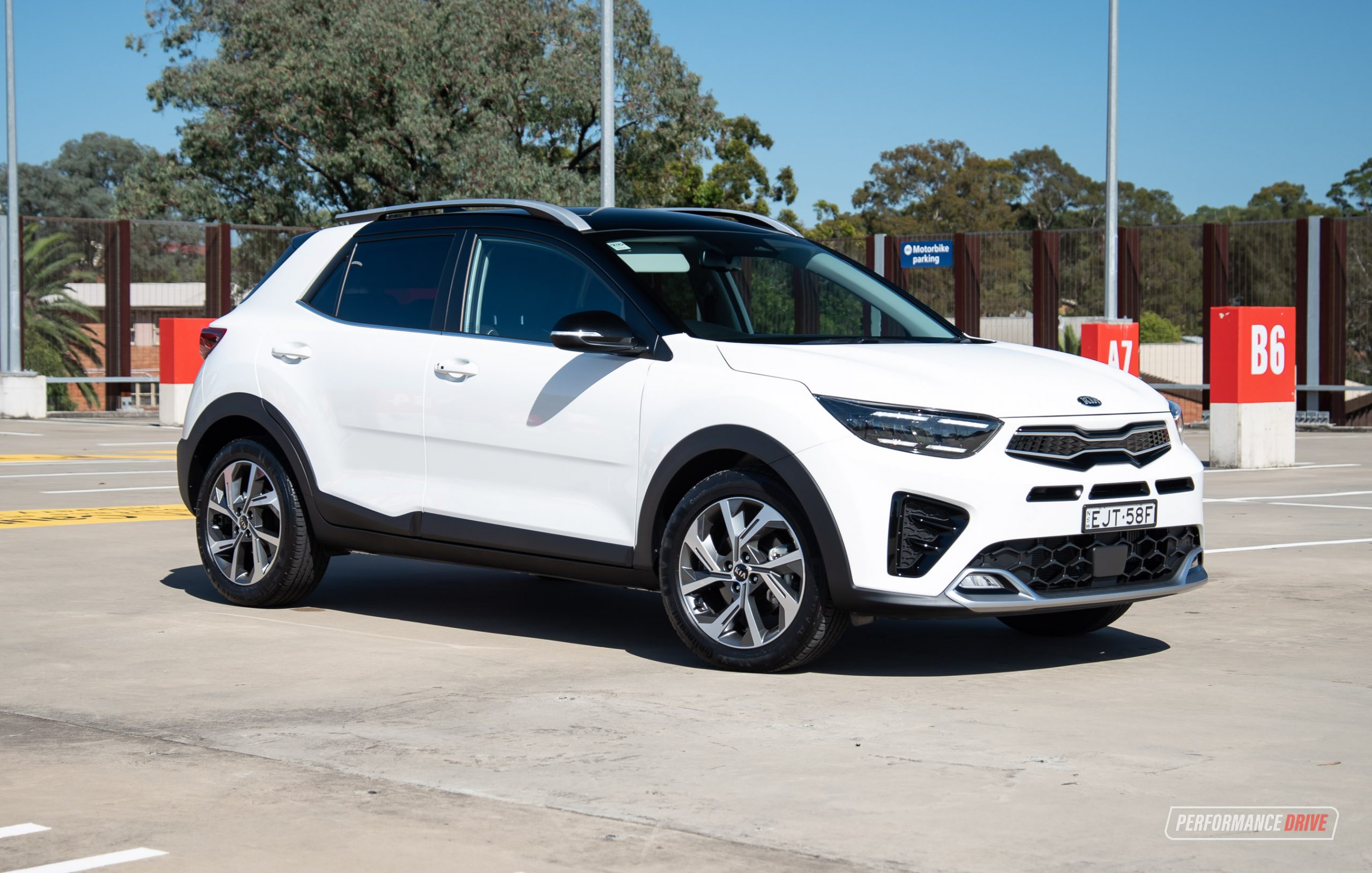 Although it has been on sale overseas for a few years now, the Kia Stonic is a brand-new model for Australia. It slots beneath the Seltos to become the brand’s new entry-level SUV. Here we’re checking out the flagship GT-Line variant. 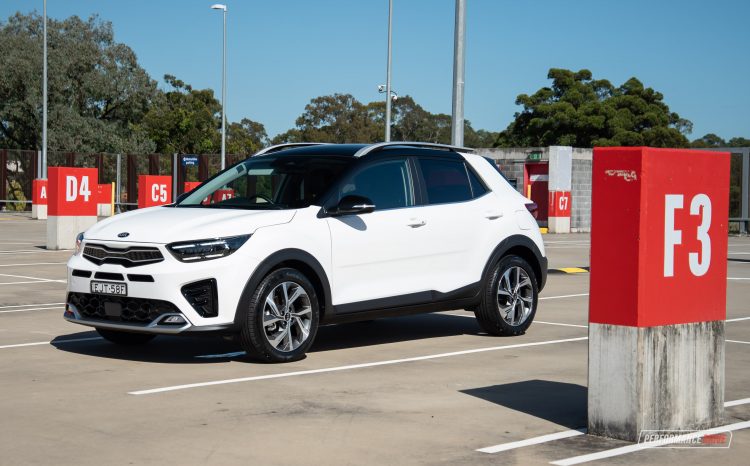 The Stonic debuted in 2017, and the name is a portmanteau of the words speedy and tonic. Despite its age the design does seem to showcase a modern character with themes not unlike many of its latest showroom siblings. The design was signed off by former Audi designer and now Hyundai Motor Group styling boss, Peter Schreyer.

Going for the top GT-Line gets you a perky 1.0-litre turbo three-cylinder engine that generates 74kW and 172Nm. This is sent exclusively through a seven-speed dual-clutch auto and front-wheel drive system. A base model Sport offers a 1.4-litre petrol producing the same 74kW but with 133Nm. It’s available with either a six-speed manual or auto. According to the Kia Australia website, there is a base S variant coming soon as well.

Just the two variants are on sale in Australia (for now), with prices starting from $24,490 for the manual Sport, $25,990 for the auto Sport, and from $29,990 for the top GT-Line. There are no optional extras, with metallic (Signal Red) and premium paint (Sporty Blue and Mighty Yellow) available at no cost, including Clear White (solid) as shown here. 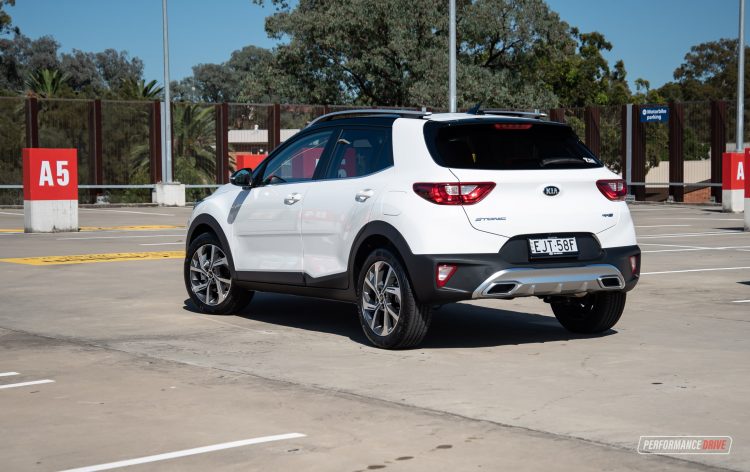 Okay, so the Stonic is not the smallest off-road-inspired model that Kia offers. That’d be the Picanto X. However, that isn’t classified as an SUV by the Federal Chamber of Automotive Industries in Australia. Nonetheless, the Stonic competes in the smallest SUV class, called ‘SUV Light’. In this space it has to fend off the likes of the Ford Puma, Nissan Juke, Hyundai Venue, and, the class’s most popular, Mazda CX-3.

Underneath it all is the same platform that underpins the Kia Rio. That gives you some idea of its size and proportions. Compared with the key rivals we’d call this a crossover, with a wide and low stance as opposed to a tall and upright stance of, say, the Hyundai Venue. Ground clearance is measured at 183mm, which helps facilitate an ideal seating height for easy access and exit. 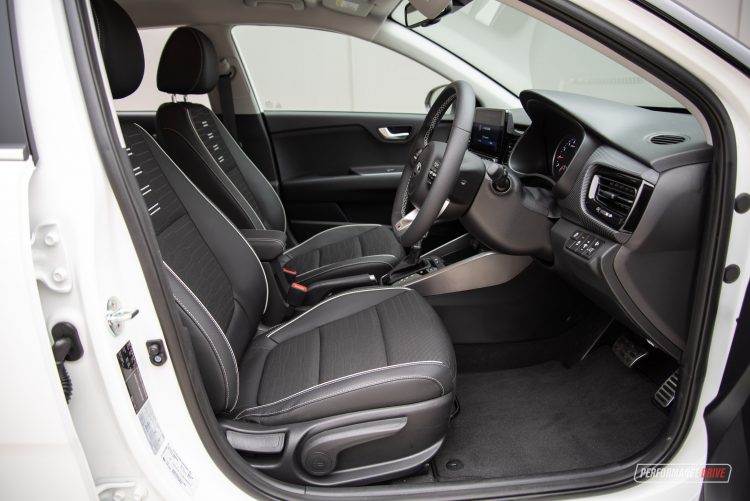 Kia has once again put together a modern yet practical cabin environment, with a high level of thoughtful detail making it an excellent everyday companion. You’ve got neat storage pockets and trays in the front, ergonomically-placed cup holders, and even a centre armrest/storage box. There’s also door pockets with sections to secure an average 600ml bottle.

Passenger space is good for this class, with enough headroom and legroom and general space to move about. It isn’t claustrophobic in the front, partly thanks to the low centre console and raised ceiling. 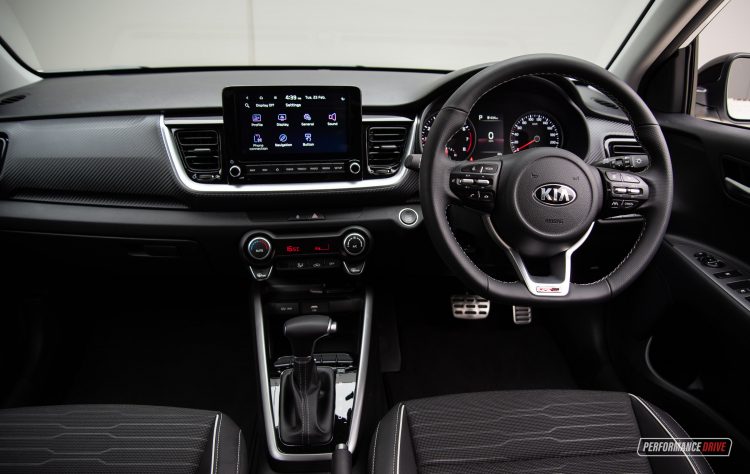 The GT-Line comes with an 8-inch touch-screen media interface running all of the usual apps, including sat-nav, a rear-view camera, and Android Auto and Apple CarPlay. Climate control is also standard on the GT-Line, and the driver gets to play with a GT-Line-specific sports steering wheel. Digital radio is not available (perhaps reflecting the Stonic’s age), and the same six-speaker stereo is shared with the Sport.

Rear seat space is obviously pretty tight, but it stacks up well against its main rivals we think. There’s probably no need for rear climate vents in a vehicle of this petite size, although it’s always great to see them included, especially in Australia where summertime gets quite hot. Kia has provided a rear charging port though, and bottle holders in the doors. There is no flip-down centre armrest. 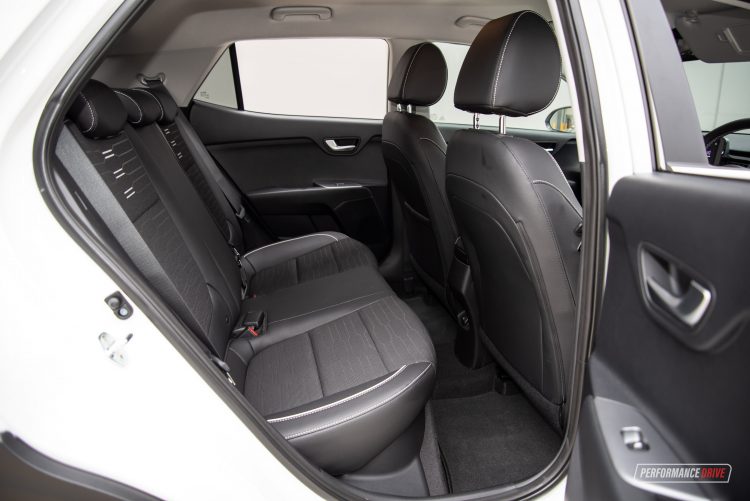 Boot space is actually very respectable for its class, measured at 352L, and you have the convenience of being able to flip down the rear seats to expose 1155L. They don’t fold down completely flat, unfortunately. However, overall volume is higher than the Kia Rio, which offers 325 litres.

The main benefit of the GT-Line over the Sport model is that you get a 1.0-litre turbo three-cylinder engine. It’s a shame the Stonic misses out on the old 88kW tune seen in the previous Kia Rio GT-Line, but this is a new engine, falling under the Smartstream family. With 172Nm and only 1227kg to lug around, the GT-Line performs adequately for its intended purpose. Roll-on acceleration is probably its best exercise, with peak torque spread between just 1500rpm and 4000rpm.

We experienced some unusual surging sensations with this particular test car, so we didn’t get the best acceleration results with the Vbox. It felt like there was a turbo boost leak, or perhaps a transmission calibration issue which wasn’t releasing maximum power. We tried testing it on different days and with different fuel, too.

As a result, the best 0-100km/h time we scored was a slow 12.08 seconds. In a regular working condition, we reckon it could achieve the sprint in around 10-11 seconds. Obviously acceleration isn’t very important in a vehicle like this, however, Kia claims the Stonic is “speedy”… while involving something that provides stimulation and vigour. 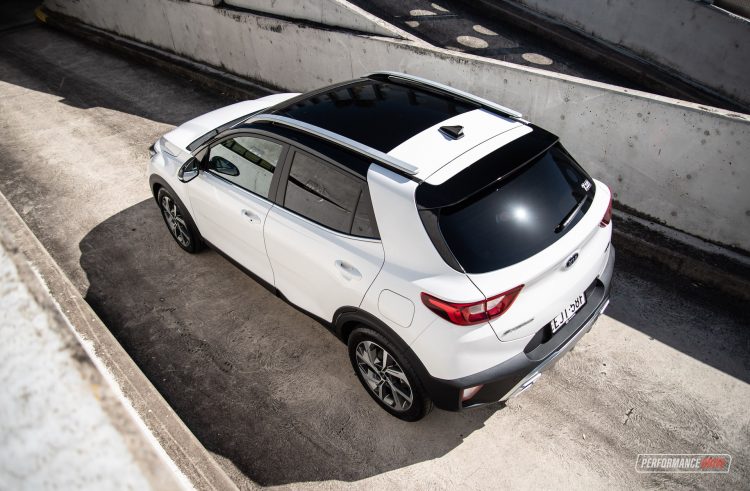 We’re not sure about any of that. Sometimes marketing departments can get carried away with names and the actual character of a vehicle. What the Stonic is more about is city-living practicality, and user-friendly driving. The visibility out the front is excellent, partly thanks to the raised seating position, and even vision over the door sills is very open and clear. Peering through the back gets a little more constricted due to the thick C- and D-pillars, while the rear windscreen is also pretty thin, but no worse than most of the rivals.

All models feature the same suspension setup and tune, according to the specs, with MacPherson struts at the front and a basic torsion-beam arrangement at the back. Along a spirited road the Stonic feels reasonably well accomplished and agile, with the nose tucking in accurately and holding its directed line well.

The 205/55 Continental ContiPremiumContact tyres also supply plenty of grip, and there’s a decent sidewall for flexibility over bumps and small potholes. These tyres also provide a mild degree of off-road support, suitable for a dirt road, as opposed to some top-spec competitors which feature lower-profile tyres. 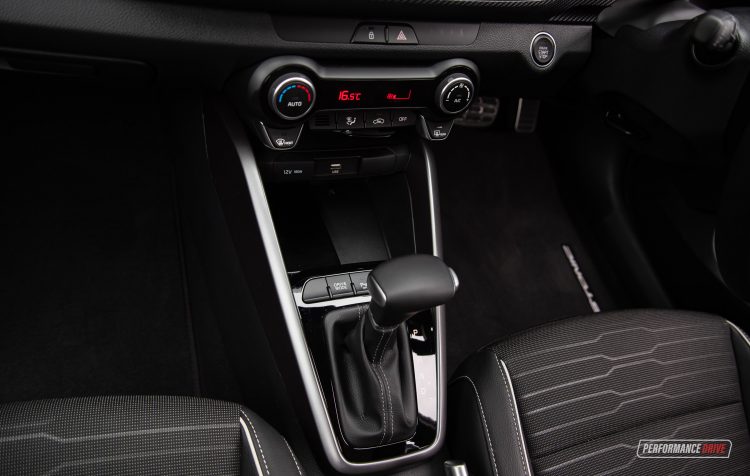 The steering is really nice, and helped by the sporty three-spoke steering wheel. With excellent pedal placement and a good driving position, this is definitely a vehicle that encourages you to take the longer route. There are a trio of driving modes to toggle through which add another dimension of interaction. Although, the Sport mode offers the most noticeable change in characteristics. It doesn’t, however, alter the suspension tune or anything substantial like that.

In the Eco mode the powertrain is very sluggish and the transmission’s response to kick-down is delayed. Obviously this is all to try and conserve as much fuel as possible. However, with an engine this small we don’t think it is as effective as an Eco mode in a larger vehicle with a larger engine. You end up pressing the throttle harder in this just to keep up with traffic. The official consumption average is just 5.4L/100km, and we averaged 7.5L/100km in mixed conditions over a distance of about 250km of testing.

Really, our only gripe with the drive experience is the powertrain. We don’t think a dual-clutch transmission is necessary for the intended purpose or even market demand, as it can hesitate and roll during stop-start conditions. The engine, while very animated and fun, could be temperamental; in this specific test car it seemed to struggle intermittently, and other times surge and over-boost, almost erratically (take note during your test drive to see if you experience the same thing). 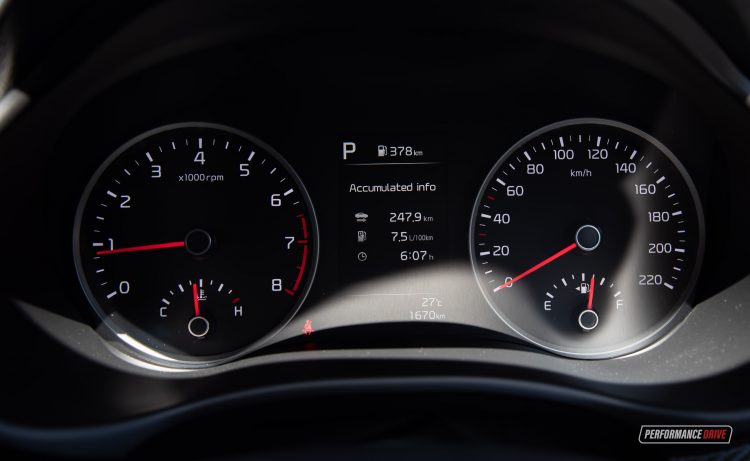 We think it looks superb, like most modern Kias. The packaging is spot-on for this market, and the price point of just under $30k undercuts many of the top-spec rivals. This little 1.0-litre turbo engine also has a lot of character, and the boot space puts some similarly-sized hatchbacks to shame.

It looks like Kia has created another attractive package with the Stonic. Our only concern is that it is already three years old, and we’re not completely convinced this little engine and, in particular, dual-clutch transmission are fit for purpose. Overall though, this is one that deserves to be on your shortlist if you’re in this market space.

CONS:
– GT-Line could do with further distinction over Sport model
– Strange surging acceleration on this test car
– DCT auto not necessary for this style of car; jerky and hesitant