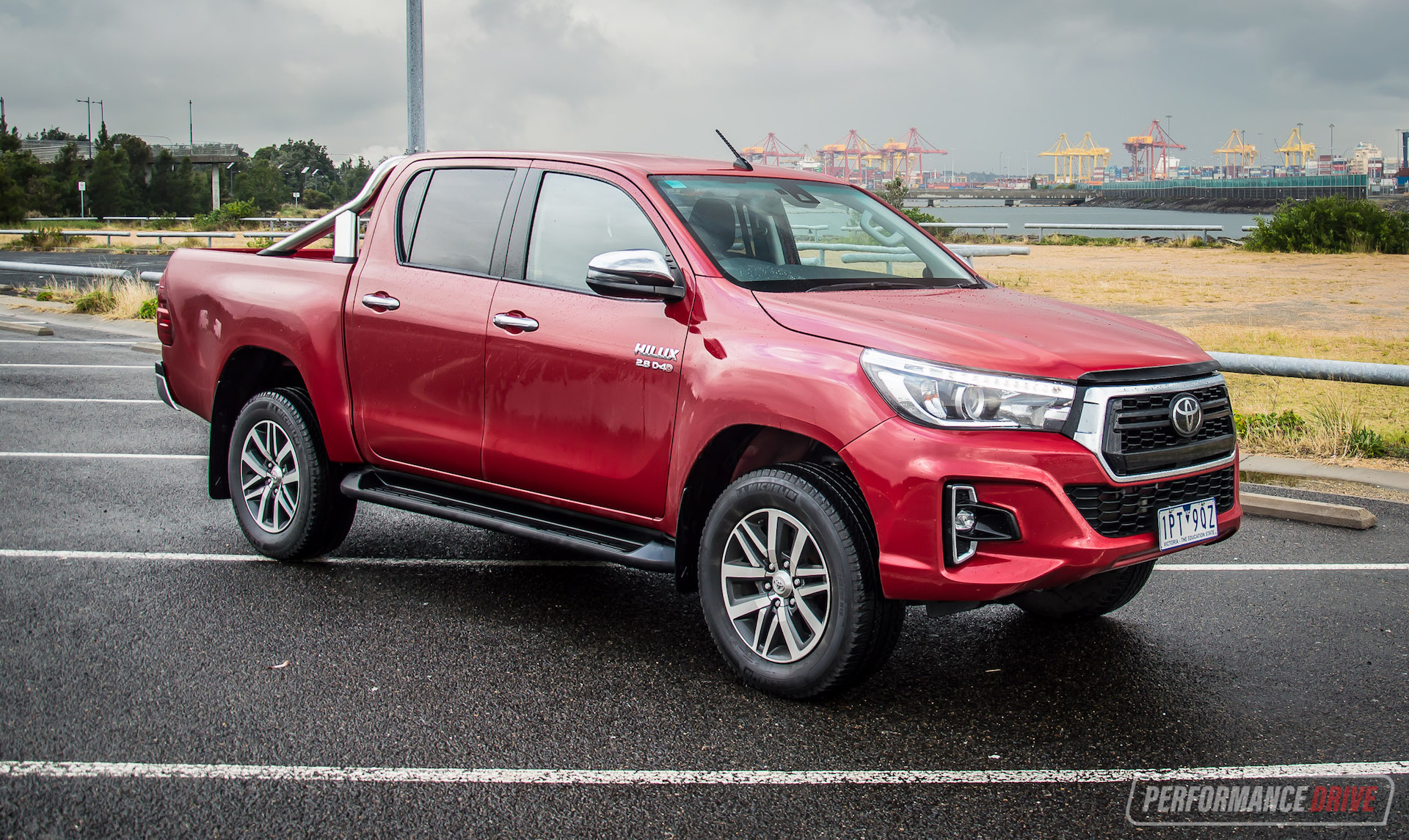 Australian drivers expect more than ever before from car manufacturers. Look at the humble ute, for instance. Gone are the days where it’s primary purpose is to exist as a reliable tool for tradies. Nowadays, it needs to carry the family on a daily basis, handle off-road tracks, look suave, tow a heavy load, and maybe have plenty of oomph too. 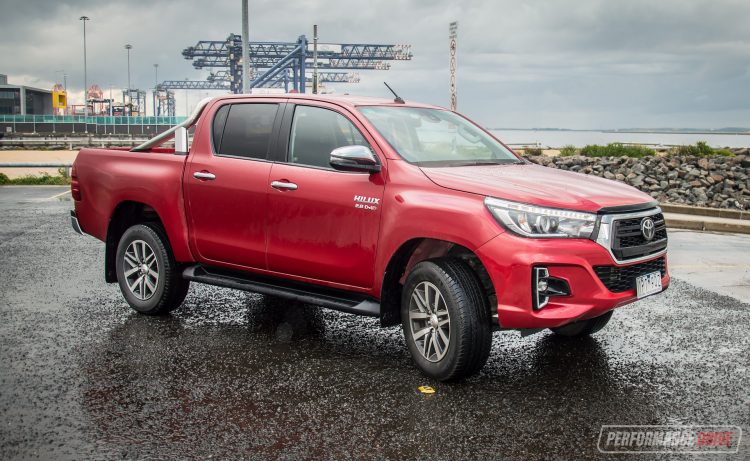 The 2020 Toyota HiLux is not just a vehicle that should be judged on how fit it is for a tradie, it needs to be judged for the thousands of non-tradie buyers as well. In fact, in 2019 it was the best-selling car in Australia by a long shot. According to VFACTS figures, Toyota sold 47,649 units (4×2 and 4×4 combined), 6,959 more than second place – which was also a ute – the Ford Ranger.

The current eighth-generation HiLux was first introduced in Australia in 2015. Five years later, a major update for the 2021 HiLux is set to be released here in August. We thought we’d test out the 2020 model before it arrives. The 2020 version is essentially the same as the very mild facelift that was released in mid-2019 – that we forgot to test, sorry.

There are lots of different variations to choose from, as usual. Single-cab, double-cab, extra-cab, cab-chassis, 4×2, 4×4… too many to mention. And many of those have a multitude of trim lines on offer and loads of accessories available. Here, we’re testing the SR5 4×4 double-cab with the six-speed auto. Prices start from $21,865 for the cheapest HiLux, while the SR5 auto 4×4 retails from $57,240 (plus on-road costs).

* Figures based on HiLux TRD previously tested by PerformanceDrive. Factory claims may be different 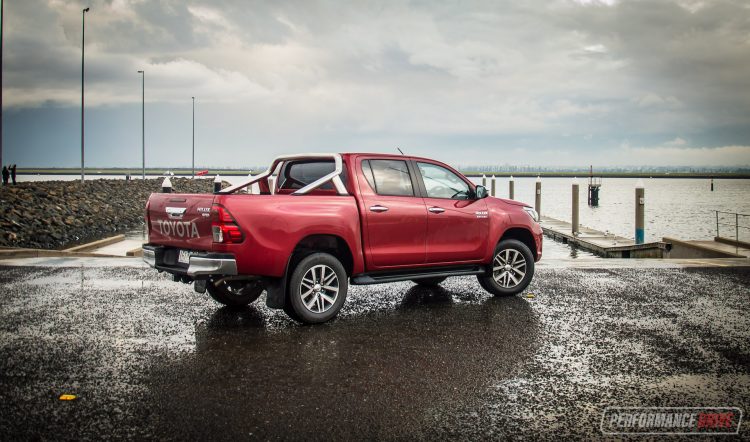 Hopefully the next model will get items like auto high beam, a wireless phone charger, rear collision detection with braking, rain-sensing wipers, an auto dimming rear-view mirror, Android Auto and Apple CarPlay, a better sound system, and a higher resolution centre touch-screen. Final specs for Australia are yet to be officially announced. 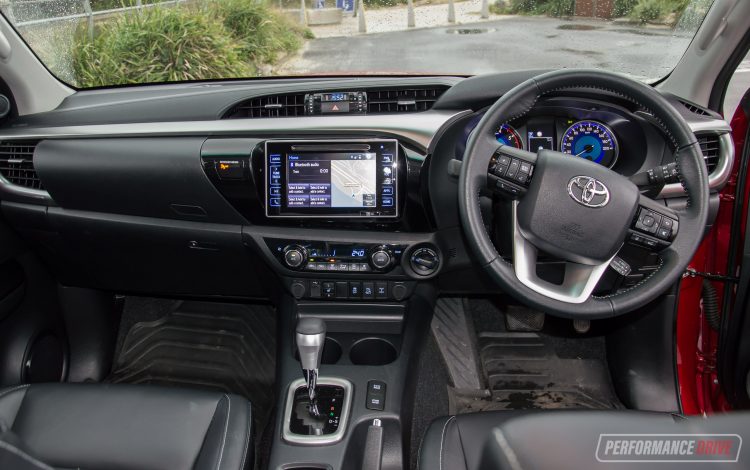 We think this model HiLux has aged well. It looks both rugged and modern. Large sloped headlights and LED daytime running lights give it an aggressive appearance. The same goes with the contrasting side steps and sports bar. However, we think it’s about time the interior gets a refresh.

There are lots of plain, hard and flat surfaces, and smallish low resolution screens that need to be modernised. There is a ‘premium’ interior upgrade available with the SR5, but that only gives you leather seats with front heating, and an electrically adjustable driver’s seat.

There’s a decent amount of space offered whether you’re a front or rear passenger. Not a lot needs to change here. And you get decent visibility in all positions, as well as that truck-like high-riding feeling that consumers seem to go for these days. 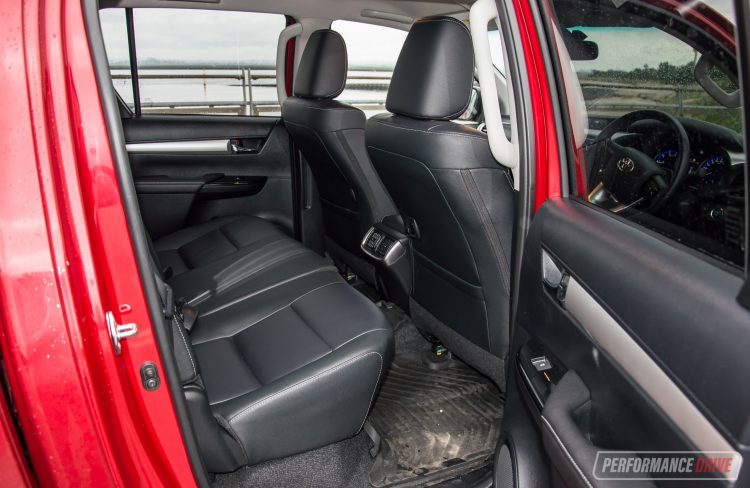 An area we’d like to see improve is the seats. They could do with a tad more lateral support to stop you from rolling out, and more adjustment wouldn’t go astray, like lumbar support or height adjustment in the front as standard.

If tray size is important to you, the HiLux is just short of the biggest, trailing behind the Volkswagen Amarok. It’s bigger than the Ford Ranger (but not deeper), Mazda BT-50 and Isuzu D-Max. But it has one of the shortest widths between the wheel arches. Braked towing capacity is rated at 3200kg (3500kg for the manual), with a payload of 955kg.

Service intervals are required more frequently than usual, at 10,000km or six months. And Toyota offers an improved five-year, unlimited kilometre warranty for all of its vehicles now, so that’s great.

On the road the large four-pot 2.8-litre turbo-diesel produces 130kW of hustle. And with 450Nm of torque available between 1600-2400rpm, it means there is plenty of pulling power for towing. In fact, it gets going by using its high levels of torque at low revs rather than sheer revving power. In other words, it doesn’t make much difference if you rev the engine past the peak power output revs of 3400rpm.

According to our tests the HiLux is one of the slowest dual-cab diesel utes on the market. We didn’t specifically time this vehicle but we’ve tested the TRD (based on SR5), the SR, and the Rugged X – all in auto form. Since the TRD is the closest to this SR5, we’ll mention that we previously clocked 0-100km/h in 12.33 seconds. Toyota has confirmed outputs will be turned up to 150kW/500Nm for the 2021 model. This will definitely come in handy.

The six-speed auto feels strong and presents no characteristics of confusion or hesitation. Gear shifts are appropriately gradual and smooth to help deal with heavy loads and all that torque under pressure. When not accelerating, you’ll notice the gearbox disengages from the engine in an almost ‘angel gear’ like state, or neutral. This greatly contributes to fuel economy.

Noise, vibration and harshness (NVH) levels are quite conspicuous at low speeds compared with an SUV, like most rough and ready diesel utes. At highway speeds though the HiLux’s powertrain is surprisingly smooth and quiet. There are no nasty vibrations from the interior thanks to what seems like excellent build quality and fitment. 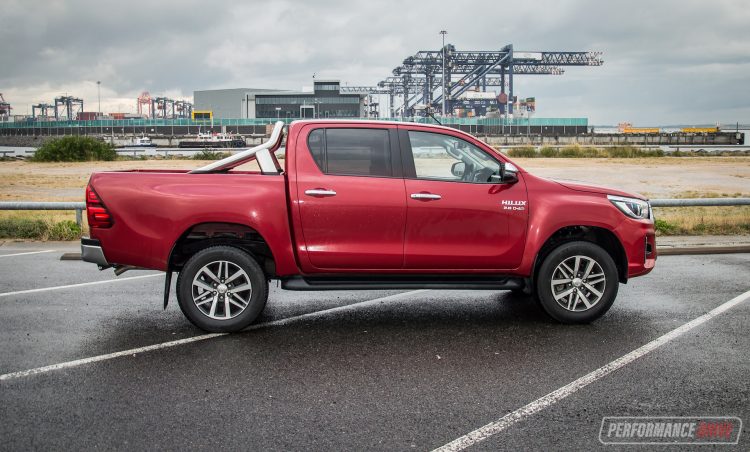 In terms of fuel consumption, officially the diesel scores an average of 8.4L/100km. We were not able to achieve under 9.4L/100km during our test. Going by the official averages, the HiLux betters the Mitsubishi Triton’s 8.6L/100km, the Ford Ranger five-cylinder diesel’s 8.9L/100km, but it is slightly worse than the bigger 3.0-litre Isuzu D-Max’s 7.9L/100km.

When it comes to ground clearance, the HiLux is one of the best in the class. It presents 279mm. The Triton offers 220mm, the D-Max has 235mm, and the Ranger offers 237mm. So, taking it over some boulders and chunky uneven ground won’t be a problem. 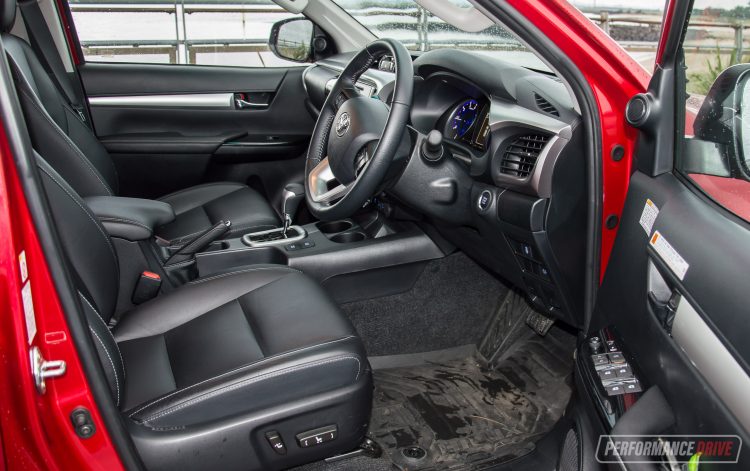 And speaking of off road, the suspension is made for it. Built on a ladder frame chassis there are long travel coil springs at the front, and heavy duty leaf springs with a rigid axle at the rear – it’s essentially a dressed-up workhorse. A higher amount of steering rotations is required from lock to lock compared with your standard SUV, but low sensitivity helps when negotiating technical sections.

All of this can make it a bit uncomfortable in daily conditions. Turning a corner in a carpark feels more like you’re turning a bus, and that heavy-duty suspension is jittery and bouncy, especially in the back and when not carrying a heavy load. Every bump in the road turns into a bounce.

Underneath, there are metal bash plates and so on to keep the important bits protected, and like some rivals, a rear differential lock, hill-descent control and low-range gearing is included. 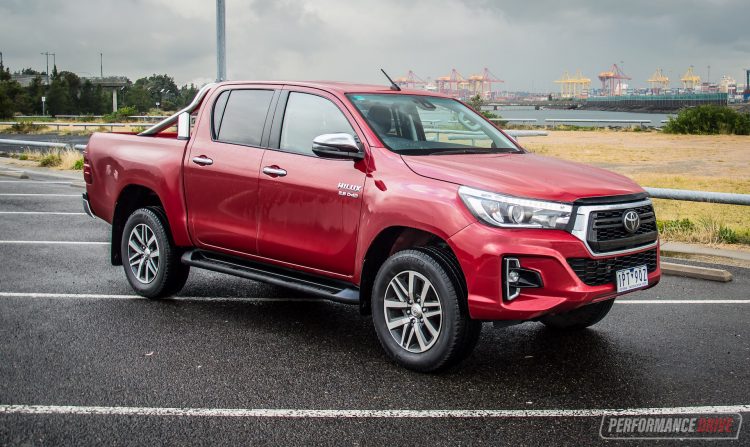 The eighth-gen HiLux has turned into a highly sought-after contender for carting the kids around and for heavy off-roading. But if you don’t need to go serious off road or carry heavy loads, you’d be putting up with that jiggly truck-like ride for nothing. And in that case, we think some of the many SUVs available at the moment are probably a better option for you.

We’re looking forward to the new model in August. In the meantime though you should be able to pick up a bargain run-out deal on the 2020 version. While HiLux prices have historically been pretty high compared with rivals, more and more competitors are popping up and some are actually overtaking the HiLux. This has effectively left the trusty Toyota with a reasonable-looking price tag.

CONS:
– Bouncy ride with no load in the back
– Interior design and plastics are due for an update
– A bit slow compared with most rivals