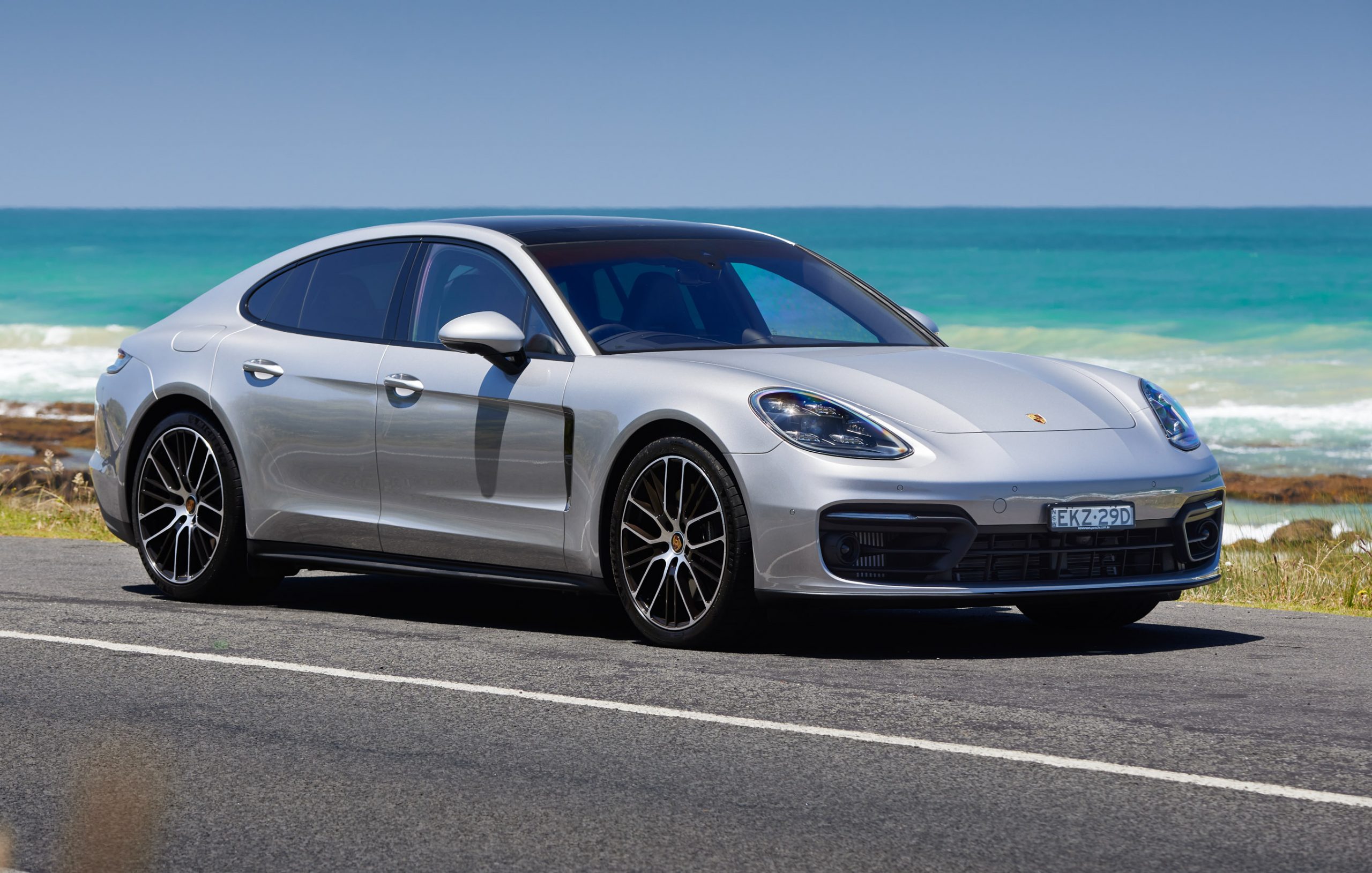 With a new range-topping Turbo S, more economical hybrid iterations in both twin-turbo V6 and V8 forms, and a smartened-up lineup, the 2021 Porsche Panamera reminds us how appealing a luxury sedan layout can be. 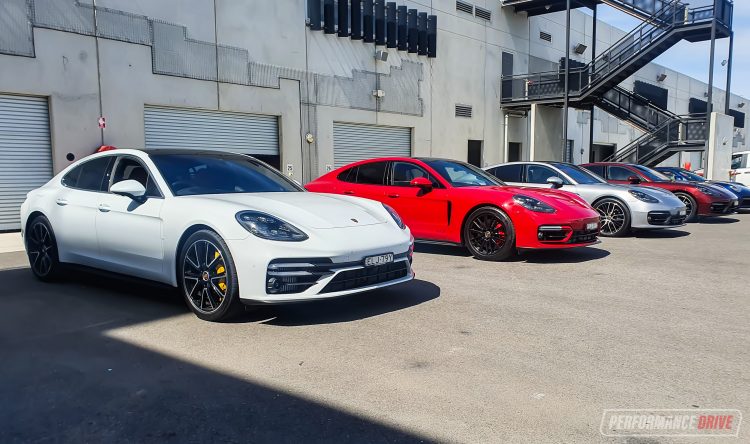 Well, this is actually a four-door coupe due to its hatch tailgate at the back. But you get what we mean. And it’s refreshing to see such an extensive range for a sedan for a change. These days, it’s all about SUVs and crossovers.

Porsche Australia is offering the facelifted 2021 Panamera in a whopping 12 different configurations, including sedan and Sport Turismo wagon layouts. They are, with prices starting from, the following:

During this offical Australian media launch event, only the base 2.9 V6 (silver car, pictured), the GTS (red), and Turbo S (white) were available for us to test. As such, we’ll mainly concentrate on them for this review. 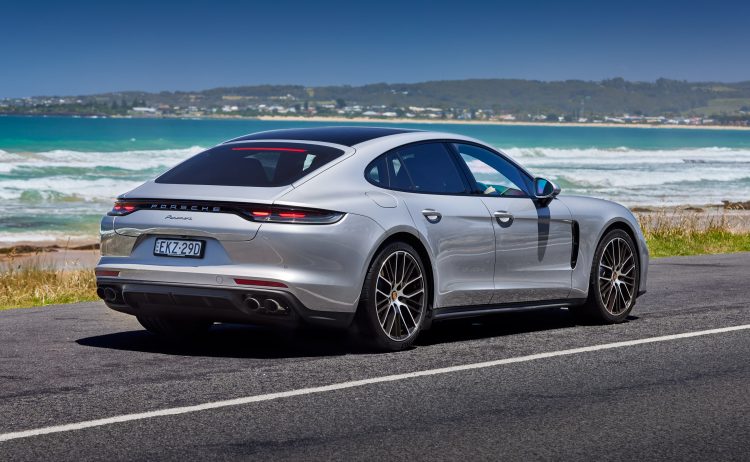 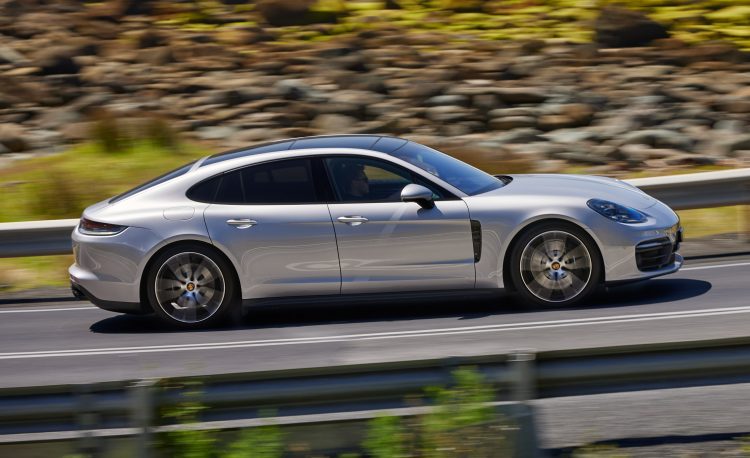 The drive program consisted of driving to and from a racing circuit. Ideal, really, as Porsche says it has a number of customers that have a Panamera that they drive to the track, where they then jump into a more suitable track toy like a 911 GT3. We had a real taste of this lifestyle as the event was also part of the new 911 Turbo and Taycan Turbo launch program. It was nice to dream, if only for a couple of days.

For our journey we took the entry level V6 from Adelaide airport along a more adventurous route, up in the hills, as we made our way to The Bend Motorsport Park racing circuit. One of the first things I need to say is, despite being a ‘base’ model, the entry Panamera is a thoroughly well-packaged and credible luxury-performance machine.

All variants come standard with four-zone climate control, for example, along with adaptive air suspension with Porsche Active Suspension Management, a panoramic sunroof with thermally insulated glass all around, and every ‘comfort and assistance’ system available on the Panamera. There’s even soft-close doors, a power tailgate, head-up display, and adaptive cruise control. We don’t know what’s going on here but, usually, Porsche will charge extra for these kinds of items. 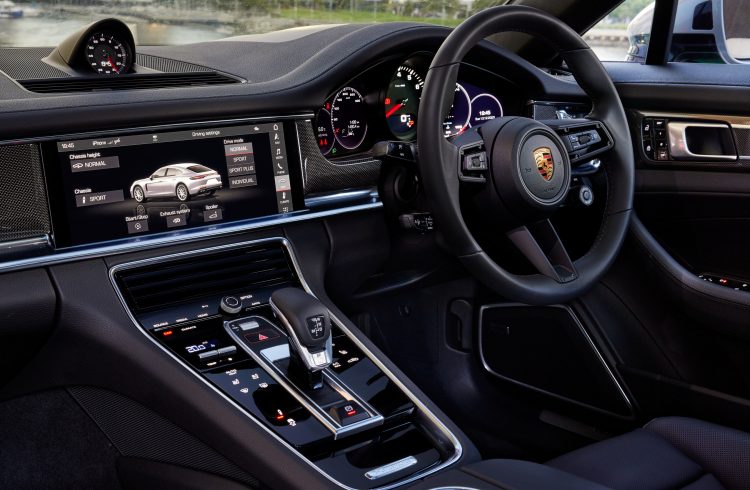 Aside from the lack of a secondary badge on the back – it just says Panamera – you wouldn’t really know this is the base model unless you read the order sheet. We think this is a really good move for this market segment as buyers will be after this sort of stuff, regardless of how far up the corporate ladder/pay packet they are. There’s plenty of gear to show off to the golf buddies, in other words.

Inside, it’s all very Porsche but with hints of upper-premium luxury. The dash is well-forward and flat, and it’s embedded with a nice new 10.9-inch touch-screen that now supports wireless Apple CarPlay. It runs a universal interface which is shared with most other showroom models. That could potentially disappoint some buyers, as it is nothing ‘special’ or out of the ordinary, but it does present crisp graphics and runs a very high quality touch-sensitive glass screen.

The standard 14-speaker Bose sound system is also great, and yep, it’s the standard unit for all model grades. Even the Turbo S. Those wanting more in the audio department can opt for the Burmester 3D surround sound system for an additional $11,200. The test car we drove wasn’t equipped with that so we can’t comment on its performance, but the standard Bose unit already provides a gratifying listening experience. 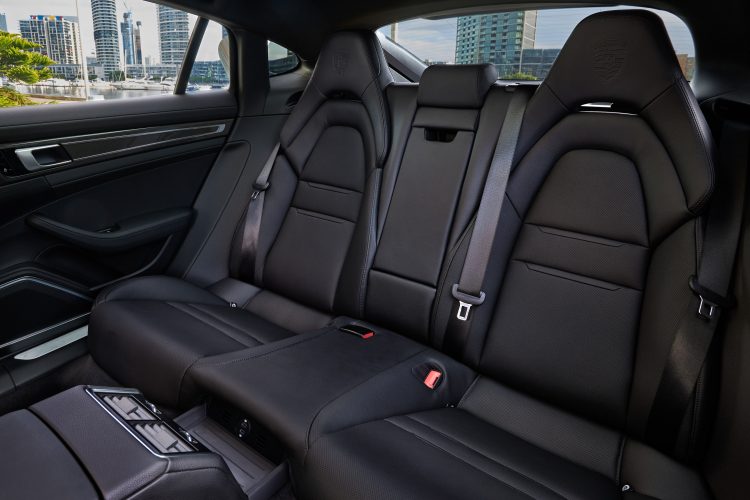 Being a Porsche, there are lots of options to choose from as well. However, after a decent glance over the spec sheet, as far as we can see, most of the stuff on there is a proper step up and beyond what you’d normally expect. Much of it has to do with the trim and interior colour combinations, which is fine as many buyers will probably want a level of personalisation.

Front massage seats ($2200, includes cooling ventilation) are an attractive proposition and an option that you’ll likely utilise quite regularly. Rear-wheel steering ($3750) is an interesting one too, especially for the entry model. We’d also recommend the GT sports steering. It’s lovely. And it’s only $570. The Sport Chrono pack is worth your consideration. Although expensive, at $3950, it gives you selectable driving modes and slashes the claimed 0-100km/h time down from 5.6 to 5.4 seconds.

Speaking of the performance, you might be familiar with this 2.9-litre twin-turbo V6. That’s because it is used in the Cayenne S and the Macan Turbo, and even in some of Audi’s RS models. Here, it is ‘detuned’ to develop 243kW and 450Nm. That doesn’t seem like much. And it’s not, really. But it gets up and goes just fine.

Peak torque is spread very wide and is available from just 1800rpm and held until 5000rpm. In that sense, it’s not as peaky as you might expect. There’s a strong surge pushing you from behind at all times, so it gallops along open roads in a relaxed and unstressed manner. It can also hold onto taller gears and push effortlessly around tighter corners.

It sounds splendid, too, giving off a crackly bellow at low revs, then it turns into a full-bodied howl as the revs climb. Around the Adelaide hills district, with the supple yet bracing air suspension working its magic, the drive experience is both enjoyable and majestic. There’s enough grunt there to get a good pace going, allowing you to maintain a fun tempo in the corners, while the suspension helps to resist body lean while also absorbing road imperfections. 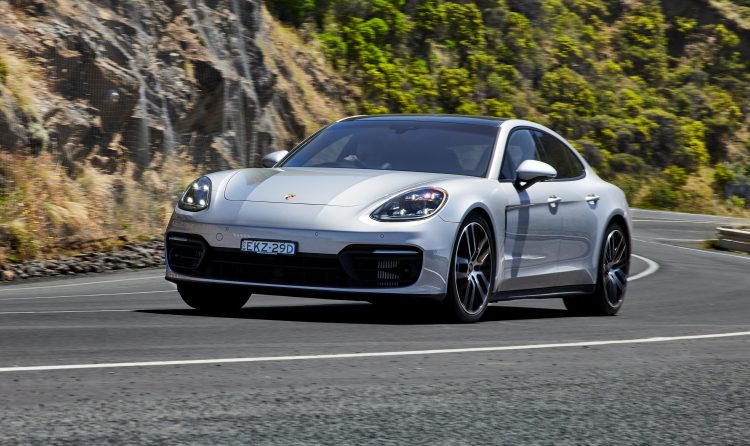 The entry model is the lightest weight of the range, tipping the scales at 1813kg (tare). Part of that is thanks to its rear-wheel drive powertrain layout. Being rear-drive means you can lean on the power earlier in the corners and provoke a hint friskiness from the back end. It’s always very stable and reassuringly confident, though. And of course the steering is just about perfect so all of the important information from the tyres is relayed straight to your fingertips.

One the way back to the airport we drove the GTS. The return route was direct, which meant mainly highway driving. We kind of wished it was the other way around, as the base model would be superb on the highway, even though it was surprisingly agile and exciting in the twisty roads. However, the GTS gets its own air suspension setup (10mm lower), and yes, it is noticeably firmer in comparison. That does mean improved agility, with sharper turn-in and more responsive steering. It’s not busy on the highway. It just feels more planted and secure, which is obviously better when tackling corners. 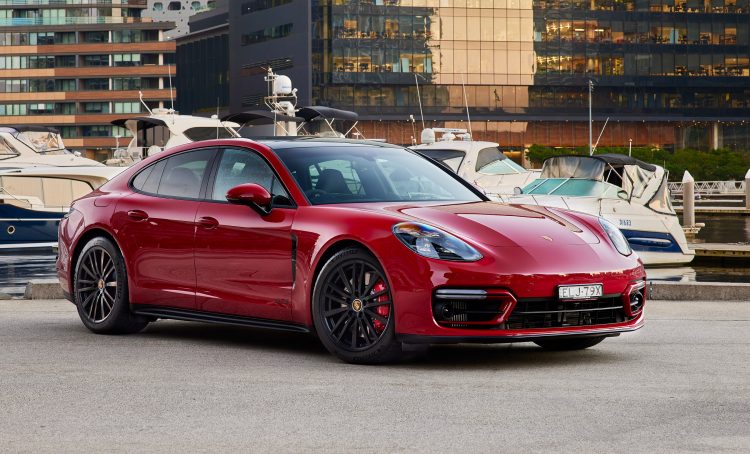 We love the darkened highlights on the GTS, such as the window and light surrounds, but we’re not a fan of the 20-inch black alloy wheels. The design, specifically, looks a bit cheap in our opinion, particularly compared with the sophisticated dual-tone 19s on the entry model, and similar designs on the Turbo S. Of course, there are heaps of other options available.

On the topic of the Turbo S, we managed to sneak in a couple of laps of the top dog on the racing circuit. It was mainly so we could run some acceleration tests and put together a 0-100km/h video for you.

This is the first time the Turbo S name is being used on the latest Panamera, aside from the Turbo S E-Hybrid. The badge is usually reserved only for the really hardcore speed machines from Porsche. So is the Panamera worthy? 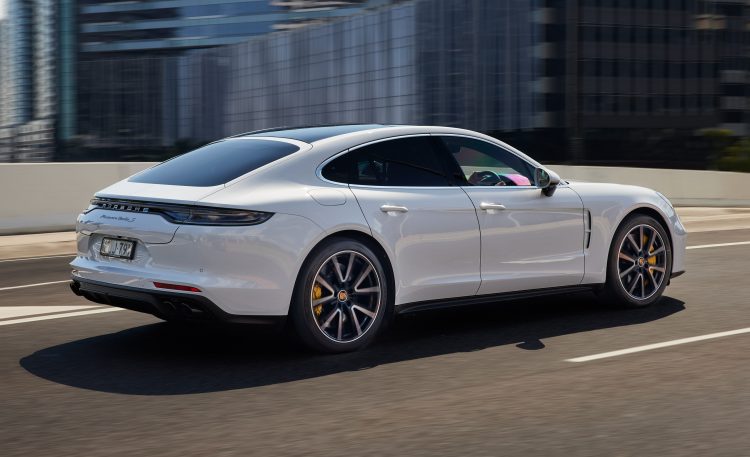 After clocking a Vbox-verified 0-200km/h run of just 11.75 seconds, you quickly realise this definitely deserves the name. Off the mark it generates around 1.3g, which, from behind the wheel, feels incredibly immense on all of your organs. Kick-down performance is equally insane. The range-wide eight-speed dual-clutch transmission is so fast at shifting, it’s hard to believe it is changing gear, really.

And then you have that giant 820Nm tidal wave of torque rushing down to slam you hard in the back. Like it’s just had a massive run-up. Oh, and the sound. Yes please, give us more. It is impossible not to feel completely and instantly addicted to its burbling and roaring ways. This is one of the world’s best engines in our view. The response, the sheer power, the relentless speed it provides; it’s absolutely marvellous.

Although the Panamera Turbo S is not really designed as a track car, it has taken out the Nurburgring lap record for a production executive-class sedan. It lapped the notoriously unforgiving and highly technical German circuit in 7:29.81. That’s the same sort of time as a Mercedes SLS AMG (7:30), which is a serious two-door sports car, and the epic Porsche Carrera GT (7:32), which is a hardcore V10 supercar. You don’t need more validation than that. And for that reason, it’s the variant we like the most.

What. Were you expecting anything else? That’s if money was no object, which it likely isn’t for most buyers at this end of the market. In saying that, you can pay half the money and go for the entry model. It is now much more complete, package-wise, and more refined than ever before. If you are one of the lucky ones driving a Panamera to the track to drive your track car, then you probably don’t need the Turbo S anyway. Keep your licence and wait until you get to the track, but be pampered in the regular Panamera to and from.