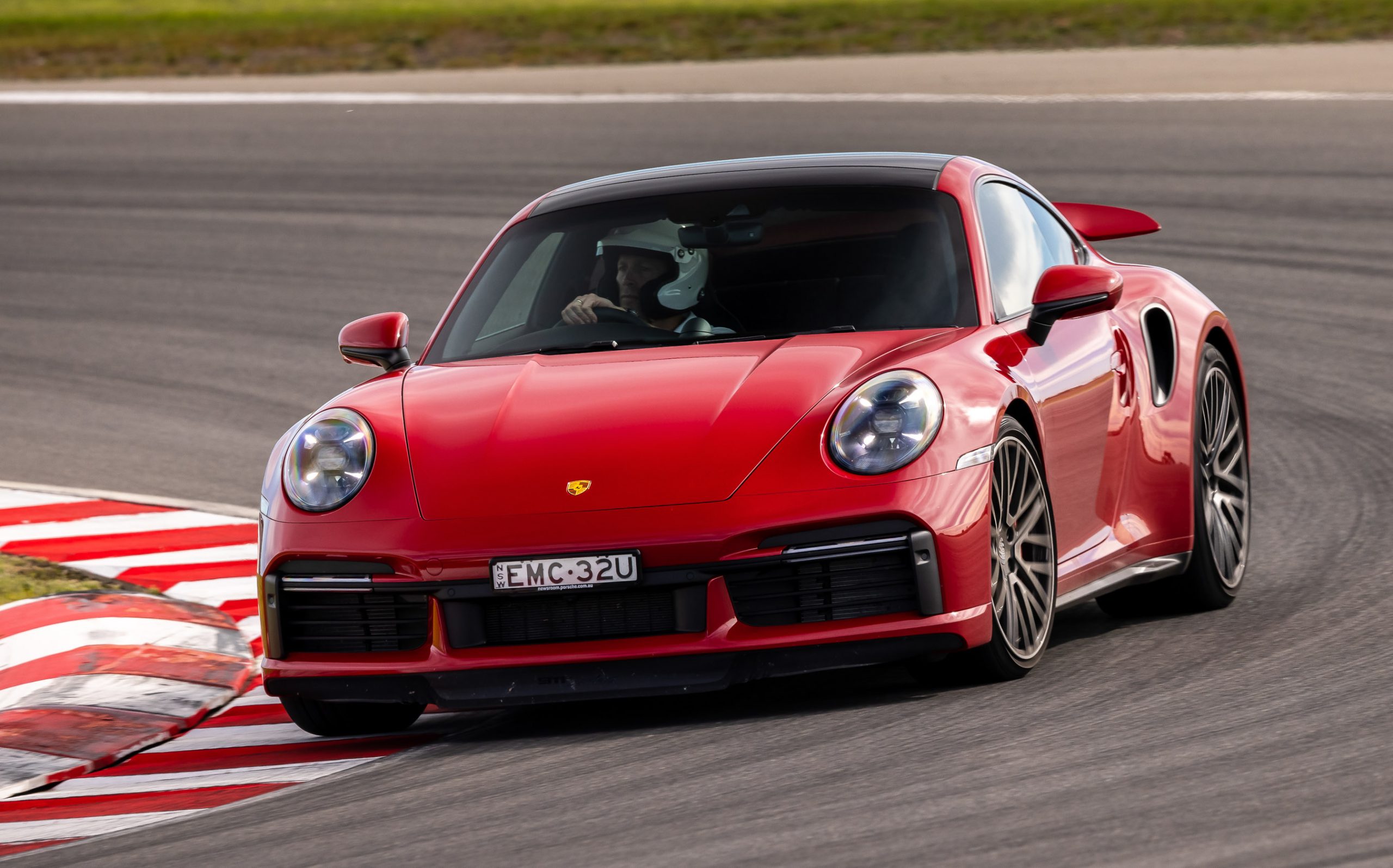 The new king has arrived. It’s bigger, more powerful, and more intelligent than ever. But can the fresh 992 generation Porsche 911 Turbo reset not only the class benchmarks, but also its own benchmark? We’re at The Bend Motorsport Park in South Australia to find out. 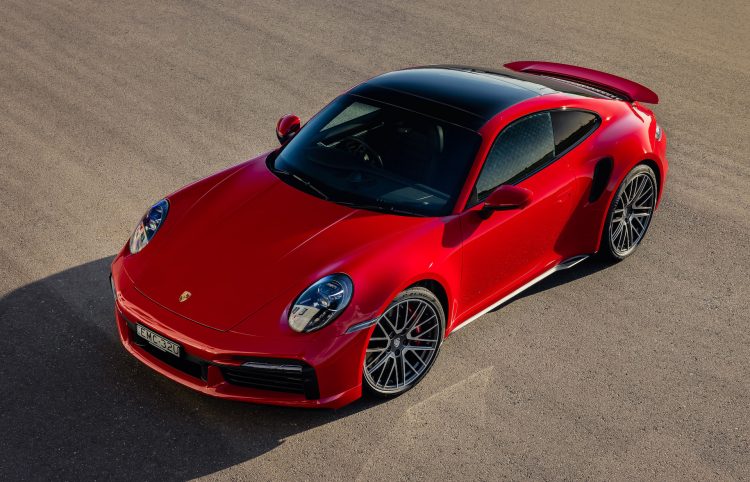 Porsche unveiled the 992 series Turbo S in March last year, before debuting the entry non-S model in July. The company has a habit of doing it like that. Not that it matters, though. It’s purely saying, ‘This is what we can offer. And if that’s too fast or too expensive, we’ll release a slightly watered down version soon.’ 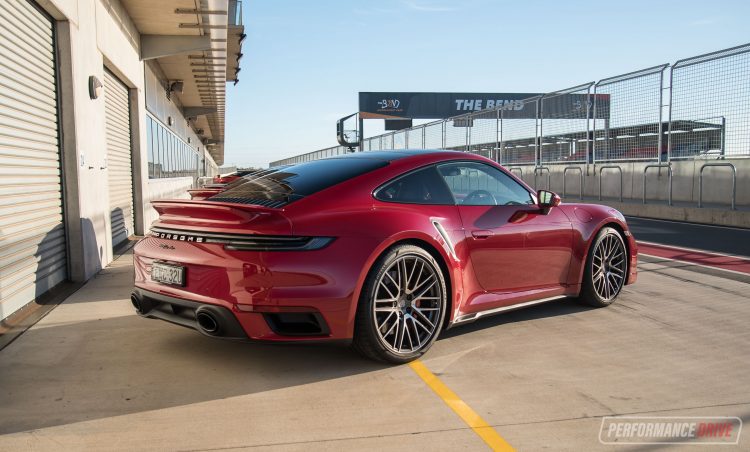 Although peak power is lower, the broader torque spread means this regular Turbo should be more practical in everyday conditions, and perhaps more versatile. With 750Nm though, it pretty much monsters anything you throw at it anyway. As we got to experience out on the track. We were guided by professional racing car drivers employed by Porsche, however, they let us really explore the potential of this legendary machine.

Pulling away from slow corners in third gear is really what impressed us most. You don’t need to shift down if you don’t want to. As this was the first time for me at The Bend circuit, being able to forgo downshifting for the first few laps really helped as I concentrated on learning the course and layout. 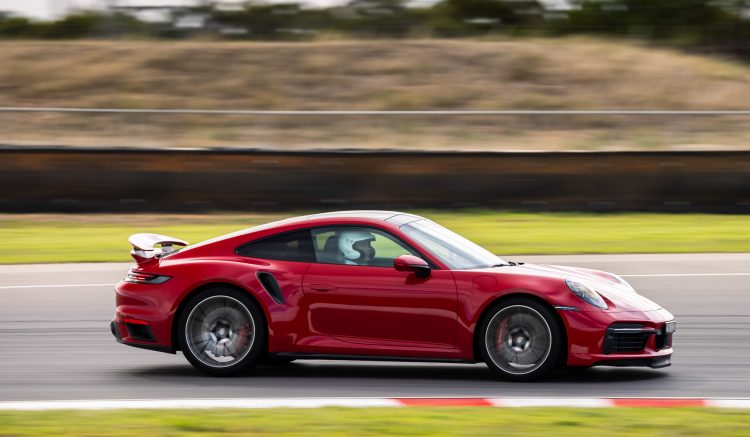 As standard you get the same eight-speed dual-clutch transmission as the S, which offers the quickest auto kick-down we’ve ever experienced. In D, in Sport or Sport Plus mode, the thing automatically kicks down the moment you poke the accelerator. Literally, the moment. We know these dual-clutch transmissions essentially have the next gear (both up and down) already lined up and waiting, but boy the change is fast in this.

There is no hesitation or loading time as the car’s brains calculate what it needs to do to respond to your input. It just does it. As you can probably imagine, using the paddle shifters and selecting the M (manual) mode is as interactive as it gets. Some sports cars, even high end ones, sometimes feel like the car is doing some of the thinking for you. You can hit the paddle shifter and it’ll change down when it’s ready, and if the conditions are right. Not in this. It behaves pretty much like a manual. If you want that gear, it’ll serve it up right away. If you want to hold a gear and bounce on the redline momentarily as you sprint through a switchback, it’ll accommodate that too. 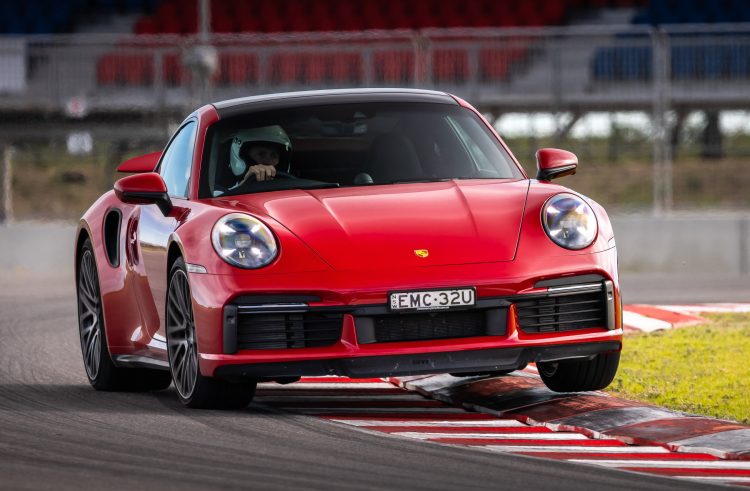 One of the big questions we had circling our mind in the lead up to this drive was, can you feel the difference in power compared with the S? The lower end torque and wider availability of peak torque means it feels almost identical in this portion of the rev range. Coincidentally, we had a 911 Turbo S on test just a couple of weeks prior, and the sensation of that was still in our minds.

It’s not until you explore the top end that things feel different. Even peak power is achieved 250rpm higher. During this launch event we managed to sneak in a couple of acceleration runs with our Racelogic Vbox Sport on the main straight. It clocked 0-100km/h in just 2.85 seconds, and 0-200km/h in 9.35 seconds. In the Turbo S, albeit on a private road in different weather conditions, we clocked the same sprints with the same timing gear in 2.76 seconds and 8.56 seconds. So as you can see, the numbers prove there is a lot more top end here. 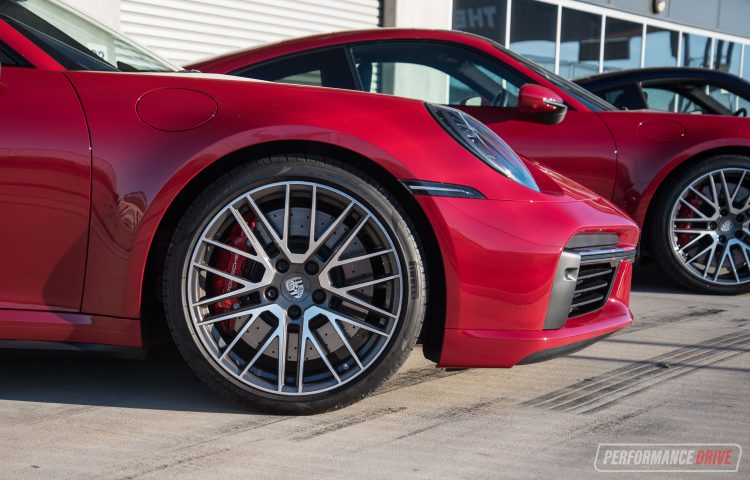 Another area that you do notice is braking performance. The Turbo S comes standard with Porsche’s ceramic composite brake package including gut-hurting 10-piston front calipers on 420mm front discs. These are optional on the Turbo ($20,190). As standard the six-piston front brakes on 408mm steel discs aren’t quite as reassuring. It’s still a Porsche, as to say it pulls your face off when you hit the pedal. But we did notice a stronger bite in the Turbo S, and obviously longevity, especially on a track, is going to be superior.

Around the long sweeping bends on the circuit, the new 911 Turbo is incredibly stable and very predictable. If you start pushing too hard there is some gentle understeer under power, but this can be neutralised by easing off on the throttle a tiny bit. And then it’s back, tucking hard up against the apex.

In the tighter corners you can pounce on the brakes and really play around with the weight distribution, and even provoke the tail to kick out. Sport Plus mode allows some slip and movement, which is great, but it’s never intimidating. Well, the acceleration is but the handling isn’t. The pure and unfiltered feedback through the steering wheel is just bliss, allowing you to manipulate the car’s behaviour to meet your desired outcome. You just want to keep doing more and more laps.

Of course, being a 911 Turbo, there is a genuine practical side of this beast. The seating position and space in the front is more than acceptable. In fact, if you compare it to its nearest rivals in terms of performance and price, nothing comes close to offering this level of comfort and functionality. That’s because most of the competitors are straight up supercars. Focused but uncompromising.

What is compromising in this is the rear seat space. It’s fine for kids but pretty much useless for adults. There is some storage behind the rear seats (and the seats themselves), as well as a deep cavity under the bonnet which is large enough to support a decent weekend away.

The Turbo gets Porsche’s latest 10.9-inch touch-screen media interface inside, running Apple CarPlay, digital radio, surround-view parking cameras, and a 12-speaker sound system as standard. We love the sharp graphics and understated colours, although, the screen can seem a bit sterile and uneventful.

There’s also two 7.0-inch TFT displays within the instrument cluster, with very simple scrolling display themes on each side – you simply use the thumb wheel on the steering to toggle through the displays. Sitting front and centre is of course a bit fat rev counter. And it’s a proper mechanical dial as well, which is the way it always should be. 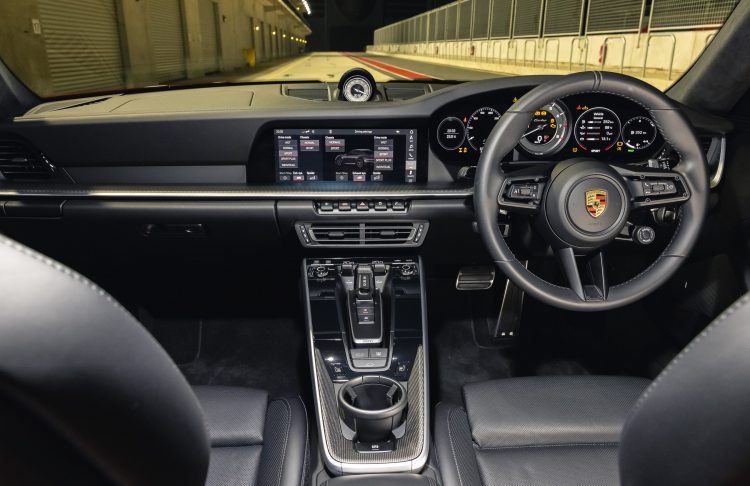 This drive event did not include any driving on the road. But even so, we feel the non-S Turbo would be more practical on the road thanks to its broader torque span. The ride and handling is very similar, but the S does come standard with the Porsche Dynamic Chassis Control package, which is a $6750 option on this. However, the regular Turbo does come with PASM (Porsche Active Suspension Management) which provides adjustable driving modes for an impressive level of versatility.

In the end though if you have the extra $80k why would you not go for the S? It’s faster and a bit more exotic. And that’s all the convincing you need, really. On the other hand, if, like us, you’ve always wanted a 911 Turbo, this regular version is somewhat closer in reach in terms of cost.