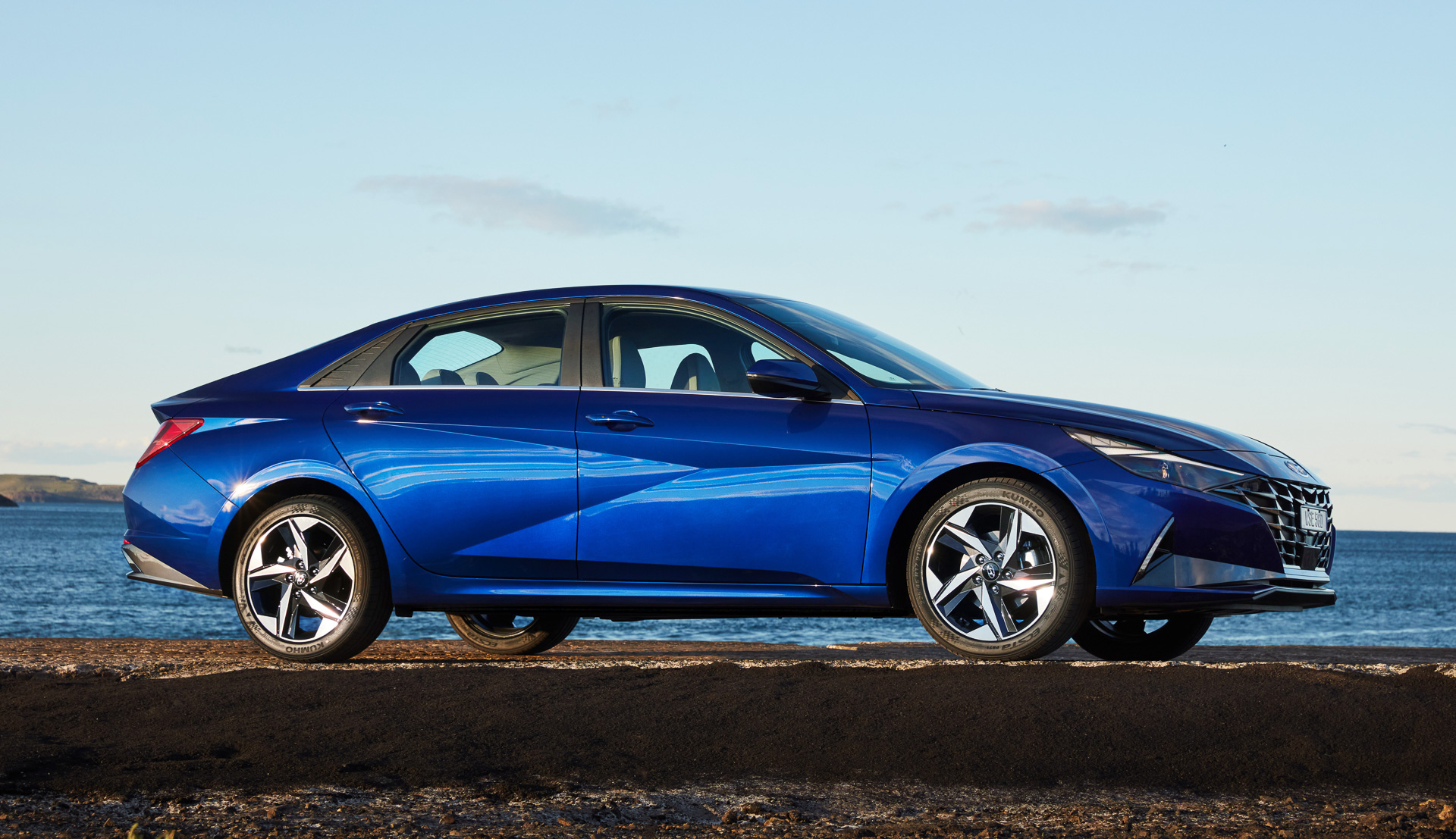 There was a time when the sedan body style not only held dominance in the market, it was pretty much the only body style available. Aside from niche coupes and convertibles. Sales stats have shown customer demand has simply weakened over the decades, prompting some carmakers to delete sedans from their lineup altogether. So what’s Hyundai doing launching a sedan version of its i30? 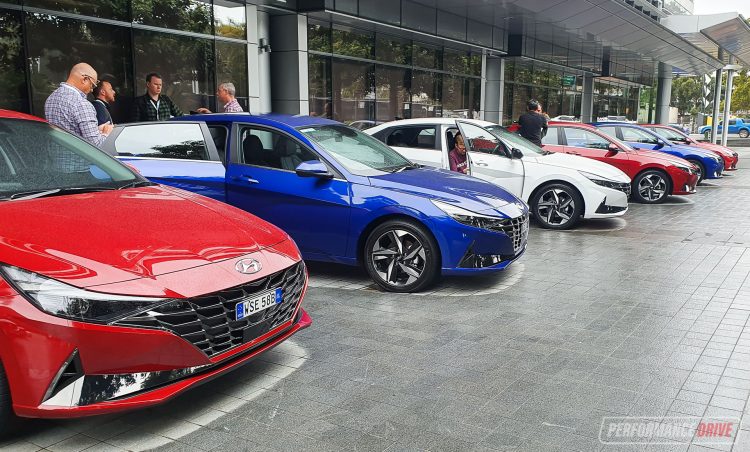 Hyundai hosted the official media launch event for the new i30 sedan this week. We had a chance to sample two of the three trim levels hitting the market; the entry Active and the mid-range Elite. We’re a bit bummed the N Line couldn’t join us, but Hyundai says the first shipments of these are just around the corner. 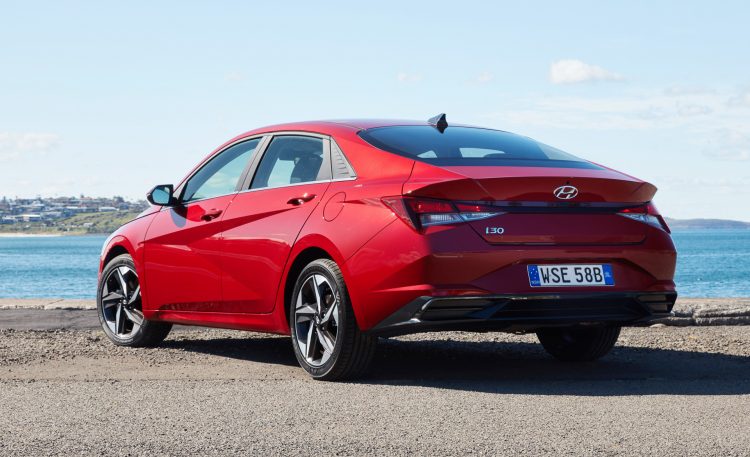 It does borrow the same name as one of Australia’s most popular small hatchbacks, the i30, but the sedan is quite a different vehicle. For starters, it’s based on the company’s latest K3 platform, which is essentially an evolution of the hatchback’s K2 platform. The wheelbase is stretched by 70mm in comparison, and it’s 30mm wider. Interestingly, the roof height is actually 25mm lower on the sedan. So as you can see, even just by the dimensions, this is more than just a booted version of an existing model.

Some of the rivals have been offering both layouts for their propositions for a while, such as the Toyota Corolla sedan, Mazda3, and Honda Civic. And you could say Hyundai has been doing the same, only its sedan has always been called the Elantra. In fact, it still is called the Elantra in its key market, North America. 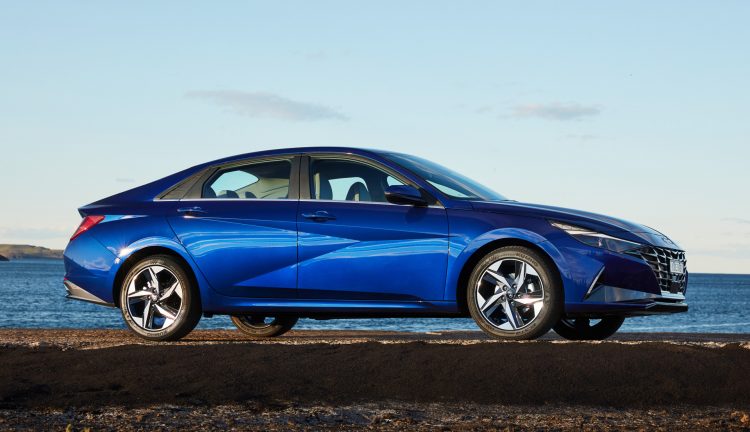 We’re not sure if you’ve seen the new model yet, but we’re sure you’ll agree, this is one striking four-door. And in N Line trim, phwoah. It is really something. Hyundai Australia did have one example that we could check out during this event, but it was a pre-production model and really only here for local tuning. However, in the metal, we can confirm it looks absolutely superb.

Even in Active and Elite form the i30 sedan stands out thanks to its distinctive front grille that’s filled with something Hyundai calls “parametric dynamics”. From some angles the pinched panel contours on the doors are really defined and give the i30 a sophisticated and unique profile. But for us, it’s the rear that really evokes emotion. 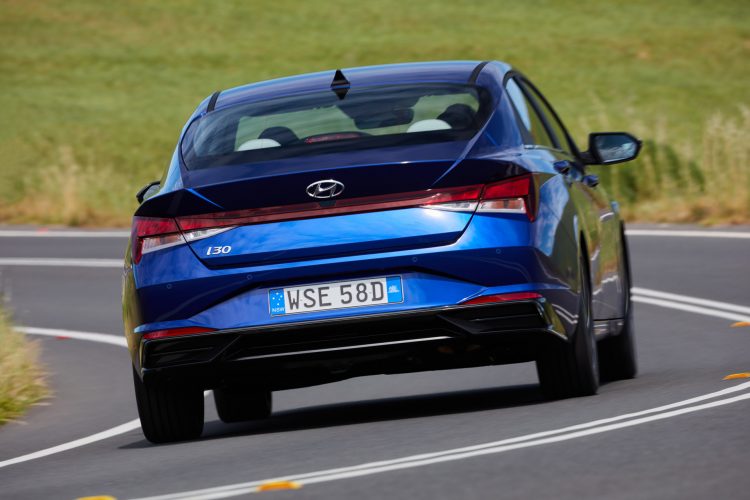 It might seem unusual and pointed in photos, but in the metal the integrated rear spoiler and concave mid-section provides a sharp and very dynamic profile. Unlike some sedans in this segment, we don’t think this is over-designed. Definitely very flamboyant and thought-provoking, but right on the edge of being too busy.

Just like the exterior, Hyundai artists have created an impressive interior. Especially for this market segment. We’re still getting used to the new four-spoke steering wheel, but we love the way the dash sprouts out and submerges the front passengers. The Elite trim and colour combination in particular is a real standout, with fashionably reserved textured fabric on the doors really rounding out the appeal.

It all feels well put together and solid too, and the new aircraft-style gear selector is a nice touch. Visibility is great thanks to a really low-set dash, and even the way the dash drops down quickly helps to provide an increased sense of spaciousness and freedom. We also had no issue glancing over the side mirror on the driver’s side, eliminating what is often a blind-spot in many late-model cars. 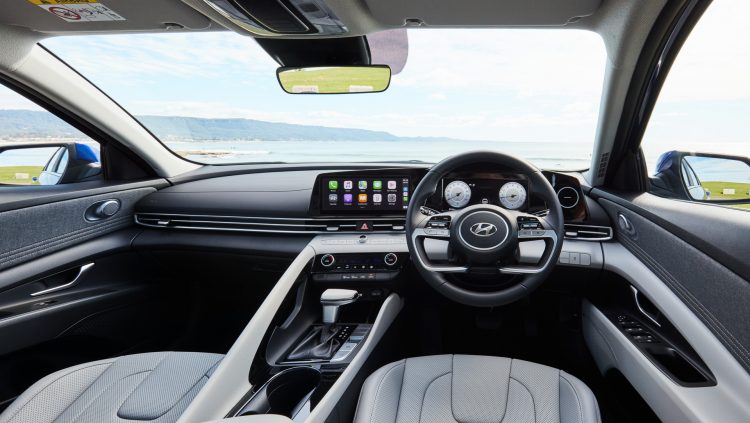 Another neat design element is the full-width climate vent. Although air doesn’t actually exhaust from all the way across, instead, the seamless trim piece effectively increases the perception of space and width. It’s also good to see a proper right-hand drive conversion, with the wrap-around centre console enclosing the driver.

Going for the Elite also introduces twin 10.25-inch digital screens. One is for the common multimedia system, supporting Android Auto and Apple CarPlay, and the other replaces the twin-dial instrument cluster on the Active variant. They are both really nice screens on the Elite, but we feel like there is some wasted space around the instrument cluster.

In the Active the media screen drops down to an 8.0-inch unit, but it still packs Android and Apple connectivity. It’s just a bit dated in terms of graphics and menu functionality. The instrument cluster also makes do with a 4.2-inch screen for the trip information and digital speedo, surrounded by two mechanical dials, as mentioned.

However, due to new ANCAP rules which now require the standard inclusion of a centre airbag, the i30 sedan is expected to meet only four-star credentials. But, structurally and in terms of the active safety tech, this would undoubtably be a five-star car if it were tested last year. 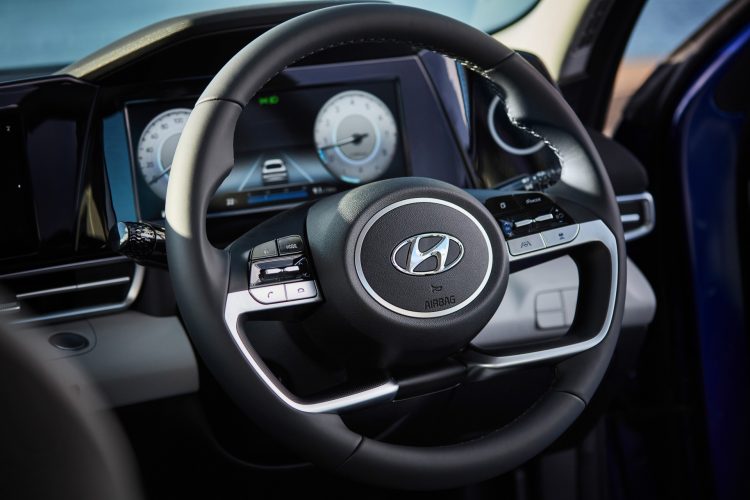 Powering both the Active and Elite is Hyundai’s latest 2.0-litre four-cylinder petrol engine, from the SmartStream family. It features variable valve timing, a continuously variable oil pump, and runs a high compression ratio of 10.8:1. As a result, the unit produces a decent 117kW at 6200rpm, and 191Nm at 4500rpm. Fuel economy on the official combined cycle is a respectable 7.0L/100km.

We only had a chance to test the six-speed auto during this event, but it seems like a decent and easy-going powertrain. The engine is relatively quiet for what it is, and even though the performance won’t win any races, it certainly goes well enough for its intended market. We didn’t get a chance to conduct any performance testing during the event, mainly as it was wet/raining. But if we were to guess the 0-100km/h time, it feels like it does around 9-10 seconds, like the similarly-sized and similarly-powered Kia Cerato. 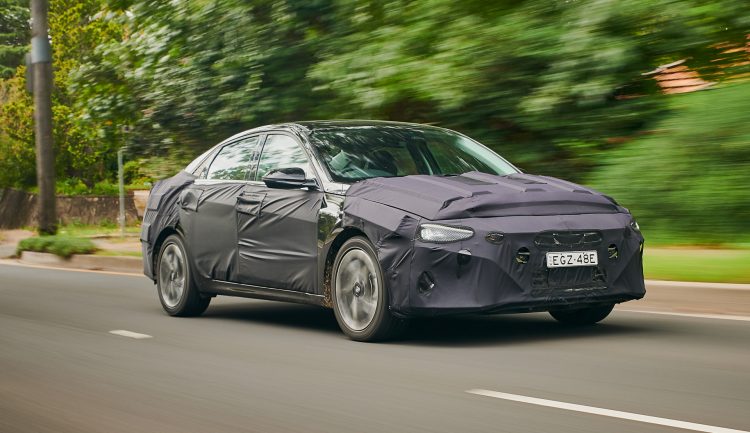 Behind the wheel the new model feels really good. Hyundai has conducted extensive local testing and tuning for the Australian market models, and it feels perfectly suited to our conditions. The suspension is absorbent yet taut enough to maintain body control, and the steering conveys plenty of information in a direct yet friendly manner.

No doubt thanks to the longer wheelbase, the i30 sedan seems to offer superior stability over the hatchback. This should appeal to buyers intending on doing some grand touring. We suspect the centre of gravity is also lower given the car is longer and wider, yet lower overall. The Active and Elite are competent and fairly engaging, so we can only imagine the N Line will be even more compelling. Let alone the full N model that’s in the works.

If you are in the market for a small car, or even a mid-sizer, the new i30 sedan is a convincing package. It presents more interior space than the i30 hatch, and, we think, a nicer interior. However, if you can stretch to the Elite we’d definitely recommend you do that, purely because the interior seems more consistent with the exuberant exterior. Or, even better, hold off until the N Line joins the ranks. It also brings in a 1.6 turbo, with manual and DCT auto options.