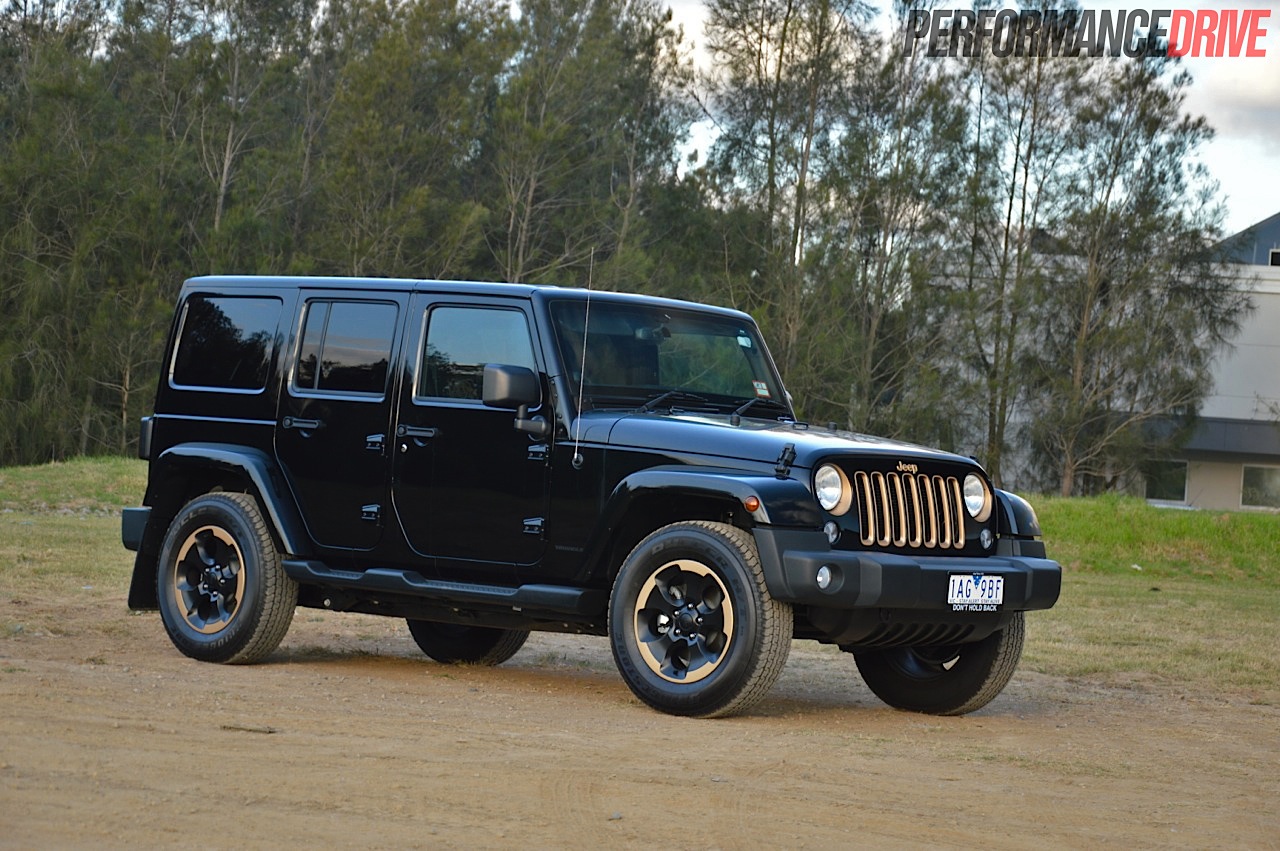 If you had to make a top 10 list of the world’s most iconic and instantly recognisable vehicles, the Jeep Wrangler would have to be right up there. It’s a design and transportation philosophy that has been around now for over 50 years. To spice up the local range Jeep Australia has come up with this, the Dragon limited edition based on the second-from-the-top, Overland. 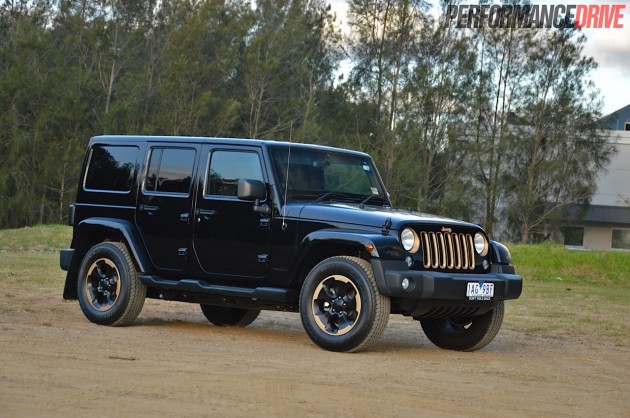 Being a limited edition not only means it’s more exclusive than the run-of-the-mill model, it also brings increased value by means of added kit, and in this case it gives the veteran a fresh look with unique decals and a black and gold colour scheme.

Only one engine is available with the Dragon; Chrysler’s 3.6-litre Pentastar V6 which produces 209kW of power and 347Nm of torque. It’s matched up to a five-speed automatic transmission with part-time (gear lever activation) four-wheel drive.

Prices for the Overland start at $47,000 with the Dragon edition demanding a $4000 premium, starting at $51,000. This makes it the most expensive Wrangler on the market, sitting above the Rubicon which starts at $49,000 for the equivalent auto. You do get more luxury with the Dragon though. 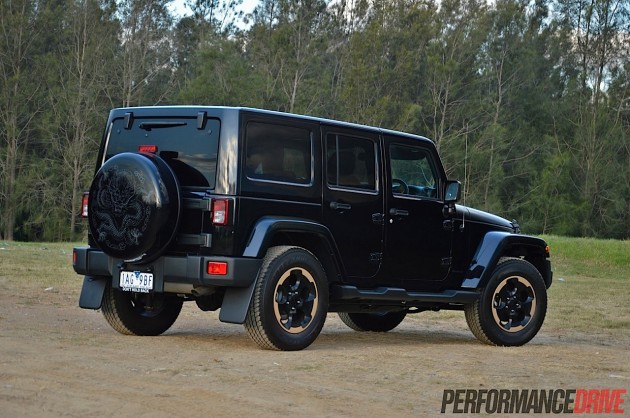 You can’t talk about a Jeep Wrangler without mentioning its legendary history and inspiration which was drawn from the famous Willys Military Jeep (derived from GP; general purpose) from 1941. It’s remarkable that such a big company can keep the same looks and traditional character in today’s world of tightening emissions restrictions, pedestrian safety concerns, and a general frowning upon anything that comes with an internal combustion engine and/or made entirely for fun.

The traditional multi-slot vertical grille at the front, exposed wheel arches, and utilitarian detachable roof are all still here just like they were in the World War II days. Even the old-school bonnet clips remain. We love all of these little details and you will too as they give the vehicle a real personality; it’s a genuine package that’s not trying to be anything other than itself.

There’s a lot of character inside the Wrangler in standard form, with big chunky grab handles, Tonka-tough rotary air vents, and an up and away dash that leaves an airy cabin atmosphere with plenty of storage space. It doesn’t take long to find a spot to place your phone or wallet, and the centre console is large enough to swallow a whole DSLR camera bag.

Some of the plastics used for the dash and centre console are a bit bland and scratchy, but such fixtures are hard and firmly fit and will probably withstand many scuffs and bumps before wearing out. If the surfaces get dirty it’s simply a matter of spray and wipe as there are no delicate suede pieces or intricate patterns to be ruined. The interior is not ultra-modern or flash but it works, and it suits the personality of the car.

Sitting in the dash is Jeep’s latest 6.5-inch touch-screen Uconnect interface with Bluetooth pairing and USB playback. It comes with its own apps and interactive menus, and it can play DVDs and incorporates standard sat-nav. It’s great to see this level of technology in a vehicle that’s usually only seen as a rugged mountain goat. The interface is very good in comparison with other systems on the market, with big clear buttons and crisp graphics.

The Overland comes with a decent level of luxury features too, including heated front seats, live tyre pressure monitoring, a beefy Alpine seven-speaker stereo and sub-woofer, an electronic limited-slip differential (brake type), and a rear-view camera. Despite being equipped with roll-over stability control, traction control, four airbags, and an in-built roll cage system, ANCAP has awarded the Wrangler a four star safety rating instead of the now industry-standard five stars.

Special features for Dragon edition, above the regular Overland, include black Nappa leather seats with snakeskin-style patterns, a smattering of gold on the dash and door trims, and a continued snakeskin/dragonskin pattern across the instrument cluster. There’s also piano black highlights, bespoke floor mats and contrast stitching.

On the outside you’ll notice a big Dragon pattern on one side in faint gold. We’re not really a fan, we’d prefer all black, but it’s something different. There’s also unique 18-inch alloy wheels in Dragon bronze satin gloss, a Mopar fuel filler cap, a Dragon wheel cover on the back, and a range of gold details to match the interior. 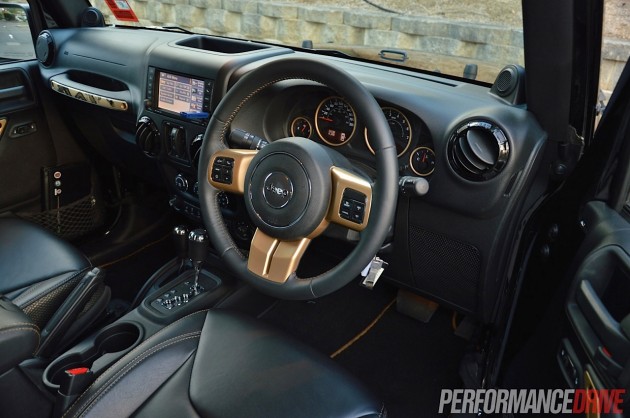 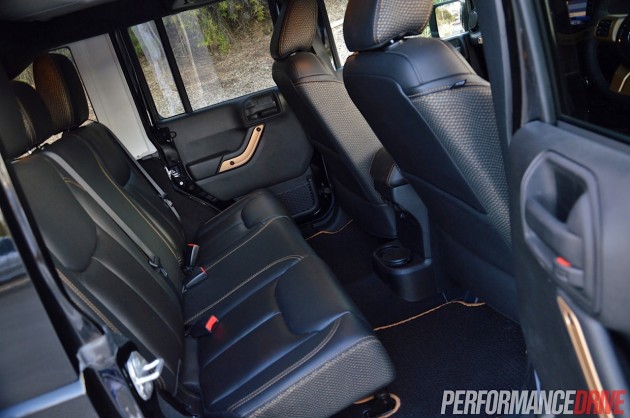 Seating space is good. Up front you sit tall yet the high dash makes you feel like you’re sitting inside the cabin as opposed to on top of it like in some SUVs. You can find a comfortable driving position as well, and there is heaps of headroom.

In the back it’s a similar story. You need to step right up into the rear section and sit high on tall seats. The roll over bars can intrude on access space, depending on how tall you are, however, once you’re in the headroom is more than acceptable.

Cargo space is okay. Some space is restricted by the soft-top flip-up roof and the sub-woofer box. These items do enhance the overall practicality and driving enjoyment, but if you’re after outright space you might consider setting up the vehicle without these items. 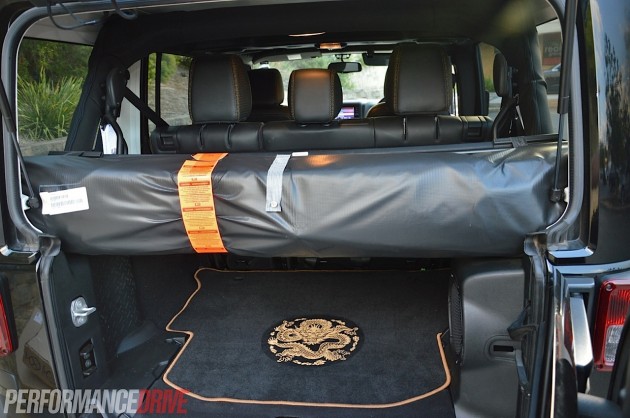 Okay, so the Wrangler is not the best-handling SUV you can buy, nor is the ride the supplest out there. The suspension can be jiggly and firm on average back roads and there is noticeable body roll and slow-speed tyre squeal going around roundabouts. But in fairness, there aren’t many proper off-roaders that present much better.

(We have driven the top-spec Rubicon with its detachable sway bars, and while it is superior off road it isn’t as stable or comfortable on the road. This regular Wrangler setup is much more suitable for a wider range of conditions and on-road duties.)

The sheer amount of turns lock to lock means when you’re in a carpark winding the wheel like Captain Cook, reversing and shuffling about, it can get tiresome. The turning circle isn’t that wide either which means you have to turn back and forth more than you would in a regular SUV.

Out on the highway it’s pleasant and feels solid. Road noise isn’t too bad considering the large off-road tyres and high 223mm ground clearance, and the cabin is relatively quiet even though most of the roof is held down with hex key bolts. In saying that, there are other SUVs out there that are more suitable for extended highway journeys.

Power from the V6 is punchy and responsive. It prefers to rev out and it sounds raspy and pungent doing it. Torque is not all that tractable as you need to rev the engine to reach its peak output. Specifically, 4300rpm, which is quite high.

Overtaking maneuvers are easily performed and it doesn’t take much throttle input to provoke a downshift. You won’t mind this if you’re a bit of a leadfoot but it can feel a little harsh and negligent at times when you simply want a little more oomph without wanting it to kick down. It would benefit from a six-speed auto to spread out some of the torque.

In terms of performance, we timed 0-100km/h in 9.0 seconds. It’s not as quick as the 200kW Toyota FJ Cruiser (8.2 seconds) but quite a lot quicker than the Mitsubishi Challenger (11.6 seconds) which is only available with a 131kW turbo-diesel. 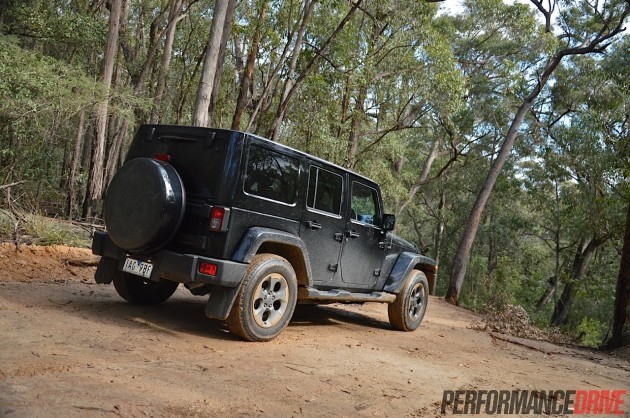 In the Wrangler’s natural habitat, off the road, it’s a natural. The suspension does well to soak up big ruts and corrugations, and the relaxed steering sensitivity means bumps don’t throw the steering and steering wheel all over the place (no need to keep those thumbs out).

The 35-degree approach angle is excellent for tackling sudden climbs, and even if the nose does scrub a bit there’s a large protection plate underneath that’s happy to absorb contact. The 28-degree departure angle is just as impressive.

Without a front limited-slip differential really rough terrain can be tricky, especially in wet and slippery conditions. There is no centre diff lock either, like what is featured on its main rivals. Despite these setbacks we had no major trouble getting through difficult bits of terrain during our test.

Aside from the Wrangler’s ability to conquer most conditions, the Dragon edition feels cool to drive. With the black colour scheme and black tinted windows, it can be fun to give it a bath and go for a cruise at night in the city. It gets more than a few looks from other motorists and pedestrians. 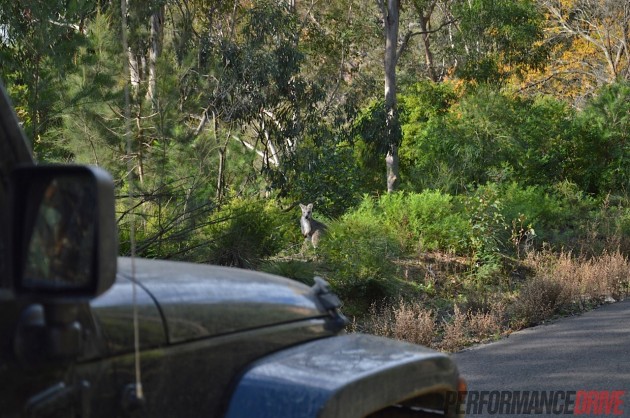 This is a really likeable product. Whether you’re going out for dinner in the city or playing in the mud on a weekend camping trip, it manages to bring joy to a variety of situations.

We’re not much of a fan of the dragon decal down the side of the body or the gold highlights inside, but we love the sinister black theme and dark alloy wheels. We also love the surprisingly luxurious and well-equipped interior.

Should you buy a Jeep Wrangler? There’s only one other vehicle on the market that brings this kind of character and fun to the SUV segment and that’s our old friend the Toyota FJ Cruiser. The Jeep has more of a history backing it, and the engine is slightly more powerful. With the benefit of a removable roof and four proper doors, the Jeep has a lot to offer for a wider range of motoring enthusiasts.

If you’re after pure off-road ability and more on-road comfort we’d also recommend checking out the Mitsubishi Challenger. It’s armed with one of the best off-road drivelines available this side of $50k in our opinion, although, it doesn’t offer the same level of character or charisma as the Wrangler. 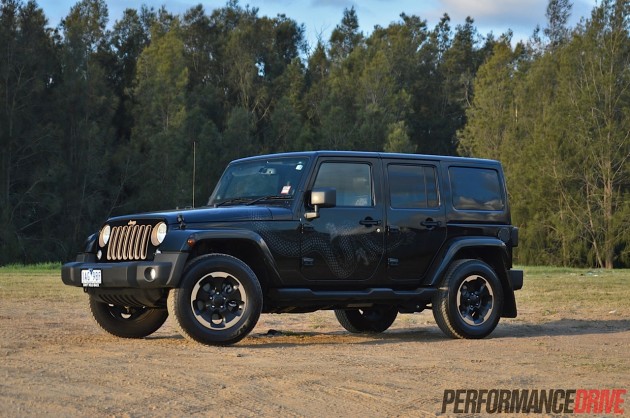