Bluebird Team, using a custom-made ‘Bluebird Electric’, have announced they are aiming to break the world land speed record for an electric car and hope to go past the 500mph-barrior (805km/h) in the next few years. Who said electric cars were boring? 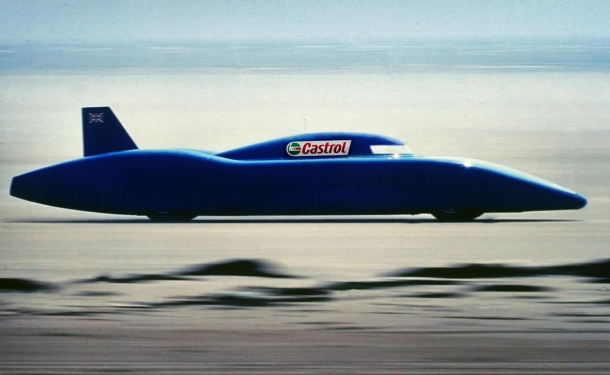 Now normally, electric vehicles are slow, pretty boring and trod about silently at small km/h. However, we will soon have to accept that these things very probably could be a way of the future. On the bright side, Bluebird Team is proving just because a car is electric, doesn’t always mean it has to be boring.

The Bluebird Electric is propelled by a two direct-drive motors which are hooked up to the rear wheels. These motors are powered by 48 batteries, no less, which provide a total of around 100kW and 70Nm of torque. It doesn’t sound like much but the car’s body is so aerodynamic that it doesn’t need thousands of horsepower.

The car is also quite light in weight, weighing in at 860kg, thanks to a tubular steel space frame chassis and an aluminium body. The co-efficient drag is rated at just 0.15Cd – an average sports car is rated at around 0.32Cd.