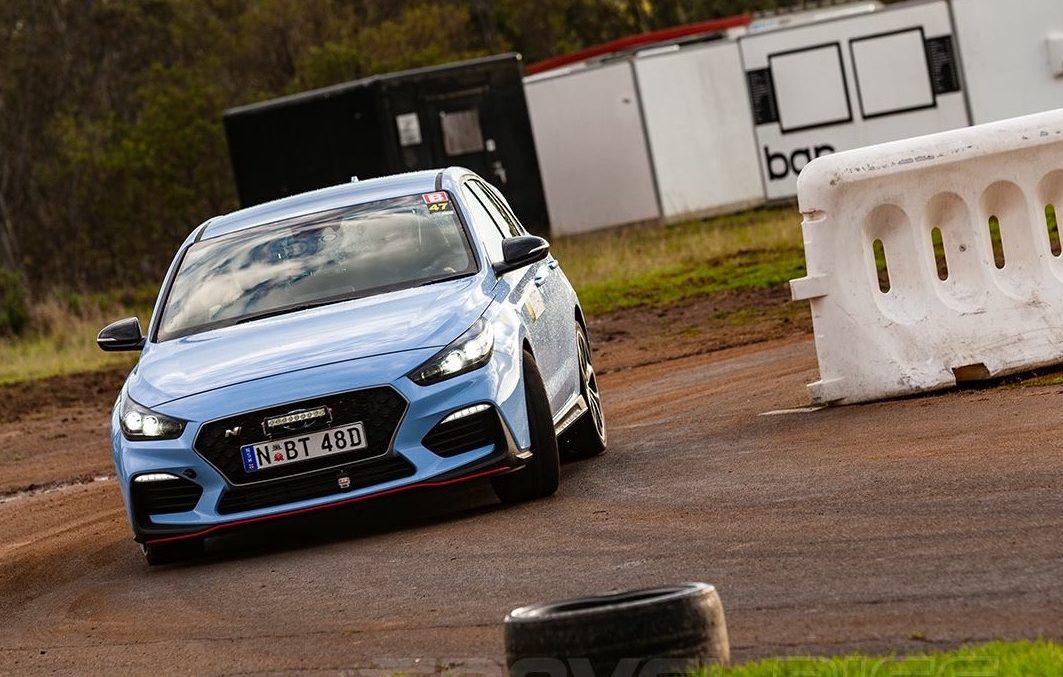 You’ve probably heard sayings like ‘race on Sunday, drive to work on Monday’. Well, Hyundai Australia invited us to put that theory into practice with the new Hyundai i30 N hot hatch by competing in the first round of the Whiteline Twilight Tarmac Rallysprint, within the grounds of Sydney International Dragway. 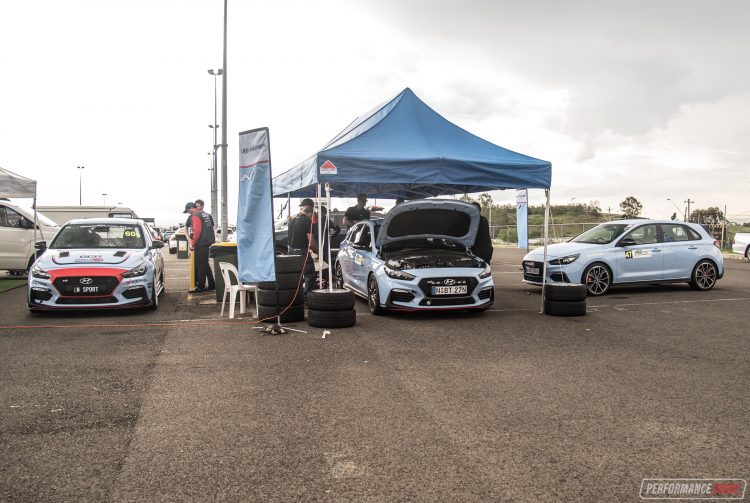 The Rallysprint is a five-round series organised by the North Shore Sporting Car Club, run as a Level 1 Single Club Rallysprint event requiring a CAMS racing licence. It is grassroots racing at its best, giving driving fans the opportunity to enter their vehicles with as little restriction as possible. You don’t even need a road licence or a road-legal vehicle, although 14 years is the minimum age and cars do have to pass through scrutineering.

Hyundai Australia set up a little team base at the first round last Thursday night, with three i30 N vehicles competing. The ‘number 1’ car of the team (actually #18) was a highly modifying example showcasing the potential of the i30 N, featuring a larger turbo, modified engine computer, custom suspension, a partially stripped out interior with a full roll cage, bucket seats, and an extravagant aero kit including a massive TCR-style rear wing. It’s a project collaboration between Street FX Motorsport and Hyundai Australia, and produces around 220kW at the wheels. 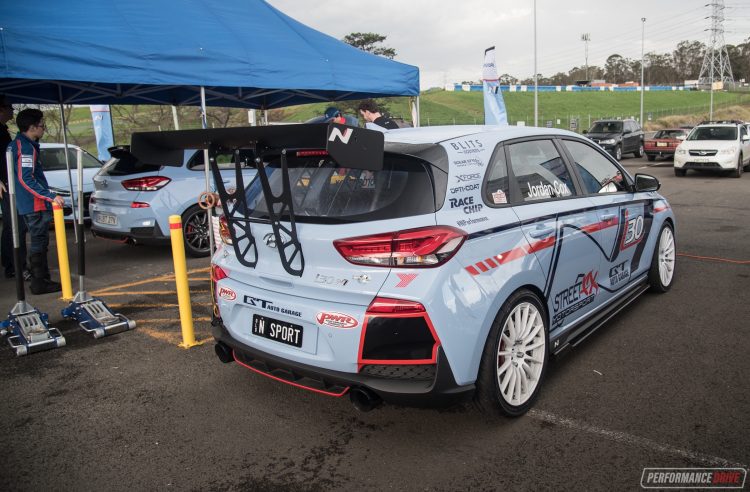 Sitting in as the ‘number 2’ car for the team (actually #19) was a pre-production prototype. This was the vehicle that Hyundai Australia’s local engineering team used to hone the i30 N for Aussie conditions. Its specifications are pretty much identical to the showroom version, however, some very minor styling changes provide some clues. 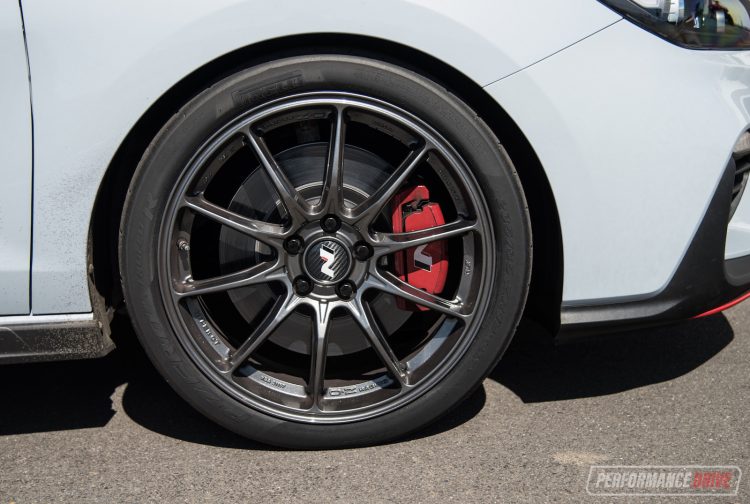 For example, the i30 N badge on the back is on the right-hand side while on the production version it’s on the left. A special LED light bar is also installed neatly behind the front grille and helped out during night testing. For this event this vehicle was also fitted with some super-sticky Pirelli Trofeo R tyres, while the brake pads were switched to some racier compound versions. 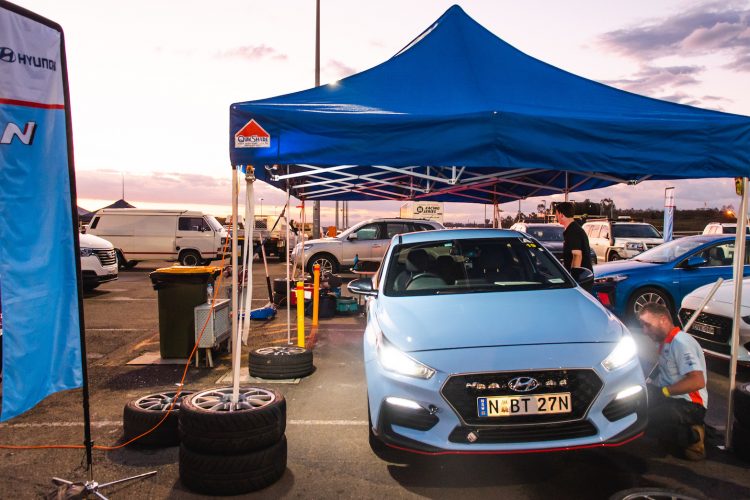 As for the ‘number 3’ car (actually #47), this was a full production model. And this is the car assigned to PerformanceDrive, with yours truly behind the wheel and our contributor and co-founder Josh Bennis sitting in as co-pilot. 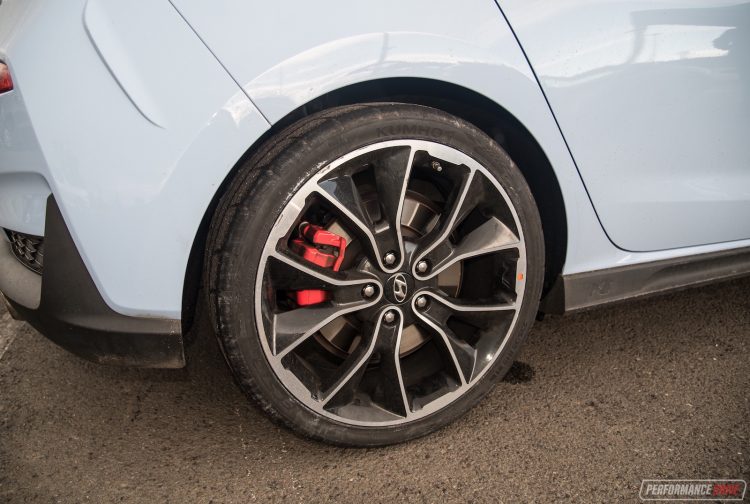 It’s a standard car except for the inclusion of a fire extinguisher in the passenger foot well, an LED light bar attached to the front end, and the fitment of Kumho Ecsta V720 road-legal track tyres. These are a step up from the standard Pirelli P-Zero tyres but apparently a bit behind the Pirelli Trofeo R tyres. According to the Hyundai engineers the Trofeo R tyres require more serious warming up though, while the Kumho hoops are ready to go more readily. Everything else is in standard showroom specification. 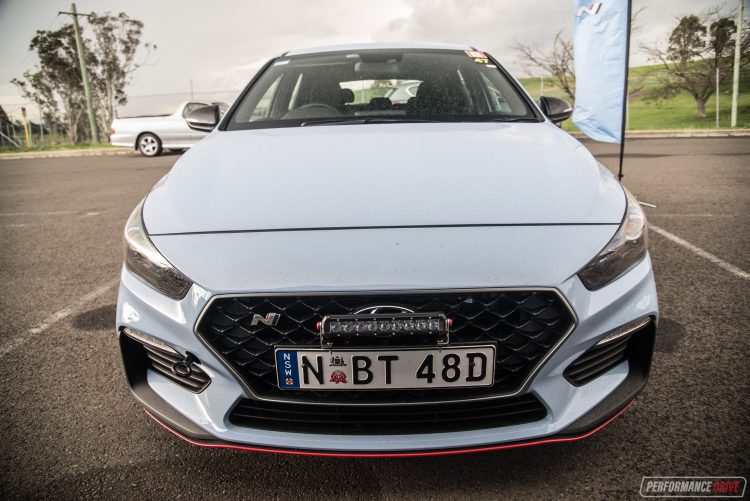 The Rallysprint event uses a makeshift track that’s set up around the grounds of Sydney International Dragway, just next-door to Sydney Motorsport Park. In the first round it included a series of zigzags through the carpark, before a series of chicanes, and then along the access road to the drag strip, around a roundabout, and then returning down the actual drag strip via another chicane. Overall, it’s a 3.5km run.

For this sort of circuit you need a very agile vehicle that has a lot of low-speed grip between the vigorous turns. But it also favours vehicles that have a lot of grunt and acceleration, allowing you to gather maximum speed down the straight sections. Excellent brakes are also a necessity as the circuit layout demands very heavy braking at certain points.

As we found out during the official media launch of the i30 N at Winton Raceway, the i30 N offers outstanding track longevity. We all tortured the test cars around the circuit, all day, without any major signs of excessive wear, deterioration, or even brake fade. 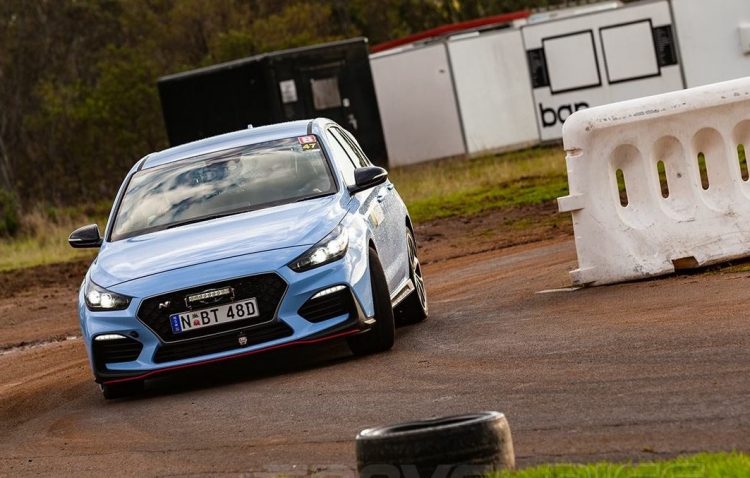 So, the first run. After a single sighting lap at a limited speed, this, for me, was all about learning the track, and learning the grip levels through all sections. Fortunately, it was late afternoon, which gave us optimum visibility to soak up everything we could. To throw a spanner in the works it bucketed down rain for about 15 minutes just as the first runs commenced. This left dirt and mud, and standing water, throughout the circuit. In the end we clocked a 2:37 stint.

Pumped and ready to take on the second run, we went for a quick warm up around a designated section in the car park. By the time it was our turn to approach the start line though the tyres had probably cooled down somewhat. Nonetheless, we took off with a great start, not too much wheelspin but just enough to build the revs and warm the tyres. It was still a learning lap but we managed to improve to 2:26. By this run Hyundai’s test driver and rally driver Brendan Reeves in the pre-production model clocked a 2:30 and then 2:20. The highly modified car ran 2:35 and then 2:20 with Hyundai’s Jordan Cox behind the wheel. 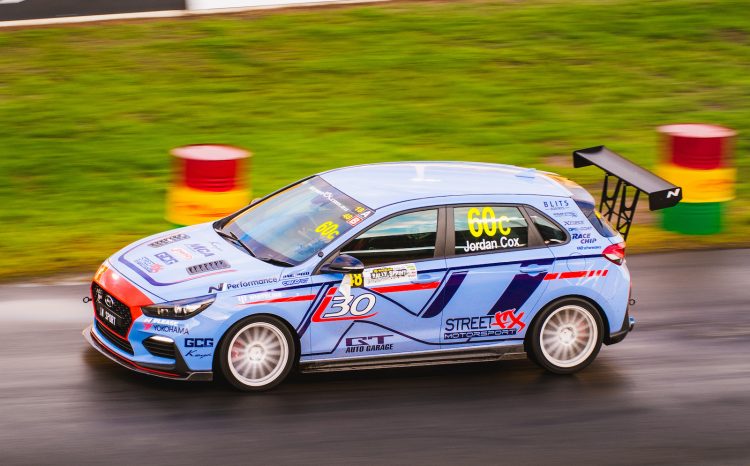 The third run. It’s getting serious know. We know the circuit pretty well in terms of when to go left and right, and the surface had pretty much dried up, albeit with some scattered dirt in sections. However, the sun had disappeared and we switched to high-beams with the LED light bar providing extra peripheral vision. Down the straights we were now confident enough to jump on the brakes much later and maintain speed around the following corners. Across the line, we managed 2:22.

Eager to drop below the 2:20 mark, we had a good think about what areas could be improved, where the tyres could be stretched, and what better lines we could take. But surprisingly, the car itself was holding up just fine. The brakes across the finish line felt as good as they did on the start line, and the clutch and transmission behaved flawlessly. 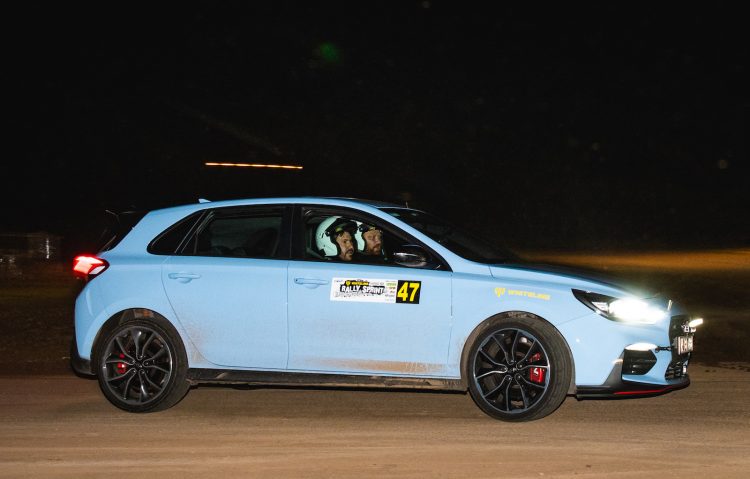 On the fourth run we took off with an excellent start, turning into the first corner carrying optimum speed. We used more of the road on every turn, and pretty much eliminated any ‘double-braking’ we were doing in the learning laps. It was simply a matter of jumping on the brakes once, turn in, and nail the throttle. We did have a little moment of oversteer flying into the last hairpin, coming in hot at around 160-170km/h mark, but the i30 N was very easy to manage. And being front-wheel drive with a limited-slip diff, it was just a matter of pointing the front wheels where we wanted to go and feeding in full throttle during the slide. Across the line, the clock stopped in 2:19.2. We did it.

By the fifth run some competitors and spectators had left or were packing up to leave. Keep in mind this was around 11:30pm. Twilight racing? It should be called midnight racing. I was keen to round out the day with a neat and tidy run. But, on the other hand, I didn’t want my time to be slower as it wouldn’t look as good on the overall timecard. So, we ended up going flatout again, cutting corners a little bit finer, braking a little bit later, and taking a better line in some areas. It felt pretty good. Although, I stuffed up one corner by coming in too hot, and then wiping off too much speed for the following corner. However, joy of joys, we clocked yet another improvement of 2:18.3.

We think the car could definitely go a bit quicker, even with these tyres which were starting to wear by now. With a combination of perfect lines and carrying maximum speed through every turn, getting every corner spot on, we think a 2:15 would be possible. For reference, the pre-production model with Brendan Reeves ran 2:19.5, 2:16.1, and then a 2:14.6, although with the superior tyres. The modified version wasn’t able to improve much on this, with the last three runs set at 2:16.9, 2:15.6 and 2:13.5. And this was despite having 220kW at the wheels compared with the standard car’s 202kW at the engine (about 170-180kW at the wheels). Overall, we placed 26th for the day, out of 78 finishers, which we’re very happy with considering most of the cars in front were all-wheel drive WRXs and Mitsubishi Evos. (The overall placing is made up of your best three runs – click here for the full results). 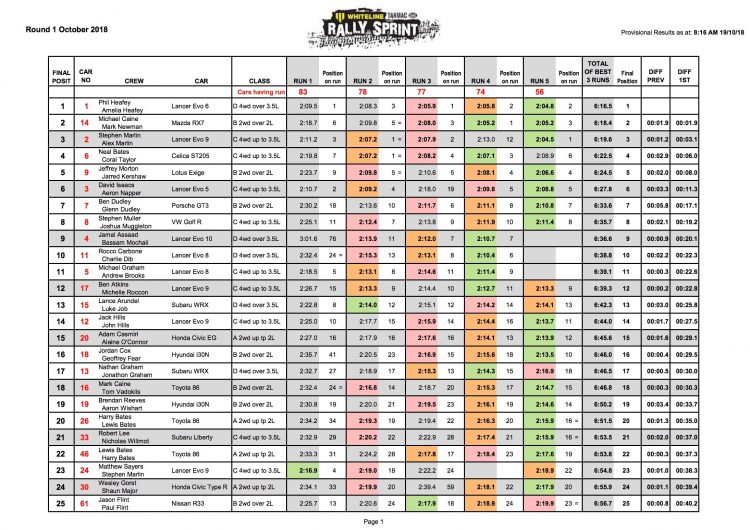 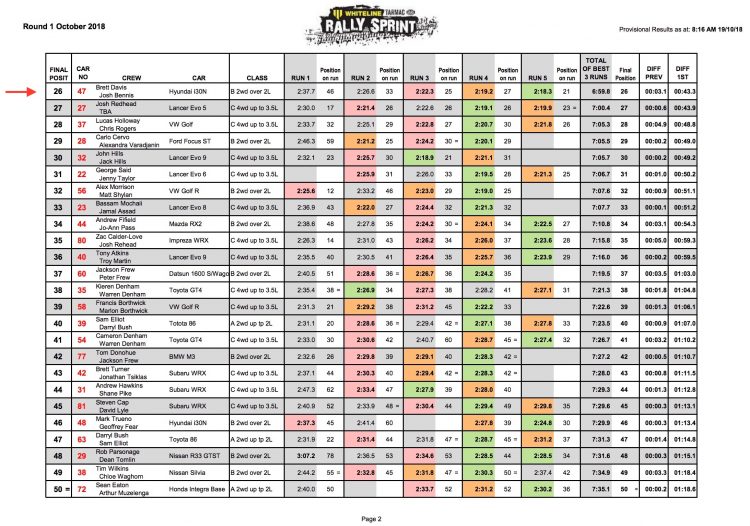 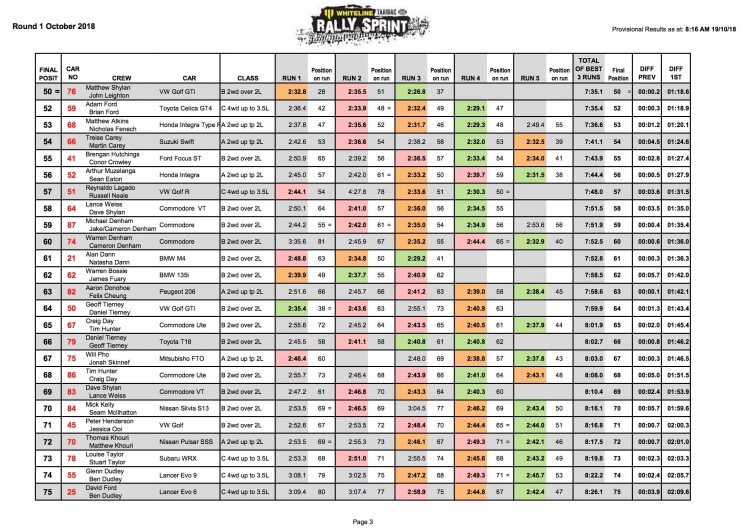 During our runs we had all vehicle settings in Sport Plus mode, except the suspension in Sport (as it is quite bumpy on some parts of the circuit), with the steering feel in Normal (simply because it feels nicer to me). We also had the differential in Sport mode, with the stability and traction control completely off for all five runs.

This is an awesome result for Hyundai we think. We you look up the leaderboard and see what kind of cars were quicker (and most of them were highly modified), it’s very obvious just how well sorted the i30 N really is. And yes, we then drove the car home and to work the next day with absolutely no compromise or issue whatsoever. It’s also interesting to note that we used about a quarter of a tank of fuel during the entire evening. 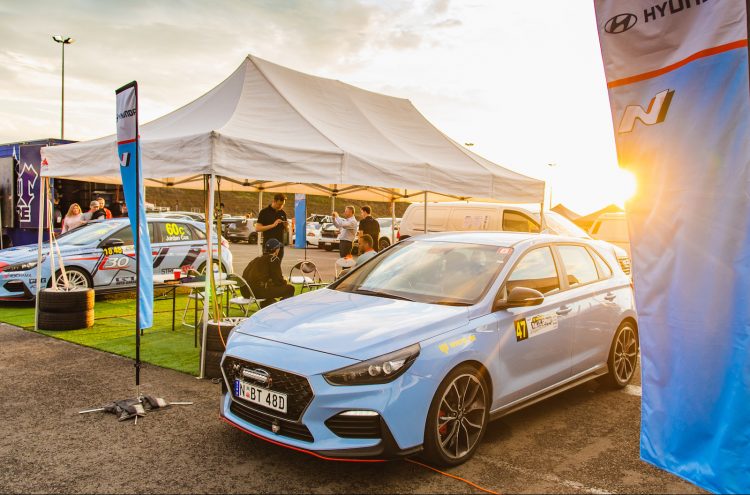 Unfortunately, we tried to put together a video for you but we weren’t quite prepared for how dark it gets. The on-board lap videos are almost completely black, with only splashes of light at some sections. If Hyundai invites us to another round we’ll be sure to put together a nice full lap video for you, with shots inside and trackside, and during the first runs while the sun is still up.

If you are interested in competing the Whiteline Twilight Tarmac Rallysprint it is quite easy to get involved. You simply have to be a member of a car club and then you can buy a CAMS race licence on the day (the cost for the day pass also contributes to a full year licence if you decide to take on more events). And then the entry price for your car starts at $220. For more information head over to the official Rallysprint website.