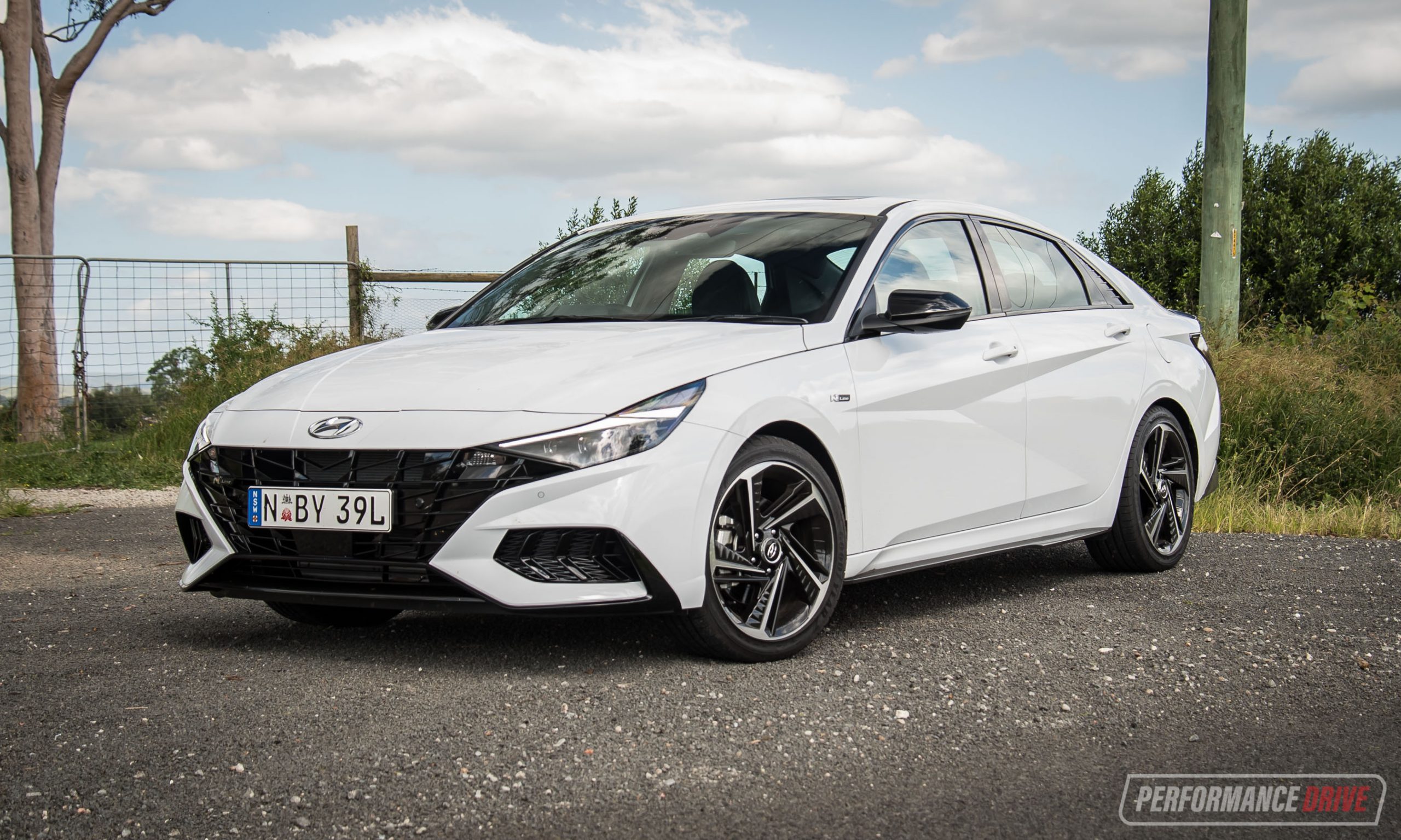 Ah, the humble sedan. Hang on. There doesn’t seem to be anything humble about this one. It’s the striking 2021 Hyundai i30 Sedan N Line. Otherwise known as the i30 N Line Sedan, Elantra N Line, and Avante N Line. 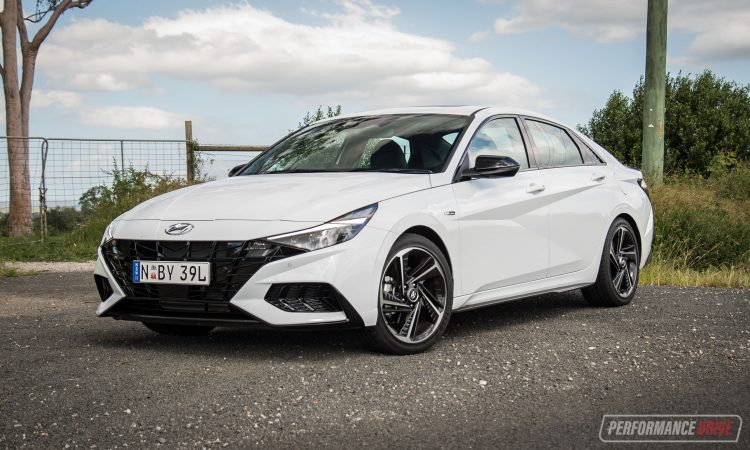 It doesn’t matter what you want to call it, it is a breath of fresh, turbocharged air for the once-cherished-and-now-dwindling sedan market. Look at it. We think we’ve finally found a Hyundai design that we like better than the Kia equivalent. Actually, there are a few exceptions but we’ll run with that statement for the sake of impact and to reinforce the point.

In fact, the new sedan picked up an accolade at the 2020 GOOD DESIGN awards. And speaking of awards, the new sedan has also been handed the 2021 North American Car of the Year award, where it’s sold as the Elantra.

The N Line went on sale in Australia very late in 2020 – soon after the regular 2021 i30 Sedan arrived – with first customer vehicles rolling out over the New Year. But now we’re here at the official Australian media launch event to check it out for the first time. The local arm had a dozen examples to test, including manual, auto, and Premium versions.

Anything with an N Line badge in the i30 range comes with a 1.6-litre turbo-petrol four-cylinder. However, in the sedan you get a new engine which falls under the Smartstream family. Confusingly, it produces the exact same power and torque and at the same rev ranges. Anyway, more on that later. To refresh your memory, prices for lineup start from the following (excluding on-road costs): 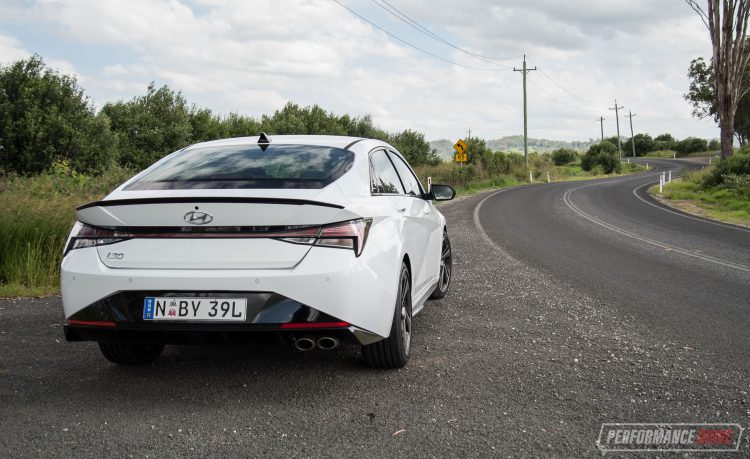 This is a beautifully-crafted design work by Hyundai. It has a habit of forcing you to take a second glance. We especially like the white body with the N-exclusive black exterior highlights. At the back is perhaps the best view of all, with the deeply cut centre fascia housing a full-width taillight. It’s all topped off with a neat lip spoiler on the boot, in black.

Black highlights continue down to the exclusive 18-inch alloy wheels, rear diffuser element, side skirts, window trims and side mirrors, and front apron. We actually think this is going to look better than the upcoming N version, as it’ll probably lose some of the darkened highlights. We’ll have to wait and see. It’s expected to arrive within the next 12 months. 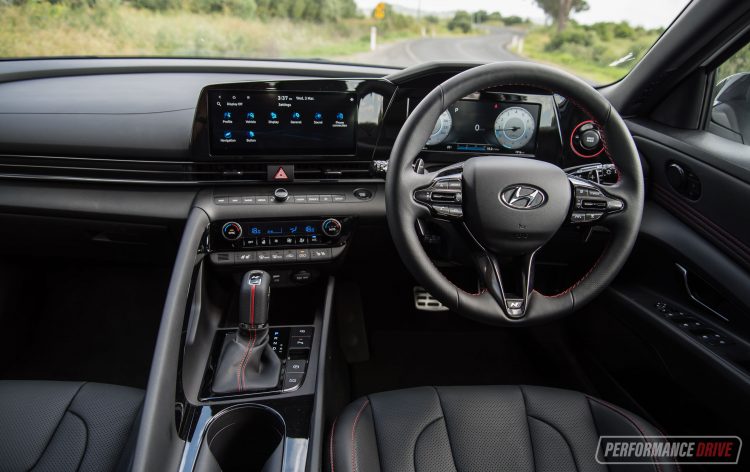 As much as the exterior draws your interest, the interior is very impressive as well. Up on the dash is Hyundai’s latest 10.25-inch touch-screen media interface, packing Android Auto and Apple CarPlay, sat-nav, and a rear-view camera. Going for the Premium variant adds an eight-speaker Bose sound system, along with digital radio and live traffic updates.

We’re usually not a fan of rectangular digital screens replacing sophisticated and intricate instrument dials. But in this case, the 10.25-inch digital instrument cluster in the Premium version seems to fit in nicely with the dash design. Since the dash is quite modern and even futuristic, a mechanical gauge would be out of place. It’d be like having an analogue clock embedded into the dash. Fine on a Bentley, but not here. 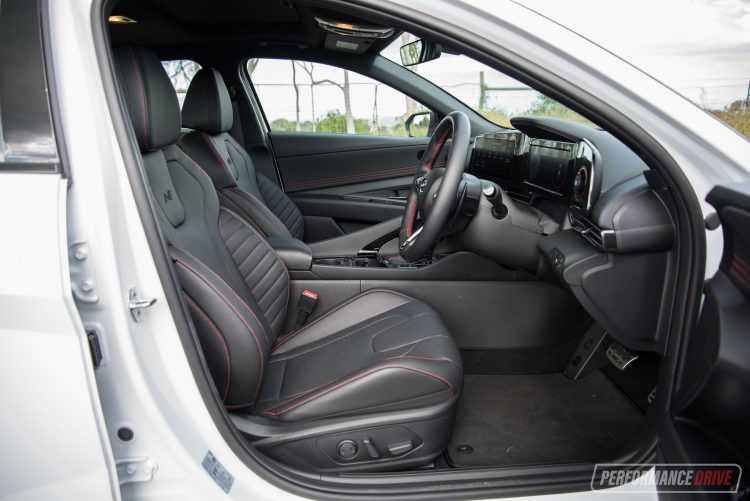 Passenger space and comfort is really good for this class. Remembering this is really an Elantra, which has always been slightly bigger than the i30. Why did they change the name? Well, it’s likely a tactic to force sales uplift, bundling the hatch and sedan as one nameplate. But rival brands have been doing it for ages; Corolla, Civic, Impreza, even the old Mitsubishi Colt.

The wrap-around centre console, complete with a passenger grab handle, seems to take up space at first. But you soon realise there is lots of storage and cup holders, big pockets in the doors, and a centre box. It feels very open and airy, yet you can lower the seat for a cosier and snug fit. Also snug are these N Line sports seats, with nicely bolstered side sections for lateral support in the corners. 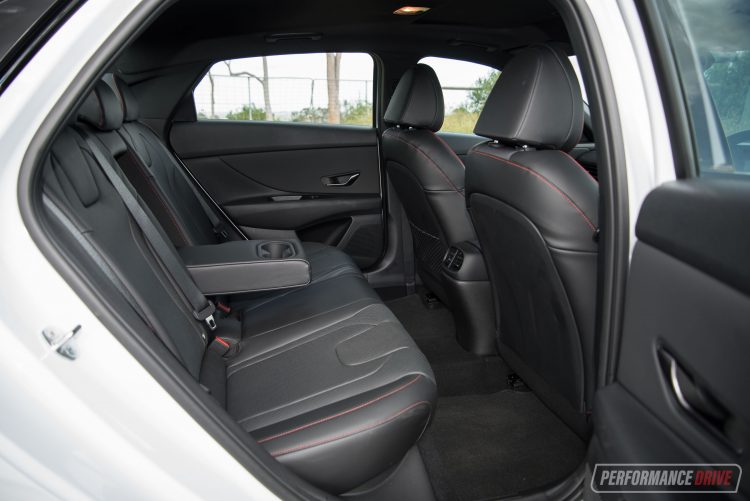 Rear seat space is definitely up compared with the i30 hatchback. Legroom, in particular, is vast. It’s great to see climate vents in the back of the console, and cup holders in the flip-down centre arm rest. Headroom is good, despite that swooping roofline on the outside. The rear bench also seems slightly reclined, more so than the hatch, making it feel spacious and relaxed.

In the back the boot volume is 474L, which is more than what you get in the hatch (395L). However, in the hatchback you can obviously fold down the rear seats for wagon-like practicality. But even so, what is presented here stacks up well against the key rivals. 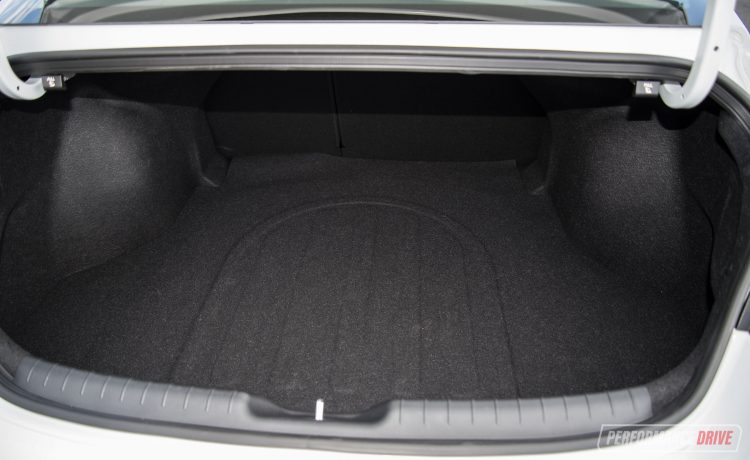 So, what’s under the bonnet? Although this 1.6-litre turbo produces 150kW and 265Nm, which is exactly the same as the 1.6 turbo we first saw in the first-generation Veloster SR Turbo around 10 years ago, this is different. It’s a brand new engine, falling under Hyundai’s Smartstream family. It features some new internals and dimensions, as well as a raised compression ratio from 9.5:1 to 10:1, and a new turbocharger.

Despite the higher compression, the engine can run on the more affordable 91 RON fuel. It also uses less fuel. The official average is 6.8L/100km, while the current i30 N Line hatch, which continues with the old Gamma engine, chews 7.1L/100km. Granted, the hatch is a smidge heavier; 1357kg for the N Line sedan and 1375kg for the N Line hatch (both tare, auto). 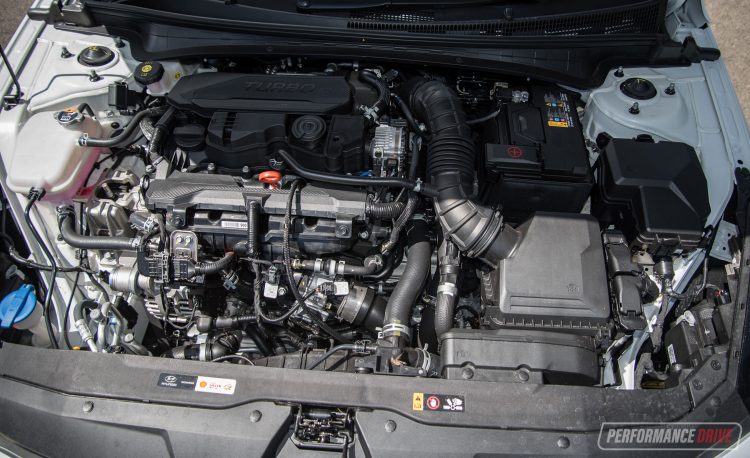 This means that the power-efficiency ratio is improved. It’s a confusing little calculation we like to do on all cars, but it can tell you a lot about an engine. For a result, divide the power output by the official consumption rate. This will tell you how an engine can use its fuel. Every drop of it. Old V8s, for example, often use a lot of fuel even for the power they make. Here, the ratio is 22.05kW:L/100km. We’ve found that anything over 25 is seriously good. So for this mainstream car to be right near that, it’s a top effort.

Out on the road we had a chance to sample its cross country touring abilities, driving from Sydney to Bathurst, while some spirited detours along the way gave us a chance to get the steering wheel wiggling. It’s worth mentioning at this point that the N Line sedan comes with a bespoke sports suspension setup, which has been tested and tuned in Australia.

The ride comfort along the highway and across country roads is just about perfect. We feel like this car deserves a slightly firm and taut setting, but somehow Hyundai’s local team has created something that is both sporty and responsive without stepping over the line into too-rigid territory. It catches nasty bumps and deals with them with steadiness and control. 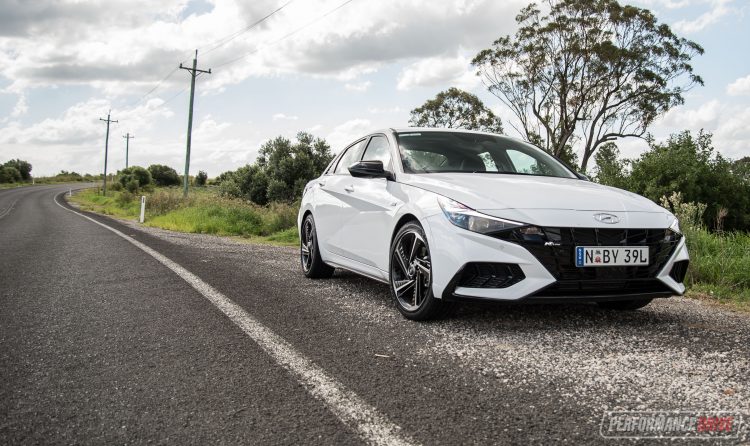 It might not be an especially light weight vehicle, but it feels nimble and playful. You can change directions swiftly and make last-minute movements, and the car just responds with utter composure and competence. For a car that isn’t necessarily a performance model, you definitely get a good taste of the proper N Performance experience.

Interestingly, Australian-delivered cars (we’re not sure about the overseas models) get 235/40 tyres. These are 10mm wider than those on the equivalent hatchback. The tyres are also Goodyear Eagle F1 as opposed to the usual Michelin Pilot Sport 4 or 4S. We aren’t complaining though, as the Goodyears provide an enormous amount of grip. You have to be pushing seriously hard to achieve understeer, or even get a squeal from them. Obviously plenty of praise needs to be thrown to the chassis and suspension, too.

The sedan uses an evolved version of the hatchback’s K2 platform, now called K3. A multi-link rear end ensures optimum control, even when tackling fast bends that contain bumps. Meanwhile at the front is the usual MacPherson strut arrangement. 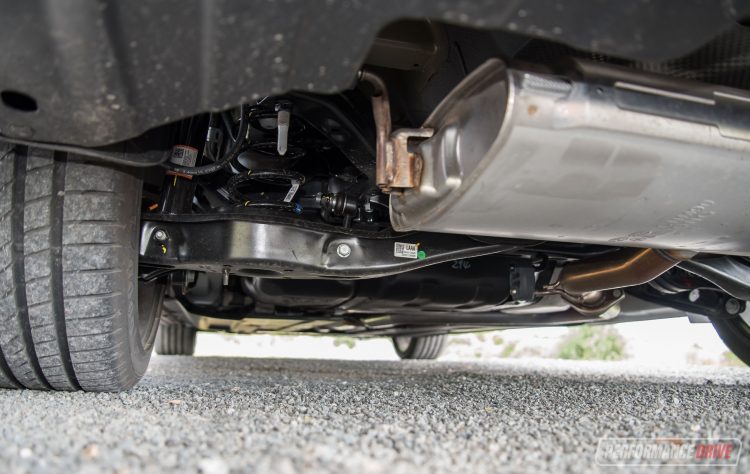 As for the powertrain. It goes and (finally) sounds very good indeed. We managed to pull away this white test car during the launch event to conduct our usual performance tests on a private road. The best 0-100km/h we could manage was 7.77 seconds. It feels a bit quicker than that to be honest. And, as the Kia Cerato GT sedan proves, with its 6.74-second time (same piece of tarmac, same power/torque, 13kg heavier), there is potential here.

We think the reason for the difference in times is purely down to the transmission calibration. It seems Hyundai has gone for a smoother dual-clutch operation, which is going to be appreciated perhaps more of the time for owners, while the Kia gets off the line quicker but its transmission can be a bit jolty at times. Even in the previous-gen Elantra (58kg heavier) we scored a time of 7.14 seconds, but again the transmission was more abrupt than this model.

Digging deeper into the Vbox results and we see 0-60km/h comes up in 4.14 seconds in this and just 3.49 seconds in the Kia. So it’s clearly snappier off the line, the Kia. However, across 60-110km/h it is much closer, at 4.78 versus 4.31. In any case, 7.7 seconds is very nifty. And aside from getting off the line we’d say it feels like a 6.7-second car anyway. Certainly fast enough for its intended purpose.

We are very impressed by this car. It really blows you away with its design, and the interior layout and packaging is also highly admirable. And to top it off, the drive experience is both rewarding and exciting but it can also settle down and perform daily duties with pleasure. A superb extension of the growing N family.