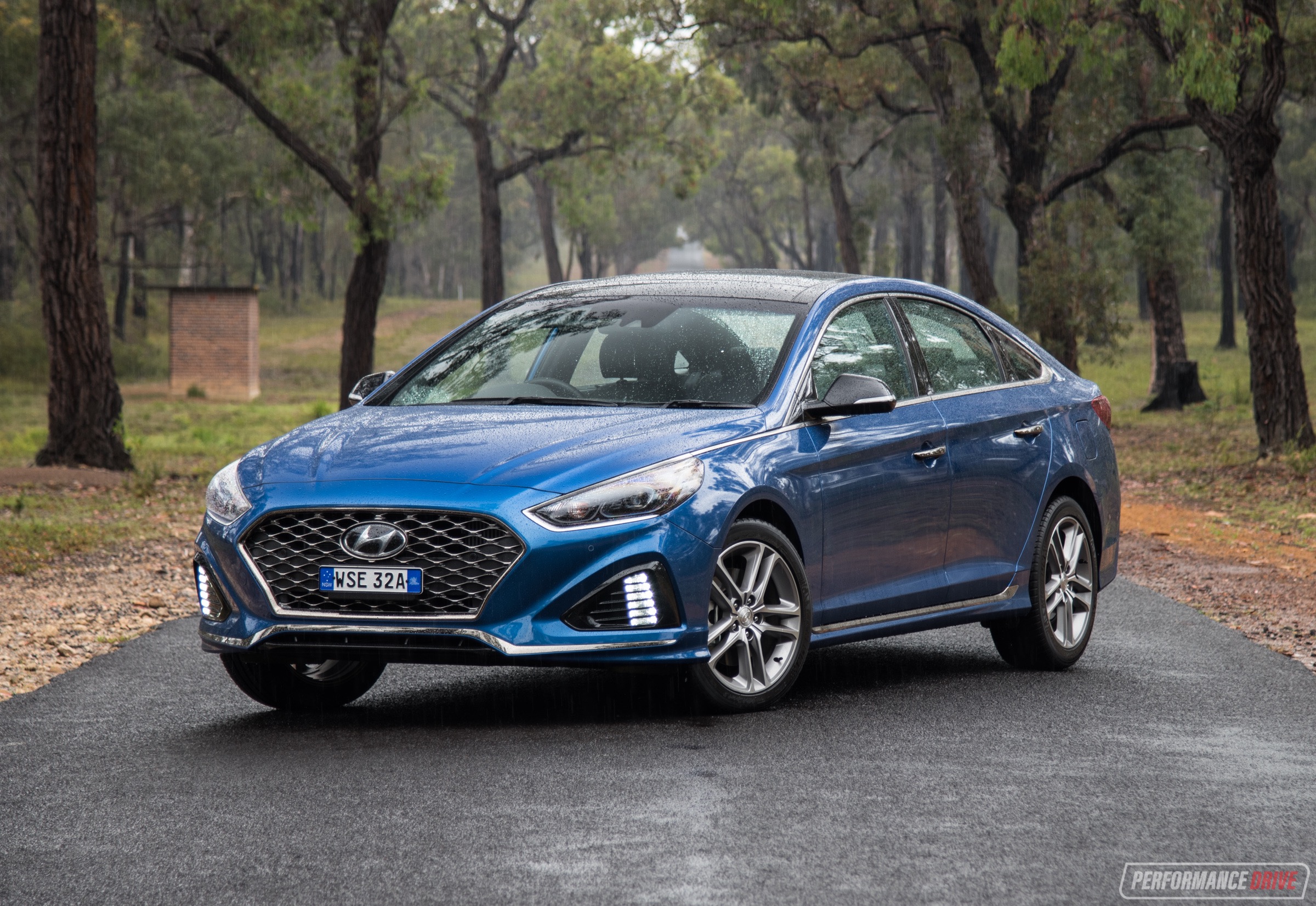 Hyundai’s 2018 Sonata has arrived with some technological upgrades, mild cosmetic enhancements to the front and rear, as well as a streamlined range now with two models; Active and Premium. This facelift for the Sonata is timely as Toyota has just launched an all-new Camry, and Holden is about to launch the new Euro-based Commodore. 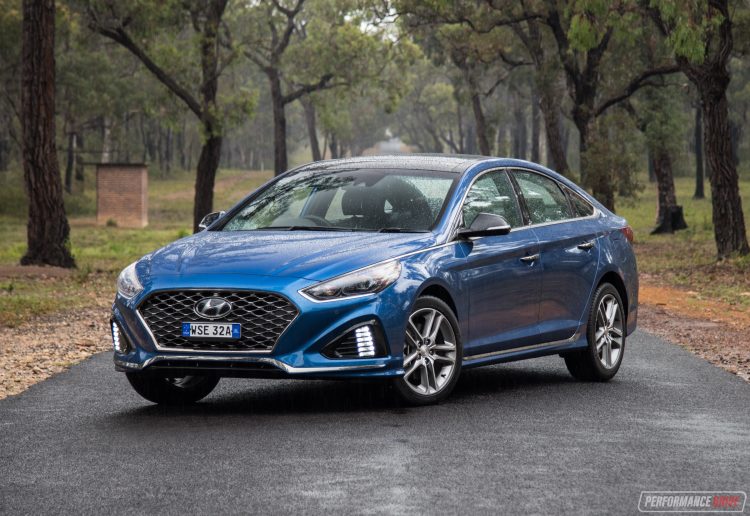 In defiance of stellar sales from most of Hyundai’s other models, including the i30, the Sonata is not a sales star, with 968 units shifted in 2017, compared with 1676 in 2016 (December VFACTS). It trails the dominant Camry, Mazda6, Volkswagen Passat and Subaru Liberty, to name a few. Even its European brother, the i40, almost eclipsed it with 888 sales.

Fresh to Australian shores, we took the 2018 Sonata Premium for a thorough examination to find out what’s changed, how it performs and whether it deserves to be on your shopping list. 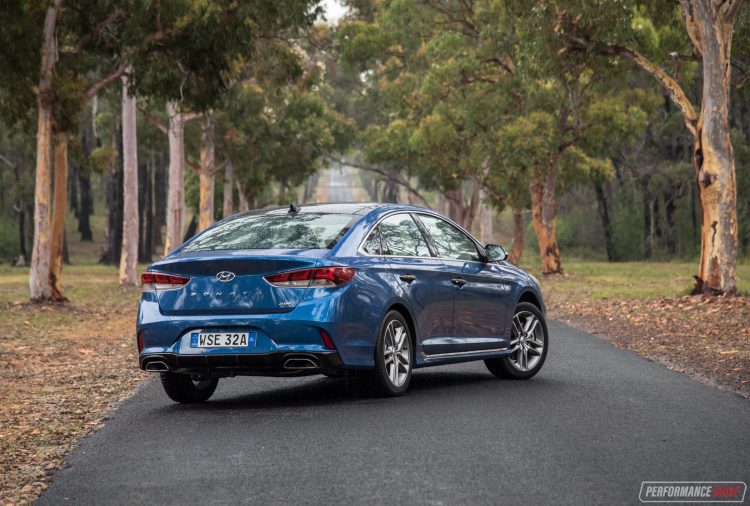 Being a warmed over version of the seventh generation (LF) that lobbed in 2014, core dimensions are the same at 4855mm, 1865mm and 1475mm for length, width and height respectively, on a wheelbase of 2805mm. For comparison’s sake, the larger new Camry is 20mm narrower, but 20mm longer in the wheelbase.

The new design aims to invigorate the conservative styling treatment of the outgoing model with some sportier and more upmarket touches, including a larger grille, bigger taillamps with relocated number plate and ‘SONATA’ script across the deck lid. LEDs have been cleverly used to spruce up the design throughout. These new changes highlight the coupe-esque roofline of the car’s profile, and give the front and rear ends a far more athletic and lithe appearance. 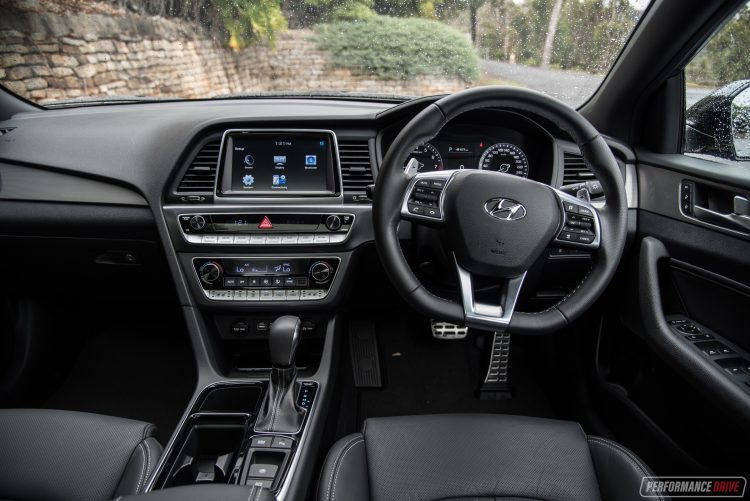 The interior cops a similarly substantial revamp with a new 8.0-inch screen across the board, featuring Apple CarPlay and Android Auto integration, satellite navigation, but no digital radio. The Sonata Premium delights with its heated and cooled perforated leather front seats, panoramic sunroof and wireless phone charger. Speaker quality and bass output impresses but higher volumes does reveal some disappointing distortion. The Premium uses just six speakers, which doesn’t seem right for a top variant.

The new steering wheel design is very upmarket with its steel accents giving off a Mercedes-Benz aura. Silver keys in the centre stack are very neat, logical and easier to operate than the equivalent Camry setup, though, that car has more storage and more features such as head-up display, and electrically adjustable steering column. 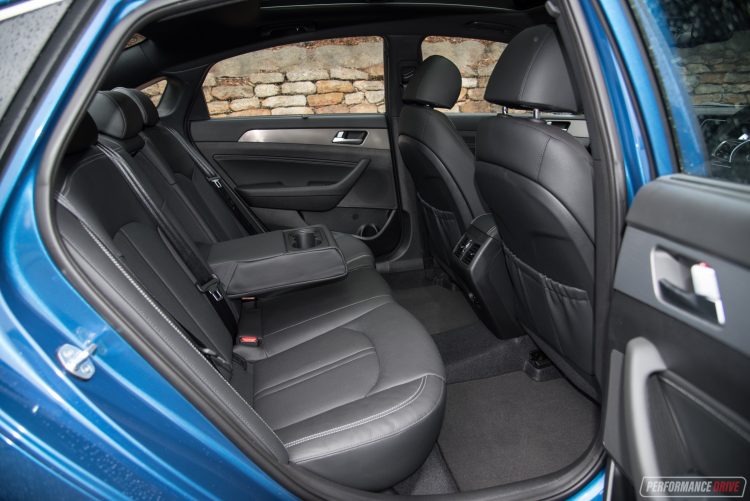 On the open road, the Sonata is a solid, comfortable and impressively premium-feeling car. The leather seats are very comfortable for long journeys, and it has a modern look and feel about it that is definitely cutting-edge Korean in character.

A few niggles soon rear their ugly head, though. The new eight-speed gearbox is prone to slight hesitation off the mark, which had us wondering if someone had stuck Hyundai’s dual-clutch unit under the bonnet while we weren’t looking. The engine does feel pokier than our 8.0-second 0-100km/h time suggests, with more character than typical of a turbo 2.0-litre four-cylinder. At 12.0L/100km during our test, the Sonata’s real-world fuel consumption isn’t all that impressive either.

On the plus side, the steering, to us, is nicer than most in this class, albeit still slightly wooden and not quite as sharp as the Mazda6. Overall, the sporting calibration by Hyundai’s Australian suspension tuning team has paid dividends, with decent bump absorption and in-corner control, and reasonable resistance to body roll.

It’s certainly a vehicle which feels much smaller than its external dimensions suggest, whether tackling bends or negotiating tight parking spots via the reverse camera and sensors; it’s one of the easiest and least intimidating sedans to drive, in our opinion. The trade-off for this is a more terse than expected ride at low speed, particularly over cobblestone surfaces. 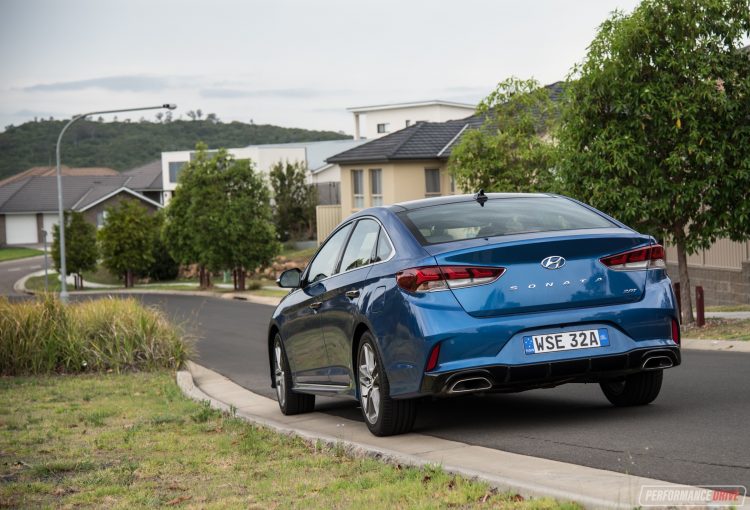 Hyundai’s updates to the Sonata give it a fresher, more striking and cohesive appearance than before, with a noticeable improvement to the interior in particular. It’s a great medium-size sedan in terms of comfort, and it offers decent performance (in top-spec anyhow), an outstanding five-year/unlimited km warranty and aftercare service that puts rivals in the shade, and most of the features you would want in a vehicle of this calibre.

The $14,500 jump from Active to Premium is quite staggering, particularly when you consider the rivals offer their top-range engine option for a lower entry price. Unbelievably for a Hyundai, it does not really excel in terms of value and misses out on some of the more cutting-edge gadgets that are starting to proliferate across its rivals.

We would recommend the Sonata Active as it appears, on paper, to be a better value proposition. Either way, if you’re after a trusty, practical and impressive-looking sedan with room for everyone to sprawl out comfortably, it should definitely be on your shortlist.