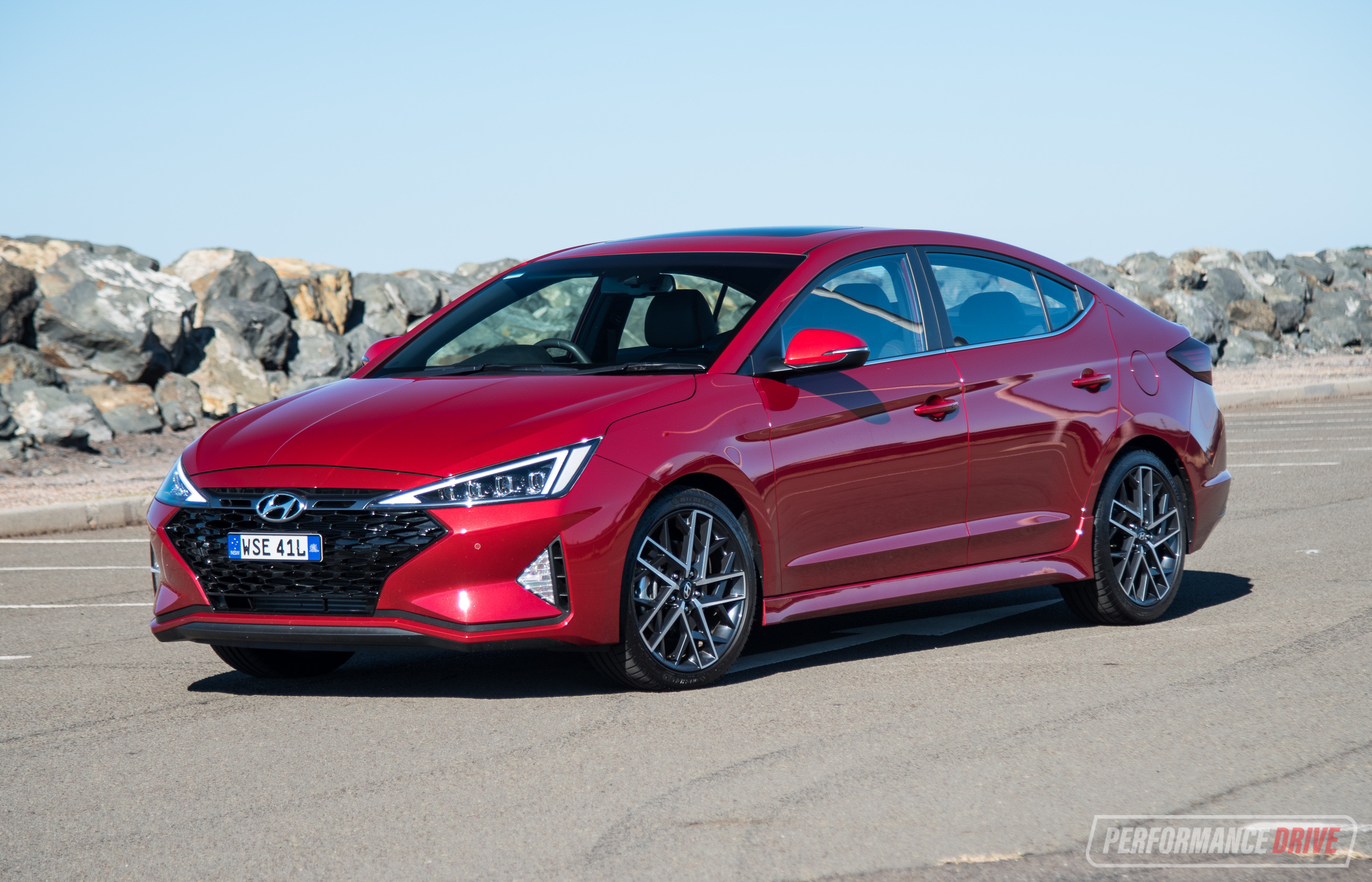 Check out this sharp-looking sedan. It’s the new Hyundai Elantra Sport, and it’s ready to take on the small car market with spaciousness, packaging, and turbo power as its main attractions. 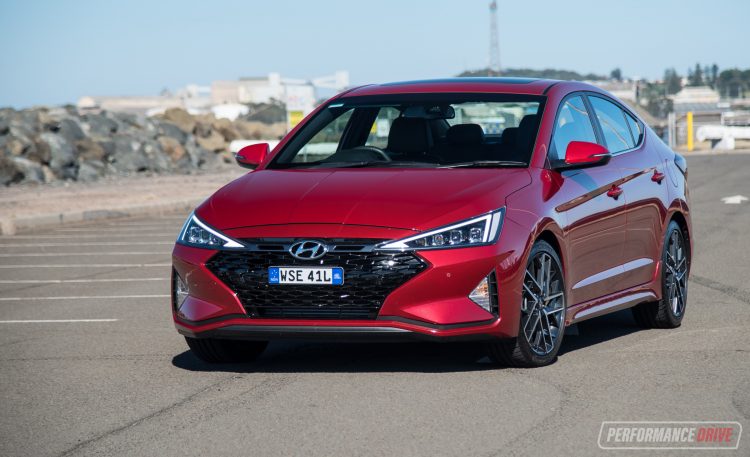 Four variants are on sale in Australia, spanning from the budget-friendly Go, to the Active, and then the turbocharged Sport and Sport Premium. Both of the Sport variants replace the previous Elantra SR.

Here we’re testing the top model with the seven-speed dual-clutch auto. A six-speed manual is also available for a more hands-on experience. Prices start from $21,490 for the base model Go, while this flagship Sport Premium auto kicks off from $33,990.

Considering the Elantra is one of the largest vehicles that competes in the popular small car market, along with the likes of the Toyota Corolla and Mazda3 (according to VFACTS), these prices compare very well. 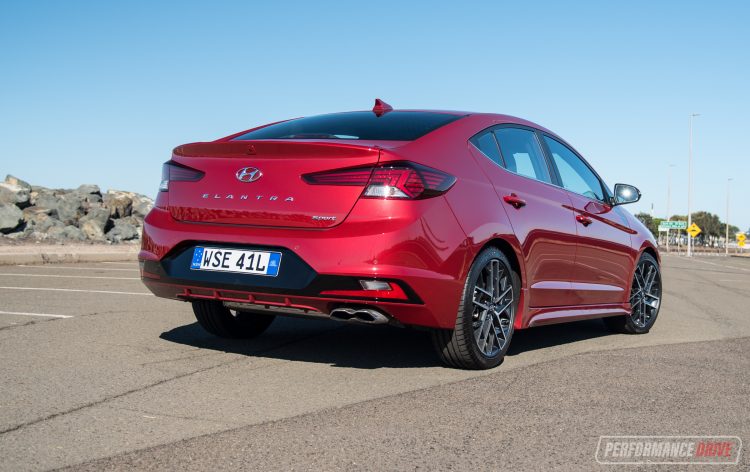 You only need to take a seat inside to understand just how large this is compared with the rivals. Accommodation in the front is very impressive. A pair of nicely-sculpted sports seats cuddle you, with electric adjustment for the driver. Headroom and legroom is more than acceptable for this class, and the visibility is great thanks to well positioned pillars and big windows.

Have a look at the dash and centre console. There are so many buttons and facilities at your disposal, including selectable driving modes, heating for the front seats, USB, aux-in and a 12-volt socket, as well as a wireless charge pad, and a neat storage box in the middle that doubles as a convenient arm rest. 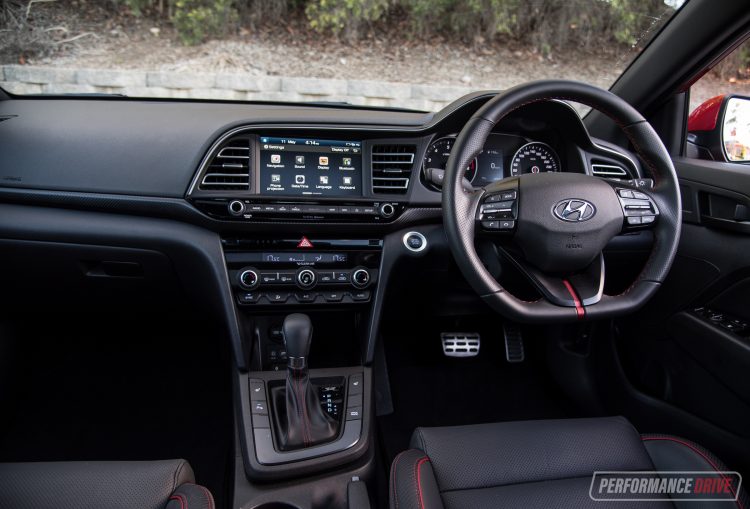 Up on the dash is Hyundai’s 8.0-inch touch-screen media interface. It’s not the company’s latest and greatest system, like what you find in the Kona Electric and the upcoming Venue small SUV. But it does pack in plenty of modern apps. Android Auto and Apple CarPlay are standard, along with in-built sat-nav, a rear-view camera, SUNA live traffic updates, and digital radio.

The latest Elantra is well covered for safety tech too, with the Sport models coming as standard with Hyundai’s SmartSense suite. This is essentially Hyundai speak for the common active safety systems such as autonomous emergency braking, rear cross-traffic alert, and blind-spot warning. 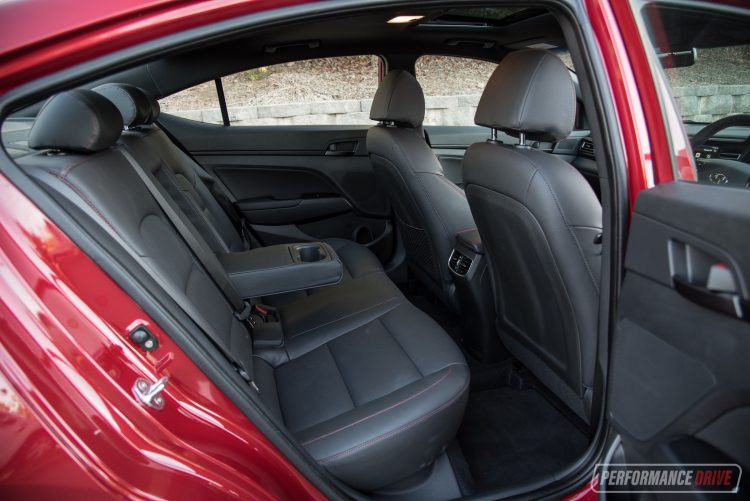 So, what’s not to like about it all? Well, there aren’t many concerns that you should be worrying about. The spaciousness and the amount of features presented really pushes the Elantra forward in this class. We guess some of the lower cabin plastics are a bit cheap and scratchy, but that’s to be expected for this market segment and this price point.

Strangely, we did notice what seemed to be poor cabin filtration during our test. It may have been subject to this test car, but after driving it for a week we did smell a lot of the external environment entering the cabin. We know it’s a strange complaint but we didn’t drive anywhere out of the ordinary compared with every other car we test.

We’re also not completely convinced of the new-look design. It looks very pointed at the front and a bit strange at the rear. Compared with the previous model anyway. And that looked really nice, with neater proportions. Maybe this is something that grows on you over time? It certainly looks modern and will probably age slower than the previous design. 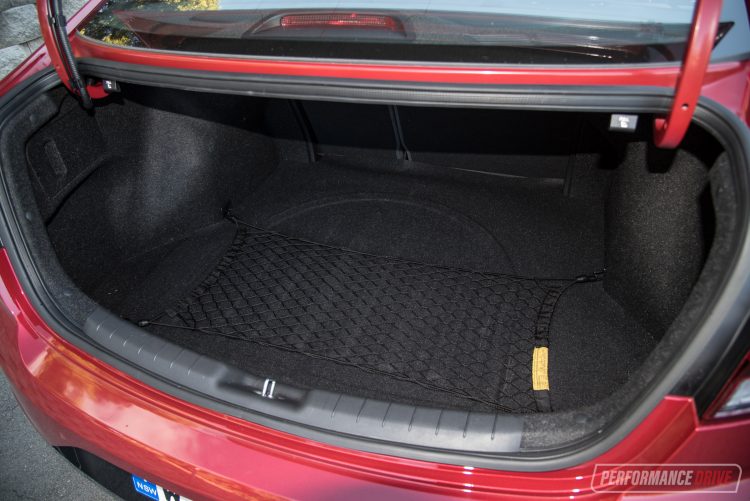 Powering the latest Sport is a carry-over 1.6-litre turbo four-cylinder that produces the same 150kW at 6000rpm, and 265Nm between 1500-4500rpm. This engine has been around for quite a while, since debuting in original Veloster SR Turbo in 2013 in fact.

On paper the unit does meet modern standards for this class. It offers a wide torque span, which is a good sign of modernity, but in saying that the revs for peak power are rather high for this style of engine. The engine incorporates variable valve timing, and uses a high compression ratio (for a turbo) of 9.5:1. There’s also a twin-scroll turbocharger and direct injection, and it’s able to run on 91 RON fuel.

Another way to determine how advanced an engine is, is to divide the power output by the official fuel consumption average. We call this the power-to-efficiency ratio (included in our tech box above). Given that the average consumption is 7.0L/100km, you end up with a figure of 21.42:L/100. Anything over 20 is usually good in our books. 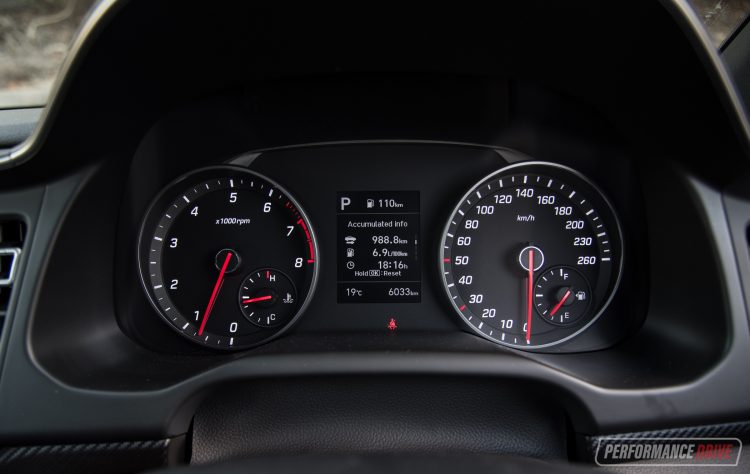 Out on the road the engine doesn’t feel like it lacks torque, even in this relatively large car. Pushing the accelerator pedal hard results in decent response too, yet it will carry through to its peaky top end. As a result, maximum acceleration is better than you might expect. We clocked 0-100km/h in 7.14 seconds. Considering this isn’t designed to be a dedicated hot hatch, the time is superior to many of the direct rivals. As a side note, it’s not quite as quick as the previous model we tested a couple of years ago. It ran 6.87 seconds (auto). This may be down to the slight weight difference, with the old model weighing 1385kg and this new version weighing 1415kg.

The only thing we don’t like about the engine is the sound it makes. Throughout the rev range there’s nothing but a dreary, bland, vacuum-cleaner-like noise. And this is a shame because as we found out with the latest Cerato GT we recently tested, which uses the same engine, it is capable of producing a lovely sporty note.

We’re also a bit confused about the auto transmission. It is a dual-clutch type, and it changes gear very quickly. However, is Hyundai trying to give the Elantra Sport a luxury spin, what with the subdued soundtrack and all? Because the very slow take-up off the mark seems to suggest so. During slow-speed conditions, such as when navigating a roundabout or pulling away from a giveway intersection, there is a very noticeable delay between pushing the throttle and the car actually moving.

If this is on purpose to try and create a smooth and comfortable drive, then that’s fine. But why fit a dual-clutch unit at all if that’s the approach? Why not just use a conventional torque-convertor auto? In Sport mode the transmission does seem to be a bit snappier and reactive, but in Normal mode we think the delays can be hazardous in city conditions. 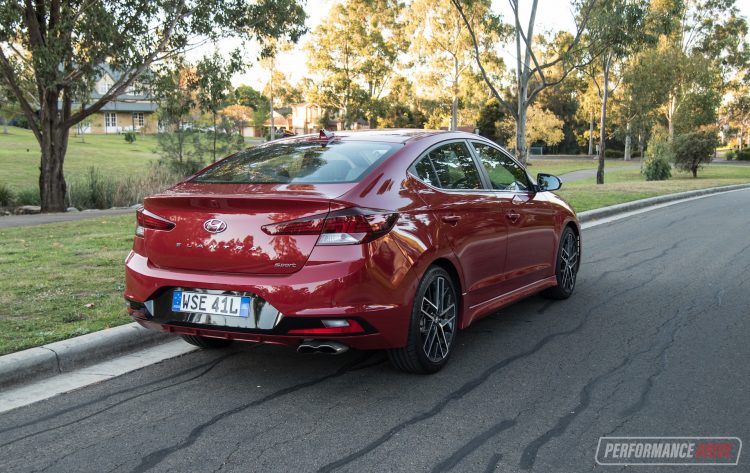 Out in the country the Elantra Sport soaks up Aussie roads extremely well. Hyundai’s local engineers applied a custom tune to the suspension and electronic power steering. This involved thousands of kilometres of testing on local roads. And you can tell. Compliance over corrugations while cornering is very good, and the general ride comfort is spot on. Even bettering a lot of the European rivals.

In terms of the handling and prowess around spirited bends, the Elantra Sport doesn’t immediately communicate to you that it wants to take on corners. The steering is a bit bland and doesn’t convey much encouragement. And not that it’s meant to really, considering this isn’t a hot hatch. However, when you do push it pretty hard it does respond. The underlying grip and balance is there. You just need to be pushing it hard to experience it.

As for the fuel economy in the real world, we managed a very respectable 7.2L/100km. That’s only 0.2 above the official average. So in that sense, maybe the dual-clutch auto is primarily here to help out in this department?

If you’re in the market for a small sedan that’s large on the inside and filled to the brim with features, the Elantra Sport is a great option. It’s backed by a five-year unlimited kilometre warranty, and it offers good performance and a fitting suspension tune for Australia. The real-world fuel economy is also impressive.

The only areas that we think deserve some attention include the dual-clutch transmission because of its noticeable delays, and the engine sound could do with a more exuberant tune. That new-look design might also take some getting used to, compared with the suave predecessor.