It’s not very common that you see tuners taking to Skoda models, this Milotec Skoda Octavia RS sets to prove that common perception wrong though. It also proves Skoda models don’t always have to be the conservative choice. 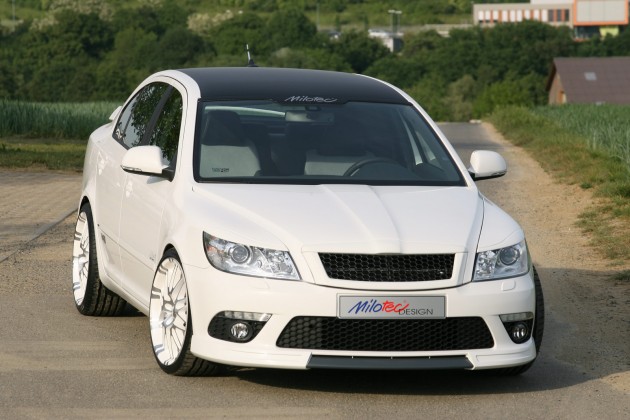 It’s a bit of sleeper concept, doing up a Skoda, don’t you think? Skoda cars, even though they have access to one of the world’s biggest car companies, a company that wants to take over the reins as top vehicle manufacturer in terms of sales by 2018, the high performance side of Volkswagen doesn’t really flow into Skoda models.

So it’s no wonder there is some demand for tuning programs, they’re perhaps just not as common as other makes. The Milotec Skoda Octavia RS is based on the high-performance diesel ‘RS’ sedan. It comes with exterior and interior revisions, as well as engine performance upgrades.

Firstly, the Milotec Skoda Octavia RS uses the standard 2.0-litre TDI turbo-diesel four-cylinder engine as a base. With the help of an exhaust system and an ECU recalibration, standard output is taken from 125kW up to around 150kW. And although it may not be much, it could be just enough for the conservative and somewhat shy Octavia RS to brake out of its shell.

If the performance under the bonnet don’t do it, the styling upgrades certainly will. On the outside, the Milotec Skoda Octavia RS features new 19-inch alloy wheels, along with a new, more angry front bumper bar with black mesh inserts.

The rear end also features a performance-revised theme with the addition of a new deck spoiler on the boot, a new rear bumper bar design and a rear diffuser underneath.

What do you think of it? Does the Milotec Skoda Octavia RS work as a tuned Skoda? Or does it seem a little wrong? Feel free to use the comments section below to speak your mind.

For more information on Skoda cars that are available in Australia at the moment, including the Skoda Octavia RS, head over to the Skoda Australia website.