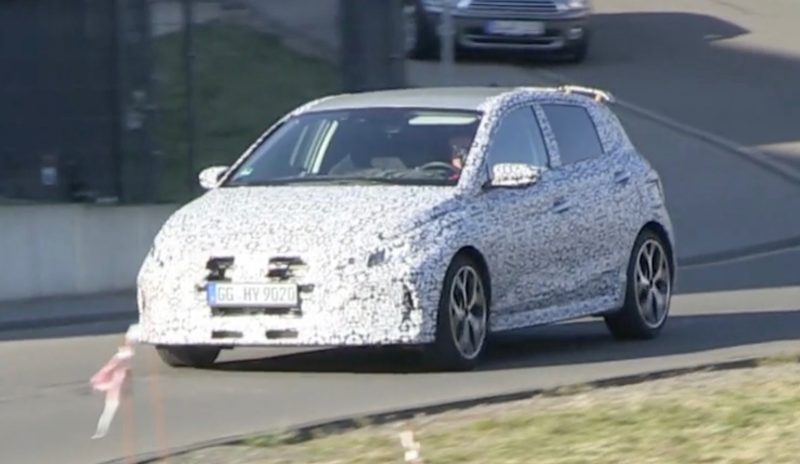 The highly-anticipated 2021 Hyundai i20 N hot hatch has been spotted again doing some laps around the Nurburgring in Germany, ahead of its debut slated for late this year. 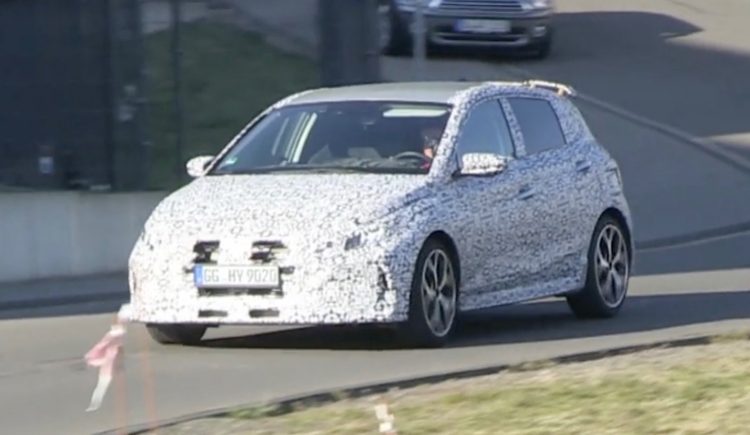 In the latest spy video, by Motor1, we get a good taste of the engine sound too, as well as some reasonably close-up shots of another test mule as it makes its way around the Nurburgring facility in the town of Nurburg. These close shots reveal some interesting details.

While the body is wrapped in traditionally disorienting camouflage, the prototype spotted on the roads doesn’t appear to be wearing any thick black sheeting like the prototype shown on the track. This does reveal some of the body’s contours. In fact, suspicions suggest it could be wearing its production body, at least in some areas.

At the front is an obvious low spoiler system and you can just make out Hyundai’s latest corner cluster intakes, with a faint pentagonal shape and a vertical intake slit. From some angles you can also see hints of pumped front and rear wheel arches, and side skirts are pretty obvious. At the back is a new quad-strut spoiler mounted high. 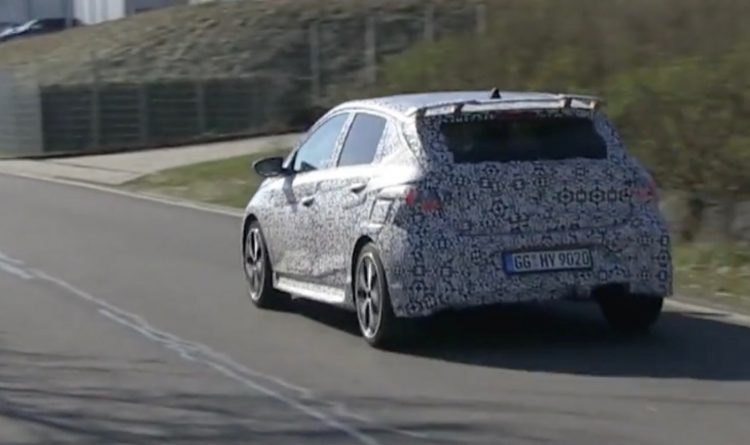 The Hyundai i20 N will hit the market as an answer to vehicles such as the Ford Fiesta ST, VW Polo GTI, and the upcoming Toyota GR Yaris. It’s set to be powered by a 1.6-litre turbo four-cylinder, likely based on Hyundai’s existing 1.6 unit that’s found in the Veloster Turbo and Kona and Tucson 1.6T.

There hasn’t been any word on the power output yet, but let’s take a lot at what’s available. In the Kona and Tucson the engine produces 130kW and 265Nm, while in the latest Veloster it kicks out 150kW and 275Nm (10Nm of overboost).

Hyundai’s N boffins will no doubt want to make some tweaks to the unit and give it some N flavour, particularly in the areas of intake and exhaust, but we’re guessing it’ll produce around 150kW. That’s if this is the engine of choice that is.

Like the i30 N and Veloster N, the i20 hot hatch will also come with unique sports suspension and brakes, big alloy wheels, and a spruced up interior to match. It’s unclear at this stage if Hyundai will offer both a manual and dual-clutch auto, or just one of the two.

According to a leaked product schedule last month the i20 N might actually follow the Kona N’s debut. The sheet outlined a July debut for the Kona N, and no mention at all of the i20 N for 2020. We’ll have to wait and see. In the meantime, check out the spy video below for a preview.