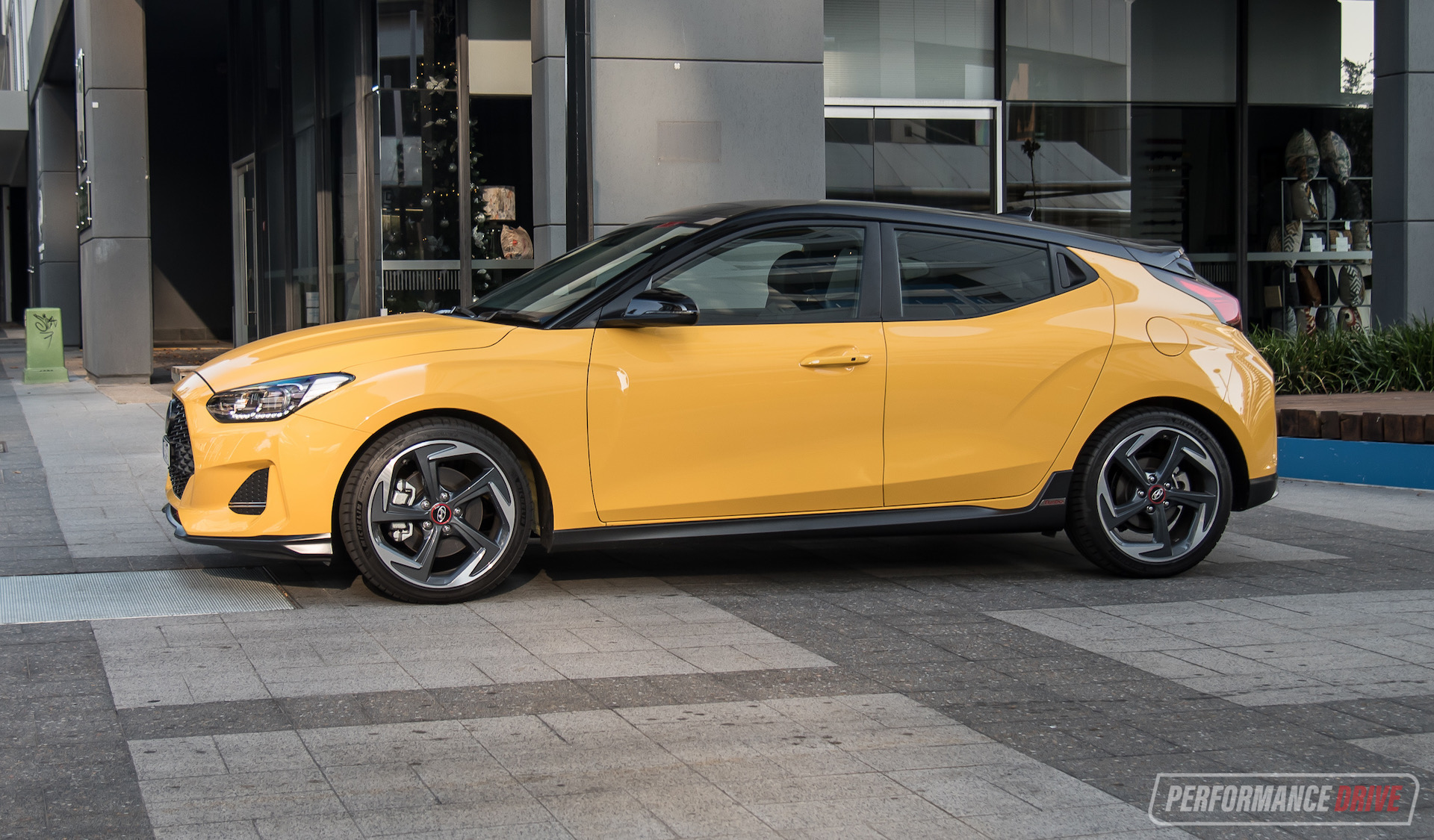 Say you’re looking to buy a hot hatch but you don’t really want the full noise and all of the attention they often bring. Well, Hyundai offers something that could be perfect for you; the all-new Veloster Turbo. 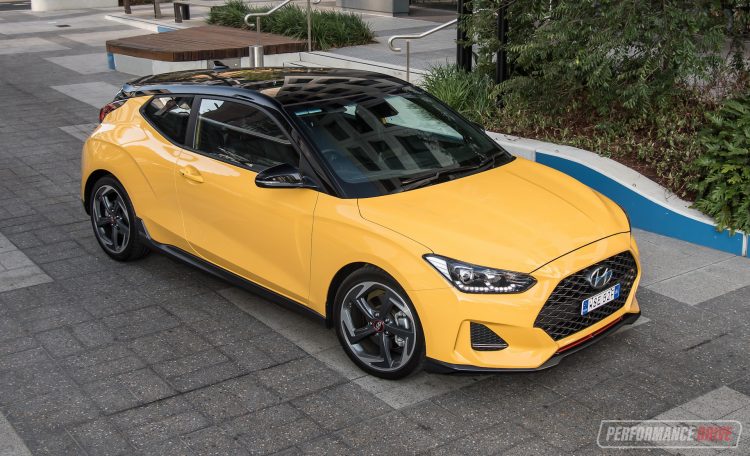 It still has the ‘turbo’ personality and certainly the sporty looks, but its skills and performance are designed to appeal to a much wider audience compared with a top-shelf hot hatch. Consider it a warm coupe, with the Veloster’s quirky third door on the passenger side providing hatchback practicality.

The 2020 version is an all-new model, based on a much fresher platform than the old model (now sharing the latest i30 layout), with multi-link rear suspension, a totally revamped body design, and re-engineered interior ergonomics. Even the engine has been updated, although, it is only a very minor change that mainly introduces overboost to lift torque from 265Nm to 275Nm (for short periods). Power remains at 150kW.

According to the 2020 Veloster price list, this flagship Turbo Premium variant with the dual-clutch auto starts from $41,990, or you can save $3000 by sticking with the standard manual. At these prices, it is, strangely, more expensive than the i30 N hatch, which is a proper hot hatch – it starts from $40,490 (available with a manual only, for now). 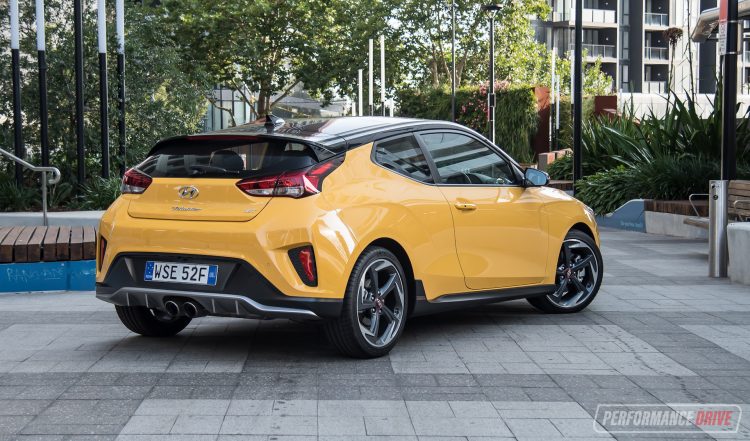 Even though it is technically characterised a sports car, according to VFACTS, there’s still lots of that traditional Hyundai practicality in the cabin. For example, the doors open wide and it is easy to get in and out of. One of the first things you’ll notice about the new model inside are the sheer options for storing your stuff.

On the centre console there are two decent-sized cup holders and a storage box that doubles as an arm rest. Forward from that are the drive mode settings, and controls for the heated and cooled front seats (standard on the Premium). And then just in front of that is a large rubber-lined shelf with an in-built wireless phone charger pad. 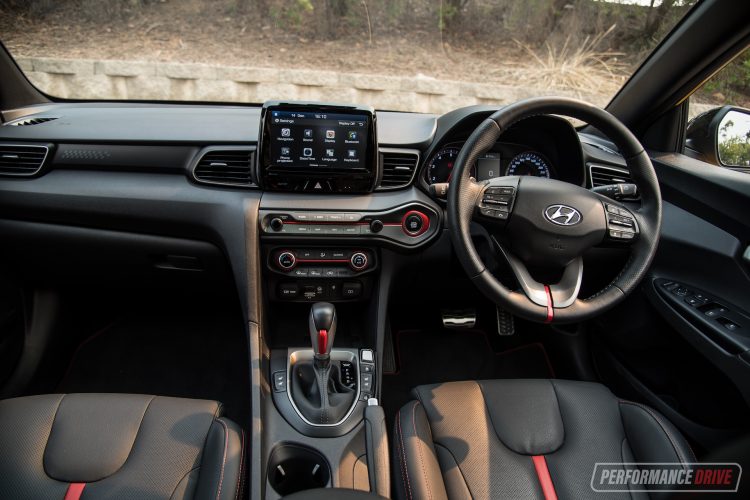 This is definitely a car that can support a busy-everyday lifestyle, without sacrifices. It’s all very user-friendly and comfortable, with decent headroom and legroom in the front, and it’s not bad in the back either. Considering you have that third door, it is definitely easier to live with than a typical two-door coupe. Hyundai hasn’t bothered putting a seat in the middle, which may turn away some buyers. But this does leave more shoulder space for the outer two, and cup holders in the middle.

As for the structural changes for the new model to help ergonomics? The rear door aperture is widened by 58mm, making it easier to jump in, and the roof extends further back so the hatch lid no longer shuts on top of the rear seat headrests/passengers’ heads. This does mean boot space is reduced slightly, from 320L to 303L – also due to the multi-link rear suspension. In the front the instrument cluster is raised up by 10mm, and the driver’s seat can be adjusted to sit 5mm lower. 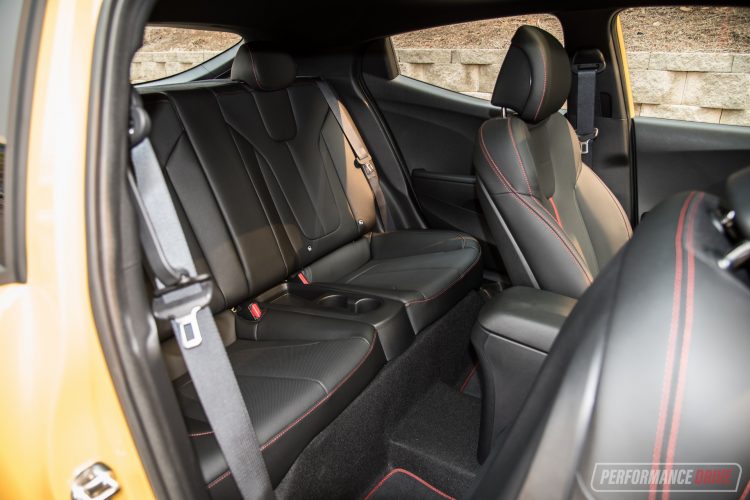 Climate control is standard on the Premium, but only single zone. In saying that, the cabin is pretty small in general so it’s not like a dual-zone setup would be all that effective anyway.

There’s also an 8.0-inch touch-screen media interface (up from 7.0 in the non-turbo model) with Android Auto and Apple CarPlay, and standard in-built sat-nav and an eight-speaker sound system for the Premium variant. Real-time tyre pressure monitoring is also standard, displayed on the partially digital instrument cluster. 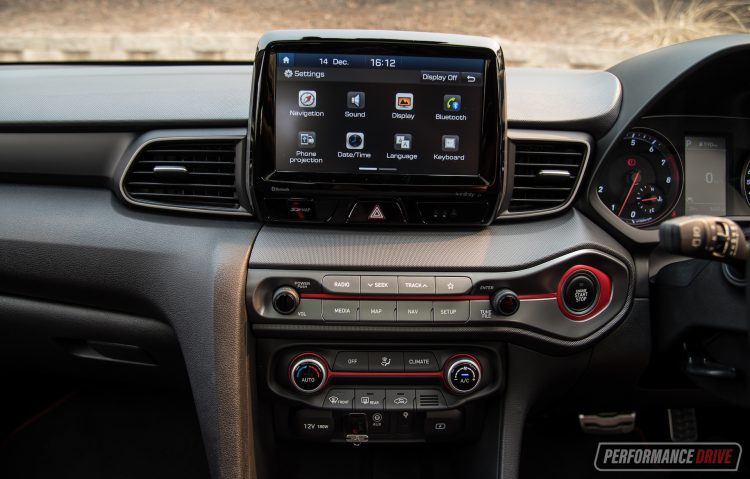 Hyundai has given the controls a makeover in terms of design and feel as well. The buttons press with a reassuring quality and softness, and some sporty red highlights are scattered about to help separate it from the regular Hyundai lineup. We like the concave theme for the button clusters too, which extends across to the right side of the steering wheel.

In some areas there is that generic, elephant-skin-textured plastic that we’ve seen since the 1990s, namely for the glove box and lower door trims. This is a bit disappointing to see considering this particular variant’s price. Other textured plastics are used for other parts of the dash though, which are much nicer. A nifty chequered flag logo on the passenger side adds some flair. 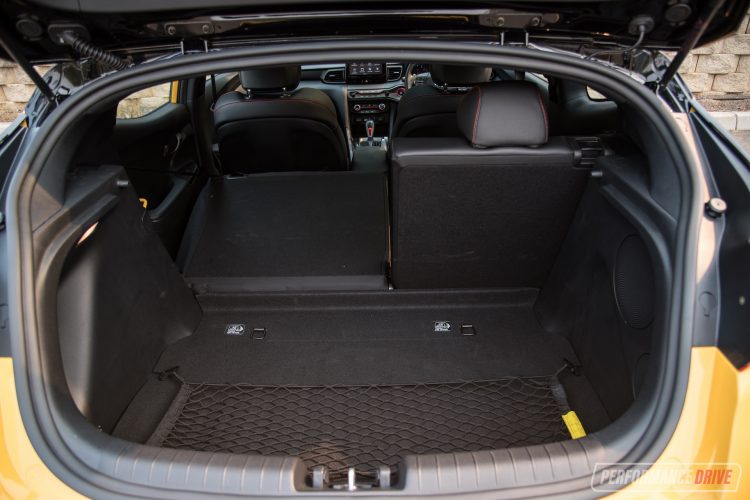 It’s all well and good to say you’ve got multi-link rear suspension, but what does it actually provide? Why is it better? Without turning this into an engineering lecture, multi-link setups basically provide more individual wheel control and a wider range of compression motion compared with older torsion beam arrangements. Hyundai has also installed optimised bushes for the suspension components over the previous model, and introduced thicker bump-stops.

As per usual, Hyundai Australia has given the new model its local seal of approval by completely going over the steering and suspension settings to ensure they work as effectively as they can on Australian roads. In fact, the company says it went through 28 different rear damper setups and 15 front before it found the optimum combo, for example. 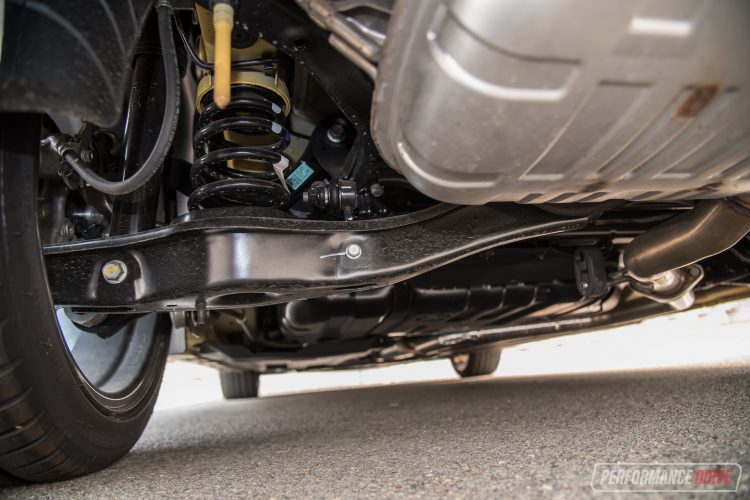 Well, it’s definitely worked. The 2020 Veloster loves Aussie backroads and bumpy mountainous stints. You can smash over imperfect surfaces confidently knowing there will be no major kickback or complaint sent back through. Tracking remains on point throughout turns, even over mid-corner bumps, and with the new Michelin Pilot Sport 4 tyres, measuring 225/40, there is enormous amounts of grip.

The steering setup on the previous model was pretty ordinary, with not much feel or enthusiasm to be found. Now though, the steering is really nice. You get lots of communication, so you’e always up to date with what the wheels and tyres are doing. And it feels good to turn in and wrestle with in tight and twisty bends. It’s fun and you get the sense the car now wants to have fun with you. Hyundai has also installed a quicker steering rack so it’s more eager to make those turns. 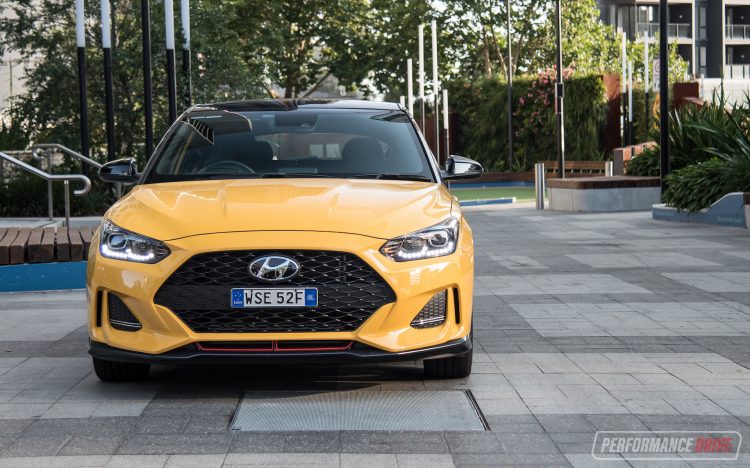 As for the 1.6-litre turbo engine? It is a bit of a shame there aren’t some more significant updates to it, such as a small lift in power or something. Even just for the sake of further distinction from the old model. The new chassis, suspension and tyres would be more than capable of supporting more power, too. Quick opinion aside though, and 150kW does seem like the perfect amount for this style of vehicle.

With the slick-shifting seven-speed dual-clutch auto, we were able to improve on our previous 6.82-second 0-100km/h time during recent testing. While we did perform some sprints with the Vbox during the official media launch late last year, we didn’t have time to give it a proper go with multiple runs. On our usual private road though we saw a best of 6.68 seconds. That’s close to hot hatch performance. 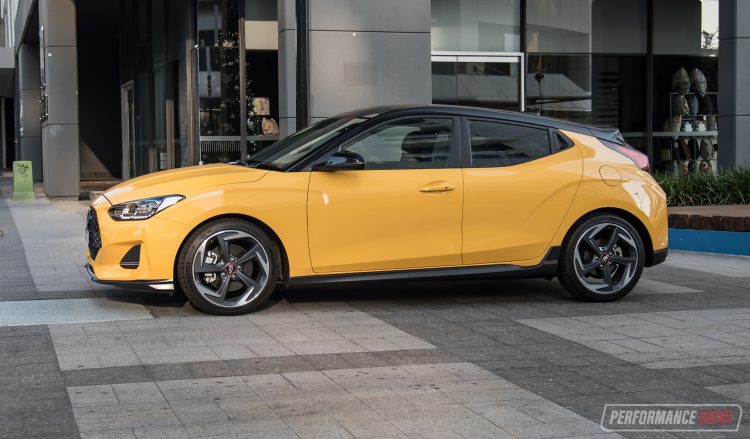 For us, a factor that’s just as important in the sporty driving experience is the engine’s character and noise. Thankfully, Hyundai has made some revisions to the exhaust so it no longer produces a muffled whoosh. Instead, it sends out a bassy, burbly note. On moderate throttle you get a neat little pop and splutter on upshifts and when backing off, and the deeper idle gives the car a lot more presence and perhaps even street cred. Really high up in the rev range the whooshing sound seems to overtake the bass, but that’s fine as you’re not likely to spend heaps of time in that area anyway.

Putting aside the car’s sporty credentials, the Veloster Turbo remains as a very practical and user-friendly vehicle to drive. Visibility is good and all of the controls are suitably light and familiar. About the only minor drawback in everyday usability is the dual-clutch auto. It is simply a technology that you may need to acclimatise to. There are some delays going from drive to reverse, for example, and it’s not the smoothest-shifting unit when driving in a very relaxed manner. On the positive side, these transmissions provide super-fast gearshifts when you want to take part in spirited driving.

An area that really does need improvement is the adaptive cruise control. You can set the distant/gap between you and the car in front, which is good. But the system here doesn’t seem to read the traffic all that well. It slows down too much when a car pulls in front, and then delays returning back to up speed. In busy conditions it can be quite frustrating as many motorists seems to jump in front during the delays, pushing you further and further back in the general flow. 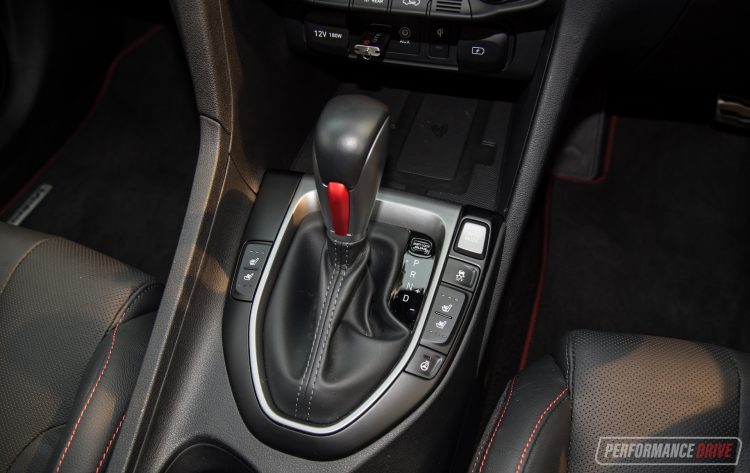 This is an honest, fun-loving sports car that offers excellent practicality over a conventional coupe. The performance is well up to the standards, and the handling and steering is now properly supportive of driving enthusiasts.

Being characterised as a sports car seems to mean the price is allowed to be higher than an equivalent hatch. However, in reality this spec here is actually more expensive than the epic i30 N hot hatch. We know what we would buy, but we can understand why many will go for this instead. It is a great intermediate step towards a full hot hatch, and that’s probably a position where most of the market sits.