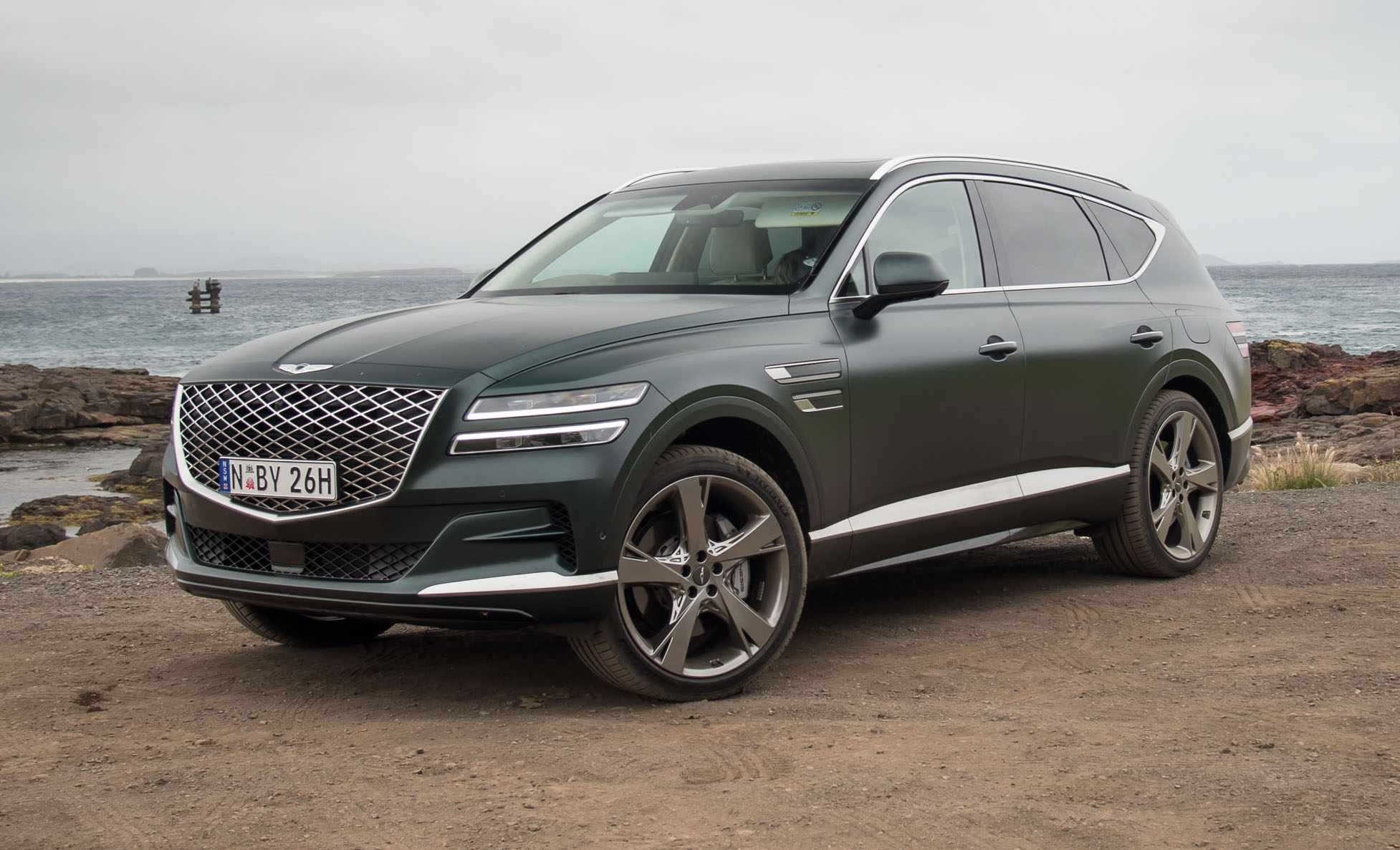 The market is flooded with 7-seat SUVs at the moment, it’s hard to know which one to go for. Being different is sometimes a good way to stand out. Enter the 2021 Genesis GV80. 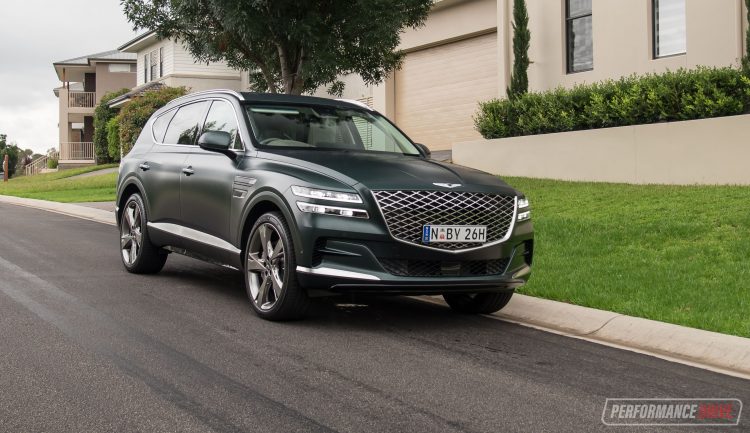 This, as we initially discovered during the official launch a few months ago, is the Hyundai-owned luxury brand’s first SUV. It has its target set on the likes of the Audi Q7, BMW X5, and Mercedes GLE. Aside from showcasing a unique and intriguing design compared with those rivals, it seems the GV80 sets out to be different by being first and foremost, luxurious and comfortable. But more on that later.

That means it is a touch more affordable than the cheapest Audi Q7 (from $103,300), BMW X5 (from $104,900), and Mercedes-Benz GLE ($105,089). Interestingly, the GV80 is more expensive than the Lexus RX (from $73,136), which also competes in this segment. Even the most affordable RX L seven-seater undercuts it, starting from $86,836. We mention these four rivals as they were the top four most popular SUVs in this large premium SUV class in Australia last year, according to VFACTS. 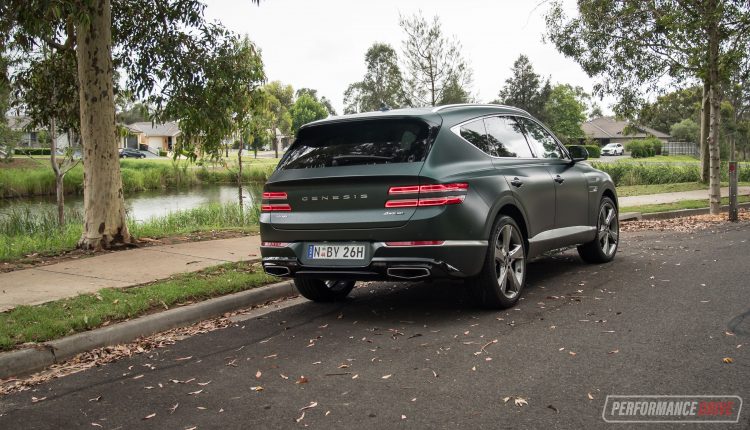 As soon as you open a door you quickly realise Genesis has put luxury as the top priority. And that’s potentially a point of difference in the face of those common rivals. They are luxurious as well, obviously, but more like business-class luxury. This is different. This is Emirates-style first-class luxury. Light and space are key characteristics, particularly in the spec of this test vehicle.

On the console and dash you’ve got real open-pore birch wood trimmings, paired with ‘Urban Brown’ two-tone trim with white leather. One of the great things about Genesis, particularly compared with the German rivals, is you can choose between a range of different wood and leather packages at no extra cost. We think this actually creates a more exclusive vehicle overall, as some buyers could otherwise be turned off by optional extras and just stick with the default package. Here, all customers are free to mix and match without guilt. 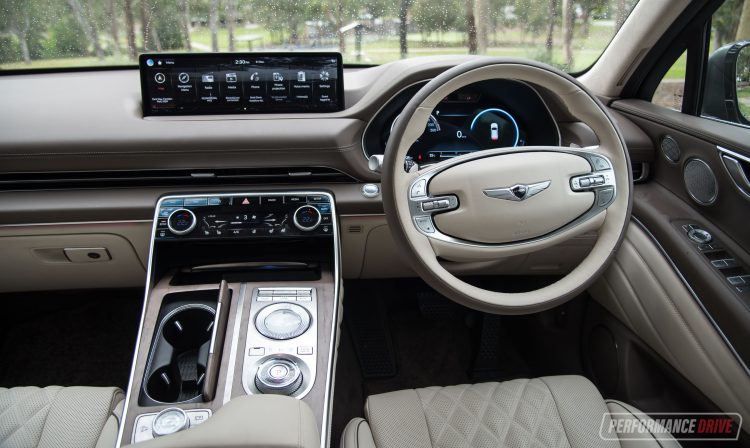 In terms of passenger space, this thing is huge inside. There is copious headroom and legroom in the front, with a well-forward dash and mid-level console making it feel clear and uncluttered. On the console you’ll see the swank new rotary hand controller for the massive 14.5-inch wide-screen media interface. It does take a little bit of getting used to but it saves you reaching up and operating the screen by touch, which you can do as well. Glass detailing is included within the wheel, with a matching gear selector dial.

That is one big touch-screen. And the graphics and colour palette for the menus are cool and reserved. It provides connectivity via Android Auto and Apple CarPlay, with the 3.5T coming standard with a thumping 21-speaker sound system by Lexicon. In fact, it’s standard on all models. About the only thing we don’t like about the interface is the sheer number of menus and lists. 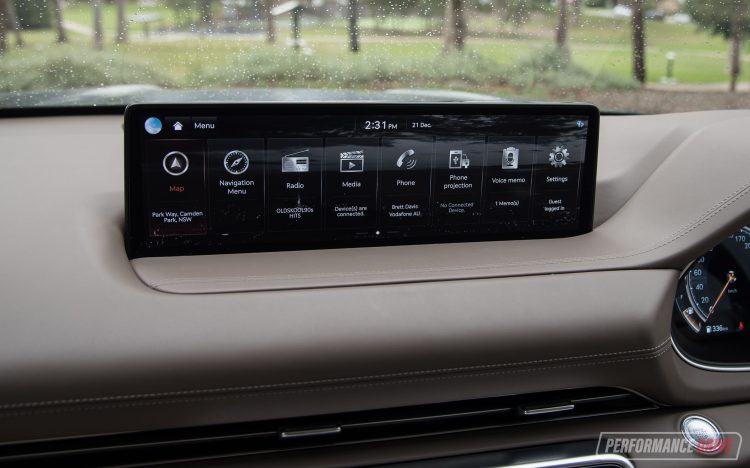 For example, to browse through radio stations you have to make at least two selections, including hit a ‘list’ option. Usually, you just hit radio and the list shows up automatically. There are a couple of other instances like this where we think some fine-tuning is needed for smoother operation, and less distraction.

Rear seat passengers hardly feel left out. It is almost ridiculously over-accommodating, and this example features full electronic adjustment for slide and recline. There’s also seperate climate control and three different charging facilities on the back of the main centre console. We love the high-quality carpet mats, but we’re not sure about the extension of white leather/trim in some places – this test car already had stains on the back of the driver’s seat. We have noticed some carmakers are very selective on where they apply light-coloured trimmings, particularly avoiding high-traffic areas. It seems like Genesis hasn’t considered these areas as much. 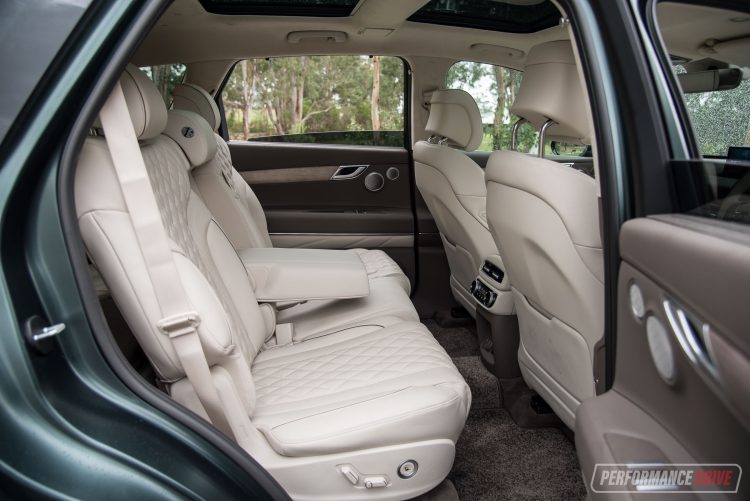 Being a seven-seat SUV, the GV80 3.5T offers excellent family touring capability. The third row offers heaps of space for this class, too. In fact, as long as you aren’t a professional basketball player you’ll likely find high levels of comfort back here. As a guide, I’m about 170cm tall and fit in nicely, with decent head clearance and legroom. The floor does drop down a bit as well, providing space for your legs to fall – unlike some 7-seaters where you feel like you’re sitting on the floor. Seperate climate vents, manual temperature control and a 12V socket add convenience. 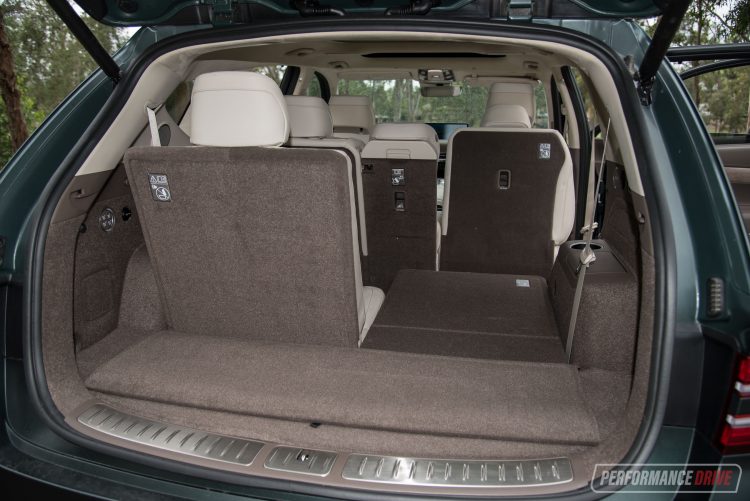 The GV80 debuts a brand new engine from Hyundai Motor Group. It’s an evolution of the Kia Stinger’s 3.3-litre twin-turbo V6, with capacity expanded from 3342cc to 3470cc. It comes with both direct and port fuel injection, as opposed to just direct, and the compression ratio is raised from 10:1 to 11:1.

At its peak, the ‘G6D’ unit develops 279kW at 5800rpm, and 530Nm between 1300-4500rpm. These are some pretty good figures for a non-performance large SUV. All of that is sent through a torque-convertor eight-speed auto and into an on-demand all-wheel drive system. Genesis claims flat-out acceleration from 0-100km/h takes 5.5 seconds. However, our testing revealed a time of 6.49 seconds. We suspect our slower time was a result of this test car being fully optioned and in its heaviest form.

The powertrain feels lovely and smooth on the road. That low-down torque really helps to get you moving without much effort at all, and the top end is supported by strong surge, and a comforting V6 roar. Once again with modern cars, it is disappointing to hear fake engine sounds being emitted through in-cabin speakers. Called Active Sound Design, you can toggle through Low, Mid and High settings. And, fortunately, you can turn it completely off and just listen to the natural sound of the engine. It is very quiet but that’s totally fine by us. It suits the car perfectly. 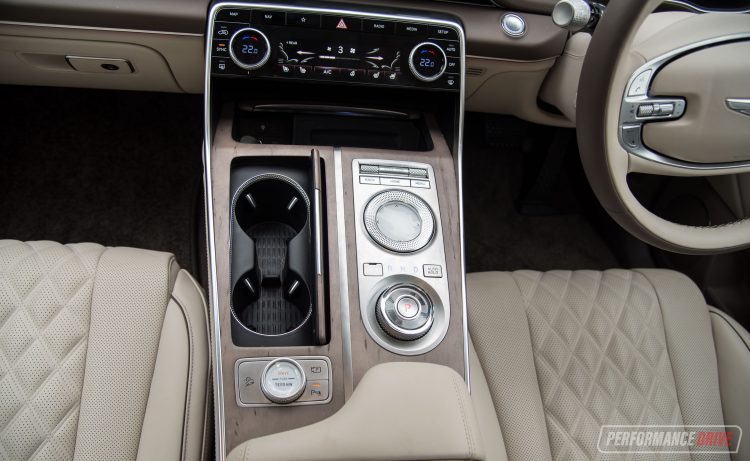 On paper the official fuel consumption average is an eye-opening 11.7L/100km (we averaged 13.7L/100km). That probably doesn’t sound too bad if you’re stepping out of a V8, or a vehicle from around 2010. But this is a brand-new model, with a fresh engine. This could have been a great opportunity for Hyundai Motor Group to introduce some fuel-saving mild-hybrid tech like many of the rivals have since done.

For example, a Range Rover P400 Vogue (that’s the big daddy one) features a mild-hybrid 3.0-litre inline-six that generates 294kW and 550Nm, yet its official consumption rate is just 9.4L/100km. And if you look at some of the German rivals, you’ll see you can actually get a 350kW-plus twin-turbo V8 that consumes less. For example, the 390kW BMW X5 M50i uses 11.5L/100km on the same official average. And that’s a performance model.

The emissions on this Genesis are also quite high for a modern vehicle, rated at 273g/km on the combined test. And it only meets Euro 5 regulations. Again, the engine delivers ample power and torque, and is otherwise a very refined and smooth unit, but for a brand new engine we were expecting better ratings than this. Even that V8 BMW mentioned emits fewer emissions, at 263g/km. To us, this just isn’t good enough, especially coming from a massive multi-national company. 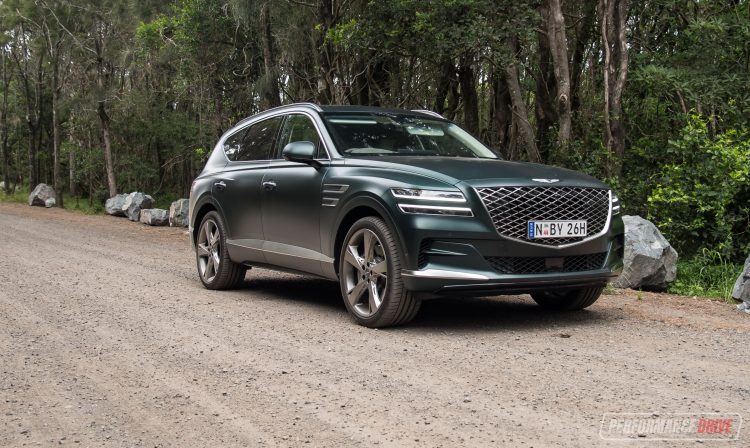 An area that could really help with all of this is weight reduction. This has a tare weight of 2248kg. Even that massive Range Rover weighs less, at 2199kg tare. We could excuse Genesis in some of these areas as it is a young and upcoming brand. However, as we learned at the beginning, the asking price is quite close to the veteran rivals. We guess some of these specification deficits justify the price premiums of the others.

It probably seems like we’re really criticising the GV80 now, but most of this stuff we’re talking about is not our opinion. It’s all just straight facts. But when in comes to areas that do stimulate opinion and emotion, the GV80 starts to win a lot more ‘PD credits’. Feelings of soothing comfort, utter relaxation and a sense of pure opulence easily take over.

This is a much more peaceful SUV to drive than most of the European rivals. The suspension is soft and absorbent, and the steering is light and consistent without being too focused or busy. Along a highway or cruisy country road, the drive experience is just beautiful. It’s only when you throw some high-tempo corners into the mix that things become a bit anxious. 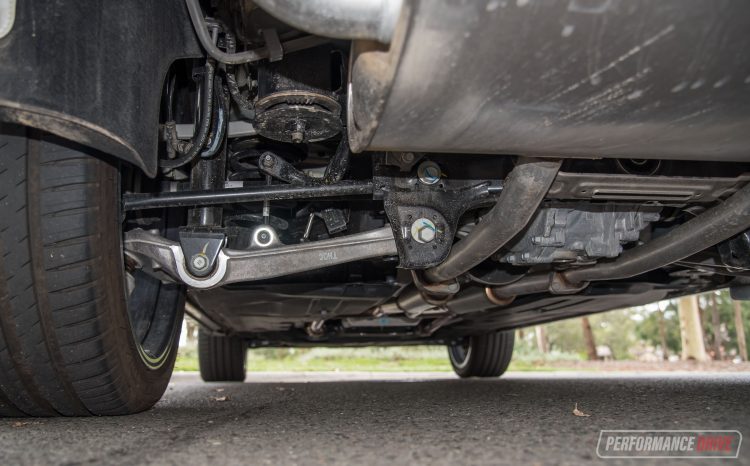 The soft suspension is too soft to enjoy a spirited blast down a mountain road, and on bumpy or undulating surfaces the back end can bounce up and down like a yacht on a rough sea. As a result, it’s not as confident or as planted as some of the Euro rivals. Again, we think the hefty mass really makes a negative impact here.

Instead of expecting performance and handling, which, admittedly, is what the Euro rivals have, for some reason, aimed for in this segment, the GV80 needs to be appreciated for being a luxury car. Yes, it’ll do 0-100 quick enough and yes it goes around corners quick enough. But we think these are not focus areas for the GV80. It goes about its business majestically rather than fuelled by testosterone and competition. And we admire that and think most buyers will too. Probably more so than admiring the performance and handling of the rivals. Especially since an SUV is not meant to be a performance car in the first place.

This is a really likeable SUV, and honestly there aren’t many downsides. For us though, our main concern is the new 3.5T engine. In the face of the really high-tech stuff coming out of the rival brands, this unit already seems out-of-date in terms of fuel economy and performance. The overall vehicle weight is also worrying for a brand new model, which also impacts performance and economy.

As a first crack at an SUV though, Genesis has created something quite unique for this competitive market segment. It is more of a luxurious proposition than many of the established rivals, and by far one of the most comfortable inside. The standard features list also blows most of the competition out of the water. Our pick would be the 2.5T AWD, with the Luxury Pack as featured here.

CONS:
– Very heavy
– Not as confident or precise in the corners as Euro rivals
– Very thirsty; might as well be a twin-turbo V8