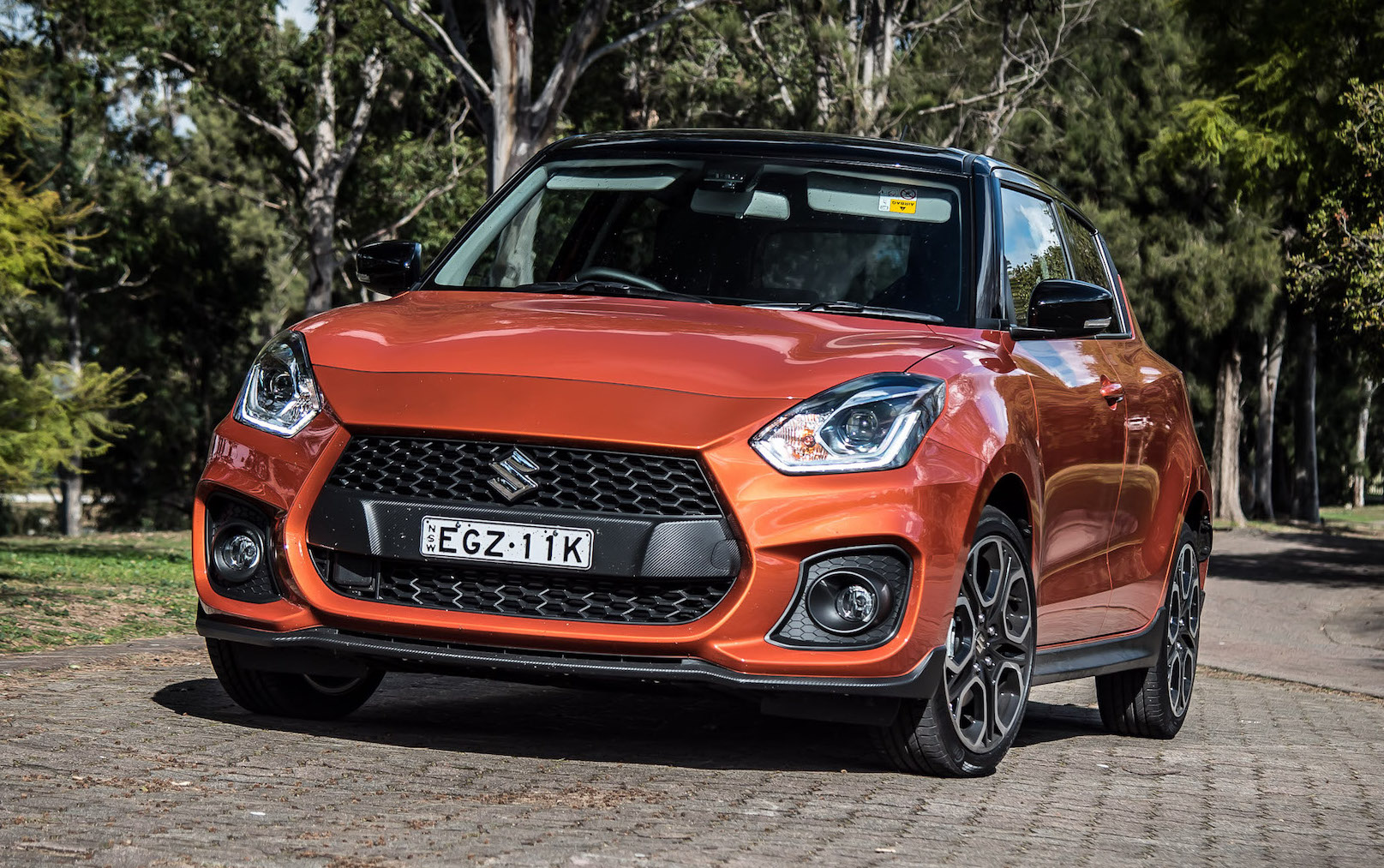 The 2020 Suzuki Swift Sport Series II is affordable, fun, capable in a variety of circumstances, and it surprises you with its packaging, safety and features. Is there anything not to like? 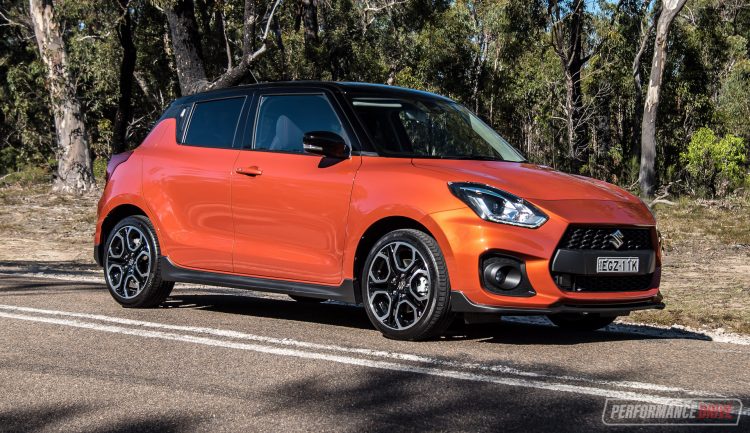 The 2020 model, or Series II as it’s known, is a mild update to the already sound Series I which was launched in Australia early in 2018. Suzuki hasn’t mucked around with the original foundations, only enhanced safety and provided more pizzazz.

Here we’re looking at the manual version, which kicks off from just $26,990 (up $1500 from the 2018 model). Buyers can also opt for a six-speed auto, priced $2000 north. Aside from the transmission choice, there is only one variant available. The only option is metallic paint ($595), including this new two-tone Flame Orange metallic with a black contrast roof ($1095). 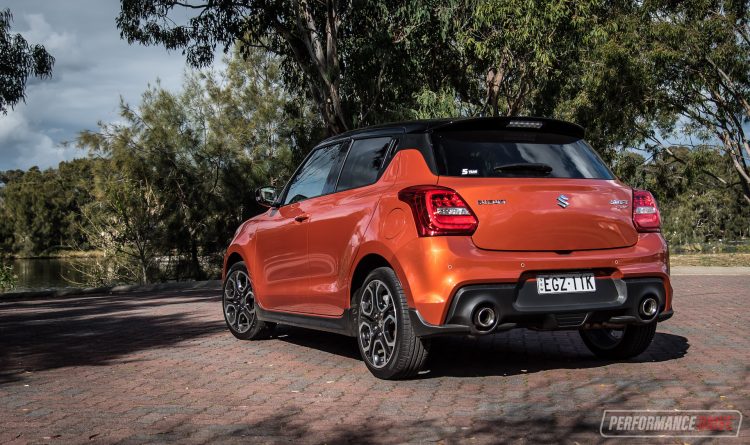 You’ll be amazed by just how roomy the latest Swift Sport is inside. Suzuki has designed the cabin so it’s quite tall and upright, resulting in more than adequate headroom in the front and back. It is a narrow cabin, obviously, but it doesn’t feel cramped. There’s even enough room for a slender-but-useful centre console to run through to middle.

Twin cup holders at the front, a dish for your phone and/or wallet or purse, and another cup holder at the rear of the console mean this is a car that will help you get on with your day. You don’t have to go hunting for storage options, and it’s pretty difficult to lose anything in here because you can essentially see everything. There are bottle holders in the doors as well. 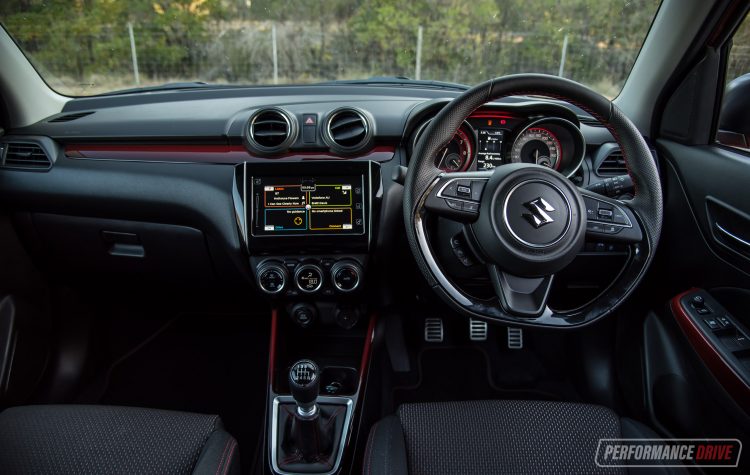 This is a very practical and thoughtful interior for this class. Sure, some of the trimmings and materials are a bit crude or low rent, but you really don’t feel shortchanged when considering the starting price. And some of these lower-grade materials, such as tough but scratchy plastics on the doors, don’t seem to ruin the cabin acoustics. It all feels tight and there’s none of that tinny echo you get from some budget vehicles.

What’s new for the 2020 Series II? Suzuki has provided a digital speedo for the driver, and blind-spot monitoring, rear cross-traffic alert, and heated side mirrors are introduced to improve safety. That’s on top of the already-standard low and high speed autonomous emergency braking with adaptive cruise control. Seriously. We’ve come across some $100k cars that don’t even come with this as standard. 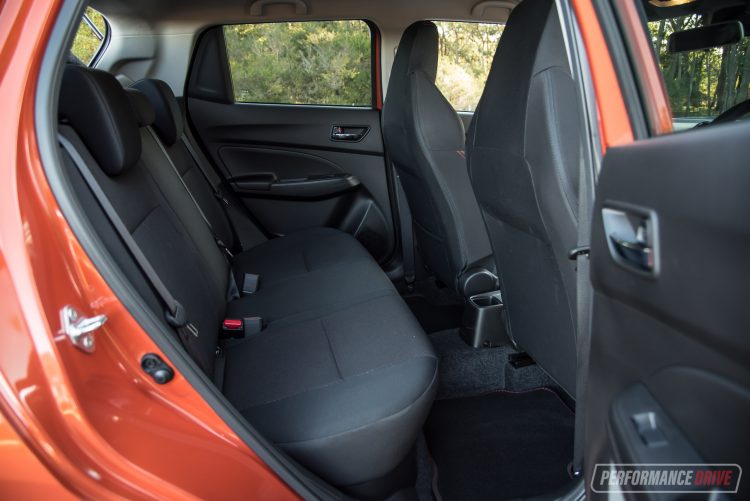 Up on the dash is Suzuki’s standardised 8.0-inch touch-screen media interface. This is the same screen used in all Suzuki models now, and it comes with Android Auto and Apple CarPlay, a rear-view camera, and satellite navigation. In the case of the Swift Sport, it’s also paired to a decent six-speaker sound system.

Boot space remains unchanged, measured at 265L or 918L with the rear seats folded down. There is no spare wheel under the boot floor, only a puncture repair kit. 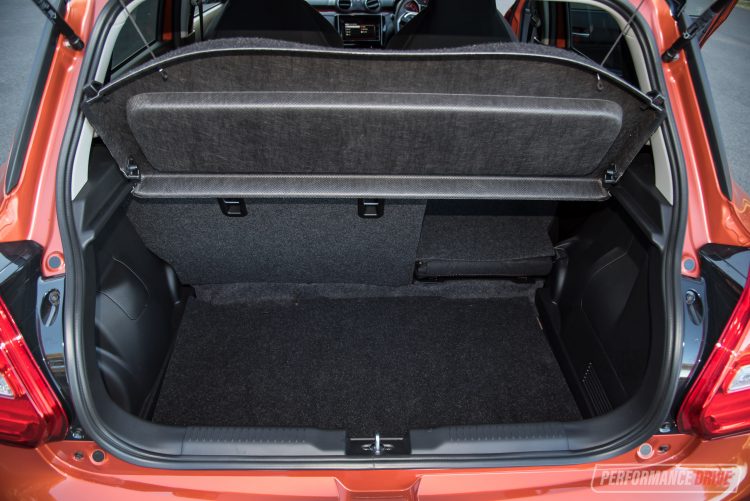 This is definitely one of those cars that you want to take for a drive just for the sake of going for a drive. It really is. We took this for a random drive down to our old favourite testing road just to rekindle with the Swift Sport, following our test in 2018. The drive inspired us to invent a new style of video format for our PDriveTV YouTube channel. We called it Four-minute Fang. It’s embedded below.

Let’s go over why and how it’s a great driver’s car. Firstly, the fuel consumption. The official average is 6.1L/100km. However, during our week-long drive – which including 0-100km/h testing and the Four-minute Fang video – the trip computer (reset at original pick up) said 5.9L/100km. How humble and modest is that? It chews less fuel than it claims. And it’s not like the official rating is high. This means you can drive and drive and it won’t cost you an arm and a leg. The fuel tank is only 37 litres too, so it’s nothing to fill up. 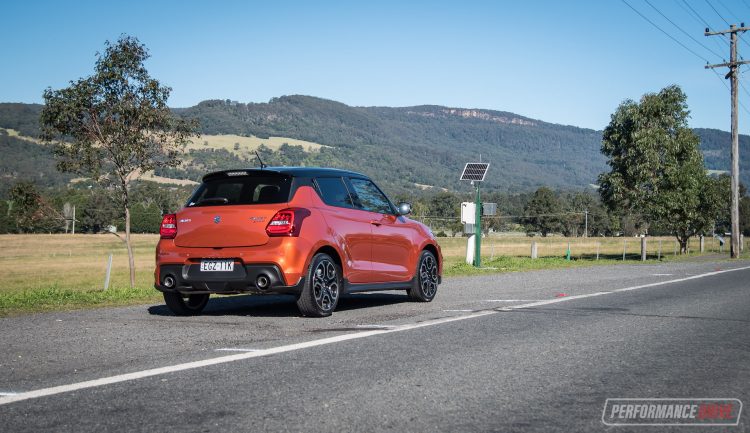 The clutch is light yet feelsome. The steering is a proper mechanical, hydraulically-assisted type, so it provides excellent communication. And the suspension comprises of MacPherson strut front and a Torsion beam rear end with coil springs, dampened by Monroe shocks. There’s also Teflon-coated stabiliser bar seats to reduce friction.

We’d described the ride quality as absorbent and responsive but without stepping over into the too-firm corner. This isn’t regarded as a hardcore hot hatch and it never said it was trying to be one, but it does handle like one. You can really throw it around and it just hangs on and performs like a pro. A lot of that has to do with this suspension and steering setup, but also to do with the fact the manual version weighs just 945kg (tare). That is insanely light for a modern car filled with advanced safety tech and all of the latest gadgets. 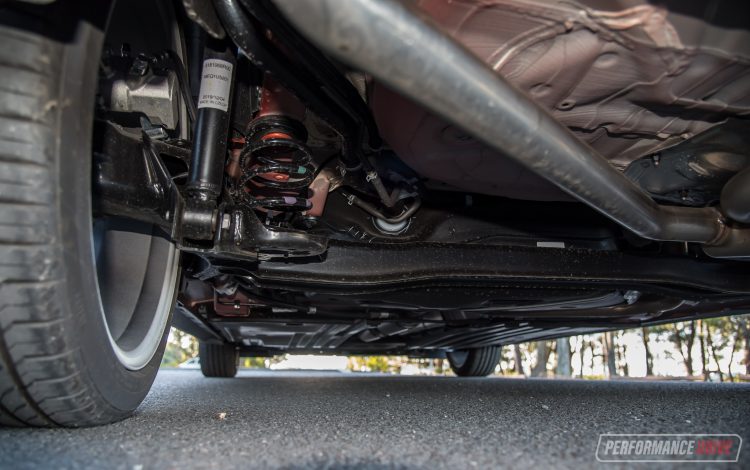 Lastly, the performance. Yes, it is only a 1.4 turbo – the same engine that’s featured in the Vitara. With 103kW and 230Nm, available from 5500rpm and between 2500-3000rpm, respectively, the power-to-weight ratio is about the same as a Hyundai Veloster Turbo or a Kia Cerato GT. You can leave it in third gear and easily pull away from roundabouts, because there is no weight to lug about, or you can rev it out and enjoy it as a sports car.

The engine surges and there’s a faint turbo whistle during low revs. In fact, throughout the lower half of the rev range the engine sounds good. There’s a bit of bass to it. However, we can’t help but wonder what it might sound like with a very mild sports exhaust option, or even a cold air intake. That’d be just about perfect. 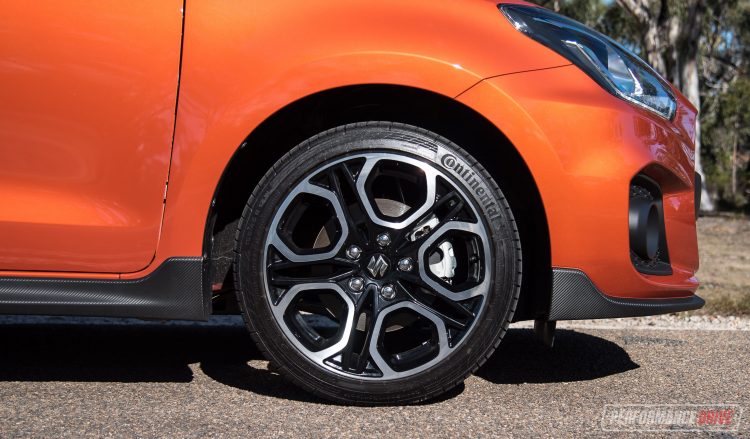 Flat out, we timed a best 0-100km/h sprint in a respectable 7.36 seconds. Some of our keener and more loyal readers will remember the 2018 model we tested in 7.39 seconds, with the auto clocking 7.01 seconds. This is a swift little machine when you want it to be (see what we did there), and effortless when you just want to cruise.

All of these characteristics mentioned above make it such a well-rounded vehicle. It doesn’t matter if you’re simply driving to work on a cold Monday morning or going for a Sunday blast to your favourite pub for lunch. This thing has a habit of livening up your day. Even if you already were livened up, you’ll be even happier when you arrive. Actually, that’s a bit of a lie. It’s more likely you won’t want to get out.

Yep, the current-gen Swift Sport, regardless of the Series II update, remains as one of our all-time favourite cars on the market. It does so much yet it asks for so little, in price and fuel. All you need to do is decide what colour you’d like, and whether you’d prefer a more active drive with the manual or a simpler journey (albeit quicker, according to our tests) with the auto. There’s nothing more you need to know from us. It gets our full recommendation.