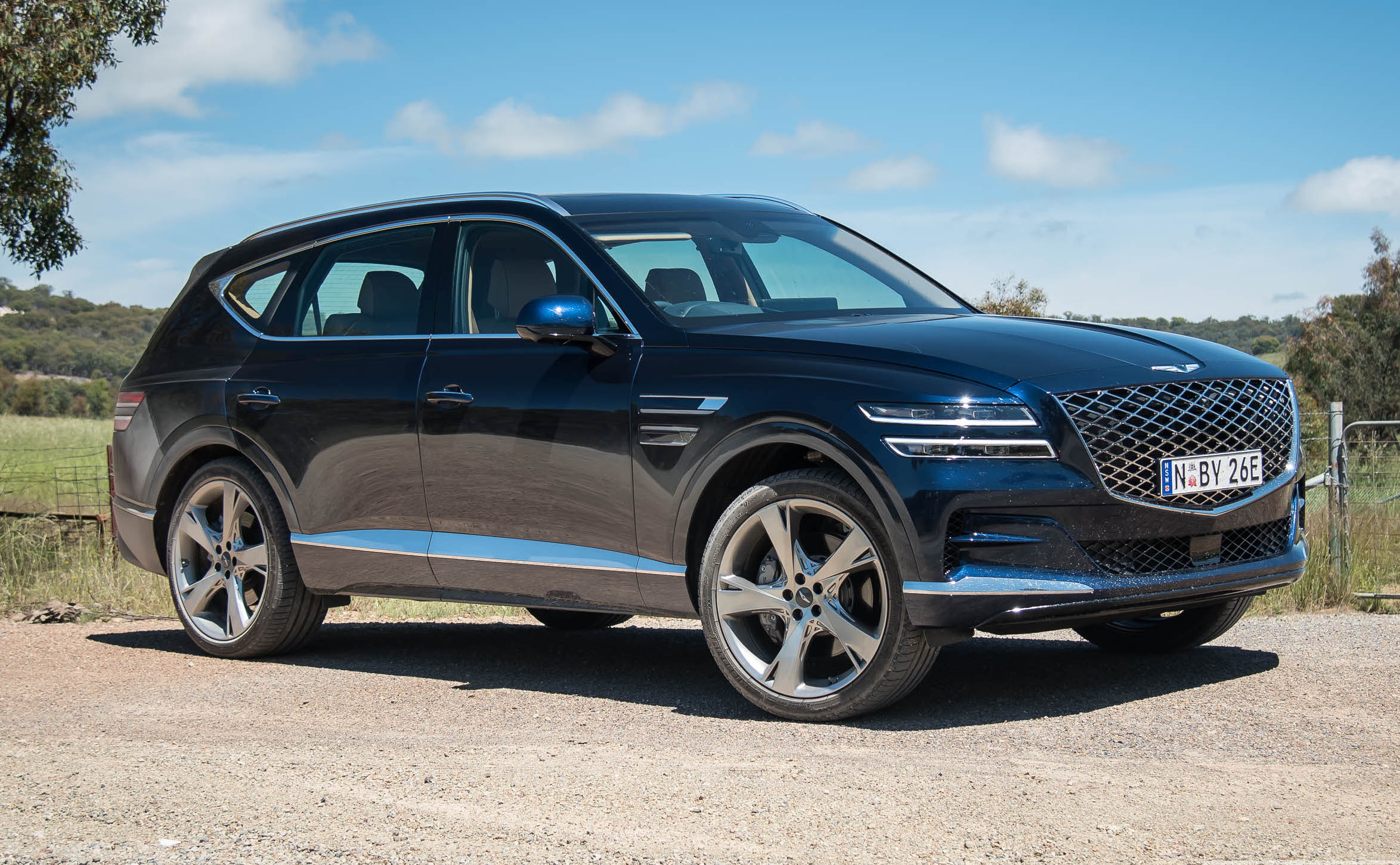 What’s this? Is it an Aston Martin? A Bentley? Maybe it’s a Rolls-Royce? Nope, it’s the 2020 Genesis GV80. Otherwise known as the company’s first foray into the magnetising world of SUVs. 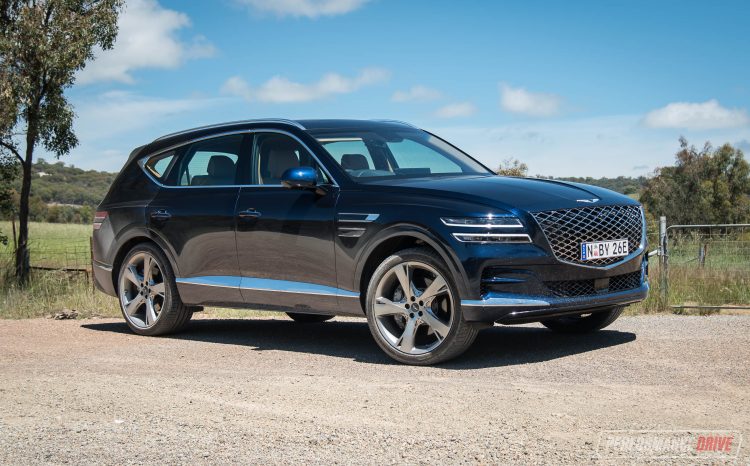 Genesis, a luxury carmaker owned by Hyundai Motor Group, is slowly but surely rolling out more and more models to ensure its portfolio covers more of the market. The GV80 is its large premium SUV, targeting the likes of the Audi Q7, BMW X5, and Mercedes-Benz GLE. On its side is a distinctive and sophisticated design, inside and out, some interesting new engine options, and one of the most comfortable cabin environments in the class.

Three main variants have just hit Australia, including the 2.5T RWD and AWD, the 3.0D AWD, and the 3.5T AWD. Prices start at $90,600, and top out at $108,600 (excluding on-road costs). That includes a segment-leading five-year/unlimited kilometre warranty, along with five years free scheduled servicing, and five years roadside assistance and valet. In terms of after-sales care and coverage, none of the competitors get close. 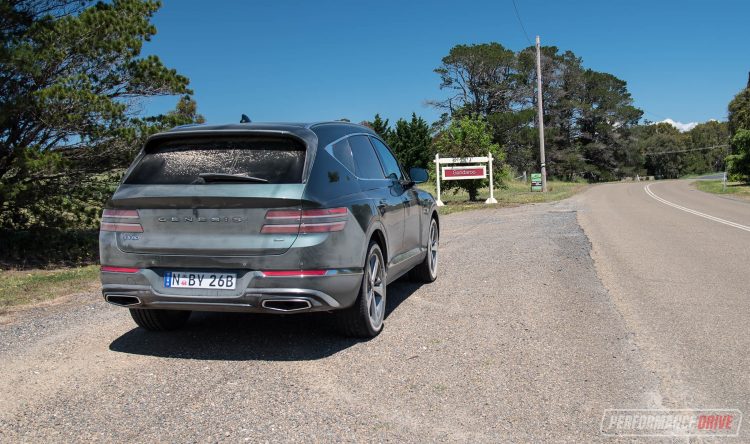 We really like that Genesis hasn’t bothered copying the existing, albeit popular, German rivals. They all seem to look pretty much the same these days. This is fresh. This is different. And, we must say, it definitely captures your attention. Genesis likes to talk about parabolic lines and athletic elegance and other marketing fluff, but the point is, it looks like a freakin’ Bentley.

And we mean that in a good way. This is much grander and more imposing than most of the competition. We guess the Volvo XC90 also has an impressive stance, but that has been around now for almost five years. From the massive crest grille to the slab-like body with ironed panels, the horizontal-themed headlights and taillights, it is very sophisticated and very definitely premium. Nobody is ever going to tease this as ‘just a Hyundai with a big price tag’. It looks very expensive. 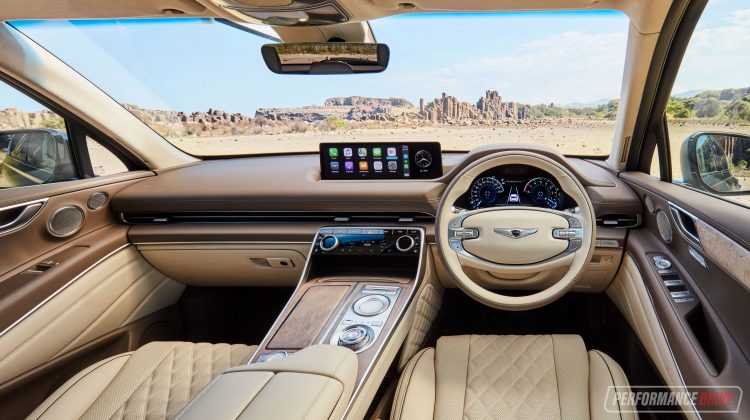 The same thing can be said about the interior. Genesis has obviously worked really hard to ensure this premium offering does actually live up to, or even exceed premium market standards. Genesis Australia says it has packaged local-spec models with high equipment levels as standard. For example, our vehicles get extended leather and are available in a bunch of no-cost lush colour combinations. We also get real wood trimmings.

It all feels really well made, too, with no creaks or rattles to be heard. We like the attention to detail that Genesis has applied, including matching dots pattern on the speaker grilles with some of the stitching and trimming details. There’s also no hard plastics on the upper half of the B-pillar, like there is in some rivals. Overall, it is a really nice ambience. 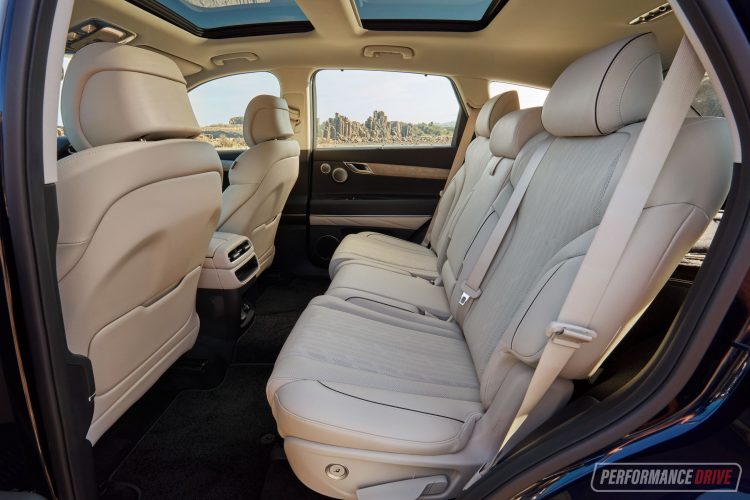 Passenger space is excellent in the front, with a tall ceiling likely accommodating even basketball players, and the front seats offer a wide range of adjustment to find a natural and comfortable position. Adjusting the seating position via the buttons on the side prompts a neat display to appear on the infotainment screen, letting you know what area of the seat you’re adjusting.

As for the infotainment system, it incorporates a huge 14.5-inch wide-screen display with touch-screen capability. Users can also navigate through the menus and functions using an interesting turntable-style controller on the console. It does take some getting used to, but it could help to reduce distractions commonly involved with reaching up and touching a screen. 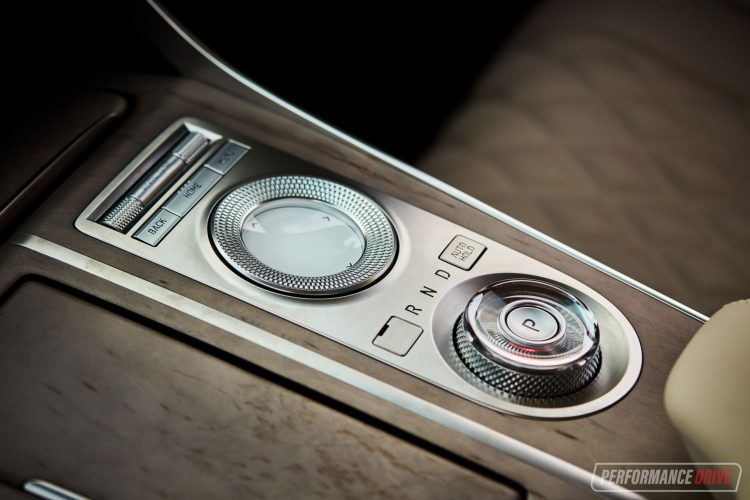 All models in Australia come with a thumping 21-inch Lexicon by Harman sound system. It’s a fantastic unit, and easily betters some of the standard rival setups. This is another area where the local arm has sourced the best bits and included them as standard. Android Auto and Apple CarPlay are standard, along with digital radio, wireless phone charging, and a surround-view parking camera system.

Unlike some rivals, the GV80 comes standard with seven seats, except the entry RWD 2.5T. The third row comes with its own climate vents and charging ports, like the second row, and the seats fold down completely flat and out of the way. In five-seat configuration the boot is measured at 727L, or 2144L with the two rear rows folded down. 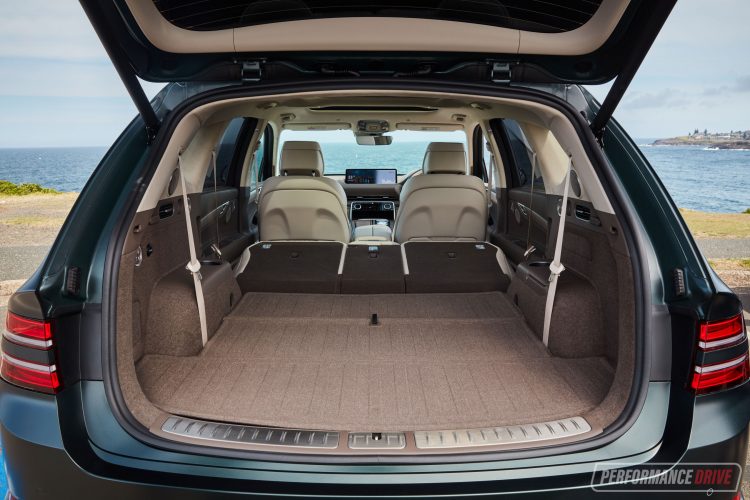 Out on the road we had a drive of all three engine options. Firstly, we’d recommend you don’t automatically relegate the 2.5T to the reject bin. This is a brand new unit by Hyundai Motor Group, producing a decent 224kW and 422Nm. We’re not a fan of the fake engine sounds coming through the speakers inside, as it makes it sound like a generic car in a computer game that isn’t a car game. It’s dumb. Manufacturers really need to fire these so-called engineers who keep coming up with this crap.

Aside from the in-cabin sound, the 2.5T provides a rewarding shove when you put your boot into it. However, when it comes time to cruise, this engine is smooth and presents adequate torque for effortless driving. We managed to find a straight bit of road to do some 0-100km/h runs with the Vbox during this launch event. The best we could manage was 7.16 seconds, which, compared to the entry level Euro rivals, is outstanding. Genesis claims 6.9 seconds. 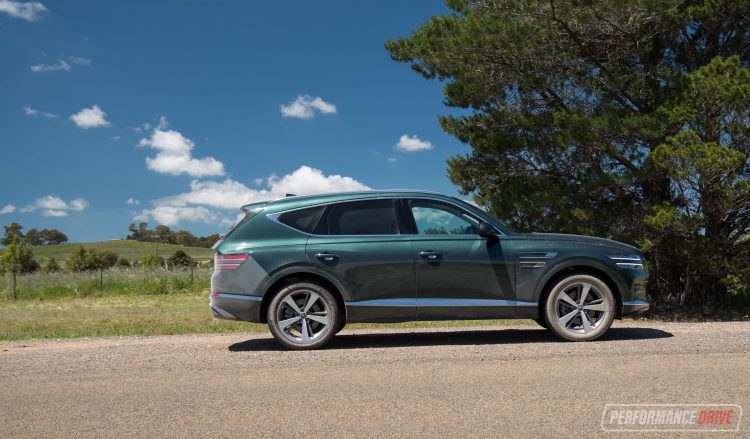 Moving up to the all-new 3.5T, this is essentially an evolution of the 3.3 twin-turbo that has actually seen service in the overseas-only G90 sedan for quite some time. Although 279kW is impressive, it’s the very broad torque delivery that does it for us. All 530Nm is available from a low 1300rpm and held until 4500rpm. This engine doesn’t provide enormous grunt up high in the revs. Instead, it seems to be more at home surging in this mid-range. It is thirsty though, consuming 11.7L/100km on the official average. We also timed some 0-100km/h runs with this, with a best result of 6.35 seconds. Genesis claims 5.5 seconds.

As for the all-new 3.0-litre turbo-diesel inline-six, this is probably one of the most interesting units of the three. It generates 588Nm from 1500rpm to 3000rpm, and then peak power comes in at 3800rpm. We were expecting quieter running, particularly in the lower revs. We were also expecting a bit more of a push from low speeds. But instead, you can hear minor diesel clatter at certain points of the rev range, and the engine delivers a very linear output, which can make it feel less dramatic. We timed 0-100km/h in a respectable 7.31 seconds. Genesis claims 6.8. 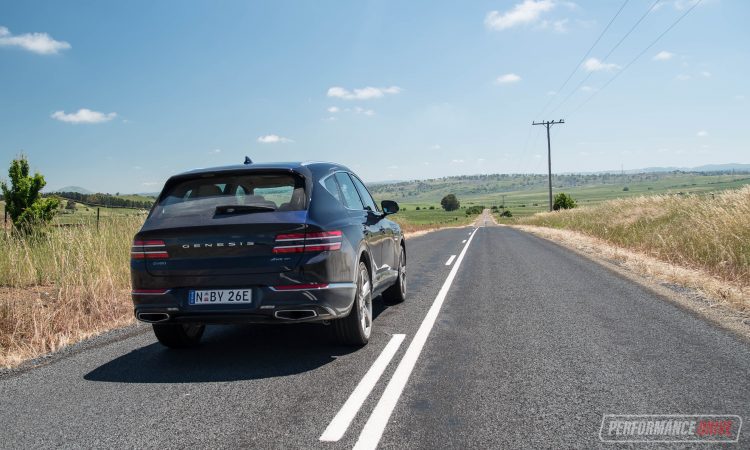 All engines are mated to Hyundai’s own eight-speed automatic. In normal driving conditions the transmission seems intuitive and reasonably responsive, but we think smoothness could be improved. During our tests we experience very slight driveline shunt on low throttle application, such as when coasting on the highway. Although there are paddle shifters, it will automatically upshift if you don’t, so they are a bit pointless. But that’s probably not going to be any sort of issue for the majority of buyers.

What will appeal to buyers, especially the more typical luxury car buyers, is the ride comfort. Genesis Australia has applied its own unique tune to suit our conditions, and, well, country roads are soaked up enthusiastically. It does weigh over 2.1 tonne in most cases, so it’s almost a steamroller as it is. 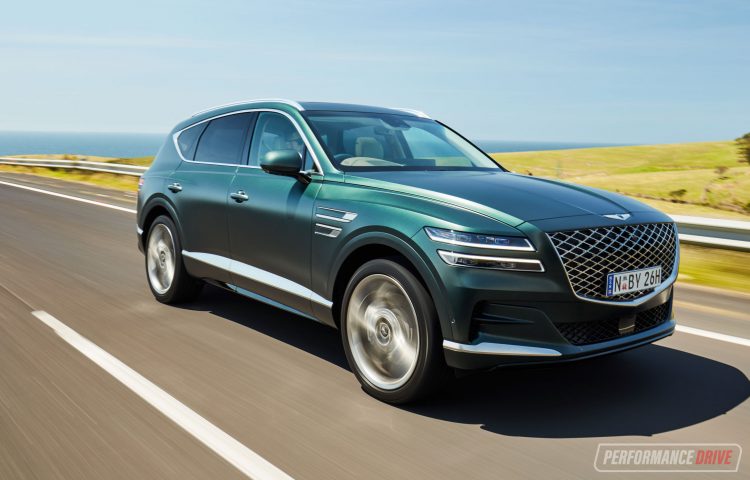 In the 3.5T and 3.0D you get adaptive dampers and an innovative new tech called “Road Preview Genesis Adaptive Control Suspension (GACS)”. It essentially reads the road surface ahead and can adjust the suspension in anticipation of bigger bumps and dips. During our test drive in country ACT, there were times it felt like it braced for bumps, but then other times it may have been our imagination. One thing is certain though, this is a very comfortable and relaxing SUV, even on poor quality roads.

With no weight in the back the rear end does bounce around a bit. This can be reduced by activating the Sport mode (in the upper models) or by setting up a Custom mode to dial in the dampers. In almost all circumstances the GV80 is pleasant. When you start pushing it hard, that hefty weight becomes more apparent, and the suspension can feel a bit cushy and floaty.

Well, this is an extraordinary attempt at taking on the established Europeans in this space. The grandeur design, plush interior, and sheer equipment and standard inclusions should attract plenty of buyers. That five-year warranty plan and free servicing system is also going to do wonders to reel in customers.

Our pick would be the 2.5T AWD. It still comes with most of the creature comforts and looks pretty much exactly the same, but it carries less weight (especially over the front end) and it offers similar performance to the 3.0D. The 3.0D is also an interesting option, given it provides lots of soothing torque to get this majestic beast moving. But the official fuel economy of 8.8L/100km isn’t all that frugal for a diesel.

We don’t see much justification for going for the thirsty 3.5T, even though it seems like a great new engine. In this application, where luxury overshadows sportiness by some margin, the fuel consumption just doesn’t make sense for the performance it provides. For example, the 390kW BMW X5 M50i, albeit $140k, comes with a twin-turbo V8 that has an official average consumption of 11.5L/100km. That’s 200ml less than this V6.

Genesis is clearly finding its stride now and forming its own groove in the market. This GV80 is no doubt another sign of positive things to come from the Korean auto giant.