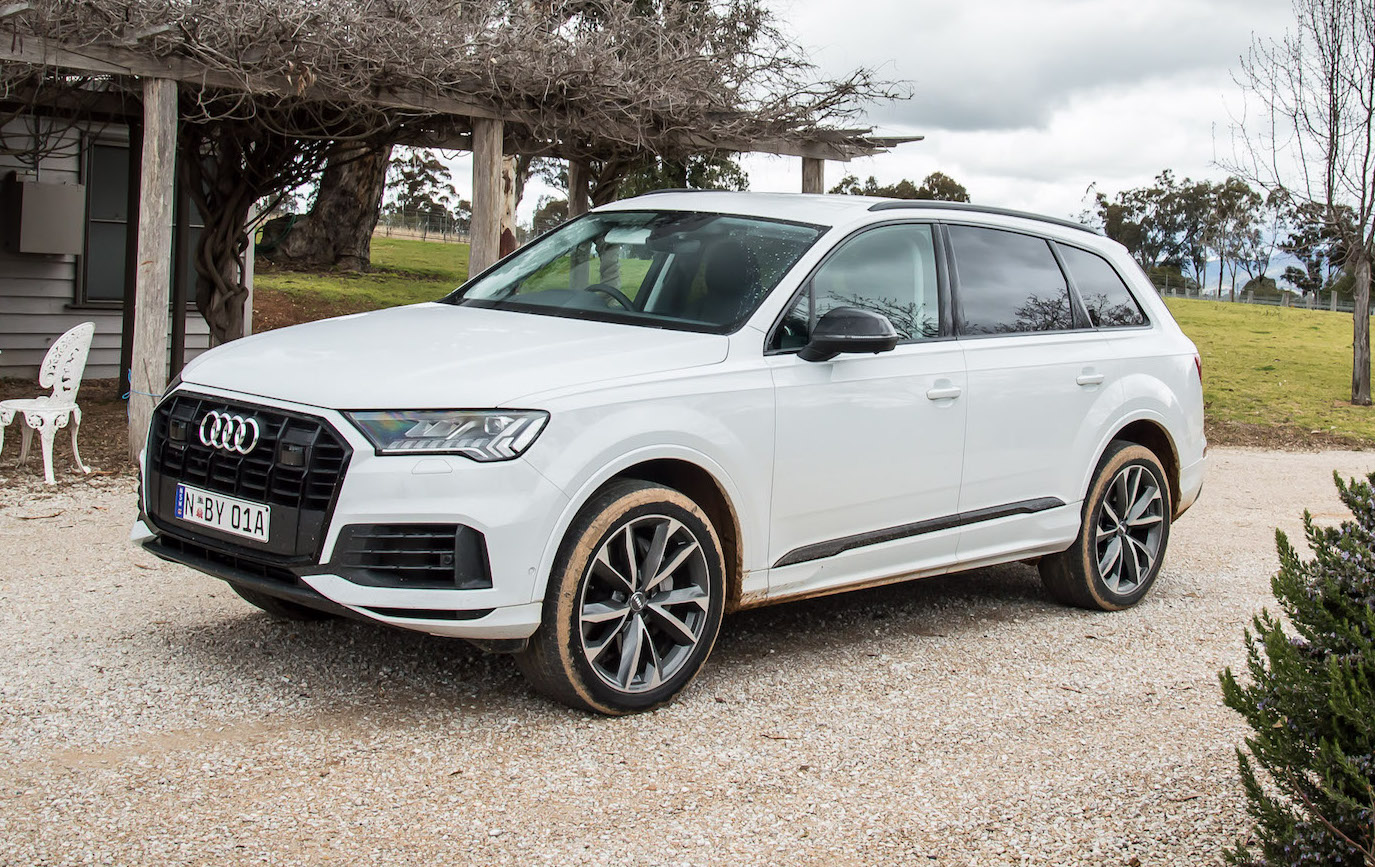 Audi has turned into a king of SUVs nowadays, with no less than six in its current catalogue. At the top of the realm in terms of size stands the seven-seater Q7. 2020 brings a facelift to the second-generation to take on the likes of the BMW X5, Mercedes-Benz GLE, and Volvo XC90 with a bolder, smarter and more luxurious package. 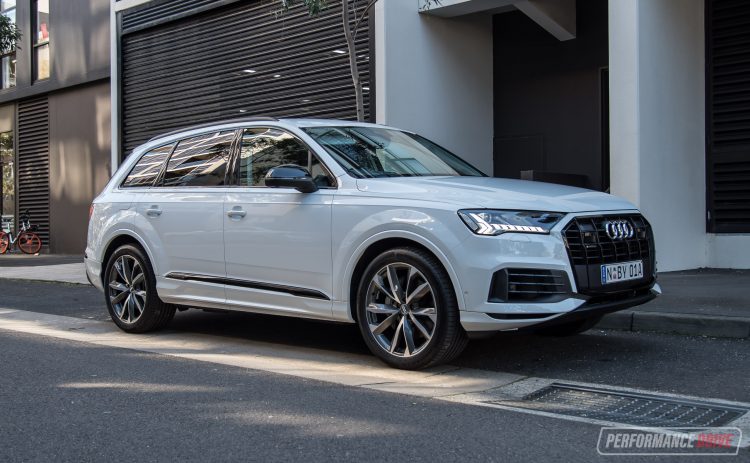 As some European luxury brands like Volvo move away from diesels, Audi offers nothing but a diesel in the Q7 (including the SQ7). Australian buyers are offered the same 3.0-litre turbo-diesel V6 in two specs; the 45 TDI outputs 170kW and 500Nm, and the 50 TDI boasts 210kW of power and 600Nm of torque.

All variants come with a velvety eight-speed automatic, Audi’s famous quattro constant all-wheel drive, and seating for seven humans.
Today, we’re putting the entry 45 TDI through the ropes by taking it to the beautiful Central West region of New South Wales. 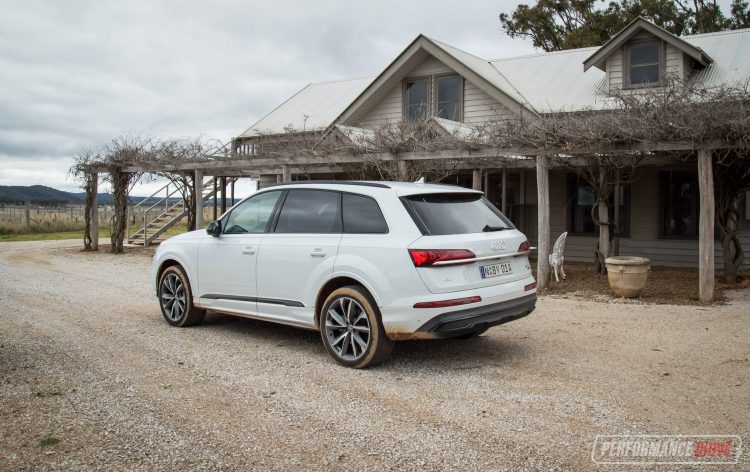 Some enthusiasts may already know the Audi Q7 shares the same MLBevo platform and underpinnings as many other high-end SUVs within the VW empire, including the Volkswagen Touareg, the Porsche Cayenne, and even the Bentley Bentayga. But each brand applies their unique design language, suspension setup and powertrain offering. Direct from the Audi factories in Slovakia, the Q7 adopts much of Audi’s latest design theme. This is vastly made up of smooth sheet metals (including lightweight aluminium) and flat panelling with only subtle but sharp creases that flow aerodynamically from front to the rear.

The 2020 Q7 also brings in Audi’s huge new thinly-framed black grille and lower grilles at the front. Your eyes are drawn to beautifully crafted LED lights at the front and rear, which look crisp and very elegant at night time. The rear is made up of many horizontally imposed lines and a strong chrome strip that joins the taillights. This horizontal theme makes the Q7 appear wider than before. Overall, the Q7 measures 5063mm long, 1970mm wide, and 1741mm tall. It’s big. 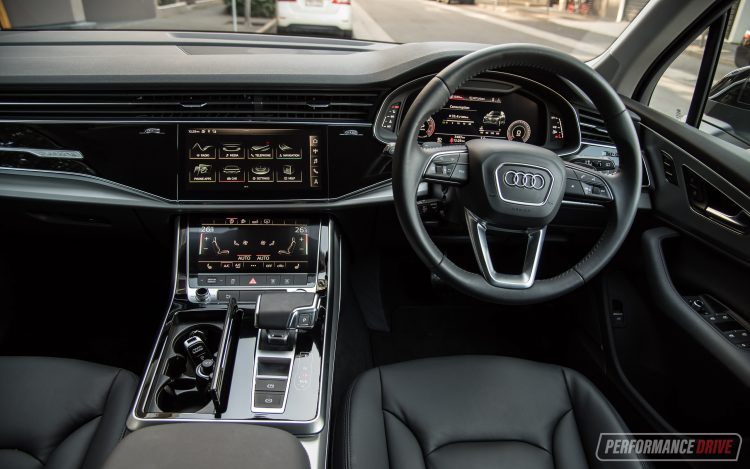 Stepping into the Q7 is like getting a lesson on class and sophistication. The interior is full of glossy surfaces, brushed metal, elegant and bright lighting and huge digital displays. The dash is shaped as one long integrated unit that is bridged together by a continuous air vent. Like with other luxury makes, the centre console sits high up to make everything more reachable from the driver’s position. At night is when it all comes alive; everything glows thanks to colour-changeable ambient lighting. It looks brilliant.

There is an abundance of room to stretch out and relax, like we did on our trip, no matter whether you’re in the front or second row. The third row is a little smaller and more difficult to get in and out of, but it’s ideal for larger families. And surprisingly, even with the third row in place, you still have 295 litres of boot space to play with. For perspective, the Audi A1’s boot presents 335 litres. 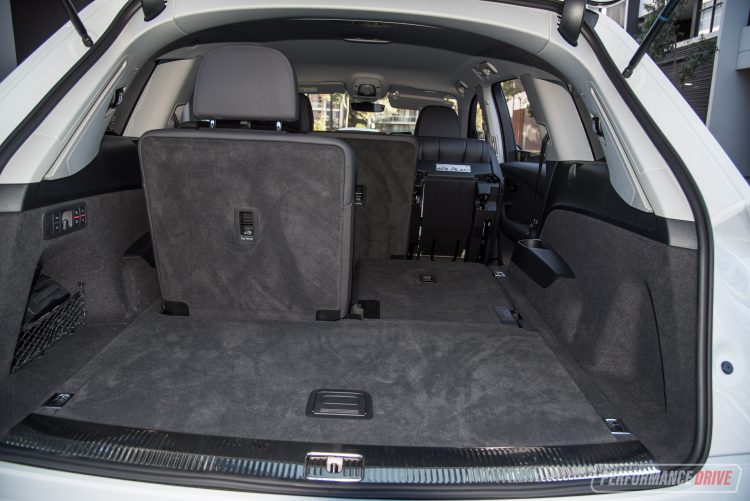 With the third row folded away, you have 770 litres. And the floor area is completely flat and wide, expanding to 1955L with the second row folded down. Officially, in five-seat layout, this makes it 120 litres bigger than the BMW X5, and 120 litres bigger than the Mercedes-Benz GLE. However, both brands have bigger guns to draw with bigger models available (X7 and GLS), but this is the largest Audi SUV you can get. If you want absolute space in this class the Volvo XC90 offers a whopping 1102L in five-seat configuration. We also think the third row is more spacious in the XC90.

Audi Australia has put together impressive packaging for the 2020 model so you get an absolute glut of features and luxuries as standard. But there is an extra charge for the Premium Plus package that adds ambient interior lighting, a premium 19-speaker Bose sound system, electric steering wheel adjustment, and four-zone air-conditioning. The pack also replaces the standard 19-inch wheels and fits these big 21s. 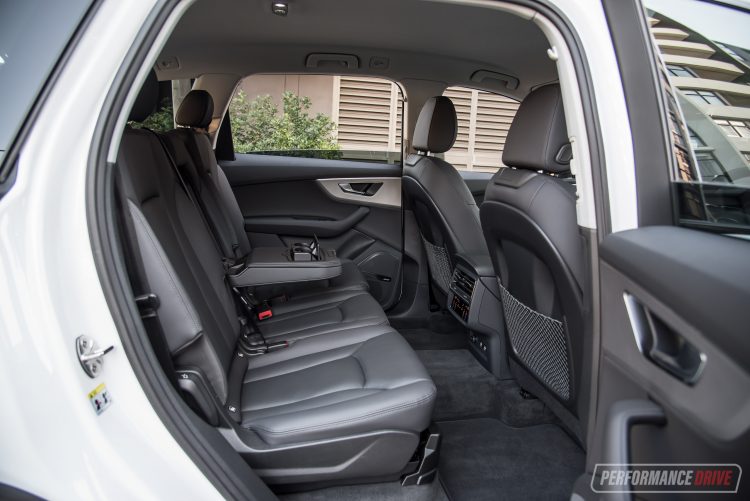 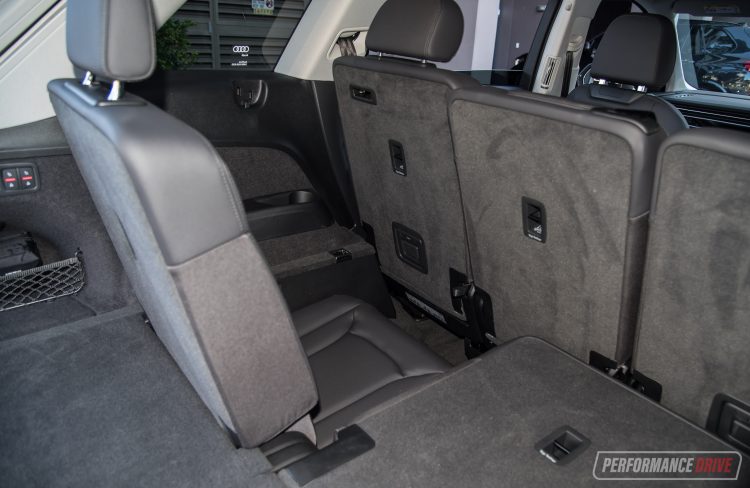 Although the Q7 is a hefty 2240kg, getting it moving might seem like a big task. But the 3.0-litre V6 executes progression smoothly and confidently. We feel it’s a tad devious of Audi to detune this engine from what it is ultimately capable of; it is the same unit in the 50 TDI just with a different computer tune.

Nonetheless, 170kW feels more than adequate to boost the bulky SUV up to speed. Luckily, a generous 500Nm of torque helps you glide up steep hills and pull a load if you’d like to tow as well. On paper, the 45 TDI goes from 0-100km/h in 7.3 seconds. That’s 0.8 seconds slower than the 50 TDI. Our tests revealed a time of 7.39 seconds in the real world. To achieve this time though you need to really build the revs on the brake pedal before setting off. If you simply stomp on the throttle pedal it is much slower; the best we recorded was 8.01 seconds.

This brings about a concerning point. During our test we noticed a big delay in power delivery from low speeds. We can’t tell if it’s turbo-lag or a transmission lag that’s been programmed in on purpose. But from low speeds, such as exiting roundabouts and even departing from traffic lights, there is a canyon of nothingness as the powertrain sorts itself out (see our 0-100km/h video below to see what we mean). We suspect this could be part of initiatives to reduce fuel consumption/emissions. 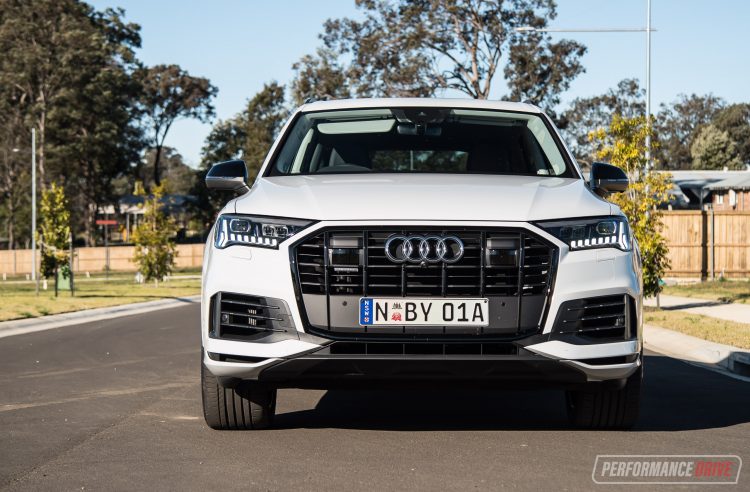 The transmission itself is really smooth in shifting gears and provides good gearing and torque for the given speeds. And thank goodness the German brand hasn’t bothered to revive the CVT autos that it once offered for some models. There is a sport mode specific to the transmission (S mode), and a Dynamic mode for the overall driving setting. The delay mentioned above does seem less obvious in these modes but it means the revs are held too high to accommodate pleasant journeys.

If you’re specifically on the prowl for a luxury SUV with solid towing credentials, the Q7 is the best in the business. It offers a maximum braked capacity of 3500kg. This trumps the BMW X5 30d (2700kg) and the Mercedes-Benz GLE 300d (2700kg). It even matches the Land Rover Discovery, and obviously, the platform-sharing Volkswagen Touareg. 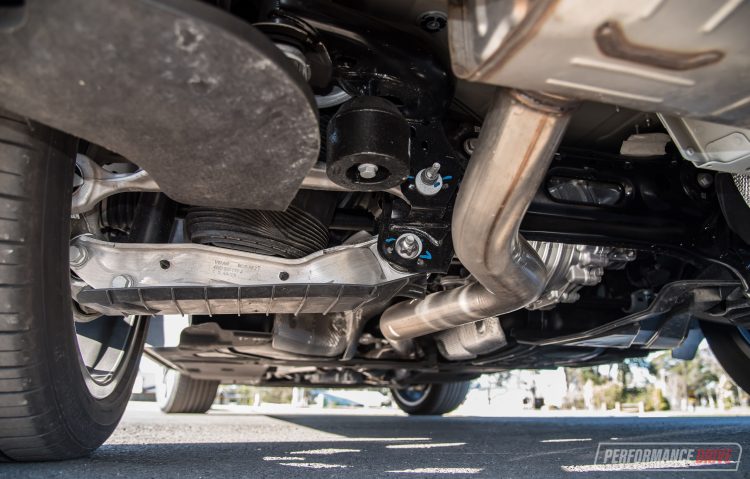 Most owners would not want to take this show pony off-road, but if you do the Q7 performs quite well off the bitumen. And much of it is thanks to auto-levelling and adjustable air suspension. You’ll find many driving modes to choose from that adjust ground clearance, stiffness, steering and power distribution to the wheels to suit the conditions. You can also manually adjust the SUV’s ground clearance, from 155mm in the lowest setting, through to 185mm in the normal setting, and up to 245mm in the highest setting.

That means you can go on roads that other SUVs wouldn’t be able to clear without scraping. Lowering the suspension is also handy for everyday tasks, like packing groceries, or allowing kids to climb in and out. It can be adjusted from the centre console and there are boot level settings from the boot wall when the car is turned off. 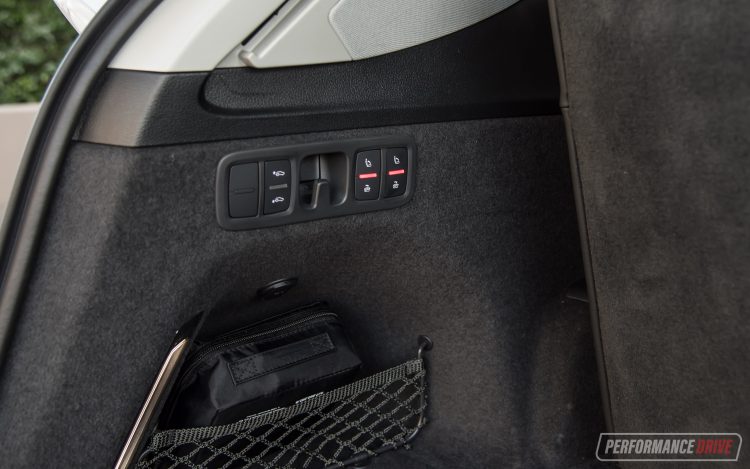 Back on the road we noticed some tram-lining steering pull and tug over oddly-shaped tarmac surfaces, mainly at lower speeds. This is where the SUV gets caught in the momentum of a bump and keeps going in the same trajectory that the bump has sent the car in, for a split second. It’s only minor though.

Being such a big and weighty SUV means fitting and staying centre in lanes is a little more strenuous than you might expect. There is minimal body roll, and the wide 285 tyres (on these optional 21-inch wheels) all round help the Q7 grip brilliantly around fast, sweeping corners. However, the Q7 isn’t the most agile or fun SUV in this class when it comes to dynamic driving. We put the blame on the sheer weight it carries around. Highway driving is very pleasant though, with a reassuringly solid and secure feeling conveyed to the driver, even in wet conditions.

You might think the Q7 is expensive to run. Unexpectedly, the official fuel consumption figure is a low 7.0L/100km. Our real-world average was 8.6L/100km, which included lots of highway driving – still quite commendable. Audi has added some extra fuel saving measures in this generation, including engine cut-off coasting at higher speeds, and a new 48-volt mild hybrid system with a starter generator that takes some load off the diesel engine. 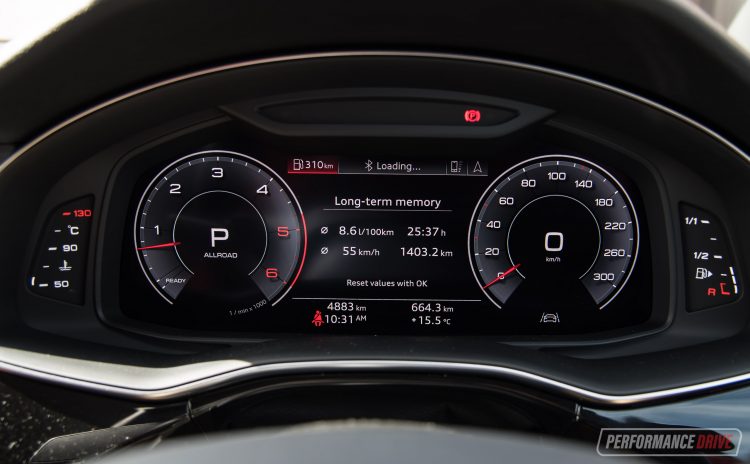 The 2020 Audi Q7 is a bold seven-seater SUV that’s as refined and luxurious as it looks. Our main concerns include the acceleration delay, the sheer weight, and the fact the base model is quite expensive for the class. The towing capacity is definitely a key attraction, and the interior sets a new standard in modern design and technology in our opinion. Passenger space and overall accommodation (with options fitted) also shames many of the class rivals.

CONS:
– Big price for a base model in this class
– Awful delay in initial acceleration (turbo-lag/transmission lag)
– Very heavy (2240kg), and it feels it