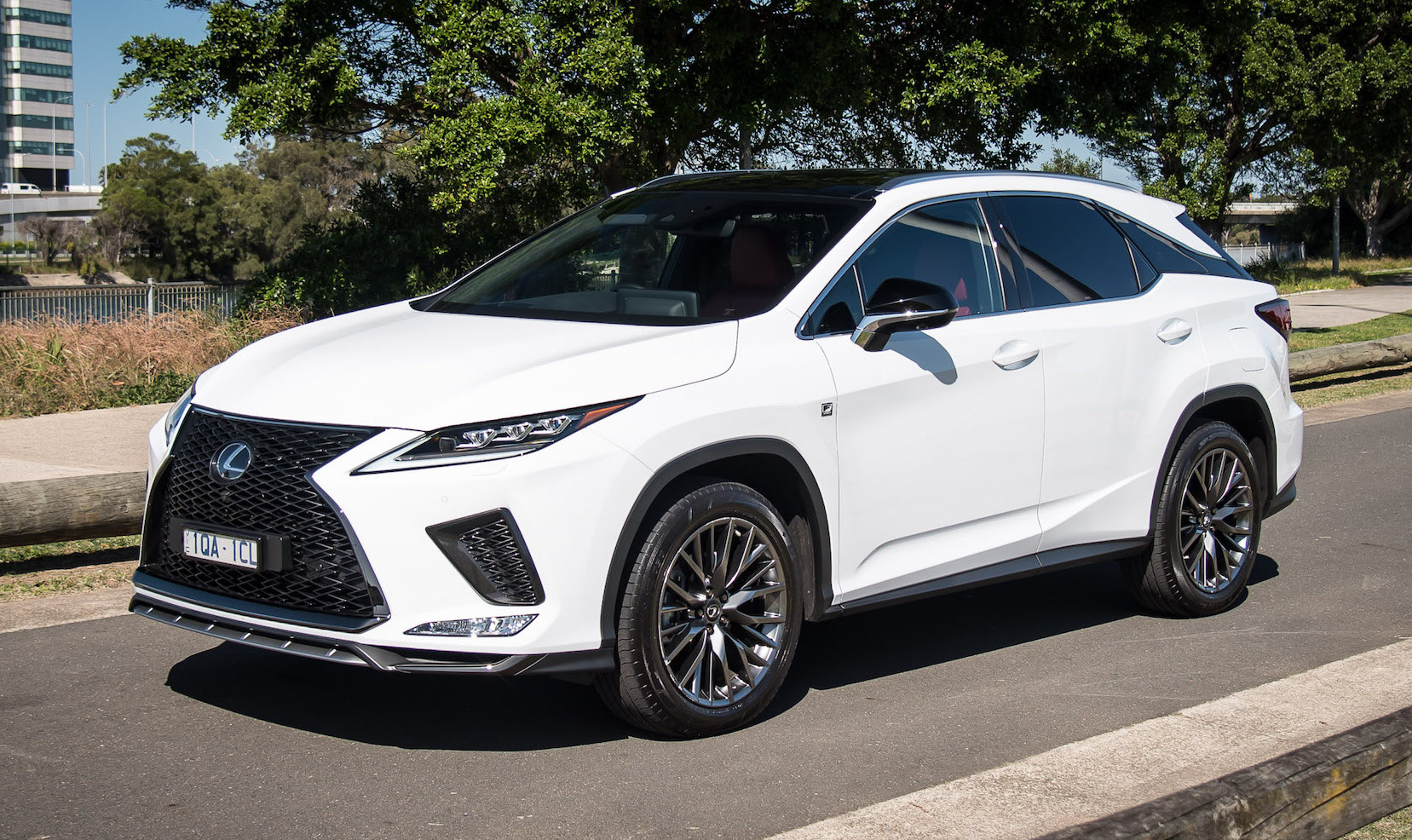 Earlier this year we tested the 2.0L turbo RX 300 from the land of luxury Lexus. But if your tendencies lean more towards meatier, larger capacity engines, the RX range still has something for you; the RX 350. 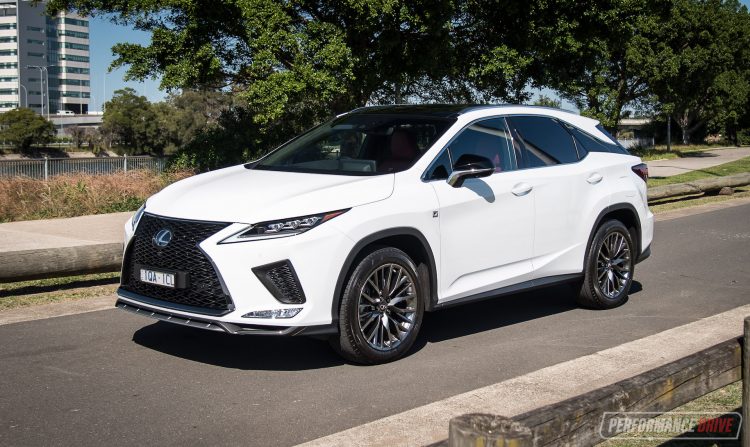 Plotted as the second largest among a wide-ranging line of SUVs from the Japanese Toyota-owned brand, the RX sits under the LX. Now in its fourth generation (although not released in Australia until its second generation), it contests with the likes of the Audi Q7, BMW X5, Mercedes-Benz GLE, and the Volvo XC90.

The 3.5-litre V6 that comes with the RX 350 outputs a healthy 221kW of power and 370Nm of torque, sent to all four wheels via an eight-speed auto gearbox.

If seven seats are a necessity for you, the RX 350 and RX 450h are available with this, and are denoted by adding an L to the name – see our previous RX 350L review here. Curiously, due to the extra room required in the cabin, the exhaust needed to be watered down in the RX 350L, which creates a decreased engine output of 216kW and 358Nm. 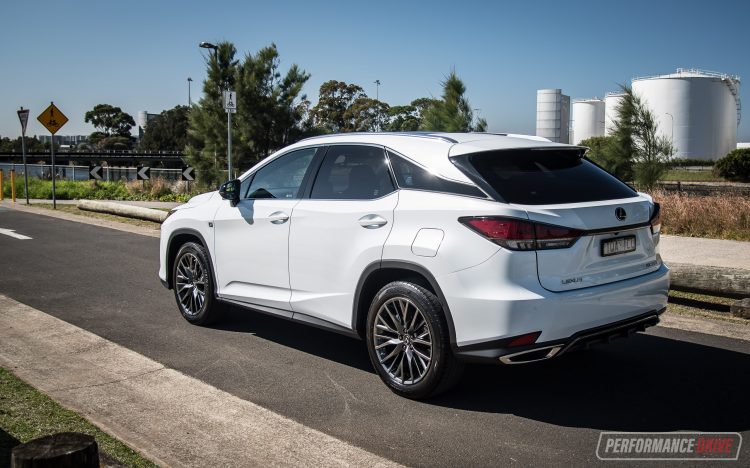 All Lexuses are tremendously easy to identify, with a unique design language that screams sophistication and luxury. The RX 350 is no exception. It is sharp and angular, with an enormous front grille and stunningly crafted LED lights at the front and rear. The boot shape goes with a gentler slant than other SUVs, which gives off a sporty vibe.

When you first open the door, the first thing you notice is a high-quality leather scent. It’s not an inferior, plasticky smell like some cheap brands. Once seated, it’s oh-so-easy to feel at home. There is a myriad of seating positions to adjust, and you can adjust from the centre screen so you’re not overwhelmed with which button moves what. Very smart. Lexus places everything within close reach. The centre console is raised to your elbow level, and more space has been given than earlier models to throw your belongings down. We love how the door pockets now fold out so you can finally fit a bottle in the door. 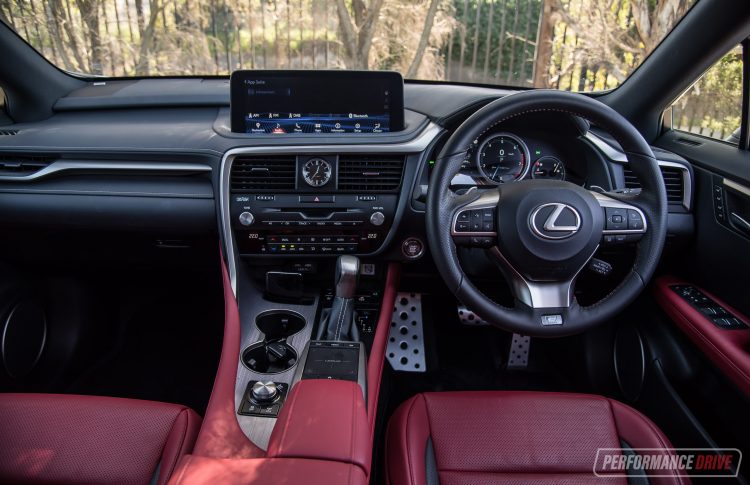 It goes without saying the materials feel the highest levels of quality. Even the detail in knobs and buttons feel first-class. The only areas that are starting to look dated are the silvery-gold plastic bits scattered throughout the cabin.

We love the new 12.3-inch multimedia screen that comes with the MY20 update. It is magnificently clean and bright; and big enough to be spilt into two customisable menus. However, it is controlled by a fiddly vibrating trackpad that guides the cursor over selections in the menu. Even using it solidly for a week, our eyes still needed to come off the road more than other units out there. 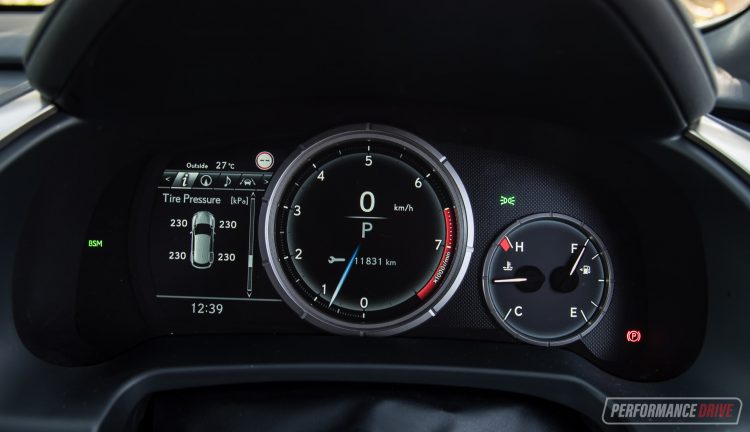 F Sport and Sports Luxury variants introduce a world-first blade-scan LED adaptive high-beam system. Lexus explains that compared with existing technology that points LED lamps towards the road, the new technology directs the lamps towards a blade mirror rotating at 12,000rpm. The blade mirror gives brighter high-beam and expands its reach down the road. It also more precisely controls light distribution down to 0.1-degree increments instead of the previous 1.0-degree increments. This translates to the width of a shaded area being reduced from 6.3 metres to 3.5 metres at a distance of 50 metres. 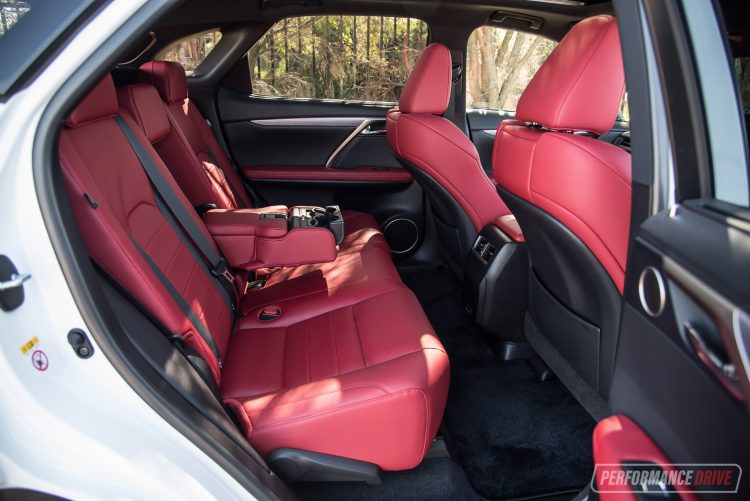 Second row passengers are just as well-accommodated as the front row. There is an enormous amount of legroom, even for taller passengers. There are a couple of USB ports included back there as well, and cup holders and bottles holders for convenience.

Boot space in actual volume seems to fall behind the competition. But we know that some manufacturers use different measuring systems. At 453 litres, this makes it smaller than the Audi Q7 (770 litres), the BMW X5 (650 litres), and the Mercedes- Benz GLE (630L). But we thought there was more than enough space for a family with prams and big shopping trips. You can always lower the second row seat to create 924L of space too.

Lexus offers a four-year/100,000km warranty, which is above most premium offerings. And you can be assured the brand has one of the highest customer satisfaction ratings on the market. Servicing is required every 15,000km or 12 months, whichever comes first. 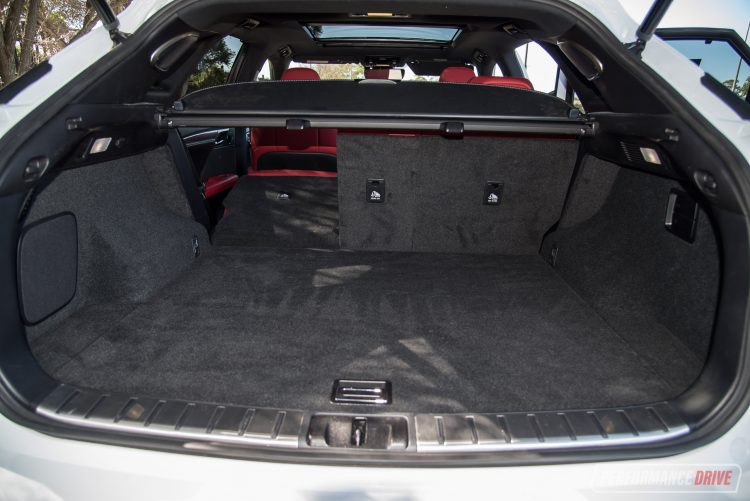 At the risk of denigrating the excellence of the four-cylinder engine in the RX 300, this 3.5-litre V6 feels worlds apart. The 2.0-litre engine deserves large merit for its performance considering the size of the RX and the engine. But the V6 does in its own way too. It acts with an exploding sense of urgency, and it sounds brilliant.

It’s the type of engine that feels at home performing high in the rev range. The second-worst thing about it is because it has the capability to get up to speed so quickly, you don’t get to feel and hear the magic for long, as you’ve already reached the legal speed limit. Officially, the 0-100km/h sprint is timed at 8.0 seconds, which is 1.2 seconds faster than the four-pot engine. Our testing revealed 8.17 seconds – actually 0.1 of a second slower than what we achieved in the (lighter weight) RX 300 Luxury. Hills don’t challenge the engine at all. It just powers up them with no qualms. This is also helped by a responsive and intuitive eight-speed auto gearbox that selects the correct gear quickly. 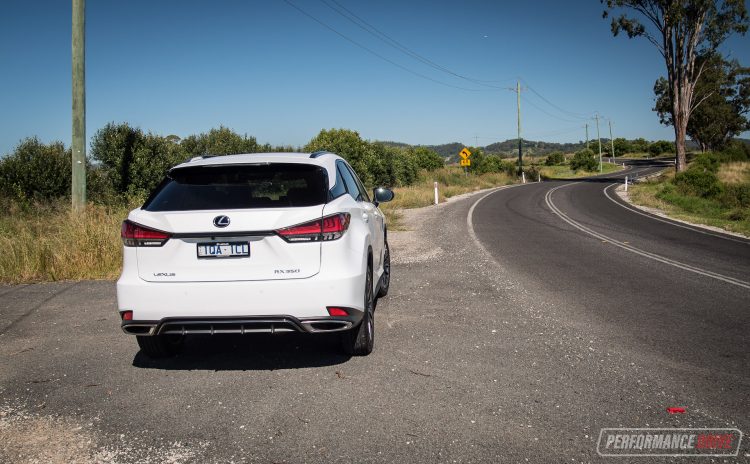 The first-worst thing about the 3.5-litre is the fuel consumption. It is much too high among industry averages, particularly for its performance return. Officially, it uses 9.6L/100km on the combined cycle, but our average did not fall lower than 10.3L/100km – we’ve seen this sort of real-world average from modern V8s. Maybe it’s a sneaky way to lure you into the hybrid range?

As we found in the RX 300, the RX 350 also has a poor braked towing capacity of 1500kg. In comparison, there are smaller SUVs in the mid-sized market that are rated at more than 2000kg. For example, the Volvo XC40 is rated at 2100kg. It’s a shame that many grey nomads won’t be able to opt for something as comfortable as an RX 350, as it is perfectly suited to long haul travels. Now, obviously not all luxury car buyers put towing capacity at the top of their priorities, but it’d be nice to see Lexus at least near the key petrol rivals; Audi Q7 50 TDI [no petrol available] (3500kg), BMW X5 40i (2700kg), Mercedes-Benz GLE 450 (2700kg). 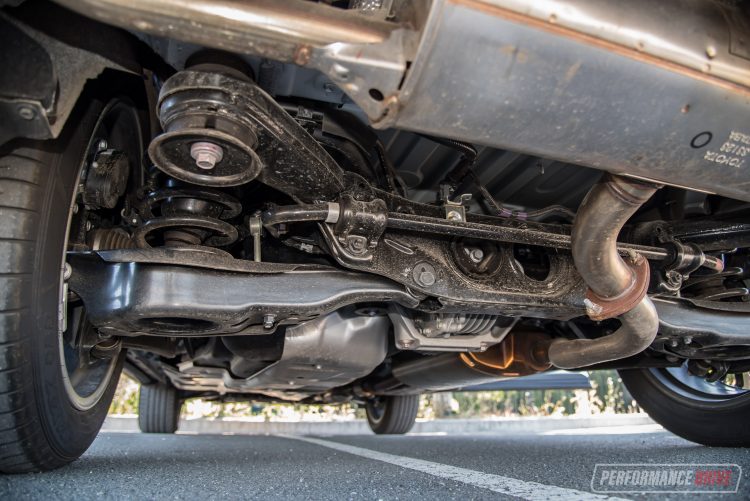 If you wish to take your RX 350 off road, you can do that to a small extent thanks to the on-demand all-wheel drive system. The 235/55 tyres also provide some given, but the sharp and low body will limit you to mild grass/dirt roads and rough gravel. Ground clearance is stamped at 189mm.

On the road, the F Sport steps up the suspension from the base model with adaptive variable dampers and front and rear performance braces. All 2020 models also receive tweaks in this department. New hub bearings are introduced to help increase lateral rigidity, a thicker rear stabiliser bar is installed and now hollow to weight, while active cornering assist (brake-style torque vectoring) is now included on all models. Some tweaks have also been made to the electronic power steering for a tighter on-centre feel.

In the RX 350 F Sport, the ride experience is immaculately smooth and quiet, even over bigger bumps and potholes. It glides over road imperfections, which is not something that can be said of some of the Euro rivals. Thanks to that variable suspension, body roll is kept to a minimum when encountering spirited roads. It’s not the sharpest handling SUV in the class, but it is best fit-for-purpose for this style of vehicle in our opinion. The steering is also light, which means diminutive effort is required through tight and slow operations.

The RX3 50 F Sport is a great demonstration of top-shelf luxury and refinement from Lexus. It looks brilliant, and attention to detail has most rivals shaking in their boots. However, the elephant in the room for us is the high fuel consumption and poor towing capacity.

If you don’t care about those things, you’ll enjoy a kicker V6 that bursts with urgency and sounds remarkable. You’ll also love the quietness of a luxurious interior, and well-performing adaptive suspension that offers the best of both worlds; nice handling and blissful comfort.

CONS:
– Fuel consumption
– Vibrating trackpad is not the most intuitive to use
– Boot space is at the smaller side of the class, so is the towing capacity