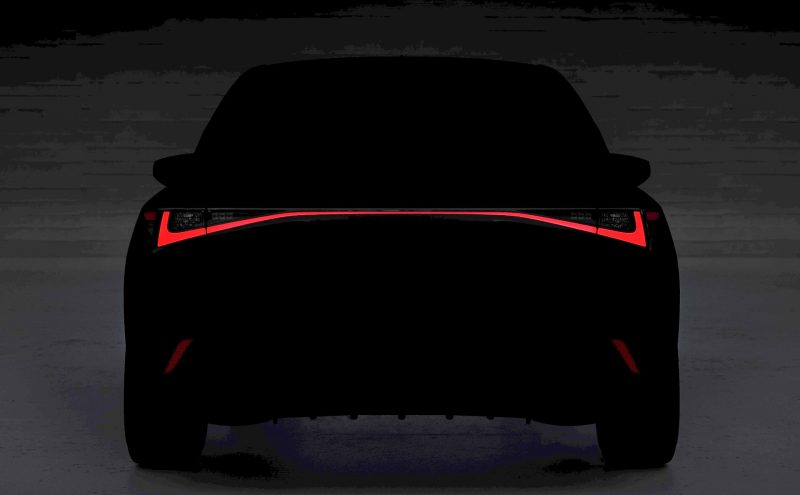 In surprise news today Lexus has confirmed it will be unveiling the new 2021 Lexus IS sedan next week. The company has even supplied a preview image to stir some excitement. While there has been plenty of rumours circulating over the past 12 months or so that suggest a new Lexus IS could revive the IS F badge, while other rumours reckon the company’s new ‘V35A-FTS’ 3.5-litre twin-turbo V6 – found in the 310kW/600Nm Lexus LS 500 – will be introduced as a new range-topper, Lexus hasn’t actually provided any concrete information. We certainly weren’t expecting a debut so soon.

Lexus will unveil the new mid-size premium sports sedan via an online world premiere event on June 10, at 9am Australian Eastern Standard Time. The company says the virtual reveal program will include new model information, images and video footage. Lexus handed out a statement today, but it doesn’t contain any juicy info. It says:

“Lexus plans to hold the world premiere of the new mid-sized rear-wheel drive Lexus IS sports sedan online at 9:00am AEST on Wednesday June 10. Ahead of this digital world premiere, please enjoy a preview image of the new Lexus IS.”

Only this single teaser image accompanies the debut confirmation. We have modified the image in Photoshop, mainly turning up the exposure levels, but it doesn’t provide much in terms of the full panel design and finer details. However, and rather obviously, the image does confirm the 2021 Lexus IS sedan will feature a full-width taillight arrangement. The taillight design actually looks pretty similar to the theme applied to the Lexus UX small SUV, which is one of newest Lexus models in the showroom. You can also see the wide and high rear guards, perhaps providing a more dominant stance than the current layout (above). And there appears to be an outline of a finned diffuser at the bottom.

We heard rumours just a couple of weeks ago that Lexus was apparently planning a V8 version of a “facelifted” IS sedan, which was set to be a last hurrah for the company’s 5.0-litre naturally-aspirated V8. The rumour suggested this would only be a facelift before an all-new model arrives in years to come.

Well, we don’t know what to expect here. This teaser does seem like the car is quite different to the current, third-generation model. We guess we only have to wait until next Wednesday for all the details… unless there’s a leak in the meantime. Stay tuned.