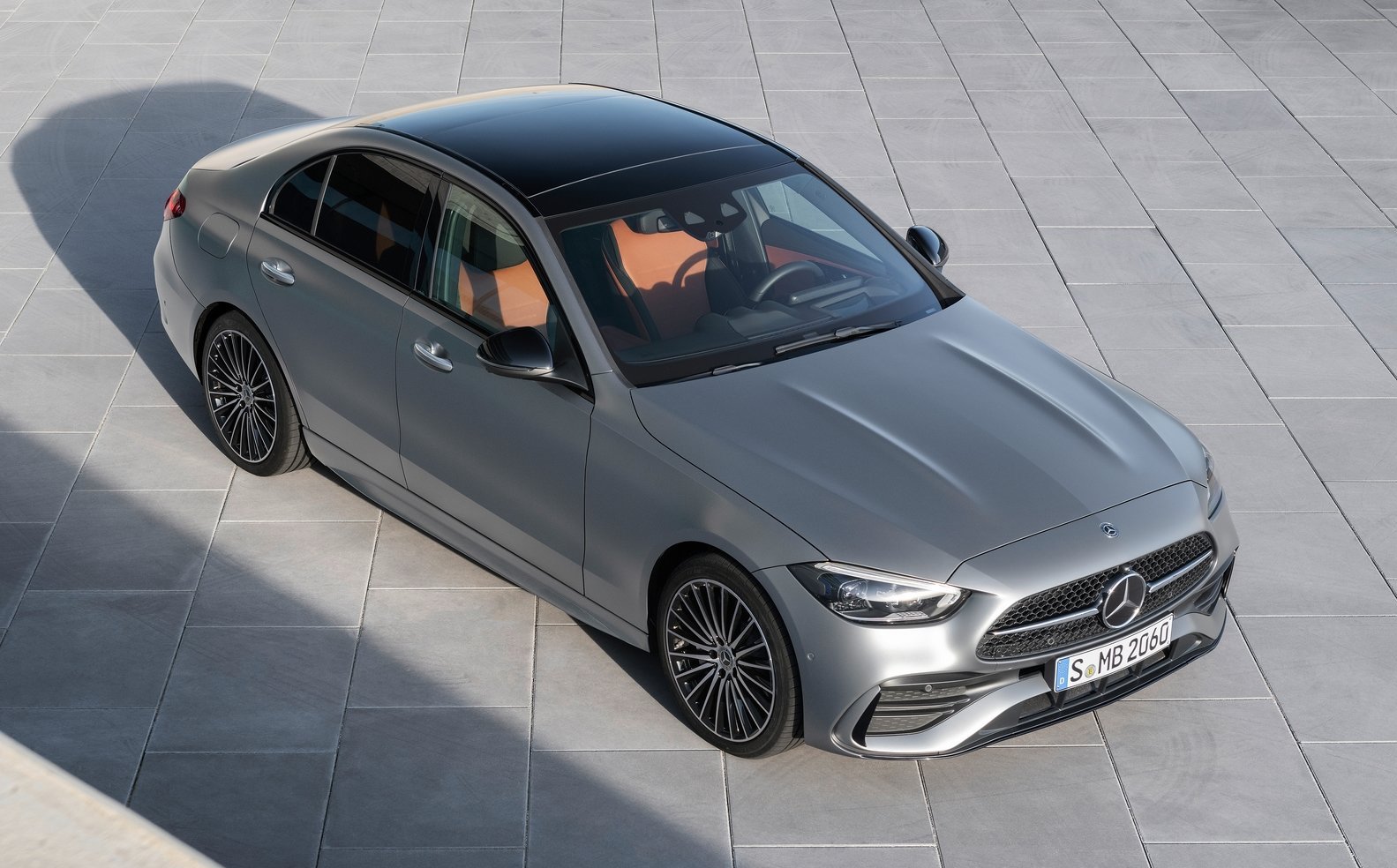 Here it is, folks. The brand-new, W206 2022 Mercedes-Benz C-Class. It has just made its debut online in sedan and Estate wagon form, boasting a number of segment firsts, a complete electrified range with only four-cylinder engines, and of course fresh styling inside and out. 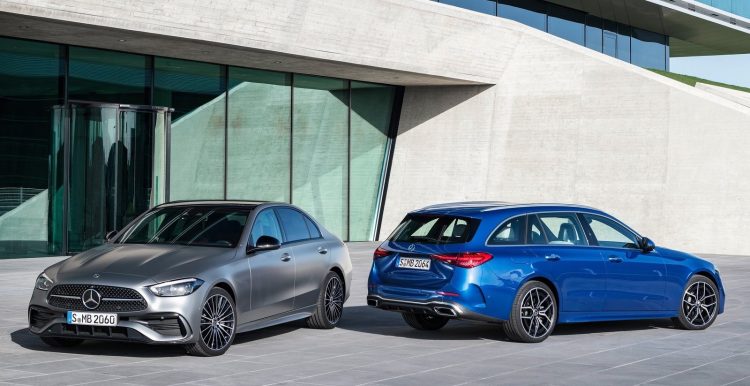 The new model takes its design inspiration from the latest Mercedes-Benz crop, especially the new S-Class. It’s more rounded and smoother, with beady headlights and flush taillights. From a distance, it looks a bit like the current CLA-Class, although it is obviously more upright than the lower-profile four-door coupe.

Like many new models coming out these days, the W206 C-Class is larger than the predecessor. Specifically, it (in sedan form) measures 4751mm in length, 1820mm in width, and stands 1438mm tall. That makes it 65mm longer and 10mm wider, while standing 9mm shorter than the outgoing model. The wheelbase also incorporates an extra 25mm, and the track widths are 19mm and 48mm wider, front and rear. 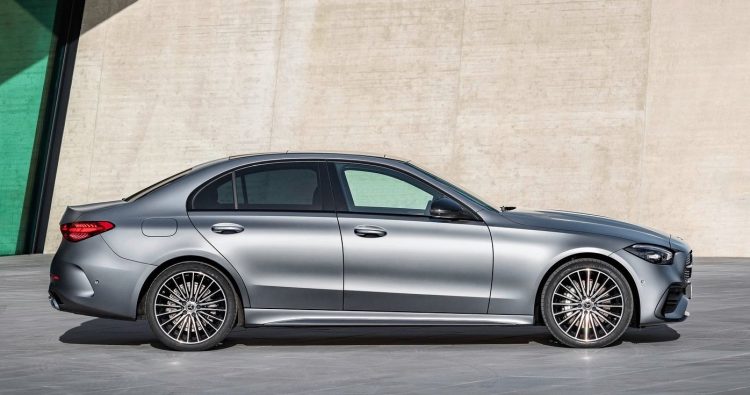 As a result of the increased dimensions, the W206 C-Class offers more passenger space. Mercedes says there is an additional 2mm of headroom in the front, an extra 21mm of legroom in the back, and more elbow and shoulder space in the front and back. Boot volume in the sedan remains unchanged at 455L, but the Estate gets an extra 30L, offering 460L or 1480L with the rear seats folded.

Speaking of the interior, passengers are treated to the second-generation MBUX user interface which debuted on the new S-Class. It includes twin LCD screens which can be configured in Discreet, Sporty, and Classic themes. The media screen measures 9.5 inches or there’s an optional 11.9-inch unit, while the instrument cluster screen can be had in 10.25-inch or 12.3-inch size. 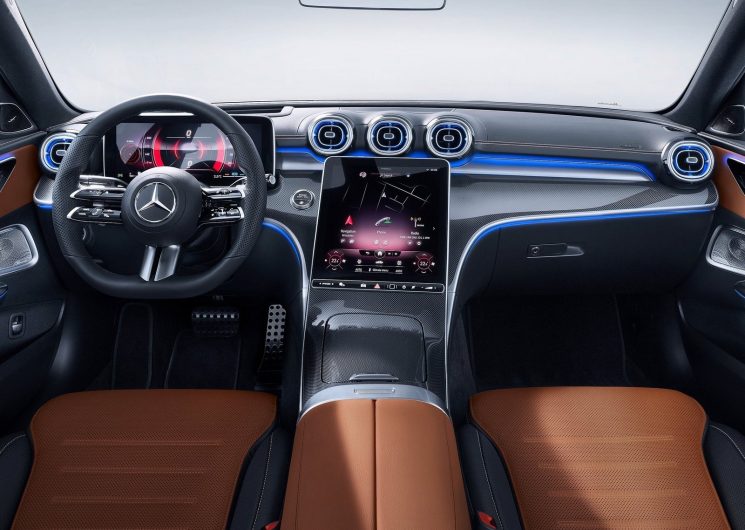 Some of the segment firsts include an optional Augmented Video system, which uses an external camera to monitor surroundings and superimpose virtual objects and information. There’s also a finger-print scanner available for logging into the MBUX system, and there’s even rear-wheel steering available.

Under the bonnet, the 2022 C-Class will be available with four-cylinder engines only. The lineup (market region availability may differ) consists of the C 180, C 200, and C 300 for the petrol, and the C 220d and C 300d for the diesel. For the first time, the latter showcases the first starter-generator mild-hybrid setup for a diesel. See below for the full specs on these engines. 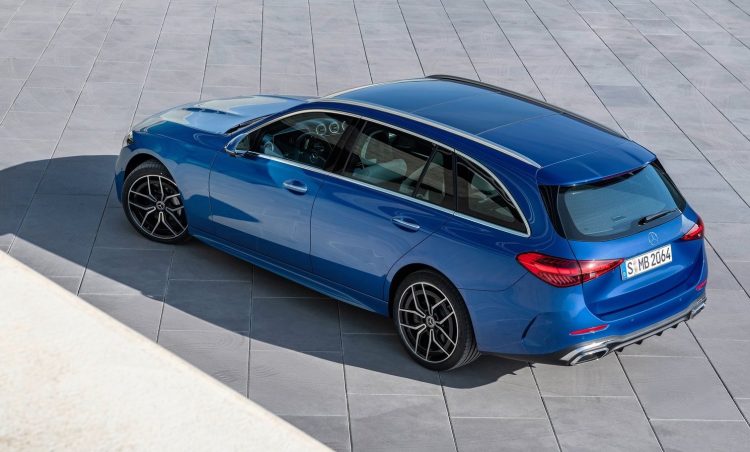 Mercedes-Benz says it will be launching fourth-generation plug-in hybrid models after the initial introduction, offering around 100km of electric driving range. Meanwhile details on the AMG performance models are yet to be confirmed. Speaking about the new model, Ola Källenius, CEO of Daimler AG and Mercedes-Benz AG, said:

“The letters C and S sit at opposite ends of the alphabet. However, in our portfolio they’re now moving closer together. The C-Class is already our best-selling saloon. Still, I’m certain our new C-Class will excite even more customers with a wide range of high-tech features derived from our flagship S-Class. With the latest generation MBUX, rear-axle steering and comprehensive electrification, our most successful model range will once again raise the bar as the most sophisticated offering in its segment.”

Mercedes-Benz Australia is yet to officially confirm any local specs or market entry timing, however, it is expected to arrive here later this year.

Consumption values according to WLTP:

Consumption values according to WLTP: