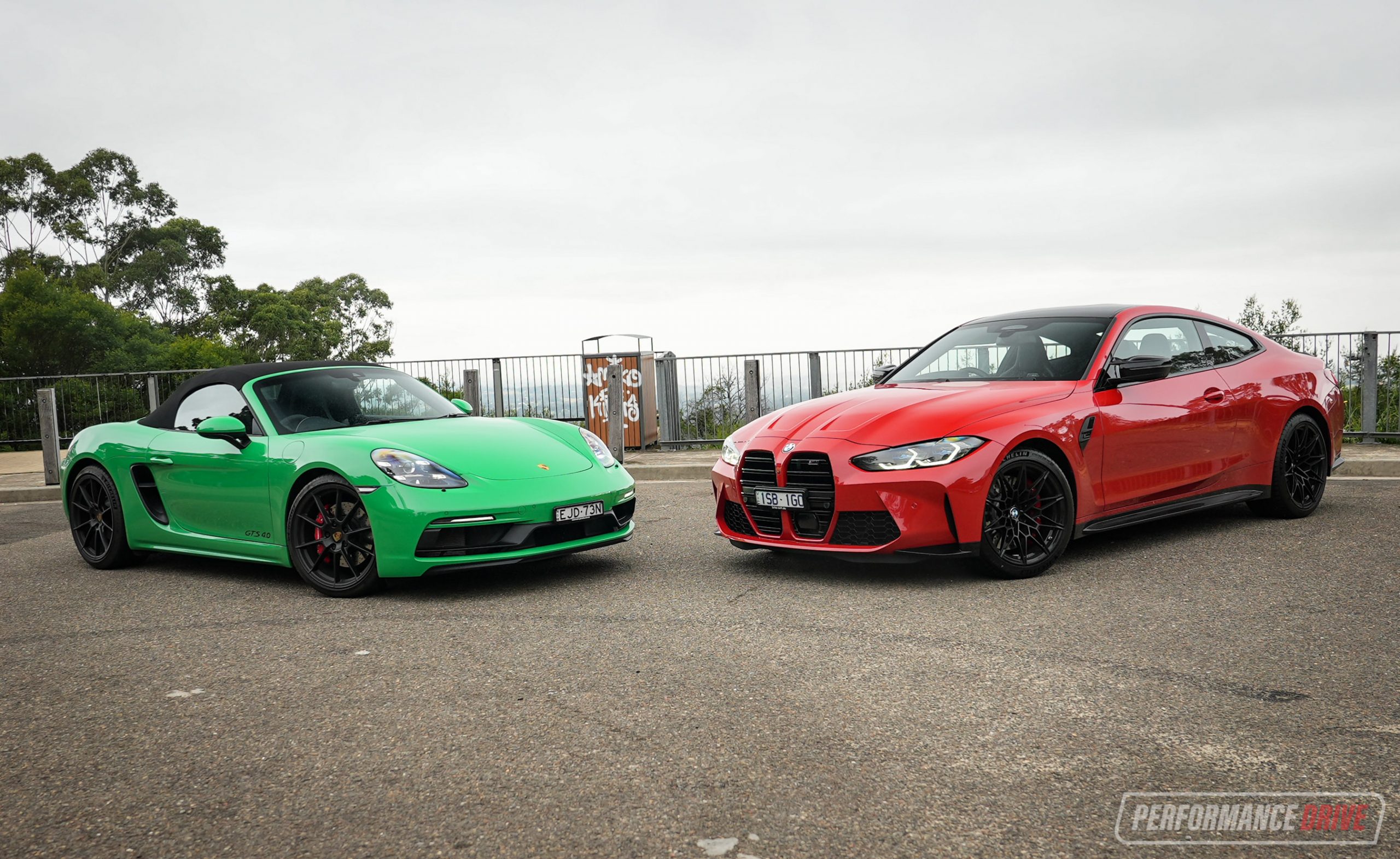 If you’re in the market for a proper driver’s car that is just at home on the track as it is on a mountain pass, or in the daily grind, and you have around $170k to spend, these two are pretty much the pinnacle of what’s currently available. 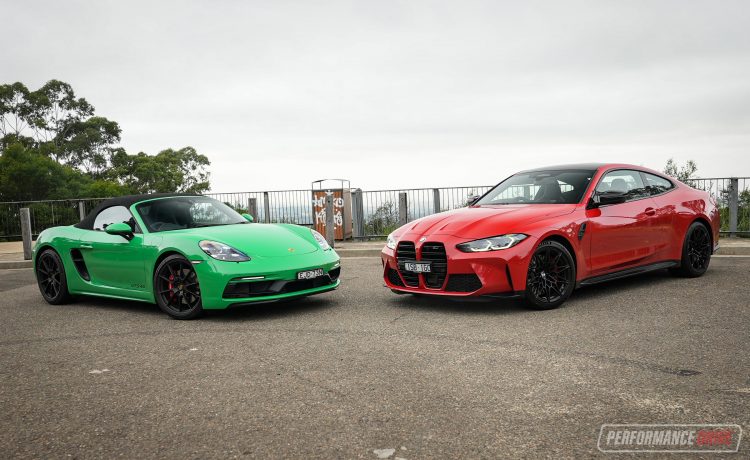 According to the Federal Chamber of Automotive Industries in Australia, the BMW M4 and the Porsche 718 Boxster GTS compete in the same segment. That is, the $80,000-$200,000 sports car class. They’re both rear-wheel drive, both available with a manual transmission, and both powered by an illustrious, extensively-evolved six-cylinder engine.

Here we’re sampling BMW’s new M4 Competition with the eight-speed automatic transmission (no manual option for the Competition), and pitching it against the 718 Boxster GTS with the six-speed manual. On paper, the BMW offers a claimed 0-100km/h time of 3.9 seconds and the Porsche with the PDK auto does it in 4.0 seconds (claimed 4.5 with the manual). Prices start from $159,900 and $178,900, respectively (excluding on-roads).

Yes, in an ideal scenario we should be comparing the Cayman with the M4 coupe. The Cayman GTS 4.0 is almost identical to the Boxster GTS 4.0, just with a fixed coupe roof as opposed to the Boxster’s folding soft-top. In that sense you could apply and interchange much of the comparison material here for the Cayman. Likewise, the new BMW M4 convertible is arriving later this year so you can consider that as a similar proposition as well.

Interestingly, the Cayman GTS 4.0 manual is only a tad cheaper than the Boxster version, starting from $175,200. Prices for the M4 Competition convertible have been confirmed to start from $176,900. So, really, these two are extremely close. 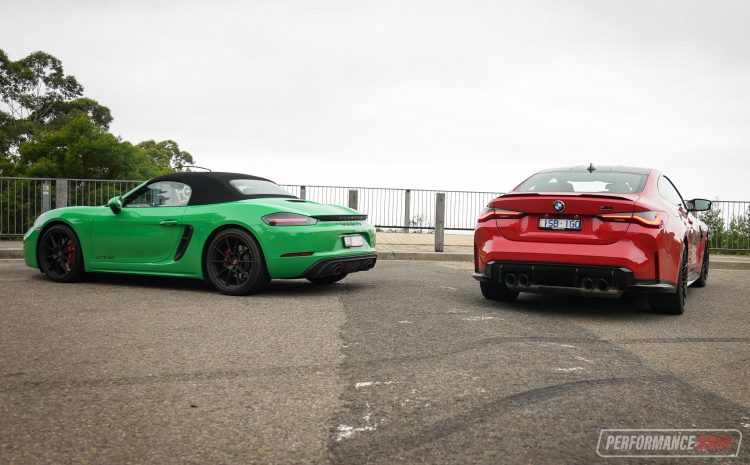 Now obviously the M4 offers more interior space and is thus the more practical option of the two. Its 440-litre boot is also larger than the Boxster’s front (170L) and rear (120L) boots combined. The M4 has two, reasonably useable seats in the back while the Porsche is a strict two-seater.

However, if you’re considering buying something like these two then chances are, practicality is not going to be at the peak of your priorities. What’s probably more important is the way they make you feel and how accommodating they are to the driver. 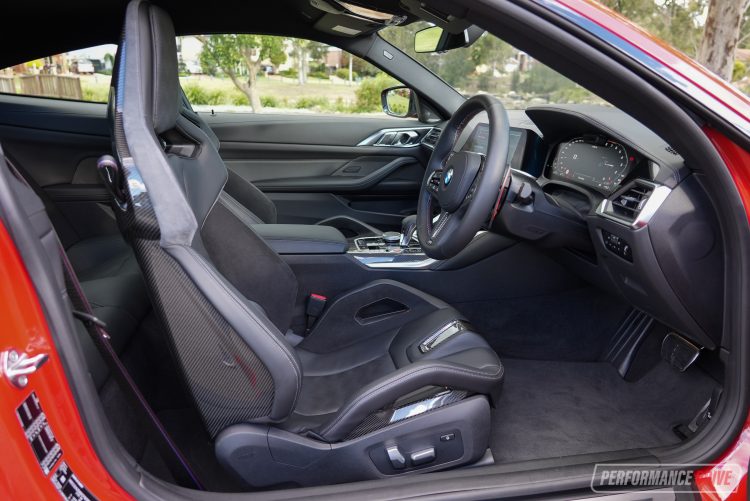 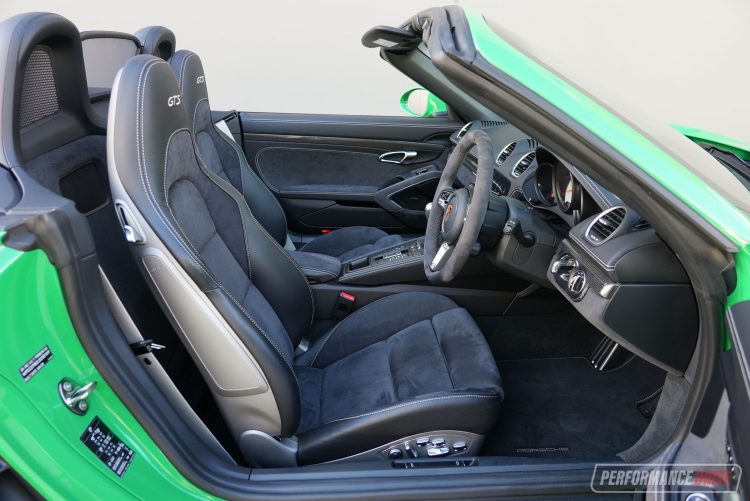 The driving position in the Porsche stands ahead in our opinion. The no-fuss dash and centre console allows you to get comfortable with little distraction. Visibility is also better thanks to its well-forward dash and clearer views around the A-pillars.

We also love the Alcantara-wrapped steering wheel and the enticing drive mode dial on one of the spokes. The atmosphere feels club sport rather than showy and luxurious. So if driving is of utmost importance, we award the Boxster’s interior design, decor, and layout as the best fit. 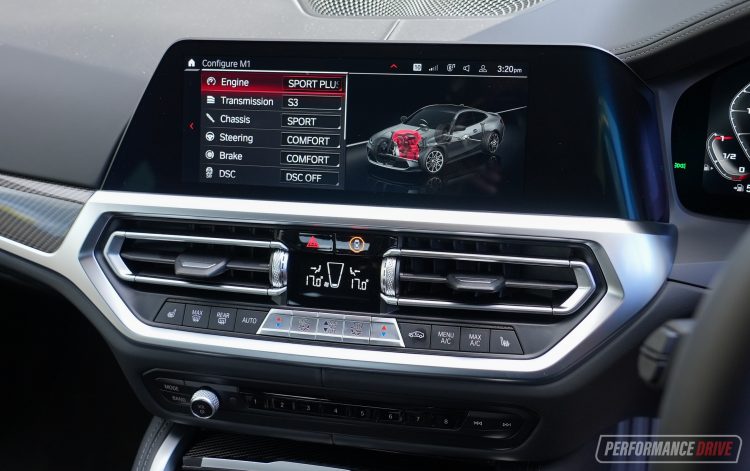 Over in the M4. This is pretty much just another modern BMW. You get the same iDrive controller for the multimedia interface as other models. The centre console and door trims essentially carry over from the 3 and 4 Series. And the fully digital instrument cluster, while more advanced than the Porsche’s mechanical dials, lacks character and distinction (aside from M4 insignia).

Fortunately though, this is all positive stuff. The 10.25-inch media screen is far superior to Porsche’s 7.0-inch unit in terms of graphical themes and menu functionality and depth, while the carry-over fixtures mean you have plenty of space for your things, including proper cup holders (not just flip-out items from the dash), big door pockets and bottle holders, and a decent centre console box. 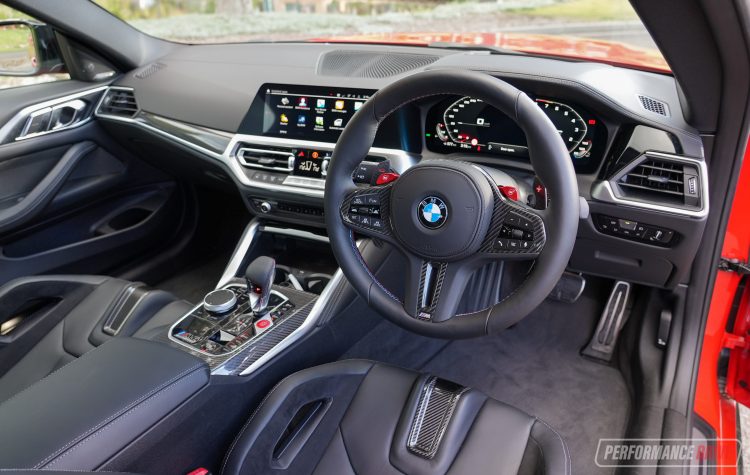 Although we don’t fancy the digital cluster and gauges, being digital means you can play around with different display layouts and different content. This expands the overall versatility of the car we think, and we guess that means it has a greater potential to suit a greater range of individuals and their tastes, because it is more adaptable.

Overall, the M4 is obviously the choice if you need boot space and the ability to carry more than two people. The in-car technology is also superior. However, for a pure driver’s cockpit, the Porsche does better at letting you get on with what you want to do; drive. It also looks and feels special, and thus gets closer to fulfilling its price tag. Of course, there’s also the added bonus of being able to fold down the roof in the Boxster, providing another dimension of fun. 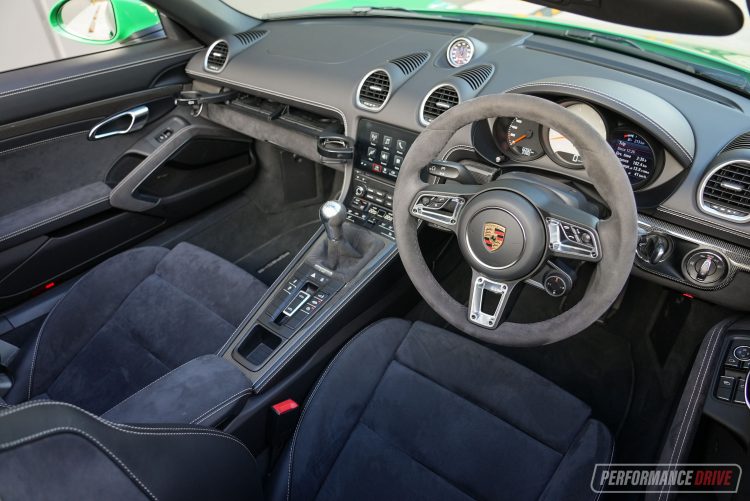 The M4 features a front-mounted 3.0-litre twin-turbo inline-six. This is BMW M’s new S58 engine – also found in the new M3 – which is an evolution of the previous S55 unit. Peak power is reached at 6250rpm, where you’ll be hit by 375kW, while 650Nm of torque is stretched between just 2750rpm and 5500rpm. For sheer versatility and breadth, this is the pick.

Over in the Porsche is a 4.0-litre naturally aspirated flat-six. It develops 294kW at 7000rpm, and 420Nm between a narrower 5000-6500rpm. Without forced induction this engine doesn’t look as good on paper. Fortunately, the Boxster has weight on its side. Or lack of. The BMW’s total weight is 1688kg while the Porsche weighs 1366kg (both tare). With just 1366kg to haul around the Porsche feels like it generates around 500-550Nm;  each gear is pulled swiftly up to speed with no lag and certainly no flat spots. 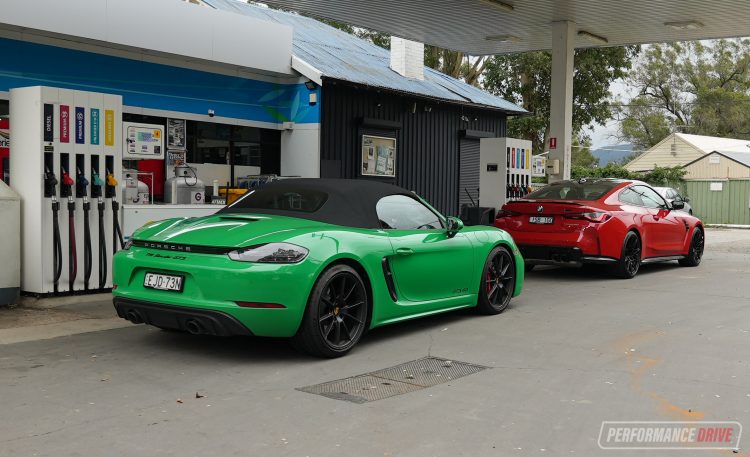 Obviously emissions regulations are making it very difficult for sports cars to sound as good as they could. And both of these cars are clogged up with such measures. As such, the M4’s inline-six offers a respectable fuel consumption average of 10.2L/100km, with an emissions average of 234g/km, and it passes Euro 6 standards. We averaged 12.2L/100km in a mix of highway touring, performance testing, and running about in typical urban conditions with traffic and so on.

Over in the Porsche, its 4.0L flat-six offers an average consumption of 11L/100km, an average emissions output of 250g/km, and it only meets Euro 5 standards. This is probably understandable as the engine isn’t supported by turbochargers or a supercharger. Technically, it is a modern engine though, based on the 4.0L unit that was created for the Cayman GT4 and Spyder. That engine (tuned to 309kW) is derived from the 911’s latest 3.0-litre twin-turbo flat-six. We averaged 11.7L/100km during our test, in similar conditions as the M4. 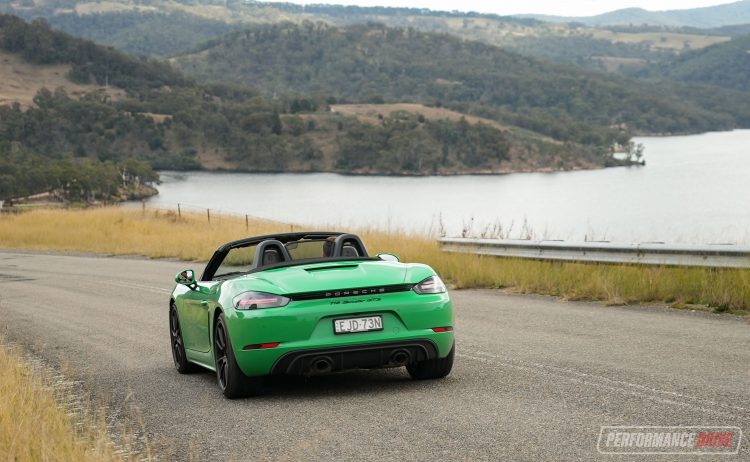 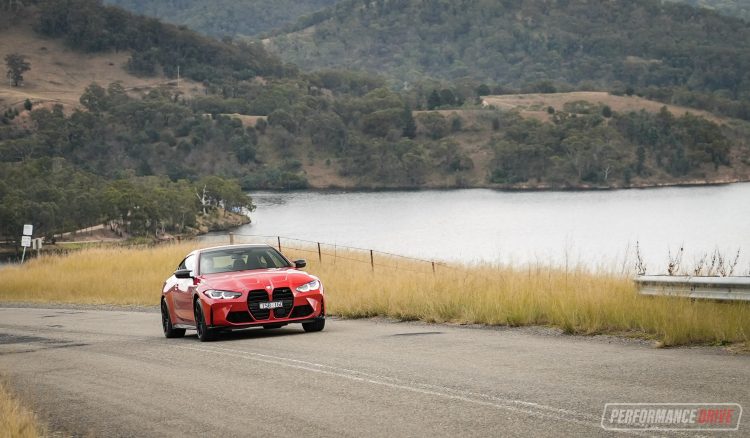 They don’t sound all that fantastic. Animated and energetic, yes, but not as seductive as their predecessors in our opinion. Of the two though the Porsche wins in this department. There’s entertainment to be had listening to the entire rev journey, from just off idle, all the way up to 7000rpm and beyond. Meanwhile the M4 has a few tasty bits in its rev range, but it doesn’t build a story quite like the Porsche.

We think engine/exhaust sound is paramount in sports cars. It’s another sense that’s tingled, helping to ensure each journey is memorable and entertaining. What can help is the engine’s performance. And between these two, the M4’s new S58 eats the Porsche’s engine for breakfast. Even discounting the fact we are comparing an auto with a manual here, the sheer relentless speed of the M4 is astonishing. It just never lets up. In fact, on a private road with a Vbox we saw 0-100km/h come up in 3.93 seconds and 0-200km/h done and dusted in just 11.74 seconds. Seriously, it’s like driving a very fast car down a very steep hill.

The Porsche isn’t slow at all. It simply trails behind the M4 in this case. It’d be interesting to see what the PDK auto could manage – Porsche claims 0-100km/h is done in just 4.0 seconds. In this manual example the best 0-100km/h we could find was 4.59 seconds, with 0-200km/h clocked in 14.27 seconds. Whereas the BMW is scary fast, undertaking full-throttle acceleration runs in the Porsche is such a joy. Listening to the wailing flat-six, shifting through the slick gearbox, and experiencing complete stability and focus is truly something else. 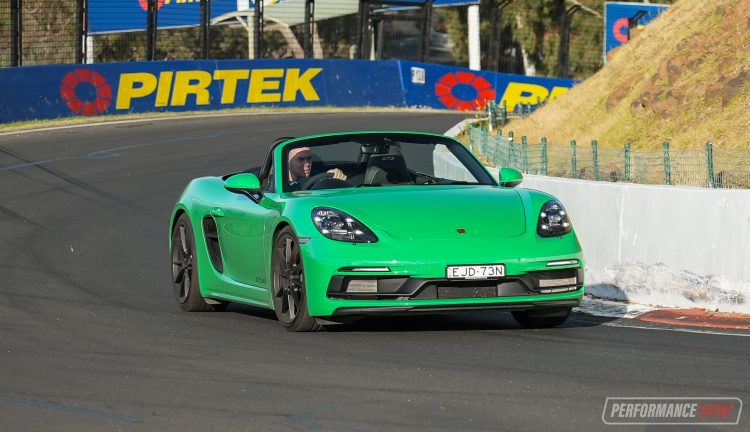 A similar thing could be said about the handling of these two. The BMW is a lot more controlled and well behaved compared with the old model, but it can’t match the mid-engine Porsche for outright balance. The Boxster turns in beautifully and feels so light and natural throughout the arc of a bend, whereas the BMW can seem heavy and a little bit distant through its electric steering, in comparison. The Beemer does feel very solid though, and surprisingly planted, even under full power and all of that torque.

When it comes to powersliding escapades, the M4 is an absolute menace. It loves to hang its tail out in long, smoke-pluming drifts, and always feels controlled and stable doing so. It is very clear that engineers have spent considerable effort playing around with drift angles and ensuring it can undertake such exercises with precision, as well as maximum excitement and fun. 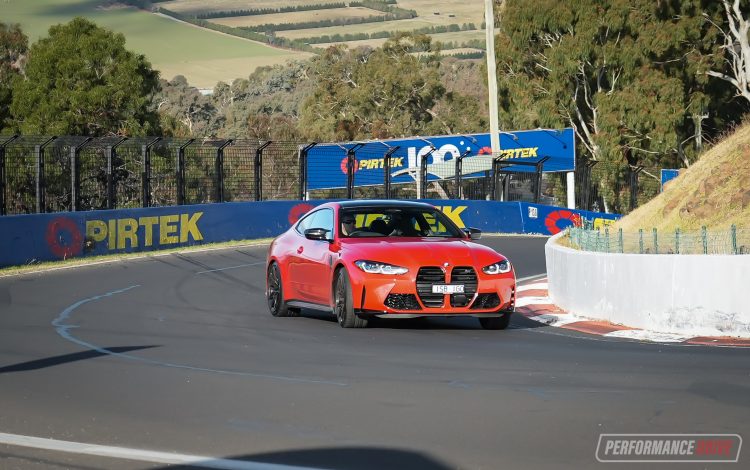 In the Porsche, this is a much more refined and civilised sports car and so it prefers not to engage in such antics. That’s not to say it can’t. You just have to try harder and really let it know that’s what you want to do. Instead, the copious amounts of rear-end traction and cornering grip means it is extremely competent thrashing along a bendy country road – and even more surreal with the roof down. Making minor turns or simply going around roundabouts, the Porsche is just lovely to drive. The M4 is more of a beast.

As for braking performance, both cars offer exceptional stopping power. They both seem to resist fade in equal measures, and the pedal always feels good. There is ample communication through the brake pedal as well. Across our usual timed runs from 100-0km/h, the Porsche stopped the clock 34.14 metres and the M4 took 35.90 metres. 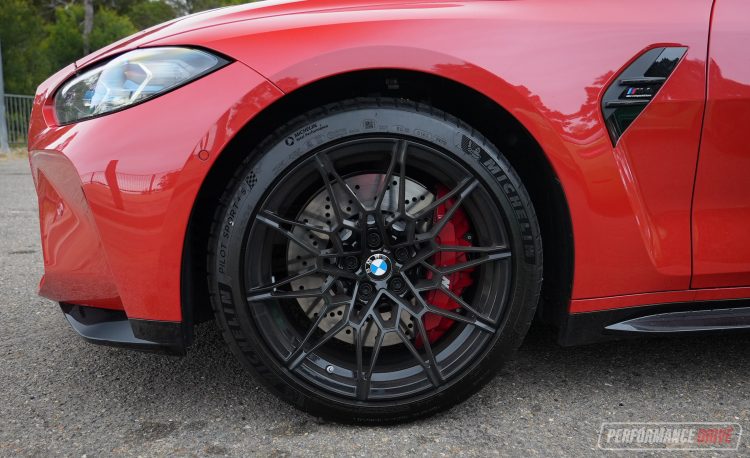 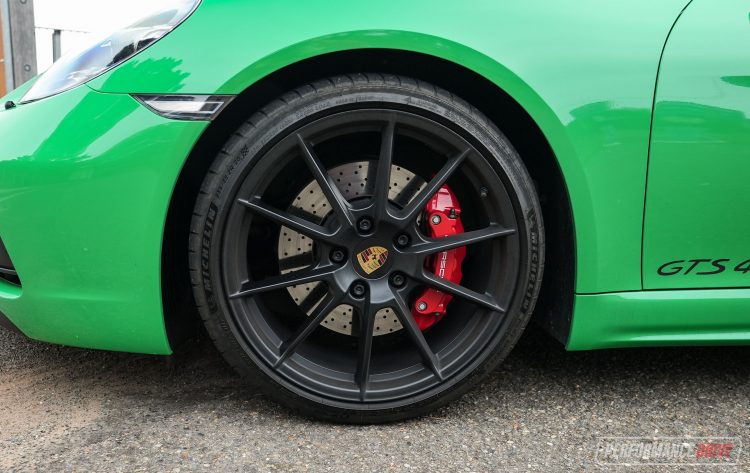 We absolutely adore the 718 GTS 4.0 on a spirited road. Its glorious flat-six engine, revving past 7000rpm, and its superior steering and precise yet playful handling all come together in perfect harmony. All of the controls are clearly more finely tuned to the art of driving than those in the BMW; it’s hands-on, raw and mechanical as opposed to digital, somewhat distant, and a bit artificial. The ride is also significantly more comfortable than the Beemer.

However, because we’re still a bit immature and enjoy taming wild rides, big g-force and powersliding and all of that, we’ll take the BMW. At least until we eventually grow up.