If you’re in the market for a thoroughbred track car that’s road legal, Porsche is usually a great place to start. And at the entry end of its motorsport-ready GT range is the 2020 Porsche 718 Cayman GT4. Think of it as like a mini 911 GT3. 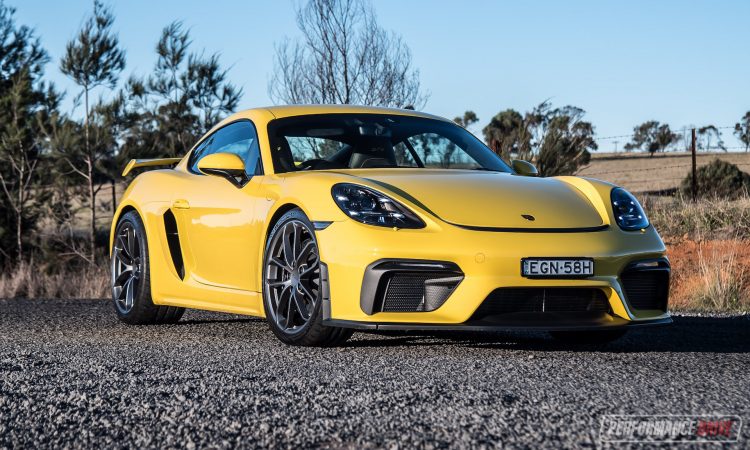 You can get in roadster form, called the 718 Spyder, or coupe form, called the 718 Cayman GT4. Both feature a new high-revving 4.0-litre naturally aspirated flat-six engine not too dissimilar to the flat-six family that power the 911 range. It’s a more advanced and more powerful unit than the 3.8L predecessor, developing an impressive 309kW at 7600rpm. Torque remains unchanged at 420Nm. 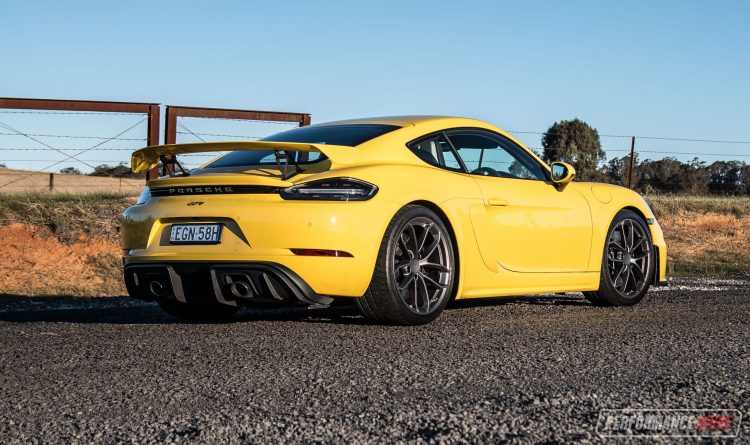 You wouldn’t be criticised for thinking this is an actual racing car. After all, the exterior showcases just as many spoilers and extravagant wings and scoops as one. Compared with the regular 718 Cayman you have a completely bespoke front bumper bar and air intake system, big ducts to cool the brakes, and a spade-like chin splitter to shovel up as much air as it can before it escapes under the car.

Around at the back you’ll find a very obvious wing. This is a fixed item featuring special side winglets that help aid high-speed stability, like what you might find on an aeroplane. Underneath that, below a discreet lip spoiler/nolder, is a chunky diffuser element that houses a huge venturi-like central tunnel. This area alone helps generate 30 per cent of the rear end downforce. Overall, the 718 Cayman GT4 can generate 50 per cent more downforce than the predecessor. 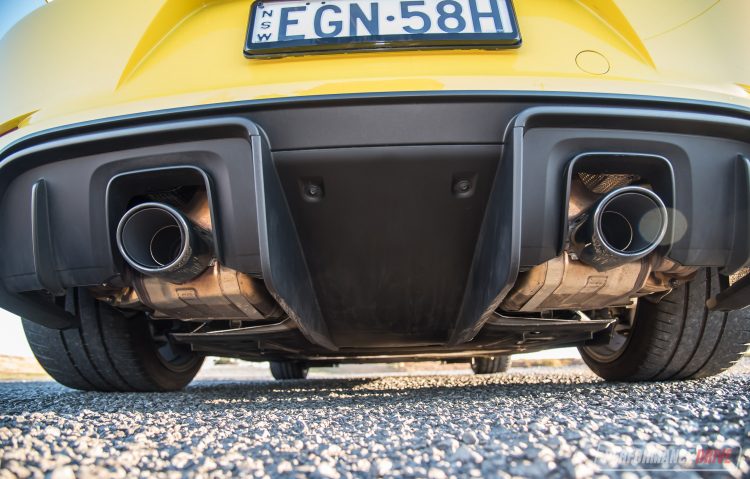 As for interior, well, it’s surprisingly accommodating. It can be, anyway. Porsche gives buyers the opportunity to configure the cabin into an environment that best suits their needs. For example, this test vehicle features the adaptive sports seat package which includes perfectly regular and comfortable sports seats with power adjustment.

However, if you are intending to hit the track more frequently you can stick with the standard bucket seats. There’s also Clubsport package which adds in a half roll cage, six-point harness for the driver, and a fire extinguisher for an additional $8250. Or you can even add full racing bucket seats for an extra $11,250. 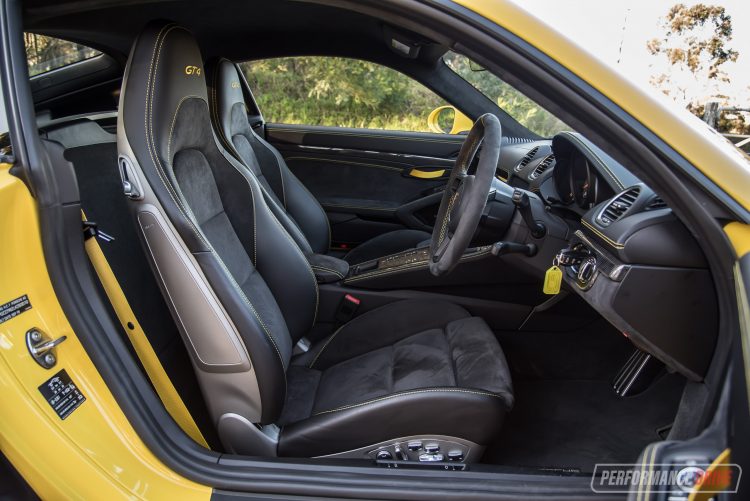 We like the configuration of this vehicle. The seats are supportive enough for spirited driving and will probably suffice for leisure club events and the odd drive day at the track, but they are also comfy for long journeys. You could use the GT4 for a weekend escape in that sense, especially with its dual cargo areas opening up a combined 420 litres of storage for your luggage.

There’s a crisp touch-screen media interface on the dash as well, complete with sat-nav, digital radio, and Apple CarPlay connectivity, and even an eight-speaker sound system as standard. This car shows off the 14-speaker Bose surround sound option, which is superb and a reasonable $2470 extra. Dual-zone climate control is also standard, as are heated front seats, cruise control, and a rear-view camera. 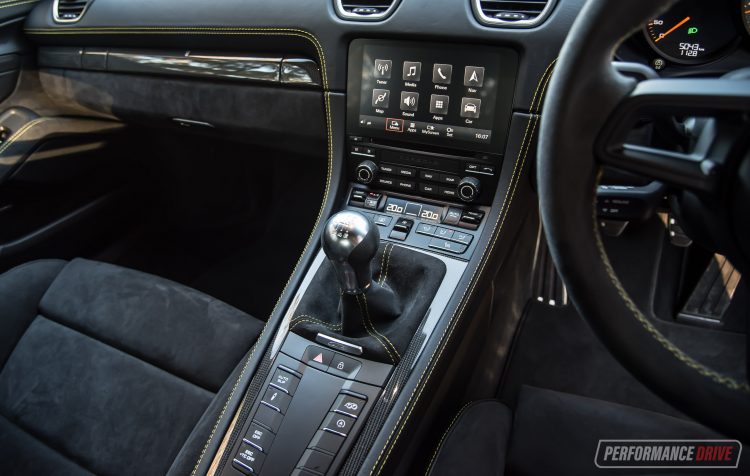 Most of the in-car entertainment is provided simply by the Cayman’s clean and driver-focused atmosphere. There isn’t much storage around the place, but the driving position is absolutely spot on, and you get Porsche’s well-forward and flat dash facilitating a clear and open view ahead. All you need to do is glance at those famously curvaceous wheel arches protruding up and you’ll quickly realise this is a machine for driving. And that’s the most exciting part.

Starting up the flat-six engine isn’t as glamorous as, say, starting a Ferrari or Lamborghini. There’s actually a bit of clatter and roughness, even idling at a high-tempo burble that’s sometimes interrupted by a random cough or splutter. This is race car stuff. And in my opinion, this kind of thing gets me just as excited as the starting characteristics of an Italian supercar. Because with this, you know you’re about to set off on an epic journey.

If it’s aural pleasure you’re after, the induction noise is to die for. There are so many different phases of sound as the engine climbs and soars through its rev range. Down low it produces a deep and growly bark. And then through the mid-range there is a distinct wail, synonymous with Porsches. Keep it pinned and you’ll experience the spine-tingling high-pitch scream as it approaches the 8000rpm redline. 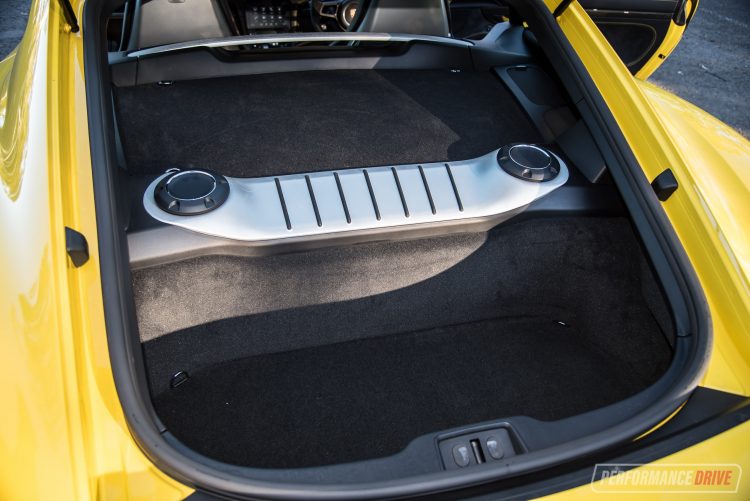 So, what is this engine? Well it’s actually based on the same engine family as the twin-turbo sixes that power the latest generation of 911 models. It’s built with proper motorsport-derived componentry and specification. There’s a high-strength forged-steel crankshaft, a special lightweight plastic sump with dry-sump lubrication, and it runs with a high 13:1 compression ratio, and of course direct injection using the latest piezo injectors.

There’s also plenty of cutting-edge technology built into the unit, too. One of the highlights, in our opinion, is an innovative adaptive cylinder control system. It allows the engine to run on one cylinder bank, essentially as a three-cylinder engine. The clever computer ensures the active cylinder bank is swapped over to the opposing side every 20 seconds, to ensure balanced engine loads and flow through the catalytic converters.

Obviously this is only engaged during low loads and demands, between 1600-3000rpm, and requirements of only 100Nm or less. But what it does is reduce overall CO2 emissions by 11 grams per kilometre. It also helps to optimise fuel consumption. On paper though it is disappointing to see fuel consumption climb from 10.3L/100km in the old 3.8L model to 11.3L/100km here, and average emissions are up from 238g/km to 258g/km. Some of this is due to new, more realistic fuel testing measures coming into effect from September 2018, switching from the old NEDC protocol to the new WLTP testing scheme. Even so, the new model is rated 10.9L/100km under the old NEDC setup. 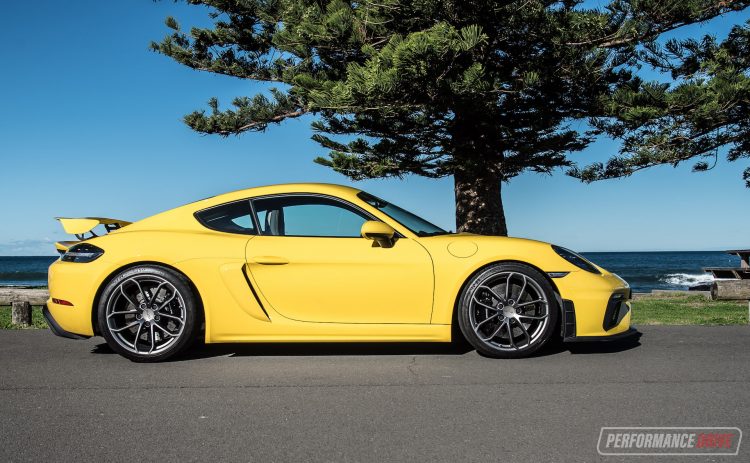 According to Porsche the latest GT4 will cover 0-100km/h in 4.4 seconds. Despite offering 26kW more power than the previous model, that’s the same claimed sprint time as the old model. We’re assuming this is due to the new version weighing around 88kg more than the predecessor. Flat out, the new model offers a top speed of 304km/h, up from 290km/h in the previous model.

During our testing we recorded a best 0-100km/h in 4.49 seconds, and 0-200km/h in 14.30, with the quarter mile covered in 12.60 seconds. These figures aren’t particularly impressive for a modern high end sports car. For example, the new Toyota GR Supra does 0-100km/h in a real-world 4.38 seconds (according to our tests). Straight-line acceleration is not what this car is primarily about. In saying that, Porsche has just announced a PDK dual-clutch automatic option which slashes the claimed time down to 3.9 seconds. 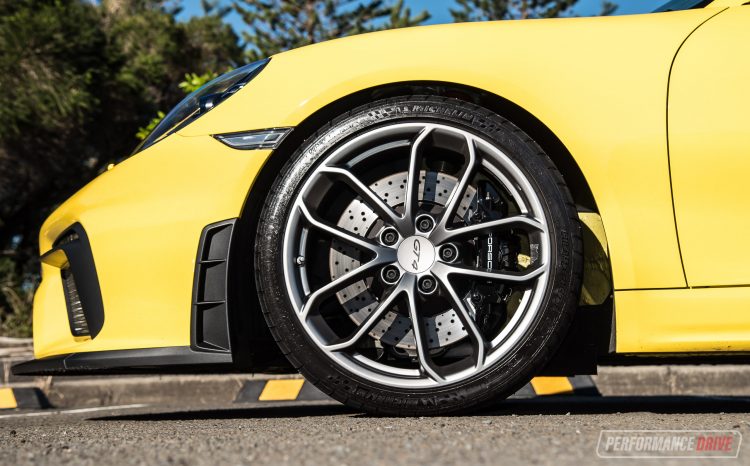 What this car is about is cornering. The electromechanical steering features a variable steering ratio (between 17.06:1 to 13.15:1), providing pure connection and engagement at all times. At low speeds it doesn’t require many rotations to turn sharply, while at high speeds it’s not as touchy but still very reactive and precise.

Combined with that glorious engine and the reassuringly mechanical manual transmission shift action, you’ll left with a device that you just want to drive and drive. We took this example for a run down one of our favourite mountain test routes and it performed brilliantly. The low-end torque from the engine is surprisingly strong for a non-turbo unit, and the grip from the 245/35 front and massive 295/30 rear tyres is immense.

You can carry big speed into corners and there is just no sign of understeer at all. The front end bites hard yet feels light (a full tank of petrol makes a difference), and there is always plenty of feel and communication coming back through the steering. Rear end traction is also rock solid, partly thanks to the weight of the engine sitting right near the rear axle, and also thanks to that massive wing (at speed). But it’s not all heads down and no games. 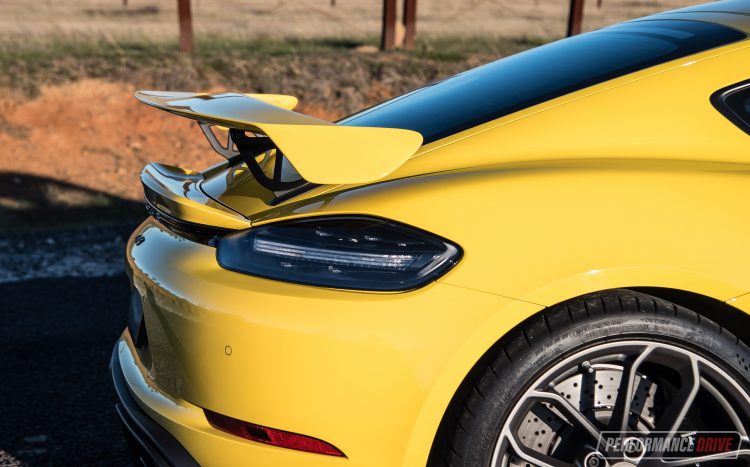 Dial in that direct steering quickly into a corner and get onto the power early, before the apex, and it will kick the tail out. Being a naturally aspirated engine, the power and torque delivery are linear and progressive. That means there are no surprises during a drift. The harder you push the go-pedal, the bigger the slide. It’s as simple to execute as it is to construct in your mind.

In some ways it’s not actually that rewarding to drive. If you want it to do something, it’ll just do it. The skill is just as much from the car as it is from the driver. If you slice through a corner or set of bends really nicely, you don’t get a pat on the back. The car was there with you, essentially one step ahead. It’s almost like the Cayman says to you, ‘Of course that was perfect. What else were you expecting? Let’s do it again’.

What’s genuinely surprising is the ride quality. To be honest, we were expecting it to be rock-hard, considering its track and motorsport intensions. But in normal mode the suspension is able to absorb bumps and dips with grace and composure. Sure, it’s taut, like a sports car should be, but forgiving enough to support mountain road blasts. 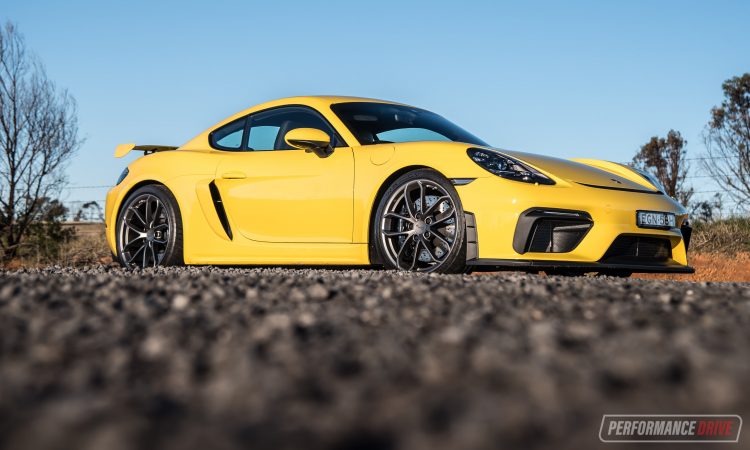 We love the engine and its cascading soundtrack as it roars through the naturally aspirated rev range to 8000rpm. And clicking through the solid-shifting manual transmission actually gives you goosebumps of utter joy. The ride quality is a lot more forgiving than you might expect, making it suitable for weekend drives, while the interior can be specified to accommodate a decent level of comfort and luxury if you want it to (through options).

So, what are the downsides? The fact that, despite extensive measures to reduce fuel consumption and emissions, the new model consumes more fuel and produces more emissions than the predecessor isn’t great. It does offer more power, but the claimed 0-100km/h time is no different either. These elements don’t sit right with us. What happened to traditional Porsche evolution? However, there are loads or other measures in other areas that make this a significantly more dynamic and better balanced driver’s tool than the predecessor. Even the inclusion of a PDK auto option is a demonstration of that. Aerodynamics is also a big leap ahead.

As we mentioned at the beginning, if you’re in the market for a track-ready vehicle that’s road legal, the Cayman GT4 is an awesome pick. Pure, unfiltered, and, most importantly for a driver’s car, absolutely captivating every time you drive it. It is a driver’s paradise. It looks pretty darn hot, too.