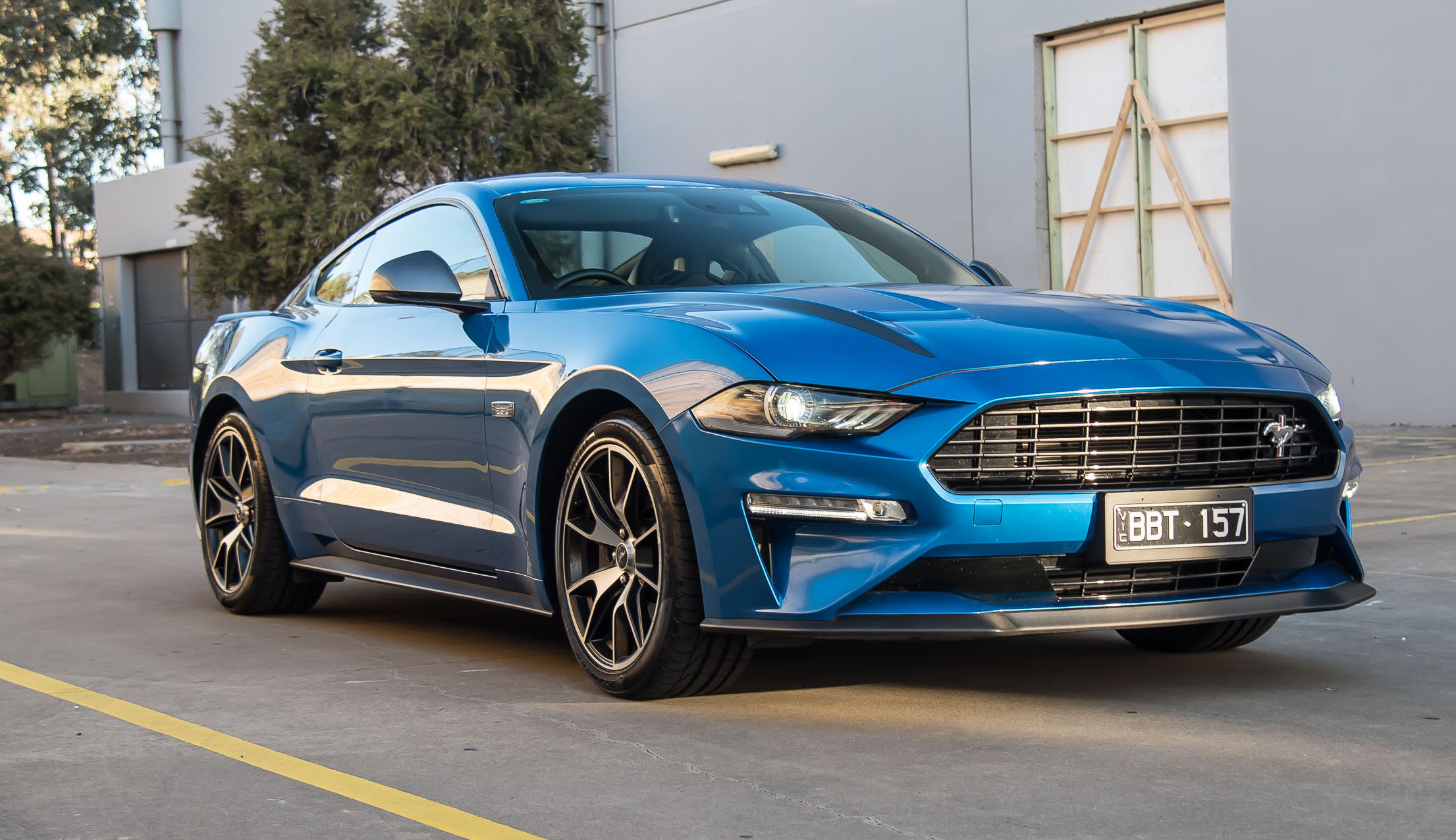 Yes, we know what you’re thinking. Why would you buy a four-cylinder muscle car? Well, on the face of it, the new 2020 Ford Mustang 2.3 High Performance represents great value for money, it looks just as tough as the V8, uses less fuel, and the performance is sports-car exciting. So maybe it’s worth a look? 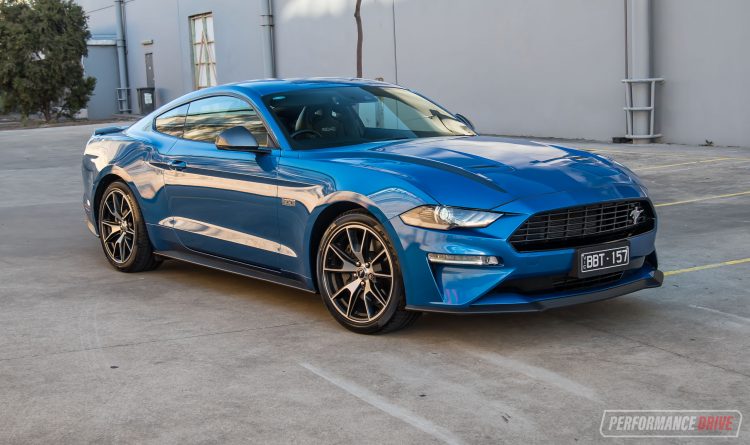 The Mustang is the most popular sports car in the world. That means, in the new car market, more new Mustangs are purchased than any other sports car. Globally. That’s a very impressive feat when you think about it. It means that whenever somebody mentions ‘sports car’, Mustang is likely to spring to the top of most peoples’ minds. 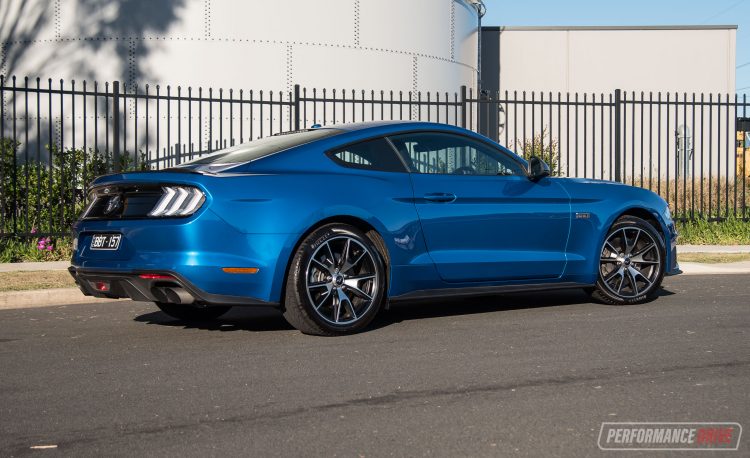 Ford made some refinement enhancements and technology updates for the MY2020, as well as tweaked the styling. But mainly, the High Performance version is the biggest news. It brings in a range of tasty enhancements. A discreet black lip spoiler is placed at the back and a black grille is fitted at the front.

Mechanically, the suspension is revised and gets thicker stabiliser bars, the weight distribution is improved (now 53:47 front:rear), and a set of 19-inch machined-face alloy wheels are fitted up. Ford says these are 9.0 inches wide on the front and 9.5 inches on the back, however, a closer look at this test car reveals 255/40 tyres all round – seems kind of pointless to have the wider rear wheels?

Under the bonnet the 2.3-litre Ecoboost turbo four-cylinder engine gets a larger, now 63mm twin-scroll turbocharger (similar to the one used in the Focus RS). This results in outputs lifting from 224kW/441Nm to 236kW/448Nm. The gear ratios for both the manual and auto have also been shortened for a punchier drive character. 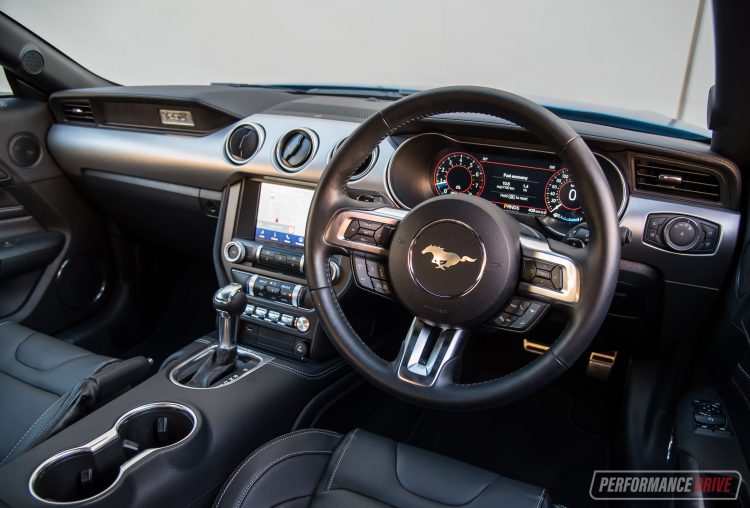 As for the interior, passengers are treated to an 8.0-inch touch-screen media interface running Ford’s SYNC 3 operating system. It supports Android Auto and Apple CarPlay. We’re not a big fan of the presentation of the menus and in-screen buttons, mainly because some of the options sprout out from random positions. Some buttons, such as the ‘source’ button, feature a very faint outline, making the overall screen seem more confusing than it is. Fortunately, you can toggle over to a darker colour theme which does help.

In all 2020 Mustangs in Australia the media system is connected up to a powerful (1000W) 12-speaker sound system made by high-end audio specialist B&O, including a sub-woofer in the boot. It’s awesome. The screen also includes sat-nav, a rear-view camera, and a display for the dual-zone climate control system. 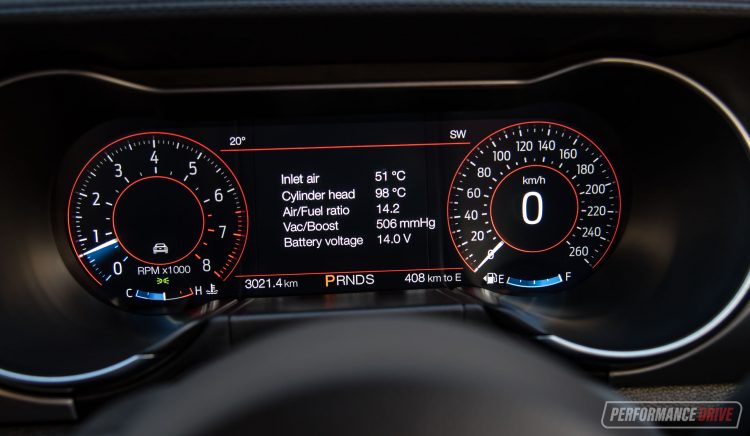 The standout feature for us is the new 12.4-inch fully digital instrument cluster. Firstly, it’s massive. It also offers a range of customisable displays and cool readouts. Some of these include a Drag Strip mode with an on-board acceleration timer, a bunch of detailed engine gauges with things like real-time temperature and turbo boost pressure, and a live tyre pressure gauge. You can spend ages just having a play around and checking out all of the info here.

Ford has tried hard to meet the latest safety standards, fitting autonomous emergency braking as standard, with pedestrian detection, lane departure warning, and adaptive cruise control. But unfortunately the big ‘Stang only manages a three-star ANCAP rating. This will deter some buyers. 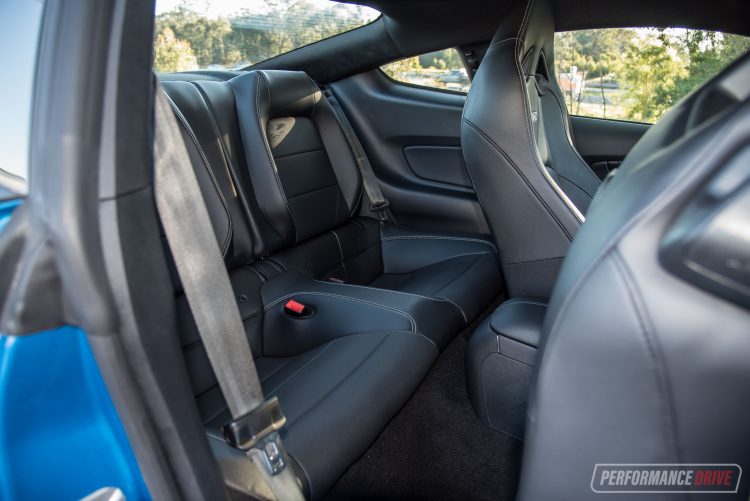 In terms of comfort and space, the Mustang is quite a big coupe. There aren’t going to be many complaints from front passengers. Not only are the Recaro bucket seats soft and supportive, there’s also plenty of headroom and the seats can slide right back to open up heaps of legroom. Visibility is okay for a coupe, but that long bonnet can take some getting used to.

Rear passengers aren’t quite as well accommodated. Legroom is only present if the front seats are moved forward at least a quarter of their movement range. Even so, the rear windscreen does sit over the rear passengers’ heads, resulting in minimal clearance for headroom and essentially no protection from the sun. Most coupes in this class don’t fare much better, but you tend to expect a bit more in the Mustang given its prominent size. On the other hand, the 408-litre boot is very decent and really supports its case for everyday practicality. 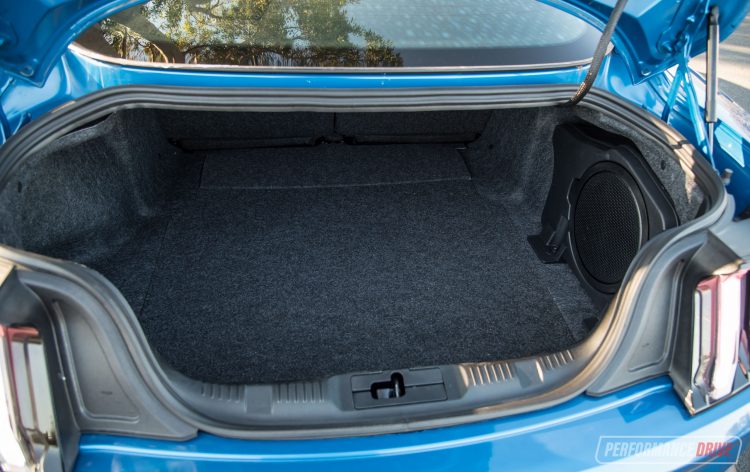 What about that four-cylinder, is it really that bad? In short, it’s not. But it depends on your expectations. Because you know this car is available with a V8 and that it is best-known for being a V8 sports car, it can impair your judgement. As a stand-alone unit the 2.3 is a cracking engine. And if you consider the Mustang purely as a large coupe sports car with a potent turbo four-cylinder, it is a compelling package.

The engine develops 236kW at 6200rpm. It’s willing and enjoys revving. Textbook sports car stuff, in other words. Being a large-capacity four-cylinder, at 2.3 litres, there is plenty of rotating mass and momentum, resulting in impressive low-end grunt and mid-range pick-up. Peak torque is rated at 448Nm at 3800rpm, which is much higher than the standard 350Nm that most 2.0L turbo four-cylinder engines offer these days. 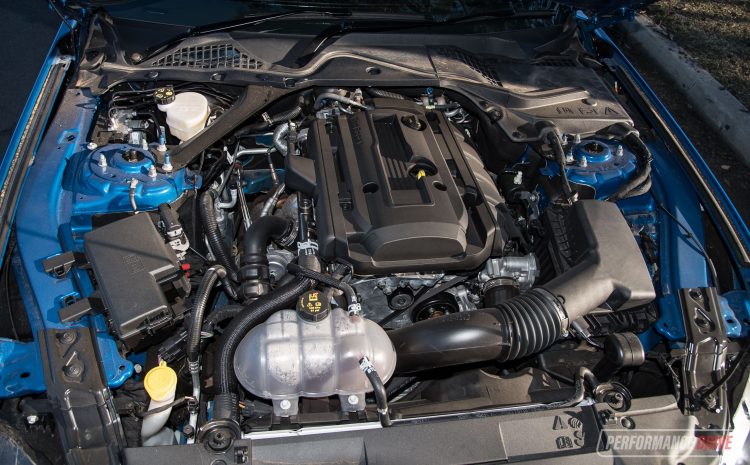 In fact, this level of torque is similar to some six-cylinder engines, including quite potent turbo ones found in other sports cars; the 3.0 supercharged V6 Jaguar F-Type 400 S offers 294kW/460Nm, the original 3.0L turbo BMW M2 offered 272kW/465Nm, and the 3.7L V6 Nissan 370Z offers 245kW/363Nm. We guess a lot of the disapproval here is simply due to it having just four cylinders, even though the figures place it much higher in the pecking order.

Across the standard acceleration sprints, on a private road with the Vbox Sport, we recorded a best 0-100km/h in just 5.58 seconds, and the quarter mile in 13.78 seconds at 167.8km/h. These are totally respectable numbers for a sports car. According to our tests, Mustang 2.3 is the quickest entry-level sports car in the class.

A class that includes mostly four-cylinder vehicles, actually. See below for a snapshot of the official vehicle category the Mustang competes in, in Australia – according to the Federal Chamber of Automotive Industries. The table also gives you an idea of just how popular the Mustang is:

Along a spirited road the Mustang offers good road-holding, with the 255/40 Pirelli P Zero tyres providing confidence-boosting adhesion most of the time. If you throw the vehicle’s 1716kg weight around you can engage in mild power-oversteer, partly thanks to the standard limited-slip differential. But it’s tricky knowing which of the 10 gears is best suited to the given situation. Third gear is usually a trusty go-to point as the engine can pull through from around 2700rpm with no trouble, yet this ratio will provide ample speed for a nice twisty road. (Ford says 90 per cent of maximum torque is accessible between 2500-5300rpm.)

There isn’t really any understeer to report. Given the four-cylinder engine is lighter in weight than the big V8, the front end can feel quite playful and responsive in comparison. Our main gripe with the handling is the steering. There is a noticeable ‘dead zone’ of play on centre, making it difficult to input precise, finger-tip adjustments. We’d like some more feedback through the steering as well. It doesn’t feel engaging enough. There’s just ‘steering’. It doesn’t do anything special or connect with any form of rapport with the driver. 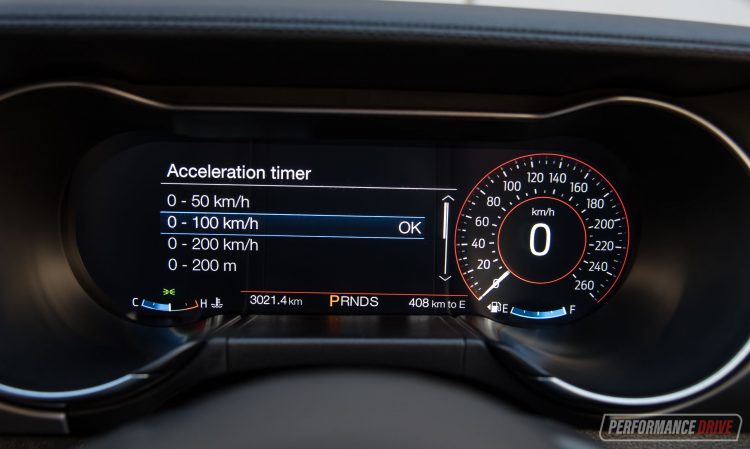 However, this is a muscle car at heart and not a precision tool like a Lotus or something of that, more focused nature. In that sense, you tend to give it some slack. Those after a bit more control can option up to the MagneRide adaptive suspension system ($2750), borrowed from the GT. Although, we don’t think that would resolve any of the steering’s shortcomings.

One of the main reasons you’re reading this and considering the 2.3 is no doubt because of the fuel economy. Officially, this auto example chews 9.6L/100km on the combined cycle. That’s a big drop down from the official 12.7L/100km average in the auto V8 (13L for the manual V8). During our test the trip computer said 10.5L/100km. We don’t think this is particularly creditable considering some of those aforementioned turbo sixes do better than that; 8.6L/100km for the Jaguar and 7.9L/100km for the M2 auto. Regardless, there is no doubt the 2.3 uses a lot less fuel than the V8. 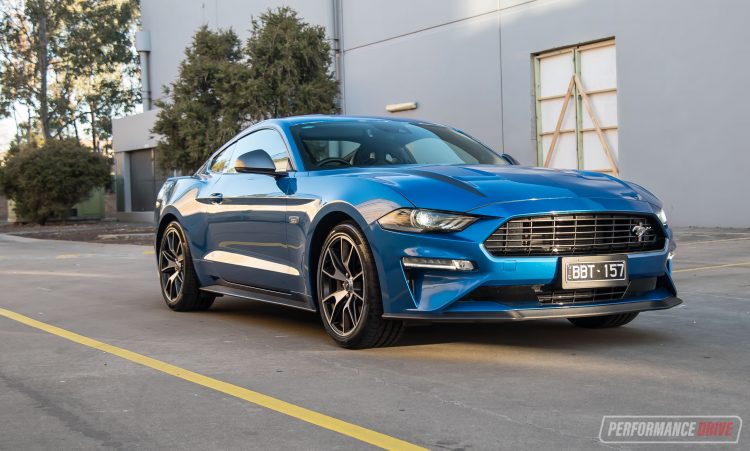 Another reason you might want to consider the 2.3 is for insurance purposes. Well, more specifically, cheaper insurance. I filled out a quick online form as a 37-year-old male, parking the vehicle in a garage and keeping all answers consistence and so on to see what the basic differences are. A quote for the 2.3 High Performance was $885.41 per year. With the same info and same insurance company, except with an automatic V8 coupe, the quote was $1467.86 per year. Almost double the cost to insure.

Sticking to costs, the V8 uses 275 rear tyres, which are going to be a bit more expensive to replace than these 255/40s. The V8 uses six-piston Brembo brakes too, as opposed to the four-piston non-Brembo items on the 2.3. As a result, we reckon longer-term servicing is likely to be more expensive in the V8. Both have 15,000km/12 month service intervals, and both are covered by Ford’s five-year/unlimited kilometre warranty.

Of course, the V8 is the one to go for if you can stretch to its price range. It is the full muscle car experience. However, the 2.3 does provide similar muscle car presence – it looks pretty much the same. The driving character is fun and the performance is impressive for its class and price range. You simply miss out on the added enjoyment of a rumbling V8. Instead, it’s more of a crackling and popping hot hatch experience.

If you’re in the market for a good value sports car that’s reasonably practical and accommodating, filled with features, and offers arousing performance, the Mustang 2.3 is a great candidate. Just forget the fact it’s available with a V8 and you’ll be right.