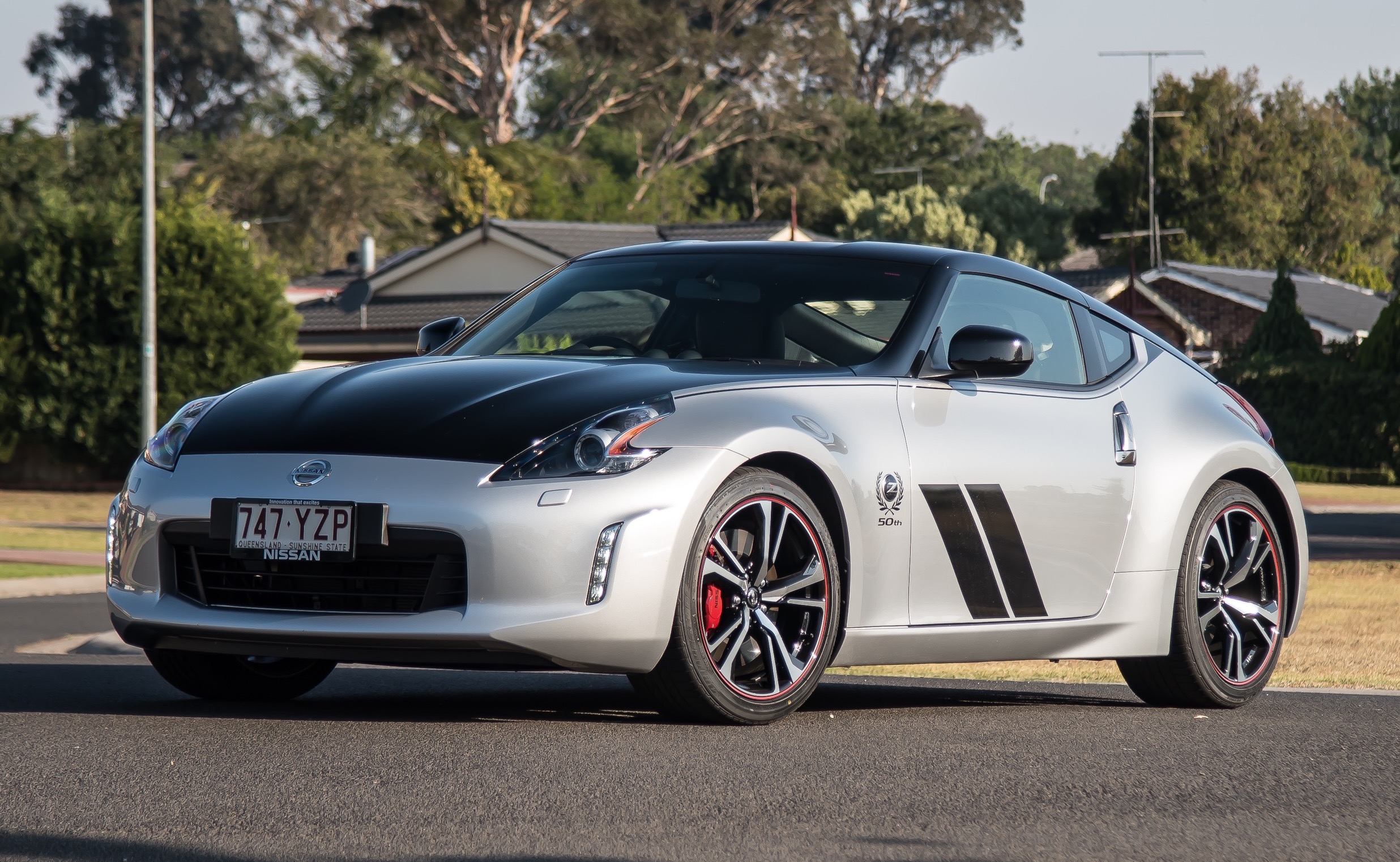 There aren’t many iconic cars on sale anymore. Not affordable ones, anyway. Most of the cool stuff has seemingly been flushed out by new crossovers and SUVs due to a shift in customer demand. The Nissan 370Z, though, is one of the rare ones. However, the 2020 model year is pretty much the same as the original 2009 version. Is there still plenty of appeal left in it? 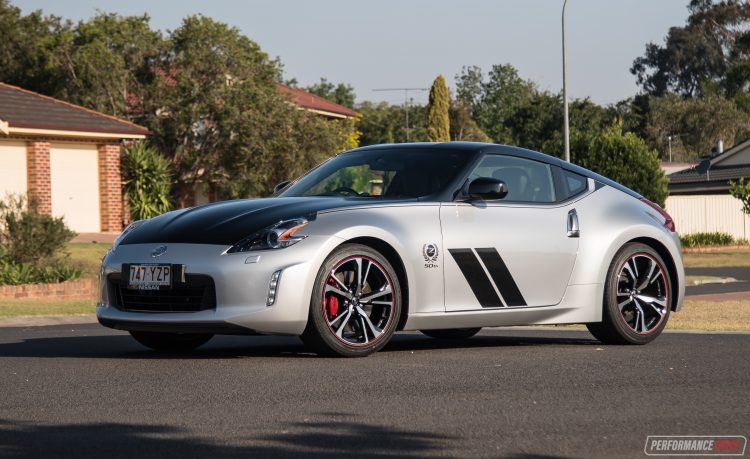 To ensure there is plenty of attraction – at least initial attraction – Nissan has given the 370Z some colourful feathers so it can draw you in, like a peacock displaying a courtship ritual. We’re talking about the 50th Anniversary Edition and its retro colour scheme. This example we’re testing here is featured in one of two colour combinations available; there’s also a red and white layout.

No major changes are made to the fundamentals for MY2020. Power still comes from the VQ37 3.7-litre naturally aspirated V6, churning out 245kW and 363Nm. It can be had with a six-speed manual (as tested) or a seven-speed automatic. Rear-wheel drive continues to ensure fun driving characteristics, with a standard limit-slip differential sorting out the left and right distribution.

Although the platform and indeed the entire package is now over 10 years old, at least Nissan has dropped the starting prices over the years. When the 370Z was first launched in 2009, Nissan Australia was asking $67,990 for the base manual. Today, the same package (with slightly more features) starts from $50,490. Going for the 50th Anniversary kit adds $3000 to the total bill. That’s a very reasonable price for a powerful, rear-wheel drive sports car. 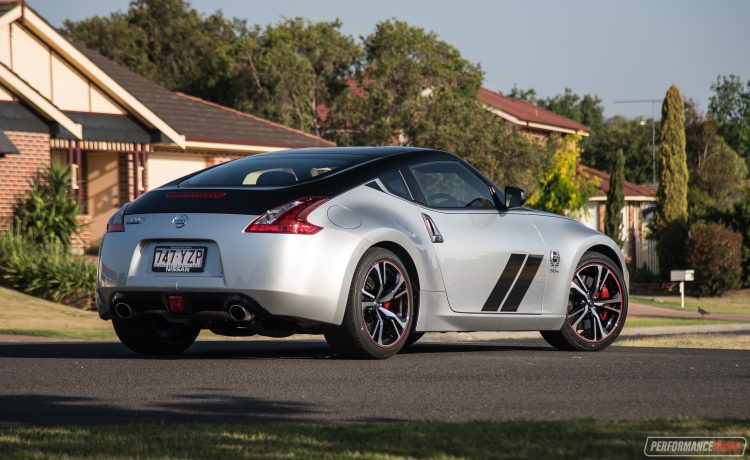 Firstly, let’s talk about what you get with the 50th Anniversary spec. For the body you’ll immediately notice the sticker pack, with its retro motorsport-inspired black bonnet, black roof and black hatch lid. These are paired with specially-painted versions of the standard 19-inch alloy wheels, with black inner spokes and a red highlight ring around the circumference. There’s also a bespoke badge for the front guard, and it is a unique logo and not just a text-based decal, with another badge for the rear.

We quite like the overall look. It seems some proper hardcore Z car fans and even fans of the 1970s and ’80s Japanese car scene have influenced the design of the pack. We especially like the black bonnet. Back in the days, racing cars and rally cars featured a black bonnet to reduce sun glare for the driver. Although, the original idea is to use a matt black coat instead of the shiny finish on this 370Z. But even still, it looks very cool and certainly attracts attention out on the streets. 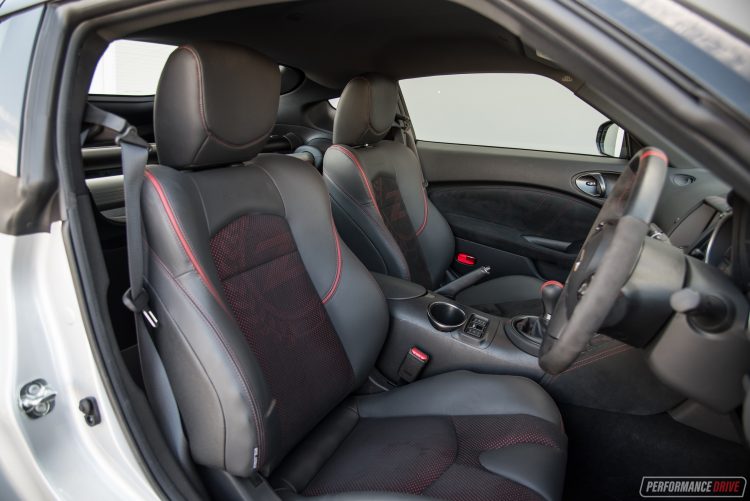 Inside, passengers are treated to uniquely-trimmed seats with red stitching and a 50th Anniversary logo. There’s also some red trimmings for other parts of the dash and door trims, and more logos for the gear shifter bezel and instrument cluster. Aside from these enhancements, the interior is exactly like the regular model, which is also exactly like past year models.

Looking at the 370Z as a modern sports car, as a product that consumers could consider, there are a few flaws. One of such is the ergonomics. The seating position isn’t perfectly aligned with the steering column, and the column itself doesn’t offer reach adjustment (only up and down). Adjustments for the seat are made via an awkward set of buttons on the inside of the seat, next to the centre console. We also get the feeling the centre console hasn’t been well translated from left-hand drive, as the cup holder, when occupied, presents a bit of a hurdle when shifting gears. 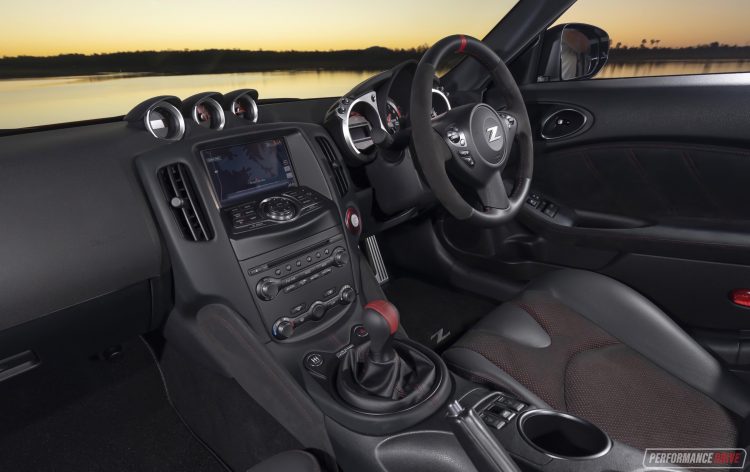 Adding more salt to the wound, the touch-screen is noticeably outdated compared with the current industry standards. Graphics, menu functionality, and sheer technology are lacking. You won’t find Android Auto or Apple CarPlay, and even the Bluetooth system is clunky. For example, we had issues streaming music from a smartphone. Lastly, getting in and out of the car can be surprisingly painful if you manage to get it wrong. How? The corner of the door is very sharp. 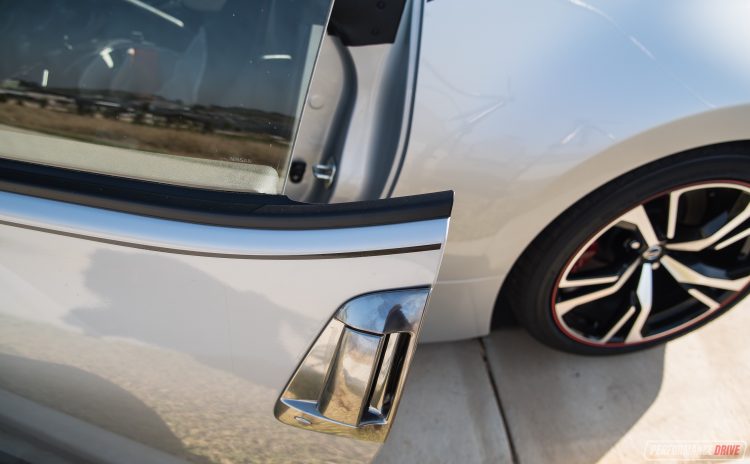 It’s not all bad, though. We think the build quality is rather good, with no trim rattles or squeaks from the cabin structure, and seriously soft door arm rests and knee pads assisting with overall comfort. Parking is helped by a rear-view camera, albeit with no front or rear parking sensors, and there is a beefy eight-speaker sound system with two sub-woofers to crank the beats.

Boot space is rated at just 235 litres, which isn’t impressive. The hatch lid does open wide and high though which makes it easy to load items in and out. The chunky bulkhead and strut brace in the back saps a lot of the otherwise available space, but it’s the lack of depth that causes most of the problem. 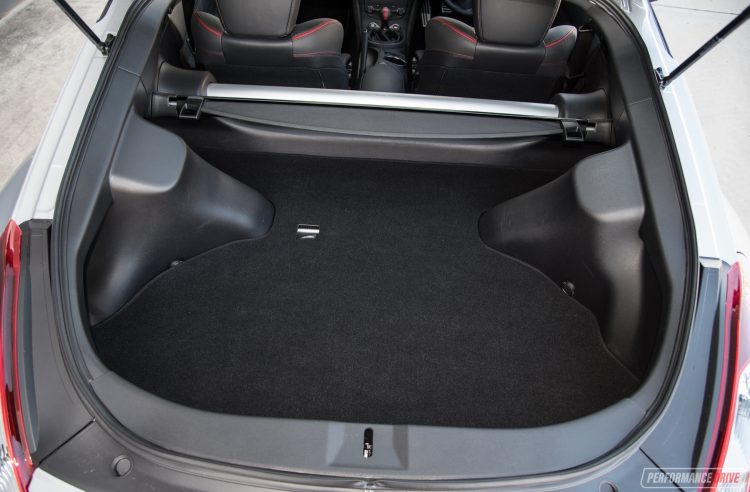 It’s so refreshing to drive a vehicle with a manual transmission. Even though we all say we want a manual, nobody is actually buying them. We get it. Automatics are much more convenient and practical. Even though it’s now against the law in some regions, you can easily eat a sauced sausage roll while driving an automatic. This is something you can do with a manual, so long as you don’t mind wearing as much of said roll as actually consuming it.

The clutch grab is really gradual and soft in the 370Z, making it perfect for first-time manual drivers. And thanks to the sheer capacity of the engine, the rotating mass and engine momentum makes it very hard to stall or kangaroo hop. We also like the short and stubby gear shifter, and the mechanical throw action and feel. It’s difficult to miss-shift into the wrong gear thanks to nicely spaced gates. However, we did suffer some minor crunching during our usual sprint tests going from first to second  gear. But it was probably more driver error than an engineering one.

Speaking of sprinting, we recorded a best 0-100km/h run in 6.20 seconds. It’s not the quickest sports car in the class, but this is, we think, the perfect level of acceleration for a raw and naturally aspirated driver’s car. It’s lots of fun without being stupid fast. Peak torque is available from a high 5200rpm, which means if you want it, you have to go and get it. Peak power is reached at a really sporty 7000rpm. Although 363Nm of torque isn’t much by today’s standards, the 370Z is comparatively light in weight, tipping the scales at 1467kg (tare). You can enjoy plenty of meaty mid-range so long as you aren’t expecting the full potential. In other words, this engine has no struggle pulling around roundabouts in third gear. 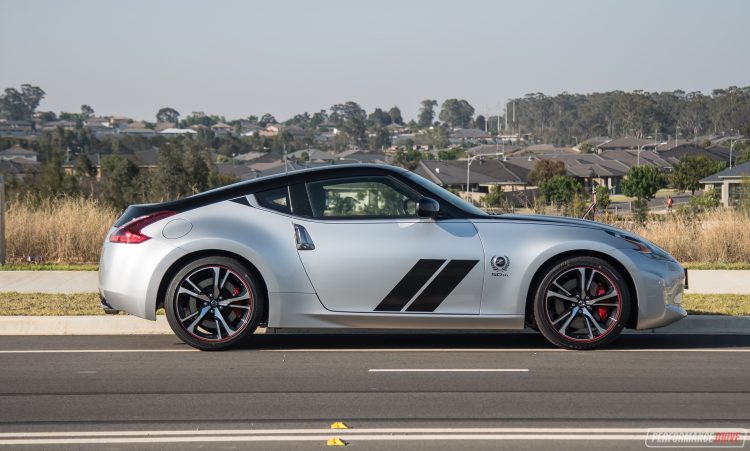 What we really don’t like during spirited driving is the fake engine sound coming through the speakers. It is really disappointing in a car like this. It tells us that there are people working at Nissan, somewhere high in the Z car development cycle, who are not car enthusiasts. This doesn’t sit right with us. For such an iconic and legendary model, such people should be banned from having a say in the program. For the real fans out there, this tech is downright patronising – we know what an engine sounds like, and it doesn’t sound like this.

We get it, emissions laws make it difficult for car manufacturers to create good sounds from exhausts. But for us that’s not the issue. An engine can be quiet yet still sound good. A 3.7-litre naturally aspirated V6 that can rev beyond 7000rpm will inevitably produce a nice noise. A Toyota HiAce V6 sounds half-decent, for Pete’s sake. Certainly better than this fake crap. Please Nissan (and all manufacturers that do it), put a stop to this stupid trend that you have created. Fortunately, at the tailpipe the noise is raspy, with a throaty roar under load. 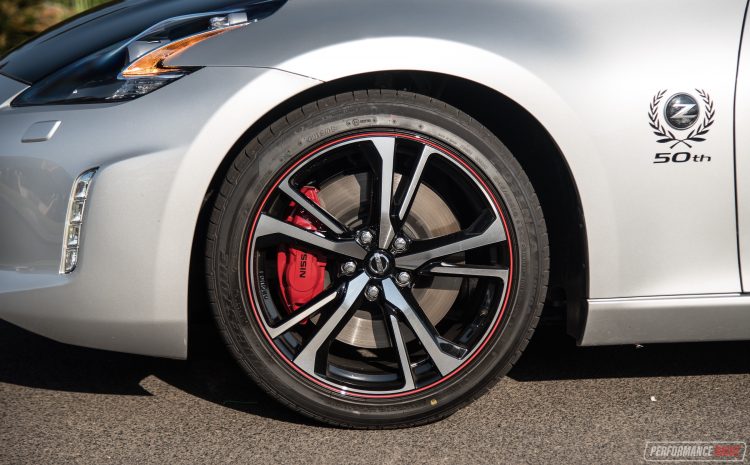 When it comes time to turn some corners, the 370Z is right up there with some of the latest driver’s cars. The chassis is very rigid and sturdy, resulting in a highly controlled feel behind the wheel. It’s not easy to come unstuck. Those back wheels, measuring 10 inches wide, are wrapped in 275/35 Bridgestone Potenza RE 050A tyres, which hook up wonderfully. Thanks to a limited-slip differential, you can of course switch off the traction control and kick the back end out too, if that’s your cup of tea. Drifting is best conducted with high revs so you can keep the slide going.

The steering feels mechanical and pure, with a good level of urgency and response. There aren’t too many turns lock-to-lock either, so it can be comfortable to drive on the highway. Engineers have created a beautiful balance between ride and handling with the suspension as well. It soaks up bumps without disturbing the car’s direction, or your organs, yet there is very little body roll. Understeer is only present when you push too fast into a corner with some power down well before the apex. Driving it properly and you won’t experience any.

Driving the 370Z 50th Anniversary edition around town is pleasant, and there is some level of theatre to be experienced just by the seating position and low-slung nature of the car. The special colour scheme no doubt attracts attention from onlookers, helping to give you a little self-esteem boost. It’s nice.

Yes, you can buy faster sports car in this class, and more modern ones, and ones that offer superior practicality, technology, and safety.. However, the 370Z, particularly in 50th Anniversary form, is a rare product. It’s filled with heritage and pedigree, to a degree that most rivals aren’t able to boast. The starting price also puts it at a very tempting position – and there is a chance this could appreciate in value in years and decades to come if you keep it in good condition.

As far as we know Nissan is slowly working on the next-generation Z car. But it’s not set to arrive until at least later next year. It will probably come with a turbo engine with a lot more power, but it might not be available with a manual, and certainly won’t offer the raw and natural driving character of this old girl. We’ll have to wait and see to know for sure.