Renowned BMW tuner G-Power is planning the mother of all tuning packages for the BMW X6. Called the G-Power BMW X6 Typhoon RS V10, the SUV is set to produce over 900hp (671kW) and become the fastest SUV in the world. 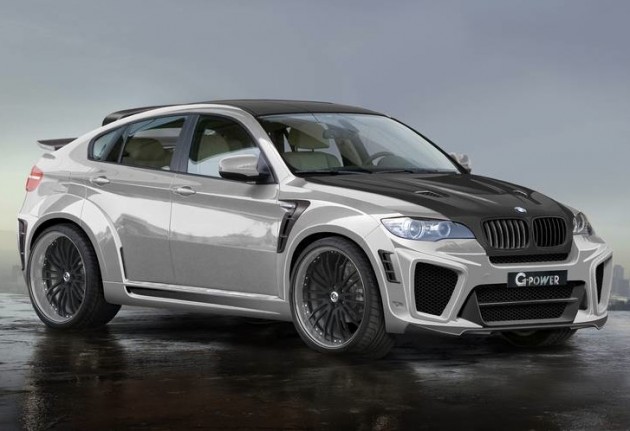 Judging purely by this teaser sketch, the BMW X6 Typhoon RS V10 certainly looks like it’ll be the most aggressive SUV in the world. G-Power is planning a comprehensive bodykit with new front and rear bumper bars, carbon fibre spoilers front and back, and a set of super-fat alloy wheels.

Under the bonnet is where it’s most impressive though. G-Power will fit the ‘S85’ 5.0-litre V10 engine taken from the previous generation BMW M5. Capacity is taken out to 5.5 litres. In case that’s not enough, two ‘ASA T1-316’ superchargers are nestled in between the cylinder banks.

To ensure the engine can maintain such high pressure and extreme performance, G-Power also fits Mahle forged pistons with a lower compression ratio, a water-to-air intercooler, and a completely revised engine computer and fuel management system.

The company estimates an overall power output of 671kW and a whopping 870Nm of torque. Interestingly, the RS V10 won’t be all-wheel drive. Instead, G-Power will remove the xDrive system and simply transfer the power to the rear wheels only.

In other areas, the Typhoon will come with 410mm carbon ceramic front disc brakes with six-piston calipers, and a custom lowered suspension package. The new brakes are not only more powerful than the standard items, they are also 50 per cent lighter in weight.

Just five examples of the monster machine will be made. G-Power managing directors Christian Stober and Zoran Zorneke recently spoke about the upgrade kit, saying,

“The intention behind the G-Power X6 Typhoon RS V10 is, besides the aim of building the world’s fastest SUV, to create a vehicle to do homage to M GmbH’s fascinating V10 power unit.”